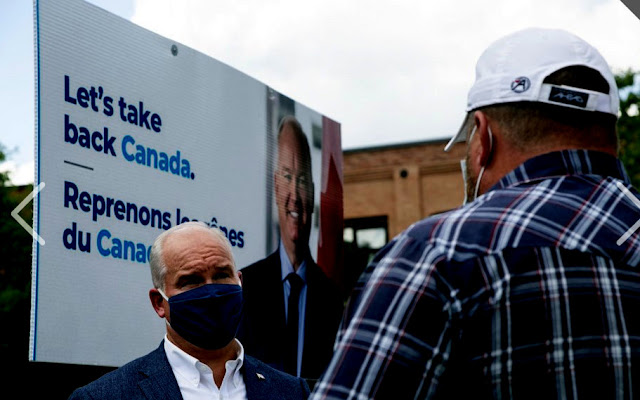 The other night as I watched Donald Trump's acceptance speech I was struck by how many words Erin O'Toole has borrowed from him.
Words and phrases like "Take back Canada" "cancel culture" and many others.
It made me wonder why O'Toole would want to be Trump's parrot?
But it does explain why he wants to dismember the CBC. 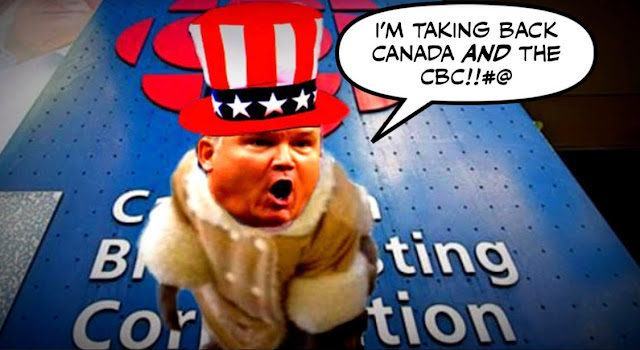 Not just to pleasure his rabid base.

The entire plan is, of course, a sop to Conservative CBC-haters. They are noisy and go about the world – well, Twitter – convinced that Rosemary Barton is in love with JustinTrudeau and that, as a result, all CBC TV News is biased.

But also to cancel our culture..
This country needs a national public broadcaster in the television arena. It’s not about choice, it’s about cultural safeguarding. We sit next to the culture behemoth of the USA and Canadian TV storytelling would wither and die without a public TV broadcaster.

So him and his Canada hating Trump cult can turn us into a pale copy of ugly America.

And if there was any doubt that the Cons are now a Trump cult, here's their shadow environment minister Kerry-Lynne Findlay, trying to smear Chrystia Freeland for having once interviewed the billionaire philantropist George Soros. 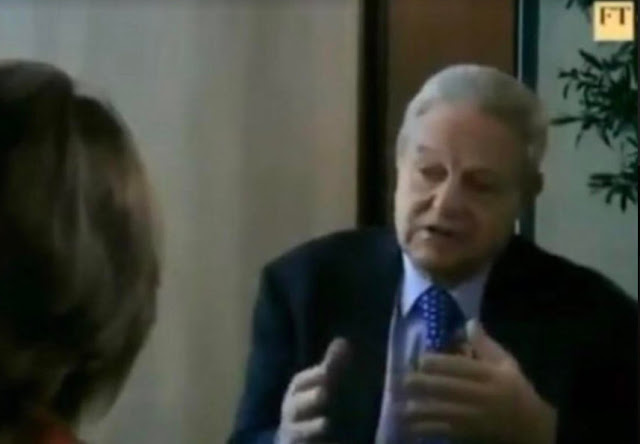 She was forced to apologize.

Soros, who is Jewish, is a frequent bogeyman of conspiracy theories from far-right figures in the U.S., his native Hungary and beyond.

But by then Pierre Poilievre and others had retweeted her offensive far right tweet, and it does show how the Trump cult has infected the Cons and is debasing them further, if that's possible.

It also helps explain why just like in Trump's America, the religious  right has also infected the Cons, so much so that O'Toole doesn't dare fire the SoCon bigot Derek Sloan.

In her letter, the Oakville North-Burlington MP said if O’Toole failed to remove Sloan from caucus, it would be akin to condoning statements Sloan made throughout the campaign that she called examples of “racism, misogyny and bigotry.”

Even though Sloan is a ghastly racist who suggested that the decent Dr Theresa Tam was working for China instead of Canada... 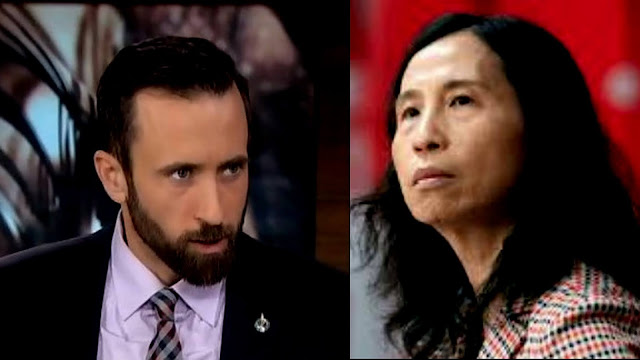 As well as a hideous misogynist who doesn't believe women should control their own bodies, and a vile homophobe who suggests that gay people choose who they are, and it's OK to torture them to make them "normal."

And is now accusing the Liberal MP, Pam Damoff, of being an ISIS supporter.

While his supporters attack her as only members of the Trump cult could.

Today’s Erin O'Toole's 4th day as Leader of Conservatives. I called for Derek Sloan to be removed from their caucus for his hateful comments. So far nothing from Mr. O'Toole but here’s some responses I did get. Erin, do the right thing and take a stand against xenophobia and hate pic.twitter.com/8LyGyAbVt7

And O'Toole, who likes to call himself a "True Blue fighter," is showing himself to be a True Blue mumbler.

During a press conference Tuesday, O’Toole was asked about Sloan’s controversial comments, especially those directed at Dr. Tam, but declined to say whether he would expel the rookie MP from his caucus.

O’Toole said pressures of a leadership race can bring forth a “contrast of ideas,” but under his leadership, the Conservative Party will be united.

Or just running for cover... 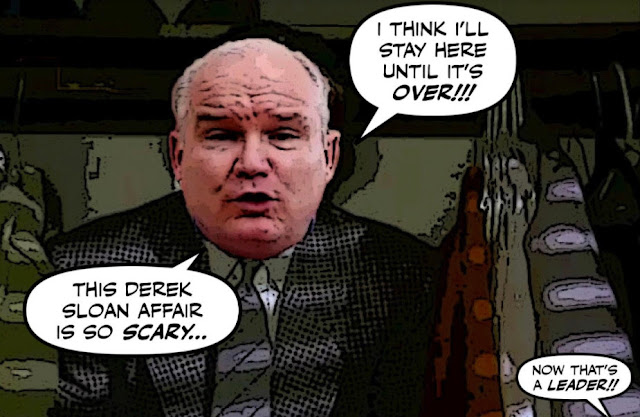 Finally, let's not forget how Andrew Scheer waited until his very last hours as leader to reveal his far right views. 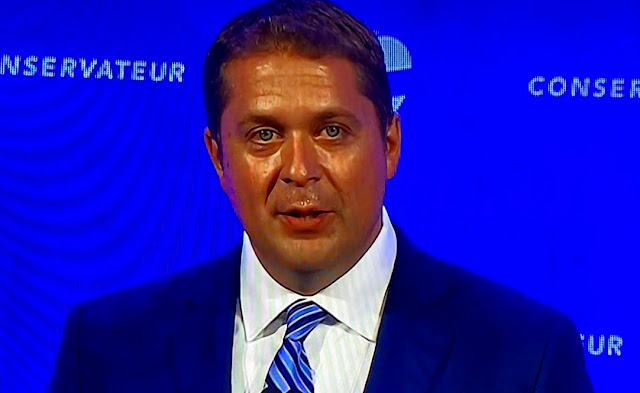 In the 1980’s, the Soviet Block and Eastern European countries all had the same rhetoric – their polices were supposed to help the poor and promote equality – the exact same rhetoric that the left is using today. But all it caused was misery.

Which turned out to be such kooky stuff it made Scheer look like a Cold War warrior...

After all, nobody ever got shot trying to jump the wall into East Berlin or paddled a raft to get to Cuba.

We don’t even have to go back into the past to see these examples. Look at the mess in Venezuela.
And a member in good standing of the Trump cult...

O'Toole is just more of the same. He's making it even clearer that the Cons are slowly but surely becoming more American than Canadian.
And that if we don't defeat them in the next election.

They will take back our country, and we will miss it forever...

Simon, check my site for a write-up on the Soros tweet, because I don't know how else to send you the screenshot I saved of Skippy's previous anti-Semitic tweet about Rob and Katie. I've been monitoring the QAnon phenomenon making its way into the U.S. Congress for some time, now having reached Canada's Parliament. What I've found is that "Eric" is leading a continuation of the tin-foil-ization of the CPC, in particular Scheer's dog-whistling about Trudeau "corrupting youth". Which itself is a continuation of the pattern of how he won his seat in the first place by smearing Lorne Nystrom. The man is an absolute pig, and I say that with apologies to pigs.

"Trudeau benefits from his access to youth" was Scheer's coded messaging about WeGhazi way back in early July. It was also what that creep who went after McKenna yelled into her office intercom, where he accused McKenna of covering up for Trudeau the pederast who uses the charity events to have "access to kids". Now it's come to this, about Freeland and George Soros. And recall also that Scheer winked to Pizzagate last year. Error O'Foole is exacerbating the sickness with Kenney and Ballingall backing him up. But the rot was already there.

All of the Pizzagate and Soros stuff has been enveloped into QAnon, and now Skippy and the Tool are the latest to carry it onward, with sidekicks Sloan and Lewis (and apparently a lot more, practically the entire caucus). I have been saying for years that the same messaging as the Republicans used to attack Hillary Clinton, the Cons at all levels are using to attack Trudeau, and additionally the rest of the LPC. Their targets are set on Freeland now because she is the presumed Trudeau successor and because Putin hates her guts.

Don't forget also that on the other side of the horseshoe the NDP smears Freeland as a Nazi sympathizer. And also in my article is a reminder that Harper and IDU are connected to Viktor Orban, who is leading the anti-Soros charge internationally in his native Hungary. This is not isolated and it is not limited to Canada. But it has unfortunately made its presence publicly known.

You folks need to do something to force this hate group masquerading as a political party to disband altogether, because the QAnon takeover of the GOP is really an ugly sight to behold. The once honorable party of Joe Clark, Hugh Segal and Robert Stanfield is an irredeemable cult of Internet shitposters, conspiracy theorists and the Nazi-curious. Dumbo MacKay might have lost the leadership but this is the legacy -- through the merger with Harper's crackpots -- that he leaves behind. Everyone in this modern day version of the NSDAP should be barred from Canadian politics for the foreseeable future.

The Scheer Cons would have people believe that being anti communist is the route to prosperity. In reality their divisive, oily, biblical, "take Canada back" rhetoric will drive capital investment away and make most of society poorer. Investors are looking for countries and industries with progressive ESG scores ( environmental, social, governance ) not banana republics with threats of regional separation, war rooms, and high carbon content industries travelling backwards in time.

Hi Steve....I’m not quite sure what you’re saying, but it sounds ominous. I’ll keep my suitcase packed Abdul get ready to leave for my cave in the Scottish highlands even if I have to swim there...😉

Hi Jackie ...I’m sorry I took so long to get back to you , but I had to go up and close my uncle’s cottage after having used it for a grand total of four days this season. But I did check your site and I saw Poilievre’s grotesque tweet. The man is a low creature, and I suspect the pandemic has exacerbated his mental/bully problems. I believe he is seething with frustration for having had to bow out of the leadership race, for the reasons I wrote about. More on that later. But all this weird shit will only damage the Cons in the long run, and make it clear that they are now members in good standing of the Trump cult , and sooner or later that will kill them...

Hi RT....Ever since their Lord Trump starting calling China, “Communist China” the Cons have started to sound like Cold War warriors . It’s absurd considering that China is in my opinion a lot more capitalist than communist, But whatever...as you say, the Cons would turn us into a grubby oil state completely out of sync with the future. Just one look at Kenney’s Alberta should convince any sane person that oil is withering on the vine, and we need to move on urgently. But that’s what makes them Cons...