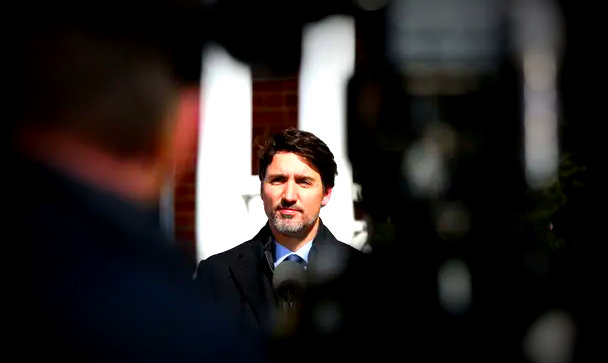 Justin Trudeau was already going to be known as a great Canadian prime minister.

The way he defeated first Stephen Harper, and then Andrew Scheer, and the magnificent way he has managed the pandemic have earned him his place in history.

But what he is working on now, could make him the GREATEST prime minister ever.

For this is incredibly exciting.

Canadian Prime Minister Justin Trudeau is weighing sweeping changes to the country’s social welfare system and a series of economic measures that will align Canada with ambitious climate goals, according to people familiar with the matter.

“The prime minister wants to go big,” said a government source, adding that Trudeau, 48, sees the moves as part of his legacy.

The time is right. It's time to big or go home. These words are music to my ears.

Trudeau said the pandemic had unmasked “fundamental gaps” in society and the country needed a long-term recovery plan that addressed issues head on.

And I'm glad Trudeau had the guts to prorogue parliament even if it triggers the ghastly bully Pierre Poilievre. 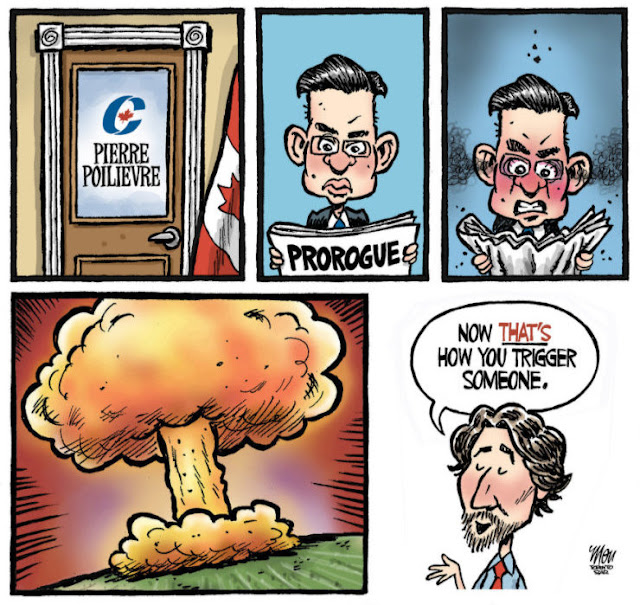 And if the opposition doesn’t like what’s in that package, and prefers scandal mongering to fighting the pandemic, they can always bring down the government and go for an election. But knowing them I doubt they will. pic.twitter.com/bNirgY4j6O

If the opposition wants an election in October, I'm more than ready, even if they are not.

I'm not worried either by those who are scared by the big numbers involved, since thanks to the Liberal government our economy is recovering nicely.

The Cons will still squawk like chickens, but who is going to take this leader seriously? 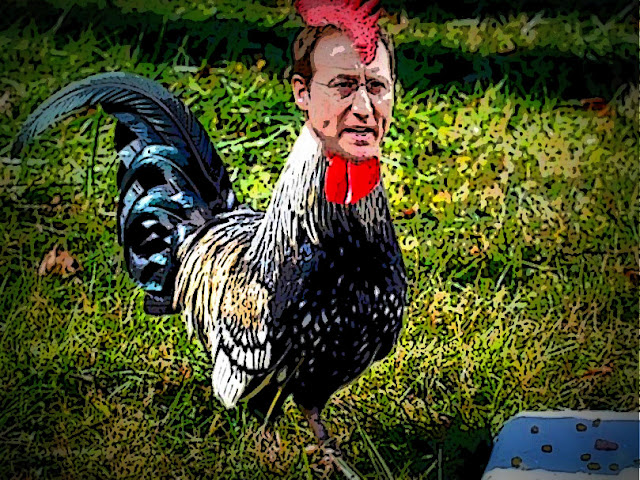 And of course the NDP won't be far behind. But you know their loser leader is only worried the Liberals will leave them with not enough policies to fit into a shoebox. 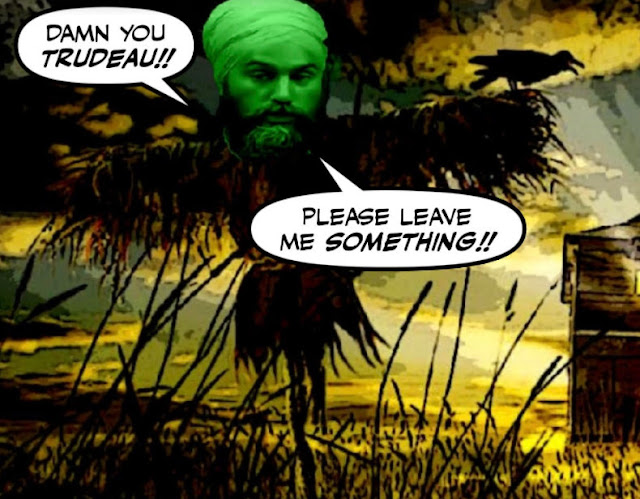 Especially since the polls are starting to show that most Canadians have had enough of fake scandals, which Singh seems to like as much as Andrew Scheer. 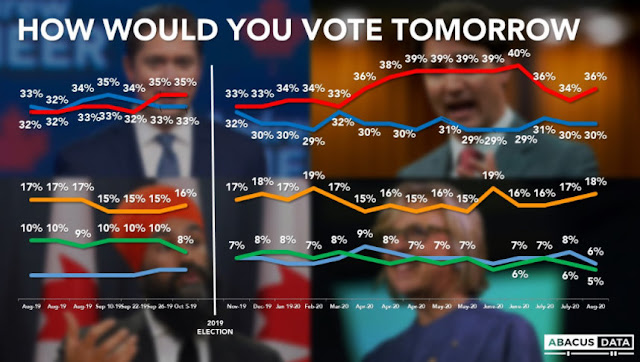 So the Liberals are starting to rebound.

And when Trudeau unveils his New Deal, it should boost his numbers even further.

As for me, I've always believed that hope beats gloom any old day.

And this weekend I'm going to let it fill me, like the wind fills these sails.

We're setting course for an exciting time, with a great prime minister.

So have a great one everybody...

Interesting that the two news articles that you link to are from Reuters, a non-Canadians news organization.

Oh, I hope I hope I hope he and Freeland and the team get to go forward with this. The NDP is maaaaaaad jealous and now some bitter gutter snipes from Morneau's old office are bitching to the press. Everybody needs to knock it the fuck off and focus on PEOPLE instead of their own selfish ambitions. The only ones I see doing that are Trudeau and the team he has now. My birthday-observed is tomorrow, and I'm going to make a big wish on the candles that Justin Trudeau gets to go full steam ahead with the Maple New Deal. I actually hope there's an early election so he can shut the petty bastards up with a crushing majority!

@Ottlib -- actually Reuters is Canadian, as it is owned by the wealthiest family in Canada: The Thomson family, who also owns the Globe and CTV. On a whim I created an org chart detailing all the connections of Canada's right-wing politico-media landscape and just how incestuous it really is, how stifling to the Liberal party and anything resembling progressive change. I'll have to convert it to a PDF or an image file, and share it here or at my blog. It's fascinating and frightening all at once.

But there must be a helluva schism in that organization, because the crack staff at the Glob & Oil are losing their shit over Freeland's appointment to FinMin and Justin's turn as FDR of the North. Ironically, Freeland herself was once an editor on their financial pages, and is now being vilified as "lacking the qualifications" for the position. One of her mentees was Heather Mallick, the sole contrarian now at the Star who has been firm in her stance that the "scandals" contrived about Trudeau don't deserve the obsessive coverage that her colleagues afford to them. She always gets proven right, yet the old-boy network and jealous mean girls in her profession level crap at her because of it. Mallick talked about working with Freeland in an interview with CBC radio recently.

Interesting to note that when Mallick was at the Globe, she published an article in 2000 about one of the K-bros winning that libel suit against Jesse Brown and Conman Black's tabloid magazine. Funny how all these pieces start to fit together and old grudges die hard.

I don't know who runs the editorial direction at Reuters, but the Globe's is run by David Walmsley, who shamefully ran an op-ed on "free speech" last year from none other than Ezra Levant. They really went down the tubes when they brought over a bunch of Postmedia rejects like Coyne and Urback. Now Postmedia (which operates Kenney's war room) is standing up for Ruble Media on "principle". Unlike the fake guilty-by-association, six degrees of Kevin Bacon crap that Trudeau is accused of, here are so many real conflicts of interest in the Canadian political media that'll never get reported, because after all, who watches the watchmen? The ToryStar, btw, has already started the gaslighting, endorsing MacKay as the "moderate" who could "take the Cons forward." One of their new owners? A donor to MacKay's campaign.

The sad thing is I learned about a lot of these connections from old articles at CanadaLand before they disgraced themselves jumping in bed with the same Con media that Brown used to criticize (and which called him out for the hack he is), until he figured out a way to get rich(er) and get a pat on the head by using his K-bros vendetta as a cudgel to attack Trudeau.

The Canadian fourth estate is corrupt. The late Chicago news legend Mike Royko used to say that no self-respecting fish would want to be wrapped in a Rupert Murdoch paper. Seems the fish in Canada's media rots from all its Hydra heads on down.

We can live in a Star Trek universe,

We are fortunate to have a safety net below us, but the pandemic has shown how precarious the highwire act is for many Canadians. We need a new programme that reacts quickly and covers more citizens. The feds have helps multiudes at remarcable speed but some have been left out The problems our present programmes have spotlight the need to improve. There's lots of research taht shows a guanteed annual income would have been cheaper and faster than the patchwork of programmes used since March.

Our assistance system has grown piece by piece over some time. Now is the time to celebrate EI, OAS, disability etc. by rolling these sucess stories into one effective and efficient programme.

Most of the Liberal caucus seems ready to improve things. The NDP espouses this idea and may end the vitriol long enough to help Canadians. Blanchet's about face may indicate his voters want more positive action and less fake outrage. The Cons won't help but who cares what a reformatory does or says. They block progress at their own peril.

Ottlib we don't have Canadian news, all US owned, Harper saw to that.

Yes the toronto star has joined the chorus. The best part is the kids know its all bull hockey

It's been awhile since I've commented, but please know I read this Blog regularly, faithfully. It fuels me.
I've been so PROUD of Prime Minister Trudeau and his leadership through this pandemic. If I look at it objectively, even now, thank God for him. He was steady when it was obvious other provincial leaders felt the same about the heavy responsibility--'better him than me'. Being in charge; He was born for it, istm. Yes, i firmly beleive he will be Canada's greatest Prime Minister.
As for Christia Freeland as Finance Minister, For anyone who missed this interview, or even if they saw it, it's well worth watching more than once, every word of it:
https://www.youtube.com/watch?v=puMBPMkT8lY