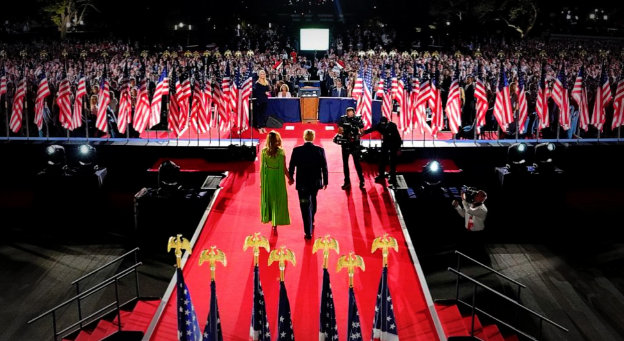 It was a Donald Trump production from start to finish. His Nuremberg moment on the south lawn of the White House.

It had more flags than even Leni Riefenstahl would have wanted, and more Trumpanzees not wearing masks than decency demanded, chanting "Four More Years, Four More Years."

And then there was the depraved Orange Fuhrer spouting even more lies than usual out of every orifice. 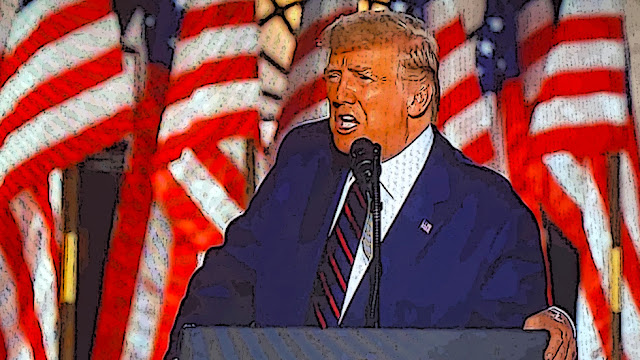 The New York Times' Frank Bruni tried to keep up with the torrent of shameless falsehoods.

I’m so relieved that the pandemic is over! I’d somehow missed that news, but then I watched the Republican National Convention, culminating in President Trump’s big speech on Thursday night, and learned that with his swift, muscular action, he’d pretty much vanquished the “China virus” and other countries wish they were so lucky. I learned that the economic toll of it was fast receding and would be a blurry memory soon.

I’m impressed: that he claimed such big-heartedness while showing such small-mindedness; that he twisted facts with such abandon and in such abundance; that he again trotted out that nonsense about having done more for Black Americans than any president since Abraham Lincoln; that he disparaged Joe Biden for not “following the science” about Covid-19 when he, Trump, mused about injections of bleach and vouched recklessly for hydroxychloroquine; that he characterized Biden’s positions as a “death sentence for the U.S. auto industry” when the Obama administration helped to save American carmakers.

And I thought he did a pretty good job, and I was glad he was as disgusted as I was by the way the depraved Trump attacked the decent Joe Biden.

When Joe Biden spoke a week earlier, he never uttered Trump’s name. Trump sure as hell uttered Biden’s, over and over, in order to call him a latent leftist or an enemy of cops or a friend of terrorists or a baby killer or the bridge to economic Armageddon or any other awful thing that popped into Trump’s and his speechwriters’ minds.

For it was truly disgusting.

But although Bruni was good, I was even more impressed with the way our Daniel Dale exposed Trump as a serial liar. Again.

Hell of a thing to watch CNN's @ddale8 fact-check the cascade of lies from Trump's speech. pic.twitter.com/aRQuHf0qE5

For it was amazing. He was so good, and as a Canadian I was so proud of him.

But I have to give Bruni the last word, for I share his fear that Trump's naked fascism might work. 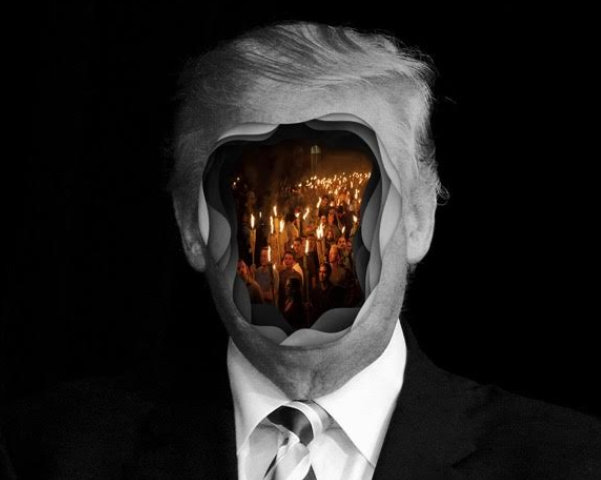 Will this mix of pageantry and prevarication work? My stomach is in knots, maybe just because the stakes are so high, maybe because Trump offers the kind of simple answers and jingoism that are often most seductive to voters, maybe because, in the midst of all the malarkey, there was a cunning recognition of where Biden and Democrats are weak.
“How,” Trump said, “can the Democrat Party ask to lead our country when it spends so much time tearing down our country?”
That’s a misrepresentation, of course, but one that will have resonance for many voters. Biden should beware of it and shut it down, lest Trump’s barely endurable speech presage a wholly unendurable second term.
And that's where we are with just over two months to go before the fateful election. And one thing is for sure.
Progressives are going to have to be tougher, smarter, and more disciplined than they  have ever been before.
For if Trump is not taken down he could take the U.S., Canada, and the whole world down with him... 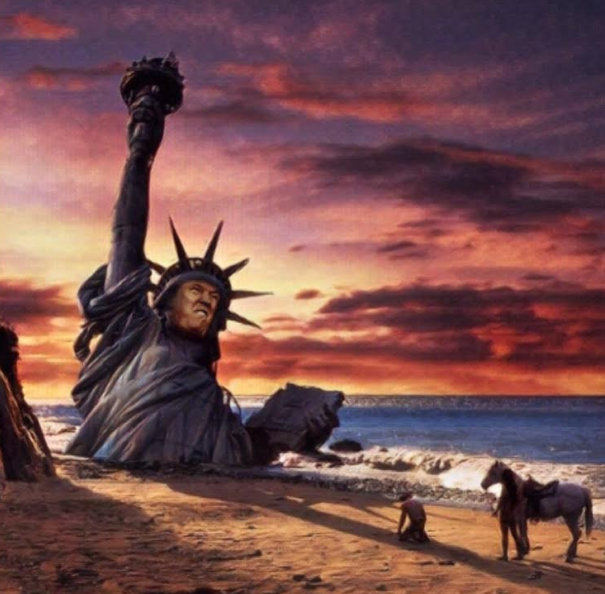 I watched some of that convention and was horrified. I was especially aghast seeing the sweaty, emotionally unstable religious hardliner rambling on with an hourlong fire-and-brimstone apocalyptic sermon about the new Cold War and the resurgence of global communism. His raging jeremiad was all about how Canada, a social democracy, is an authoritarian Soviet holdover governed by the iron fist of an illegitimate son of Fidel Castro, who has dispensed with the longstanding traditions of good government and restricted civil liberties to install himself as a de facto dictator.

Then he directed his audience to turn to "independent media" -- aka right-wing propaganda outlets -- as an alternate perspective to the fake news of the liberal deep-state lying press. Eventually I realized I had the wrong video stream playing, and it wasn't the Republican convention at all. It was Yankee Doodle Andy, letting his inner Reagan fanboy out and playing to the wrong side of the border. Not surprised, though, to see Covid-deniers and fascists in the crowd at both shitshows: Trump's Jonestown cult, and Jeff and the Tool's Proud Boys, went "mask off" in more ways than one.

Tell ya right now, though, if Agolf Twitler does manage to steal and cheat his way to a hereditary dictatorship, a bunch of us Yanks are going to have to team up with some of you Canucks, kidnap Justin and the fam, and all of us sail off to Greenland and appoint him as king for life. (Might as well call their bluff.) Then again, maybe declaring Justin as the god-emperor of the refugee colony of Greenland isn't such a good idea. At least not without a standing army. Trump did want to buy it (read: annex it) using Puerto Rico as collateral, didn't he???

That was quite a disturbing performance from Yankee Doodle Douchebag. Especially with the whole opera singer thingy at the end. Donnie and his Douchelings, hands on heart, staring at the flags, the rocket's orange glare, the bombs bursting in air, gave proof through the night that the Trumps aren't all there.
I wonder how he's feeling now that the ratings show that the Dem convention scored higher than the alt-reality shitshow from Donnie Doolittle. For someone as obsessed with ratings as he is, it will no doubt put a huuuge dent in his massive ego. I wonder who'll get the blame this time?
Biden and Harris need to step up their reality based attacks on him because as you say, failure is not an option, Simon. Trump will grow increasingly desperate to cheat his way to victory because he knows if he's booted from office, there's a whole world of hurt waiting to deservedly pounce on him. He wont be able to shield himself inside the white house and I guarantee his enablers will disown him in droves. It will actually be quite heartwarming to watch.
I firmly believe that Trump is going to lose, by a lot. His base alone wont win it for him so based on that and after 4 years and 20+ thousand lies later, I think any sane American has had enough of this despicable piece of crap.
PS Agolf Twitler. That is priceless, Jackie.
JD

Its hard to believe that in 4 short years Trump has managed to turn the US externally focused aggression inward. The strategy is one of the few options available to an authoritarian style wannabe dictator because why would a anyone want to exchange their freedom for serfdom. Compared to Canada the flip from external to internal was not that difficult because of a collectively militarized view of conflict resolution and strong uniform religious beliefs that still guide approximately 40% of the population. In comparison Canadians are less inclined to resort to military style action as a first option and only approximately 20% of the population are primarily guided by strong fundamental religious beliefs. Subversion will have to follow a different path likely focused on regional conflict rather than race. Same basic strategy of creating an internal enemy that has to be subverted just a different path. Cons always tip their hand in the language of double speak, the more they claim to have the objective of improving something the more their strategy is to subvert it. Religious freedom and fair elections are examples from the Harper years, the Tool will soon have to prioritize his own path to serfdom, all we have to do is track the number and relative intensity of the double speak.

...
Well in all this disaster there si a bit of good news for us Vancouverites and the rest of the country:

So Hair Furor has started another diplomatic incident with Canada! (You know guys, anytime you want to reenact the War of 1812 and do a pyrotechnic demo job on the White House is fine with us...)

The RNC was specifically directed NOT to use Leonard Cohen's music at their Leni Riefenstahl version of Woodstock the other night, but did it anyway. Now they're facing a lawsuit from Cohen's estate.

The polls done this week, as late as Friday , show no bump for Trump . Monday will have weekend polling and a clearer look for a post convention bounce.

Speaking of Nuremberg night, if you want to share with your twitter followers some of the images/content from my latest about the anti-Soros hatemonger Con MP, and the Trumpish rot in the Con party, feel free to do so.

I have an additional receipt in that post to back up the notion that Pigeon Pierre is, at best, anti-Semite-adjacent and at worst an anti-Semite himself. The earlier tweet was not about Soros but Telford's husband. All that was missing were the parentheses around his name.

Findlay is just the tip of the iceberg. Poilievre has a lot more to answer for than what Bernard Drainville alluded to in his interview. And to think he actually shared a phone call with Freeland, then turned around and retweeted this filth. Backstabber.

Keep pressing the media until they get Skippy to answer for his thinly coded racism. Ask your followers to send emails and make phone calls until he is called on the carpet for this. He has no shame to now face this courageous woman as shadow finance critic in QP.

Hi Jackie....I too was horrified by Scheer’s last speech, but I also felt vindicated for having always accused him of being an Ugly American, and more of a Trumpanzee than anything else. As I have also said, we really dodged a bullet, for if him and his ghastly Cons had won the last election, they would have ruined this country forever..

Hi JD....II was horrified by that Nuremberg show, but I’m afraid it made the Democratic convention look a little boring. Our side needs to find more powerful ways to get its message out. Where is Frank Capra when we need him? Trump is about to make the Democrats look like rampaging anarchists trying to burn down America, and if we can’t produce a narrative to counter that I’m very afraid that Trump could win. He is using the Hitler playbook and in a country as polarized and as violent as the U.S. it just might work again...

Hi RT.....I suppose I should be grateful that Trump is directing his aggression inwards rather than externally. When he first came to office I was afraid he might set the world on fire. But of course now I’m afraid the fires he is setting could set our country on fire as well. The Cons are becoming the Trump Party North, and they cannot be trusted to defend our interests if civil war erupts across the border. The next six months should test us all...

Hi a....I was very pleased to see that hideous Trump hotel go under. I believe a building with a Trump sign on it in Toronto also got a new name. Some say that Trump ran for president just to boost his corrupt family’s business interests. If so he must be very disappointed...