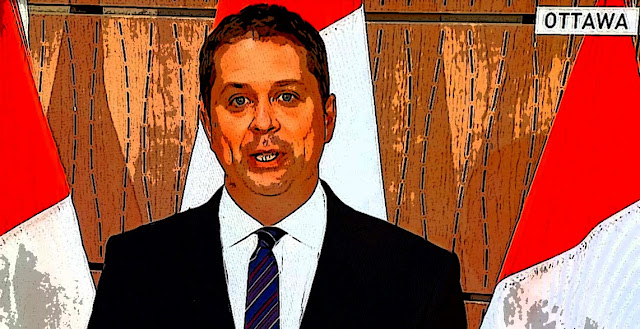 When I put on the TV to check the weather forecast this morning, I got a nasty shock. For there was Andrew Scheer looking even more ugly than usual.

He had a strange look in his eyes, and he was ranting and raving about the fake WE scandal, as only a Con, or a DipperCon, or a member of our shabby media could.

But just as I was about to change the channel, Scheer stunned me by announcing that this would be his last news conference as Con leader.

And although he tried hard, he couldn't conceal his disappointment. 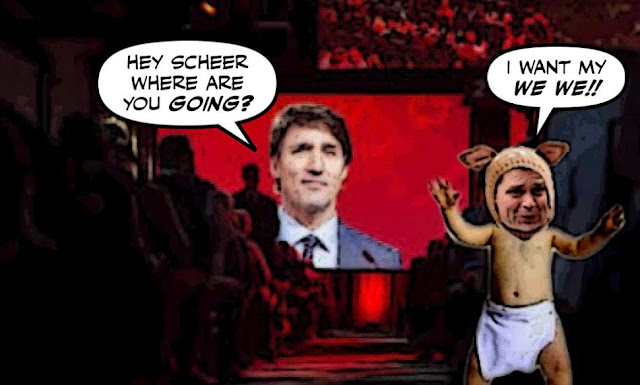 All those years trying to destroy Justin Trudeau only to fail so miserably.

For this latest Leger poll couldn't be more devastating... 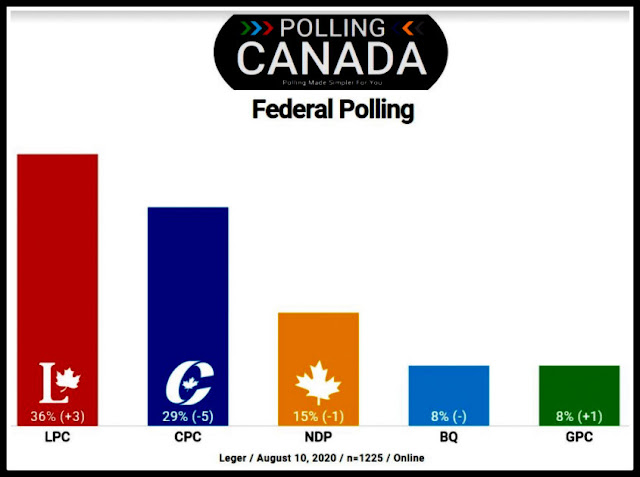 The fake scandal isn't hurting the Liberals, it's helping them and hurting the Cons and the NDP.

Can you believe it? All those creepy attack ads, all those lies, all that schmear mongering, all for NOTHING.

The Cons, their NDP stooges, and other toxic Trudeau haters were soooo convinced that this latest fake scandal would destroy him. So this must be KILLING them. Sad.

But that's the problem with fake scandals eh?

Especially when so many Canadians trust the Trudeau government to get them through this hideous pandemic. 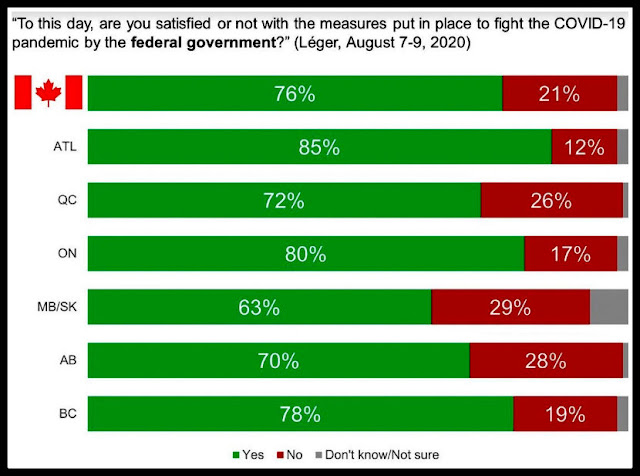 And that's the only story and poll that counts.

As for those who are hoping that Peter MacKay or Erin O'Toole might save the Cons, they also seem doomed to disappointment. 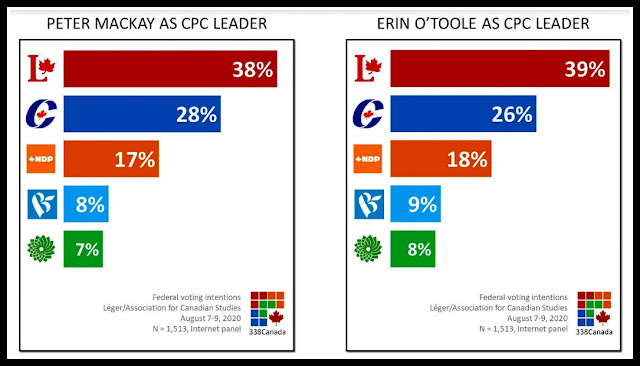 For with results like that who needs a leadership convention?

But of course that's the BEST news.

The Ugly American carved the guts out of the Cons, with his religious fanaticism, his racism, his misogyny, and his homophobia

And now he's taking the whole party down with him... 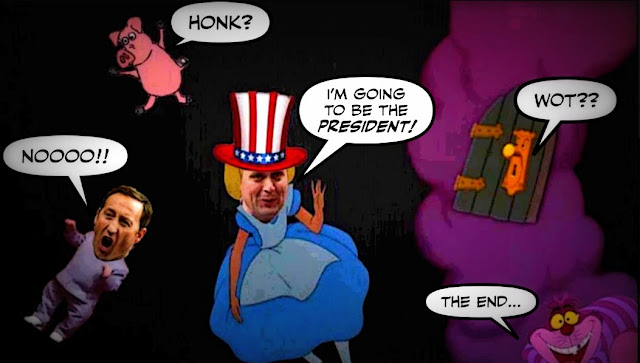 FYI that first poll image is incorrect, the current sounding is actually L36 C29, not that it makes that much of a difference anyway as the two other polls demonstrate. But I was very relieved to see it anyway, and to see that Canadians recognize that MacToole and O'Kay both suck. Nanos had good numbers this week too, even better in Quebec than the (BQ-aligned) Leger, which goes to show the power of push poll priming that Leger did the last time. Interesting to note the questionnaire this time around was about Trump and tariffs, which of course reflects favorably on Trudeau/Freeland and the feds. A dead cat flung on a table when Trudeau needed it the most.

Us Yanks did you guys a solid today, as an apology for all the suffering you've been put through with Trump. Scheer and Skippy got drowned out in the news cycle by Joe and Kamala. Not that anyone seems to have cared for anything further about this tired non-issue anyway. Trudeau's testimony looks to have been the climax. The rest is all repetitive bunk. Shugart pretty well wrapped it all up with facts, the same facts that have been reiterated for the past month in testimony after testimony and I'm sure the paperwork will bear out.
Not likely to satisfy Skippy, Scheer or whichever idiot replaces him but they're so detestable that at this point I would think/hope people are starting to tune them out.

In real news, 200,000 people signed a petition demanding Ford change his school reopening plan. That's 200,000 people at the very least who the federal Liberals can message to next election about what really matters to everyday Canadians, and why All Cons Are Bastards. There isn't enough cheesecake or Fritos in the world that can placate thousands of angry mama bears needing to protect their kids from picking up the plague.

I'm not only happy about the WeGhazi bullshit starting to fade at last, but I'm happy about Joe and Kamala today, and about seeing the Dippers shit their diapers. Cry harder, tankies. Can't wait to see a Montrealer-by-extension in the White House and the Great Reset with the cutest diplomatic double-date -- Biden/Harris, Trudeau/Freeland -- on either side of 49. Speaking of shipping, though, I'll have to check NAFTA to see if there's an Andrew Scheer amendment: how much overhead should be tacked on for the delivery rate, when factoring in the tariff cost of packing off a failed American wannabe insurance clerk to a wine cellar in Oklahoma? How much? How much? How much? How much? How much?

Wow! That's quite a change in the polls. It clearly indicates not only JT's sustained popularity, it also shows that Canadian's are fed up with the Con's feeble attempts at ramming another rotting nothing burger down our throats. We've tried them before and they are much like the party itself, tasteless, gnarly and lacking any substance whatsoever.
So I take great pleasure in seeing soon to be Homeless Andy have his final presser. He may have gone out kicking and screaming but that's okay because no one really cares to hear him go We! We! We! This little piggy should have stayed home.
JD

I just heard that the door hit Sheer-nonsense on the ass on his way out. Sad!

Also, Blanchet lol. What a douchecanoe. Is he always this impulsive or is it the cocaine talking?

Hope the NDP shoots themselves in the dick and brings the government down sooner rather than later. Liberal majority coming the same day Joe and Kamala give Trump the boot.

Cognitive Dissonance landed him in a cushy job with lifetime pay. The bigger waves are comming

Hi Jackie....Thanks for pointing out I had inserted the wrong graphic, so I could change it. I’m so beat these days I have to concentrate to think what month it is. But the main thing is that both polls suggest that the fake WE scandal is losing its traction. As usual the Cons overdid it and Canadians realized they had been stampeded for nothing. As for the NDP I have to bite my tongue these days to keep fro saying what I think about them. I can’t believe how much they mimic the Cons and I blame their dud of a leader. If they don’t get rid of him soon he will destroy my old party...

Hi JD....Yes, it was a pleasant surprise, although I did predict that the WE “scandal” had no legs. It was a smear job from start to finish, and I’m still angry that so many young Canadians had their dreams shattered because the Cons and their friends wanted to play cheap politics in the middle of a pandemic. After writing so much about Smearmonger I feel an enormous sense of relief that he is now face down in the garbage can if history. Although I will wait for the day the new Con leader is chosen for one last hopefully video goodbye...🐷

Hi Rumleyfips....Yes, the door of history gave him one humongous kick in the ass. And I’m sure millions of Canadians were extremely envious of that door, and would have given anything to have been able to give him the boot he so richly deserved. It’s going to be very interesting to see what he does now that he is no longer leader, for I’m sure he will still find a way to disgust the decent people of this country...

Hi Steve...Scheer won this first election after he accused a decent NDP MP of supporting child pornography which was a complete lie. He was one of the beneficiaries of the robocall scandal, and his election as Con leader was also tainted by corruption. So he was a corrupt bigoted skunk and the way the media covered up for him should shame those skunks forever....

This little piggy should have stayed home.

And this little piggy cried "WE, WE, WE!" as he cried getting evicted from his taxpayer funder home.