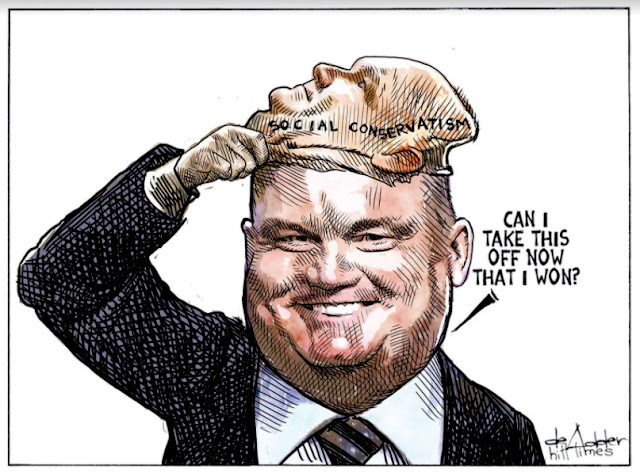 It was Erin O'Toole's first full day as Con leader, and he wasted no time trying to change his image, and trying to convince Canadians that they can trust him.

Only to end up showing decent people why they must NEVER trust him.

For after spending months appealing to far right extremists and social conservatives, and owing his victory to them.

“You'll also be hearing a lot of Liberal spin about me, in fact, it's already started. Don’t buy it,” said @ErinOTooleMP in his first press conference as Conservative leader.

For it's not Liberal spin to say that the O'Toole should fire one of the Con's religious bigots.

And it's not any kind of spin to warn Canadians that the social conservatives are now more powerful than ever.

According to the Campaign Life Coalition, the anti-abortion advocacy group recruited more than 26,000 party members to support social conservative candidates Lewis and Ontario MP Derek Sloan. “More than twice” the number of members they recruited during the 2017 leadership race, said spokesperson Jack Fonseca in a news release.

Support for social conservative candidates on the first ballot grew to 35 per cent in this year’s contest compared to 16 per cent three years ago, the group said, calling the bloc a “major and irreplaceable” part of the Conservative base.

Or warn that they are a growing threat to women, gay people, and our precious Canadian values.

And that the Liberals are absolutely right to demand that O'Toole fire the bigot Derek Sloan.

On Tuesday morning, shortly before O'Toole's first official news conference as leader of the Official Opposition, the Liberals tossed out their first challenge: the new Conservative leader, they said, should move forthwith to remove inflammatory backbencher Derek Sloan from the Conservative caucus.

For Sloan's record speaks for itself.

In January, Sloan said that the "the cause of sexual orientation" was "scientifically unclear." He later said that Liberal legislation to ban conversion therapy — the discredited practice of trying to change someone's sexual orientation with counselling — was tantamount to legalized "child abuse."

Sloan has said he believes Canada should pull out of the UN's Paris agreement on climate change and withdraw all funding from the World Health Organization. He opposes both mandatory vaccination for COVID-19 and any rule requiring Canadians to wear face masks to curb the spread of the virus

And the way he treated Dr Theresa Tam, by questioning whether she was working for Canada or China, was so rude and so racist he should have been thrown out of the caucus then and there. 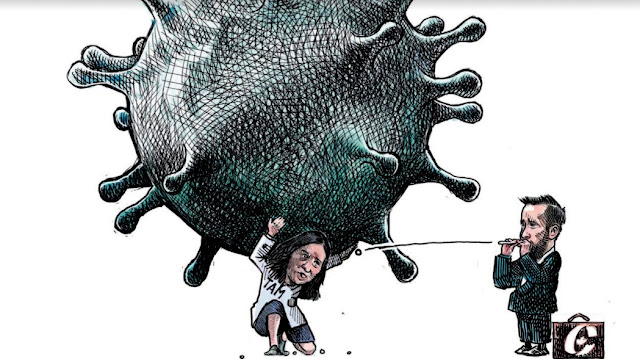 But he wasn't, and O'Toole almost certainly won't dare throw him out either, since Sloan and his social conservatives helped make him leader, and he owes them big time.

It's a depressing situation, and yet another example of how the Cons are debasing this country, and trying to make it more like Ugly America.

But the good news is that O'Toole's ridiculous Trumpling slogan "Let's Take Canada Back" might excite his rabid base, but it won't impress most decent Canadians... 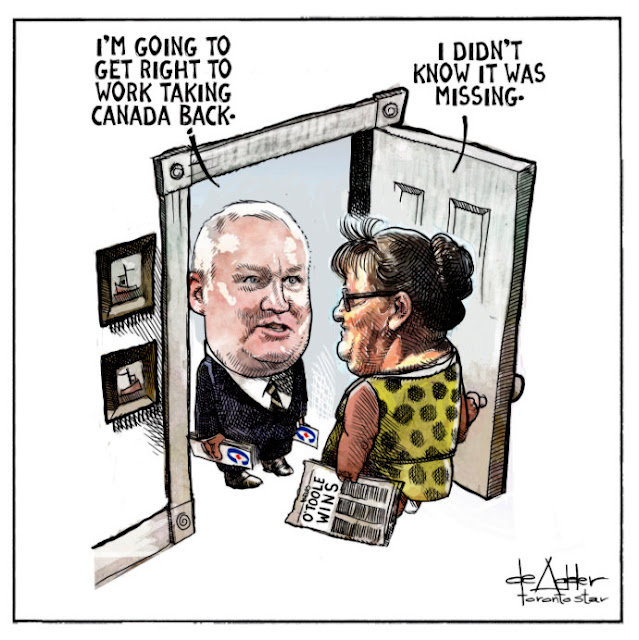 But hopefully will make many wonder whether Two Face O'Toole is either a True Blue Trumpling, or a dangerous idiot, or both.

And come to the conclusion that he is definitely not a leader any decent Canadian could ever trust.

Yes indeed, poor dumb two-faced Erin. He made a deal with the SoCon devil, because all he cared about was winning.

And it worked, For now.

But it will come back to haunt him... 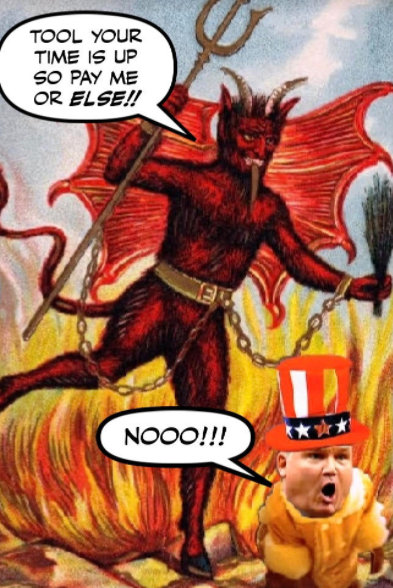 And those of us who believe in our Canada and its precious values, will use all of the above to destroy him.

And hopefully bury his Ugly American party once and for all in the garbage can of history...

I disagree, he got elected. Now he wants to be PM, he like Trump does not care about how he got here, just how he will move forward. This is a dangerous person for the party in power.

I hope the Big Red Machine is up to the task of battling Jeff Ballstothewall's disinfo troll farm and the MSM all in one. Lies and gaslighting are expected from the former, but the latter running interference for him again like they did for Scheer, is just abjectly disturbing. And don't even get me started on his pandering to gun nuts which is how he managed to win over those handful of Con members in Quebec. This demented leprechaun is something straight out of a horror movie.

BTW can someone please tell Jagmeet that he needs to pull his head out of his ass or resign. He told Vichy on P&P that the old tool "seemed to be in line with Canadians" on social issues (!!!!) but that he was "more concerned about austerity." Pathetic, rage-inducing class-exclusivist Bernie Bro bullshit that puts "economic anxiety" ahead of civil rights, which they deride as "identity politics". Women's power threatens both the Mad Men Cons and the Jacobin jocks of the NDP. Once again the Liberals are fighting a multifront war against lying, self-serving saboteurs, and too damn many of them are retrograde men like Blarney the Dinosaur here. Does it ever end?

Hi Simon, you make some excellent points on how the tool got "elected" but I have to wonder how on earth did their envelope opening machine manage to chew up 4000 ballots before anyone noticed? Did Michelle Rempel stumble into the room all liquored up and say, "oh look at all the confetti, eehaw, giddyup!" Or did they read the instructions backwards? "Step 1. Count votes(wink wink). Step 2. Shred."
JD