Stephen Harper and the Con Zombies 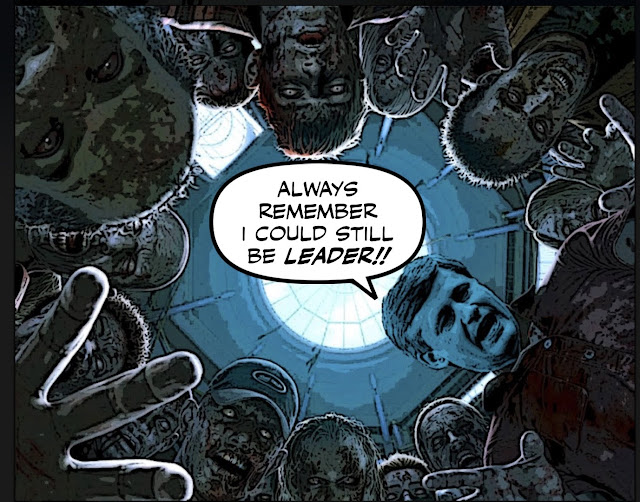 Two years ago Stephen Harper told an American audience that he could still "easily" be Con leader, but didn't want to turn the party into his "personal political vehicle."

But now he is working behind the scenes to elect the next leader.

An associate told the Star that Harper is supportive of a number of those seen as contenders for the leadership, including his former parliamentary secretary Pierre Poilievre and former cabinet ministers Peter MacKay and Erin O’Toole.

Which couldn't be more disastrous for his zombie party. 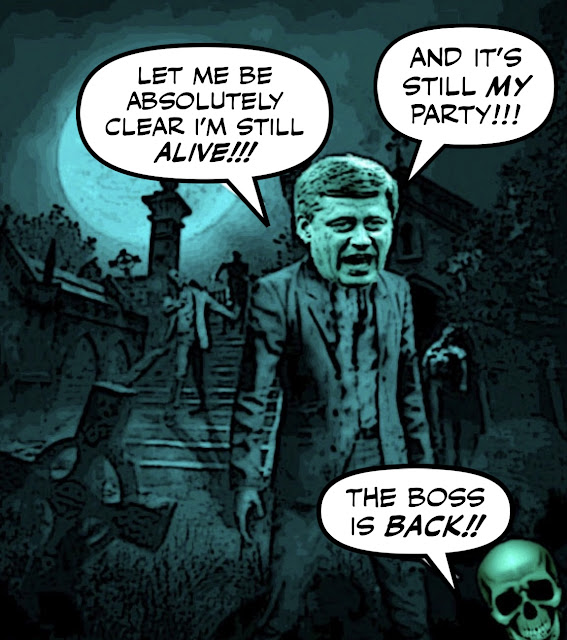 For as Michael Harris writes, the Cons need Harper like they need a hole in their bobbleheads.

For the second time in just over two years, the Conservative Party of Canada is getting a chance to hit the reset button. The first time they opted for the hapless Andrew Scheer. The choice reflected the mistaken notion that you can have change without change.

Here’s why they’ll blow it again and jam the Batmobile into reverse with a leader like Pierre Poilievre, Rona Ambrose, Peter MacKay or some other retread from the party’s glory days.

For it's still the Harper Party.

Even though Harper was trounced by Justin Trudeau in 2015, he has never really released his grip on the party he built. Far from it. Harper still pulls the strings in the party’s backrooms through his powerful position in the party’s fundraising arm, the Conservative Fund.

The Cons have never criticized him, or his failed record.

That’s the problem for today’s Conservatives. They have never rebuked Harper, his policies, his values, or his political style, even though Canadians have rejected Harperism and all it stands for in the past two federal elections.

So the leadership candidates are little more than Harper zombies, and the Cons are still trapped in the past.

Any new party leader who served with Harper will be trying to hold together his original coalition — which means never winning the country.

And for the walking dead all roads lead to the cemetery... 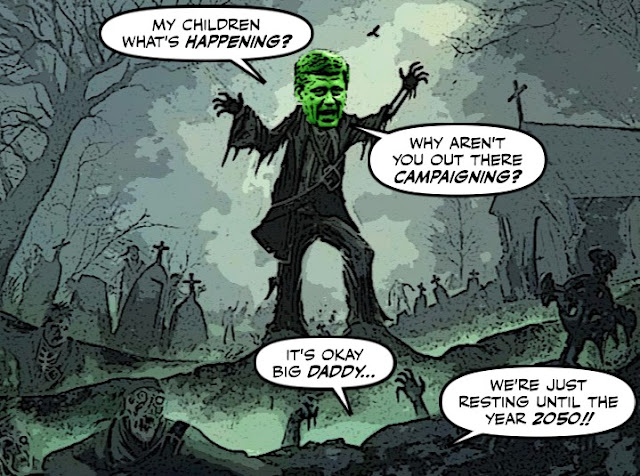 What the Cons don't seem to understand is that the Harper Party died when Justin Trudeau humiliated and buried their Great Leader.

And until the day they can rid themselves of Harper's deathly legacy, they will keep dying over and over again.

And they will not govern this country again for a long long time....

Don't forget that the Cons attracted more votes than any other party, even with a dim bulb like Scheer leading the charge. We dodged the bullet of a Con government only thanks to the undemocratic first-past-the-post system. Trudeau's going to have to up his game and deliver on his promises of he wants to keep the Cons at bay.

Wish it were true Simon but until we break up the ReformaCon propaganda empire lead by Post Media they are correct in believing that all they need is a front man who can lie convincingly with some flair. Its a tall order but media opinion pieces on anything Trudeau is over 70% negative which gives them a shot at hitting that magic 40% ballot support hurtle, if they can just get the right shade of lipstick on the right zombie. That said the Harper strategy is very clear so there are options for the Liberals to develop an effective counter strategy. Splitting up the false Canadian Post Media empire would be a good place to start. A supposed impartial Canadian board of directors does not a Canadian media company make!

No doubt Trudeau has some empathy for Harry and Meghan as regards being treated like shit by the Con papers. There were some positive blurbs from Urback and the like about his leadership in times of tragedy, but I'm sure it won't last and they'll be back to relentlessly bashing him once Parliament finally sits. Skippy and O'Fool no doubt plan to use the China committee to grandstand as an audition tape for the leader's race. What irks me more so is the fact that they have useful idiots on the so-called progressive side doing their bidding to "own the neolibs." CTV would want nothing to do with Angry Tom, nor Postmedia pump Singh's tires, if it wasn't a useful strategy to whack at Trudeau. Just look at how the Republicans and Russia are once again expressing crocodile tears for Bernie Sanders, who they know is their best bet for re-electing Trump and destroying Biden or Warren instead of Clinton. Horseshoe theory rears its ugly head yet again. Two sides of a populist jackass. Things fall apart and the center struggles to hold.

Surprise surprise, guess who's thumping the drums of war again.

This son of a bitch is a war criminal who belongs at the Hague along with Trump, Modi and the rest of the fascist pricks he emboldens with the organizational pestilence that is the IDU.

Harper is already preying upon the Iranian Canadian vote in the immediate wake of tragedy. I don't know if he or the IDU has anything to do with the social media bots screeching inanities about Sascha Trudeau working for the regime, but I wouldn't doubt it. Harper hates Justin Trudeau and the entire Trudeau family on a personal level, as evidenced by that nasty screed he penned in 2000 after Pierre's funeral as a "counterpoint" to Justin's eulogy, as though the tearful words Justin said about his father were an op-ed piece and nothing more. He is an absolute craven sociopath who will do anything for power, including exploiting the dead. The man is a menace on both a domestic and international scale who has absolutely no shame.

Iranian-Canadians haven't forgotten that it was Harper who closed Canada's mission to Iran to stoke his bromance with indicted fraudster Netanyahu. I'm not worried by whatever Harper is saying about the air crash. I am worried that Trudeau has taken absolutely no legislative action since winning the election in the fall. It's time the Libs got to work showing why they deserve to govern.

Parliament doesn't reopen until January 27th and the Liberals are having a cabinet retreat in Winterpeg next week. Perhaps they will use this time to prepare for the farcical ambush of the China committee while keeping a close watch on the NAFTA/impeachment/Iran chaos south of the border. In the meanwhile, things are already rolling out behind the scenes including consultations on MAID and the upcoming budget. Trudeau also held a teleconference with the premier of B.C. yesterday. Doug took off for five months and did nothing. Trudeau may not be in the HoC right now but things are still getting done.

I suspect that he still regrets that we did not join the USA in the Iraq invasion and has not noticed that closing the Canadian embassy in Tehran is not helping Canadians now.

Former prime minister Stephen Harper has suddenly resigned from the board of the Conservative Party of Canada’s fundraising arm, as the party descends into organizational chaos and bitter recrimination in the first week of its leadership campaign.

FIGHT! FIGHT! FIGHT! About time the Cons had their own Chretien/Martin debacle! Hey, maybe Charest can get Harper to quit the IDU? Wouldn't that be nice...

That leaves Chopper MacKay, Erin O'Fool, Skippy Poutine and some nobodies, including Arrogant Seale. And Crooked Charest staging a bloodbath with Scumbag Steve.