The Never-Ending Nonsense Of The Con Clown Rex Murphy 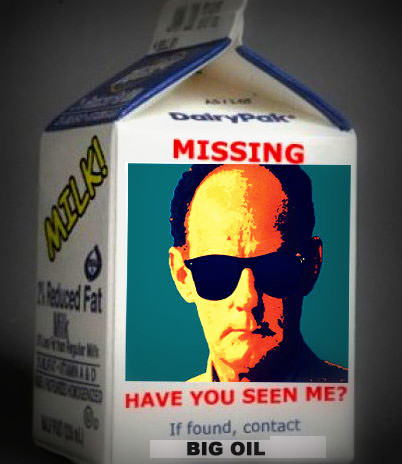 I haven't read or heard anything by Rex Murphy for so long, that I thought he was missing in action, or retired, or dead.

But no, the crusty old oil pimp is still going, still ranting and raving over at the National Post.

And he's just as ghastly as he ever was... 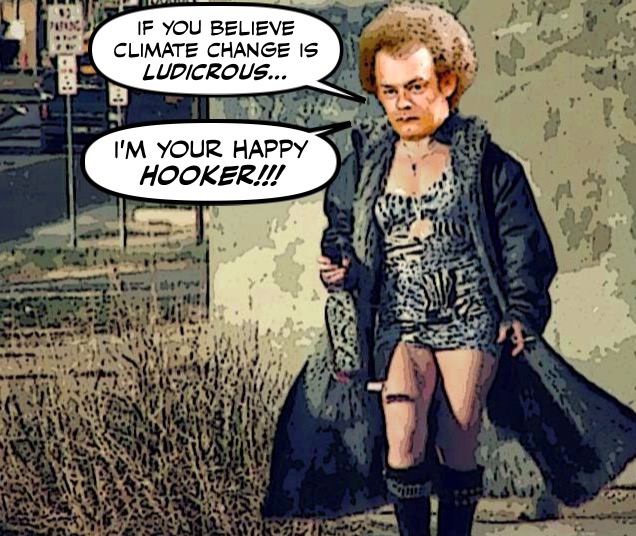 Still inhabiting his kooky corner of the right-wing universe.

And in his latest foul rant, taking aim at Time magazine's PERSON of the YEAR, the murdered Saudi journalist Jamal Khashoggi.

Time, that tattered, shrunken revenant of a once-popular news magazine, continues in its endless decline to delude itself that it has either the authority or the competence to name the “Person of the Year.” Brilliantly it named journalists — “The Guardians” — as 2018’s collective heroes, with Jamal Khashoggi given pride of place on the once-iconic cover.

Time neglected to check on Khashoggi and now finds that it nominated a Qatar stooge, whose columns were midwifed by officers in the Qatar government, and whose “journalistic” career was but a distracting pendant to his many more serious activities, latterly as an anti-Saudi lobbyist, nephew to the one-time world’s biggest arms dealer, and a host of other shadowy mésalliances.

As well as claiming that most other journalists can't be trusted, or be called "guardians of the truth," because they're biased against Donald Trump.

As far as journalists collectively being honoured with the ascription “guardians,” that surely cannot apply in North America or Europe if we take most of their coverage of Donald Trump as the testing ground. Trump journalism will some day earn its place in medical literature, side by side with malarial fever and LSD as engines of hallucination and fitful nightmares.

Who as you can gather from that feverish statement, Murphy simply adores... 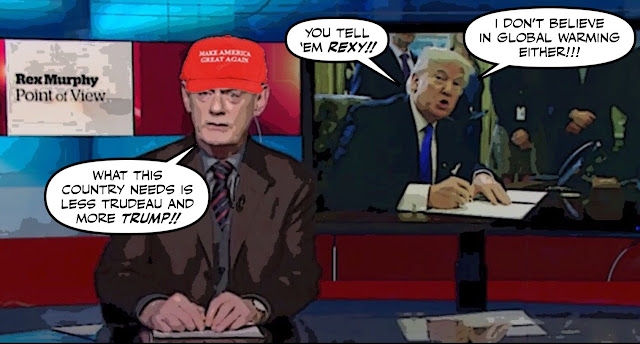 Almost as much as he hates Justin Trudeau, and journalists who are biased against climate change deniers.

Place the adjective environmental to govern the noun journalism and the former swallows up, nullifies, extinguishes quite the latter. What we may call real journalists on the global warming file are, to use a familiar category, on the very sharp end of the endangered species list. The majority of environmental journalists are a choir in perfect harmony on a one-note score, the settled-science symphony of the IPCC and Al Gore. 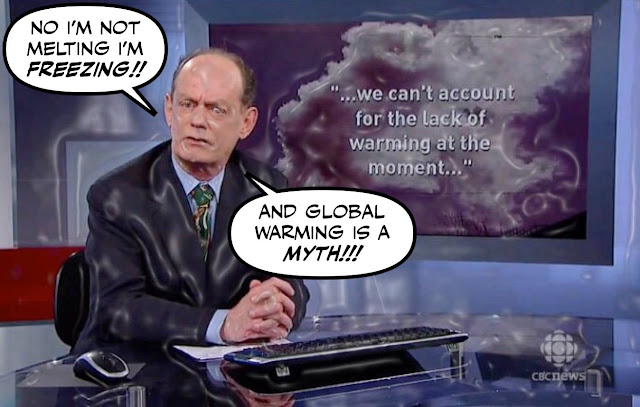 Who doesn't believe in climate change for obvious reasons... 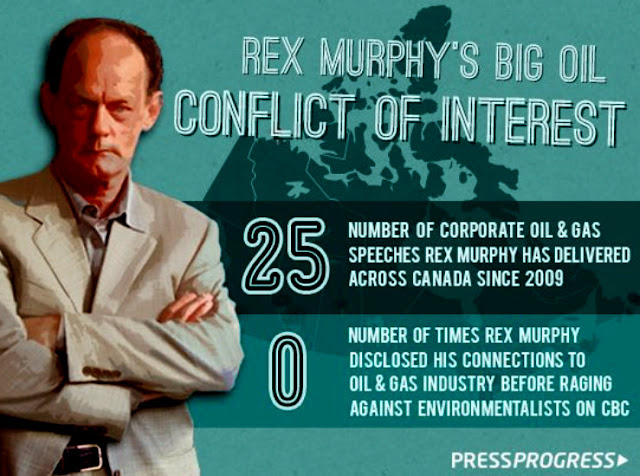 Which makes him just about the last person in Canada who should criticize environmentalists or journalists.

Considering that he was NEVER an example for others to follow... 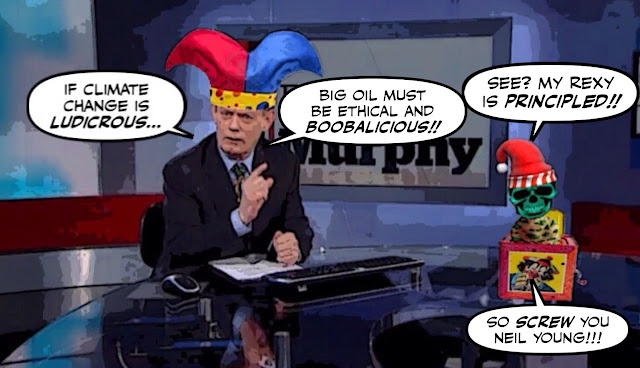 And the only question I still have before I try to forget Murphy again, is why did the CBC managers employ that shameless teabagger for so long?

Why did they allow him to debase the reputation of the once proud National?

And do those same apparent Con sympathies explain why the CBC is now letting Andrew Scheer get away with murder? 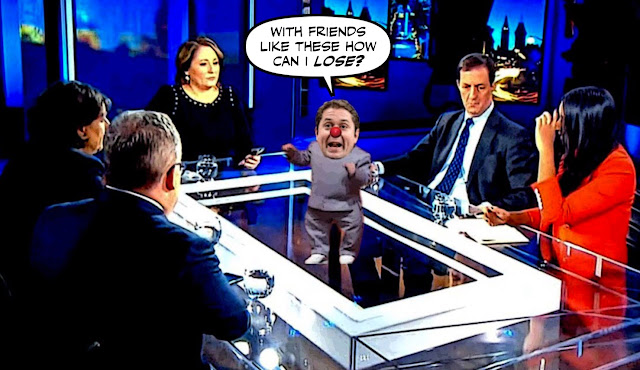 By failing to hold Scheer accountable for pandering to racists, or for lying like a thief.

And why they are trying so hard to make him Prime Minister, even though he's planning to kill them?

For that we must know.

The fate of the CBC and the country may depend on the answer.

And only the truth can save us...

I thought he had retired. If he had died, there would have been an obit.

As for Khashoggi, of course he was an insider. That is why his dissidence was so significant, and the Saudi régime had him on their hit list.

So the Cons aren't even hiding their outright medieval justifications for using violence to own the Libs anymore. "Because it's 1642." Scheer's two-minute-hate fatwa memes and fire-and-brimstone chats are bad enough. Now Tyrant-o-Snore-us Rex the fossil fuel dinosaur basically says Khashoggi was a damnable heretic who deserved his fate because... some far-reaching, convoluted logic about climate reporting and the pagan Gaia cult of Al Gore? (Which, of course, poses a threat to his portfolio of special dispensations from the sacred temple of the oiligarchs.) I'm sure if you look enough you'll find an op-ed he carved into a stone tablet praising the Catholic Church for "deplatforming" Galileo, that shill for solar-powered heliocentrism. Sunny ways, Rex! By the power of Uranus in retrograde. No one expects the Murphy's Law inquisition!

Wonder if T Rex's prehistoric cousins were spouting the same type of nonsense just before the asteroid struck. Massive change is coming like it or not. The human race can either collectively rise to the challenge or go killer ostrich!

Hi lagatta...as I've mentioned before, Murphy lives or lived in a fancy condo in my neighbourhood, so I couldn't avoid him, and once had a horrible experience where I came around a corner in my supermarket, he was bent over sniffing sausages, and I almost collided with him and sent him flying into the mystery meats section. I still have nightmares about that, because I really despise the man, not just for his climate change denial or his alt-right politics, but also because he's a hideous homophobe and a sexist pig who used to drool over female film stars with big breasts. So needless to say, his smearing of a murdered man doesn't surprise me in the least, and I can't help thinking that he's doing it to ingratiate himself with the Saudi oil pigs...

Hi Jackie...Murphy is so predictable and so weird. As I told lagatta, I suspect he's smearing Khashoggi because he wants to endear himself to the Saudis. He's a millionaire himself but is attracted to oil money, like a pig to truffles. So sooner or later whatever he's babbling about ends up on the altar of climate change denial. And of course at the crucifixion of Al Gore. He's a rotten little man, and I hope I can resist the temptation to write about him ever again...

Hi RT... Since Murphy is a very short man who is barely higher than my waist if his ancestors were dinosaurs they must have resembled iguanas. But yes, it's unforgivable that an educated man like him should be so ignorant about climate change, just because he likes to collect money from the oil industry. He really is shameless, and so are the CBC managers who gave him so much air time to spread his reactionary views...

I hope he is reincarnated as a woman with big breasts, so he could experience how inconvenient they are. Yes, I knew he was a homophobe. And remember him mocking a young anarchist at the time of the Seattle protests. Not disagreeing; denying the young man's right to speak on his stupid call-in show.

Rex and Stephen Le Drew, sold out so far they defy hellfire

However, who pays attention to Murphy anymore? While Rex waxed eloquent using big words and being ignored by the populace at large, the CBC also allowed Mark Critch of 22 minutes to satirize the man so well, he looked like the strange individual he is multiplied by ten. He was decimated by a fellow Newfoundlander who showed what a silly overbearing twit he was.

I don't see much point in even mentioning Murphy's latest tripe. Nobody paid it any attention but progressives who have given the man free publicity - better by far to ignore him instead of allowing his conceit to be revived by attack and attention.