Remembering The Murdered Women of the École Polytechnique 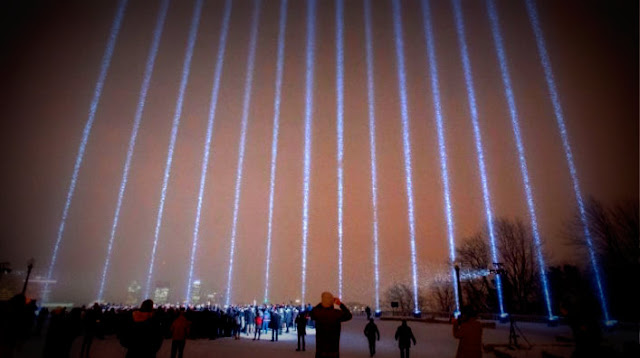 It was snowing in Montreal this evening, just as it was on the day they were murdered.

So the fourteen light beams shimmered as they rose from Mount Royal, one by one into the sky.

One for every woman murdered in the École Polytechnique Massacre 29-years-ago.

Murdered just for being women, by a man who hated them.

Some of their children are now older than their mothers were when they were murdered.

Their precious legacy was defiled by the Harper Cons.

The Scheer Cons care more about god and guns than they care about women and girls.

And to the gun lobby they are still The Enemy who made gun owners look bad.

But then what do those bastards know about gun violence? 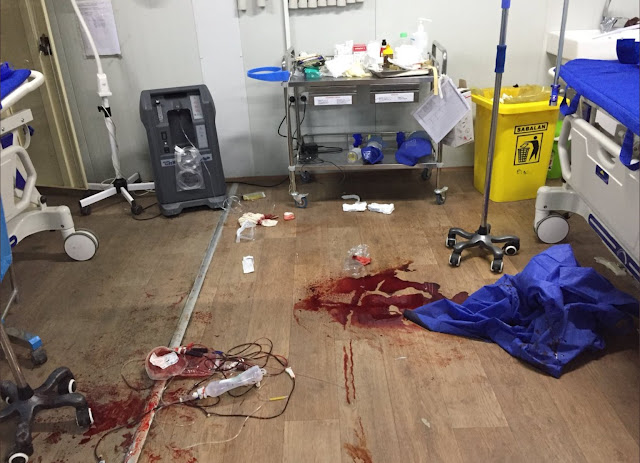 And why are so many victims of that violence still women?

Oh well, at least we now have a prime minister who is proud to call himself a feminist,

And was on Mount Royal tonight... 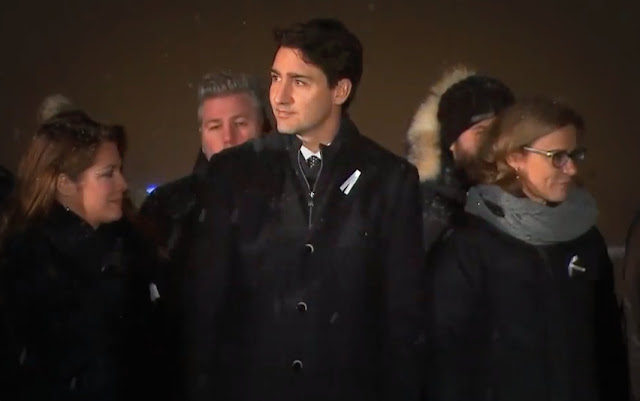 To help us remember them.. 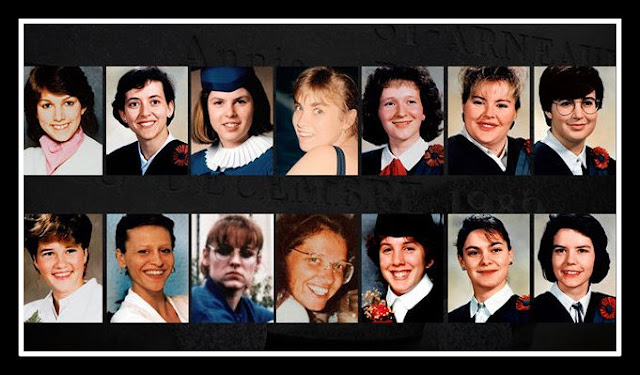 So we can twenty-nine years later still honour their memory, and their precious legacy. 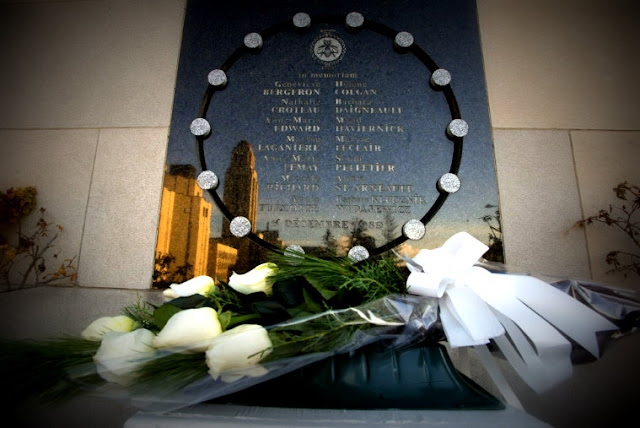 Do what we can to try to make sure something so horrible never happens again.

And do more to fight violence against women and girls...

As I recall (rather painfully), I had gotten into a very heated and emotional debate with several other posters on this comment board on the Polytech anniversary last year, over a number of issues connected to the case. Seeking to avoid a repeat this time around I'll simply say, may common sense, cooler heads, and warmer hearts prevail in this era of heightened anger and Trumpian rage, and may the women's deaths not have been in vain. May their loved ones, as well those of the victims of this year's Toronto "incel" rampage, find solace in the knowledge that there are countless women, and men — including Justin Trudeau — working to make this a more equal, enlightened, and peaceful world. 💝

Thank you for remembering those fourteen martyred women. Time may have moved on, but the memory of that tragic day will stay with me forever.

Well said, Simon. Even after 29 years this massacre of innocent women still has a profound effect on me, stirring the same emotions that overwhelmed me so long ago. Disbelief, anger, sorrow.
Time will never heal this wound and as you say, the best we can do is to take steps to ensure it will never happen again.
JD

Your post was the only one I saw that marked the day designated as one to fight violence against women. You would think that at a time when misogyny is surging more people would have marked the day. Sometimes I think we are going backwards not forwards.

Hi Jackie...In all my years of blogging, the story of the Montreal massacre and gun control, have resulted in the most violent and disgusting comments I have ever received. I think they were trying to discourage me from writing about those murdered women, but I never will. What I didn't do this time is write about my feelings about gun control, but only because I wanted to focus on the women. My feelings about gun control remain the same. As I have mentioned before years ago a crazed gunman killed sixteen very young children and a teacher in a school in the Scottish town of Dunblane. The British government was forced to pass strict gun controls that made Britain a much safer place. I'd like to see the same thing here, and I support any kind of gun control. And any gun nut who disagrees is invited to spend a weekend in an ER in Toronto, where as you probably know, we have an epidemic of gun violence that is claiming one young life after the other. I am prepared to give people who live in rural areas a break, but would also remind people that the suicide rate in those areas is also disturbingly high, so nobody is immune to the deadly effects of guns...

Hi anon...You don't have to thank me. As long as I am blogging I will write something on the Montreal massacre. Judging by the number of comments I realize that many readers don't share my continuing interest in the story. But I don't care, I would still write something even if not one person read it. It is a tragic story, and to me in a time of misogyny, it's one we should never forget...

Hi JD...thank you. To try to evoke in others the horror I still feel over the killing of young women just because they were women, I run that video clip. And for the first time I had to disable comments because so many were so ugly. I receive bigoted comments all the time, but none are ever as bad and disgusting as the ones that video received. Some men are really disgusting, and they make us all look bad...

Hi anon...I too noticed the lack of posts marking the day, and was also disappointed. But unfortunately even a site like Progressive Bloggers is just a shadow of what it once was. Almost all the younger bloggers have been driven off, and we are left with a collection of old men who couldn't give a damn about women's rights. But instead spend all their time attacking Justin Trudeau who they hate largely for his support of women's and gay rights. But don't be discouraged, those old reactionaries will soon be gone, and the new generation will boost support for human rights. While women of all ages will use the Montreal massacre to inspire them to continue the fight for equality...

I remember as if it were yesterday, because for women, it almost is.

"And any gun nut who disagrees is invited to spend a weekend in an ER in Toronto...."

Would you also invite a responsible driver and social drinker to the ER in an attempt to push your agenda upon them? Because if not, it highlights the hypocrisy in blaming responsible gun owners for gun violence.