The Dangerous Cowardice of the Nazi Supporter Donald Trump. 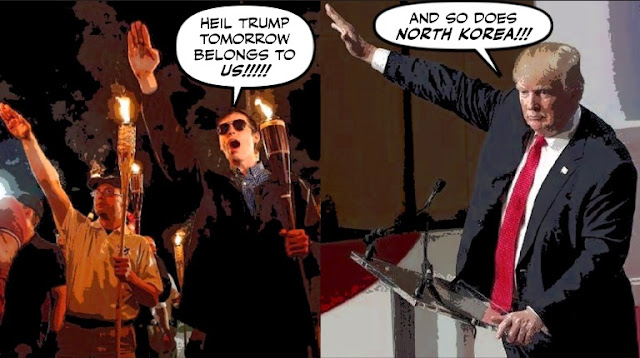 I can only imagine how Donald Trump must be feeling after his depraved and disastrous reaction to that deadly Nazi party in Charlottesville.

But I wouldn't be surprised if he's ready to go nuclear, for he must be that desperate.

And to make matters worse, his own darling Ivanka is making him look bad.

Making him look even more like a racist, or daddy's darling fascist. 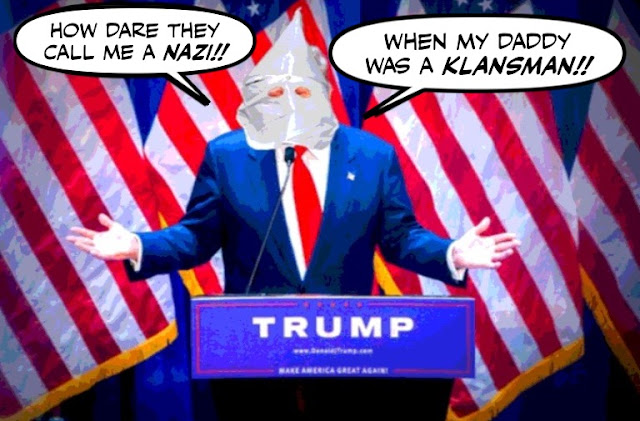 Or look even more like a moral coward, for not daring to speak of the hate that is poisoning America, lest he displease his bigot base.

Let’s discard the fiction that President Trump wasn’t placating white supremacists by responding so weakly to the neo-Nazi violence that killed Heather Heyer, a 32-year-old counterdemonstrator in Charlottesville, Va., on Saturday. The neo-Nazis heard his message loud and clear.

“He didn’t attack us,” crowed The Daily Stormer, a white supremacist website, about Mr. Trump’s statement after the two days of racist demonstrations. “Refused to answer a question about White Nationalists supporting him. No condemnation at all. When asked to condemn, he just walked out of the room. Really, really good. God bless him.”

Or fail to pleasure the grubby Steve Bannon... 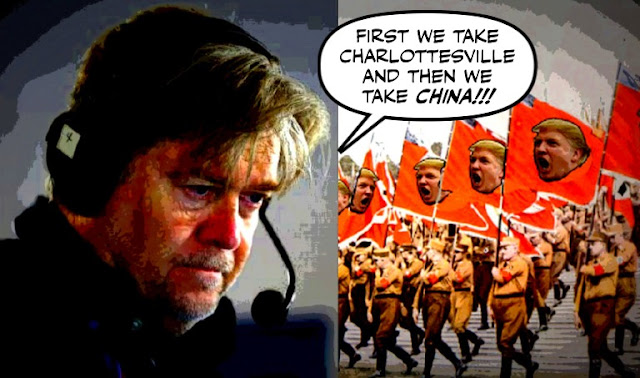 The deranged ideologue who whispers crazy things in his hairy ears, and encourages Trump to light the torches of white supremacy. 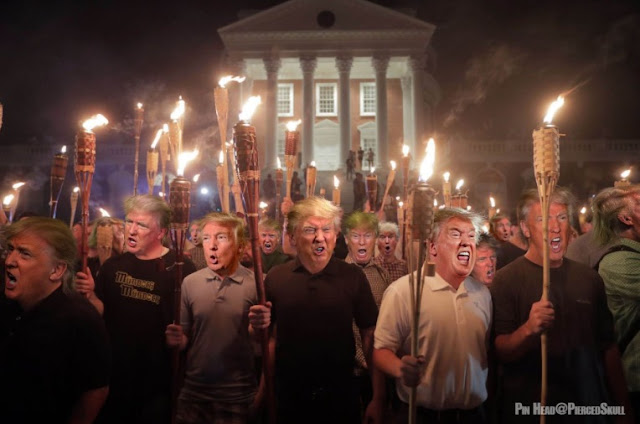 Yes, the white supremacists have always been with us. A parade of racist bigots is no surprise to anyone familiar with our history, especially those who have been the target of hatred and violence for centuries.

But when the mob of white men marched in Charlottesville carrying flaming torches Friday night shouting “Heil Trump” as the curtain-raiser for a day of violent clashes with counterprotesters that left three people dead, they showed the world that America is once again playing with fire.

And Trump was the one with the match. 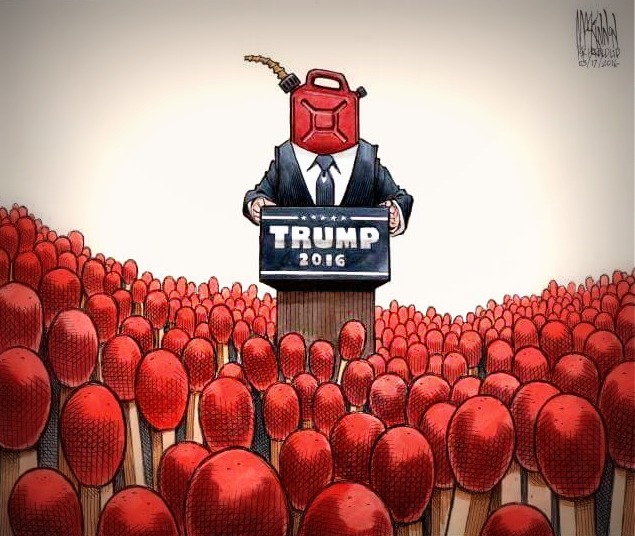 Even though Trump's ghastly bigotry is now threatening to set the United States on fire, as most of the drooling morons or silly suckers who voted for him, should have known he would.

So now we must wait to see whether that dangerous demagogue burns down his own country.

Or reaches for the so-called nuclear football, and blows up the world... 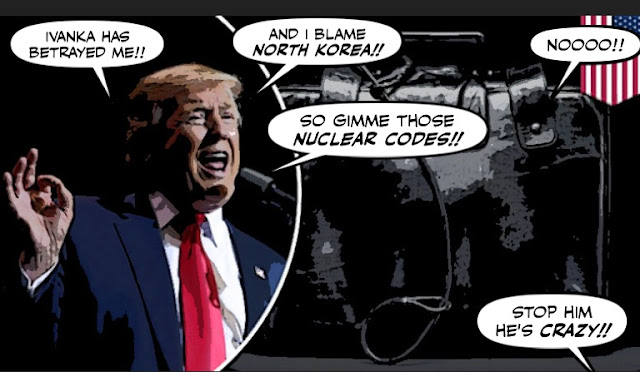 But at least Trump has been exposed again as a man without a moral compass, and now as a Neo-Nazi supporter.

Which will haunt him all the way to the next election.

And at least as E.J. Dionne points out, it's time to end the denial.

There are not, as Trump insisted Saturday, “many sides” to questions that were settled long ago: Racism, anti-Semitism, discrimination and white supremacy are unequivocally wrong.

A president who cannot bring himself to say this immediately and unequivocally squanders any claim to moral leadership.

Time to declare unequivocally, that Donald Trump was, is, and will always be unfit to be president.

And must be removed from office, by whatever means necessary, and as soon as possible.

Before that monster, that maniac, sets the whole world on fire... 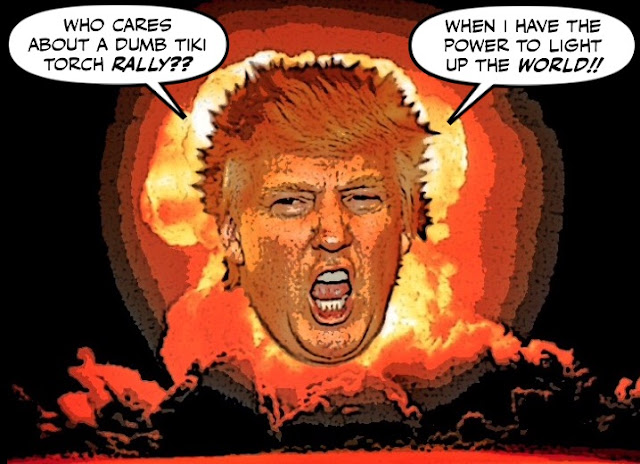 The filthy antifa were throwing balloons full of human waste. If I EVER see one of you commie punks on the street I will end you.

Dog Whistles Democracy. We got the same bunch of whisper people in Canada and their leader is fat Harper.

Another internet tough guy. I doubt you get out much.

Yep, one of your typical inadequate, frightened pseudo-nazis. Must be terrible to be so afraid of the real world.

How will you do it puke? Run em down with your car? Gutless piece of shit.

hi anonymous 9:08 am.... I see you've had too much coffee, or is it too much booze? And who is going to "end" those "commie punks?" You and whose army? In my experience Conchellas who scream like banshees usually end up moaning in a pool of their own excrement. But I am curious about one thing. Since when did "antifa" or anti-fascist become a bad word? When so many Canadians and others died fighting the fascists so that you and I could be free. Give your head a shake you grotesque Trumpkin, and start acting like a Canadian...

hi Steve...Dog whistles and democracy don't usually go together, but I'm confused. Is fat Harper THE fat Harper, or is it Jason Kenney or Ezra Levant?

hi David...yes, it does seem that those white supremacists are emboldened. But speaking as a white person, if those nerdy Nazis are our champions, we're really in trouble... ;)

Anonymous 9:09 a.m. Oh really now? You know the area I grew up in Ontario is home to the most decorated Canadian infantry regiment in WWII? Us simple small town boys and farmers have PLENTY of experience in kicking Nazi ass. You're more than welcome to step up to the plate any time, pal.