The Farcical Con Debate and the Coming of Kevin O'Leary 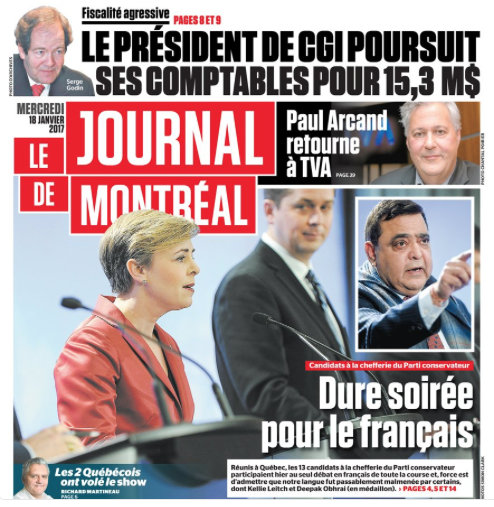 The headline in today's Journal de Montréal just about says it all. Yesterday's Con leadership debate was a "hard evening for the French language."

So badly did some Con candidates mangle their French, that even the translators couldn't understand them.

And no serious person could call it anything but a farce.

But at least the gloves finally came off. 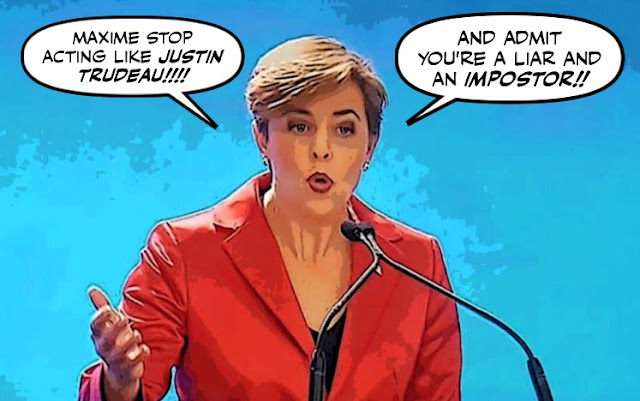 And we were treated to the ghastly spectacle of Kellie Leitch, looking weirder than ever, attacking Maxime Bernier.

Leitch accused Bernier of being a liar for supposedly giving big corporations more than $200 million when he was industry minister while, at the same, championing himself as someone who wants to end corporate welfare.

“Maxime has no lessons of transparency to give,” Leitch said. “Maxime is the liar and the impostor.”

But then of course she would say that, now that a leaked internal poll suggests it's a three-way race.

A leaked internal poll from the Maxime Bernier leadership campaign claims the battle for the party’s top job is a three-way race between former cabinet ministers Kellie Leitch, Lisa Raitt and Bernier himself.

And that while Keitch has a narrow lead in the rest of Canada, in Quebec she is trailing badly.

Bernier, the poll suggests, has secured nearly 50 per cent (49.83) per cent support within Quebec — nearly double that of fellow Quebec MP Steven Blaney, who has 29.17 per cent. Chong sits in third with 10.50 per cent support. Scheer and O’Toole, La Presse reported, barely register with Quebec voters, while Trost, Leitch and Raitt have less than five per cent support.

And is probably going to do even worse now that the man who wasn't there last night... But did have a lot to say about it, even though he doesn't speak a word of French.

Is finally entering the leadership race.

It's finally official: Kevin O'Leary will run to become leader of the Conservative Party of Canada. After months of flirting with the idea, he picked the morning after the French leadership debate and used a video on his Facebook page to declare his candidacy.

"What an opportunity we have in this country. Limitless bounty," he said. "Such opportunity to turn it around. I'm so excited. It's time. "The potential of this country is absolutely immense. It's just really mismanaged," he said.

Even though his record as a manager is dubious to say the least.

His judgement leaves a lot to be desired.

And after yapping his mouth off on TV for so long he's left a record of idiot comments in his wake that any serious candidate can use to destroy him.

Like this tape where he proclaims that economic inequality is "fantastic."

And the really good news? The Cons don't have any serious candidates, their leadership race is a joke.

Their demoralized supporters are so desperate for a winner they might just choose this vulgar buffoon... 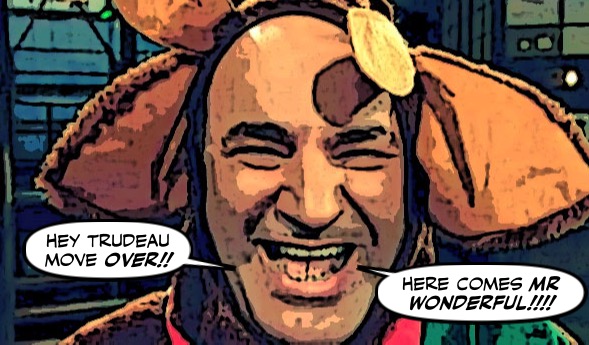 And anybody who thinks that O'Leary could beat Justin Trudeau should have their head examined.

The Cons are in a death spiral.

And have never looked so desperate. 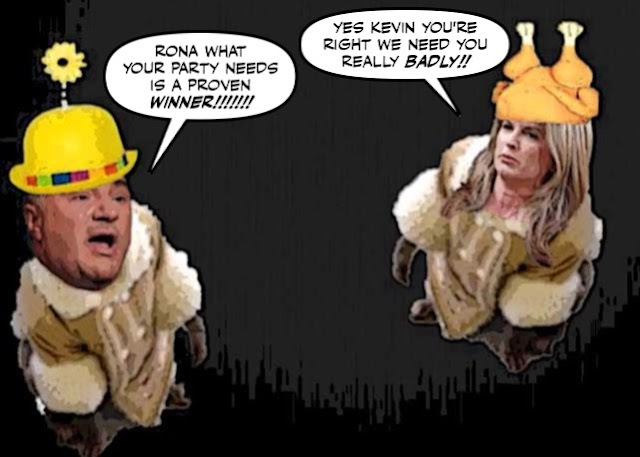 They laughed at Trump....

It would amuse me to no end if the NDP would recruit Arlene Dickinson. If she does'nt mind herding cats. Thats not an insult. I like cats.

Perhaps the biggest farce was that a "leader" MUST speak french in order to lead a country consisted of a variety of immigrants/ residents of whom some 15% or so speak french. Not helped by current leaders refusal to answer English questions in same language at a 'townhall'. Kevin speaks french poorly but 'trump' fluently, not a good sign!

Mr Wunnerful snarled out of my TV screen this morning, looking for all the world like a frenzied ghoul, face contorted in grimacing hate, informing me Canada has been mismanaged. Just like his own companies, I guess - O'Leary has always been less than he claimed. A bullsh*t artiste of the first order. Mr Show Me The Money is a US import, having not deigned to live here for years.

Hell, I can think of wonderful attack ads that the Liberals could use if the Conservative intellectual giants who made it past Grade 8 anoint him as leader. Going trump won't work here, because O'Leary is a contorted feature bald faced twot. But, hey, that's just my opinion.

“There’s 10,000 hours of things that I’ve said. I expect all of them to get regurgitated. They don’t mean anything. They’re not policy. Guys, this is the real deal. This is about Canada.

“I don’t care what I said 10 years ago. What matters is how are we going to fix this country?”

Once again, a card laid is never a card played with these hucksters. You recognize what one of these guys is when he appears on your doorstep and, if you’re extremely polite, you don’t slam the door in his face.

O’Leary has become well known because of his TV lecturing and business banter and he’s stated that his fame is a major advantage that he’s counting on in his competition with the other candidates. Now he’s claiming the right to disavow any damaging connotation that might be derived from that body of work and we are instructed to ignore the ignorance, self-contradictions and hypocrisy that typified it because, even though he seemed to mean what he was saying, it wasn’t “policy”.

Okay. I’d always figured that it wasn’t a “real deal” when the CBC used to introduce him as its “senior business correspondent” or something of the sort. Now his bullshit is to be considered “policy”, so we can take it to the bank.

But then there’s this:

“I don't say things without thinking about them. You may not agree with me, but ... as far as I'm concerned we need a lot more Kevin O'Learys in Canada.”

Really? You can believe that one too. How old was this kid ten years ago? Let’s review the tapes and ask him to specify to the following he’s attempting to gather which of his previous rants and pronouncements don’t mean anything. Then we can ask him to explain. I wouldn’t want to leave anything to assumption.

Dragon's Den cast member Arlene Dickinson told CBC's Ian Hanomansing yesterday that O'Leary is the same person off camera as on. She said Canadians need to seriously question themselves about whether O'Leary is the type of person they would like to see as the country's leader.

hi anon...well maybe they did and they're sorry now. But this is Canada not America, and O'Leary is no Trump...

hi anon...yes Arlene Dickinson has worked with O'Leary, she knows him better than most, she's not impressed. And of course the NDP can do with any good help it gets...

hi anon...I know I'm biased having a French-speaking companion, but I rather like having two official languages. When I go abroad, and then board a plane to come back, as soon as I hear them both I know I'm back in Canada. And it's not THAT hard to learn another language, I speak four. English, French, Spanish, and Scottish... ;)

hi MC...well that's true. It will definitely make the leadership race more entertaining. And thank goodness for that, because so far it's been so boring... :)

hi anon...I agree with your opinion, and I think that most Canadians do as well. Going Trump won't work here, this is Canada not America. The conditions are quite different, and loud and rude blowhards are frowned upon not celebrated...

hi anon...I know what you are saying. People can do incredibly stupid things, and I suppose that these days nothing can be ruled out. But I honestly believe that most Canadians won't let themselves be fooled by the Trumpanzees in our midst, and will never elect one Prime Minister. We're not perfect, but we are better than that...

Draft Amanda Lang - every quality one would want in a decent "conservative" leader.