Kellie Leitch and the Trump Whisperer

Kellie Leitch's third rate Trump impersonator act has always been a freak show. But now it's getting even more bizarre.

Now she's not just dancing with the devil, like she once danced with Chris Alexander at the Cultural Barbarism Ball.

But of course, it's not the devil Donald who is pulling her strings, or whispering in her ear... 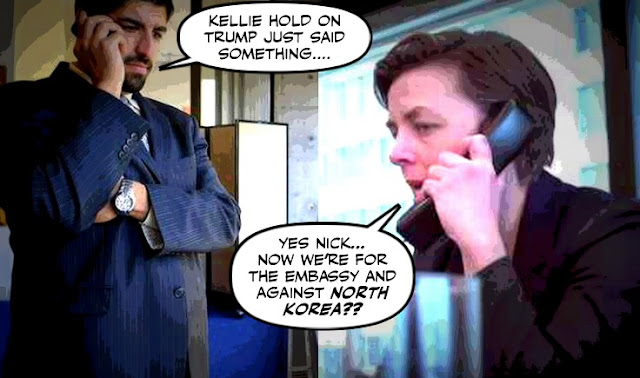 Who as Now's Enzo Di Matteo reminds us, fell for Trump hard.

During the U.S. election, Kouvalis was busy dispensing advice on Twitter like he was angling for a job with the Trump organization. He was itching to map out a campaign here fashioned on Trump’s, and in Leitch he thinks he’s found the perfect vessel.

And in his enthusiasm to try to recreate the same phenomenon here, has clearly overplayed his hand.

From “Canadian values” to allowing women to carry pepper spray and mace to protect themselves from assault, locking up “agitators and activists” who stand in the way of pipelines or disbanding the CBC, “scattershot” might be the kindest word for the platform he designed for Leitch.

Made his empty vessel look and sound ridiculous... 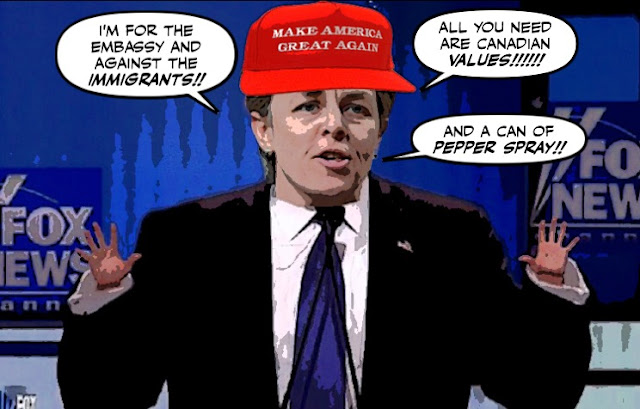 And is now threatening to wreck Leitch's campaign by scraping the bottom of the barrel.

Kouvalis is buying up ads for Leitch on Breitbart, the far-right (mostly) fake news outlet headed by Trump chief of staff Stephen Bannon. And actively pursuing the support of the Rebel Media crowd of former Reform MP and former Sun News Network loudmouth Ezra Levant to take his candidate to the promised land.

Kouvalis was blowing smoke up Levant’s ass on Twitter the other day, describing him not once, but twice, as a “true Canadian patriot.”

And further damaging his reputation and hers, if that's possible, with stunts like this one.

Conservative leadership candidate Kellie Leitch’s campaign manager, Nick Kouvalis, admitted Monday night to sharing false information on Twitter, saying he did so to get a rise out of “the left.”

Which tells you all you need to know about Kouvalis, who has been known to spread fake news before.

And of course, tells you all you need to know about Kellie Leitch's judgement... 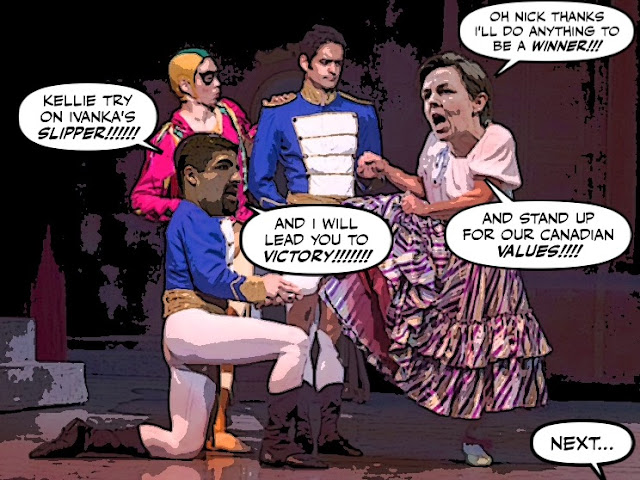 She sold her slipper or her soul to Big Nick.

And hopefully, with a little bit of luck, when the clock strikes midnight.

They'll both turn into Trumpkin pumpkins together...

I seem to remember Joe Clark wanting to move the embassy to Jerusalem. He had to do an about face that may have contributed to the loss of his minority in a vote of confidence.

Yeah, the slapdash Trump channeling is gonna come back to bite her and bite her hard if she ever presents it beyond Twitter. It's one thing to toss this red meat out to her bigoted base, but it's another to present it to the average Canadian still flabbergasted that muppet Mussolini managed to obtain the Presidency.

The fact that he's going in with record disapproval and unreadiness numbers would give her pause in aping him so nakedly, or so you'd think. Give his "administration" a couple of months and we'll see how well that brand of braggadocio survives a few scandals and national embarrassments.

I think it's also ironic that Kouvalis is coming out and straight up saying "Yeah, we exist to make liberals cry. That's all politics is to us." It's been the subtext of right-wing media for years, but now they feel emboldened enough, they're making it the text. Policy's all but gone by the wayside.

I'm not familiar with the tweet that Nick claims he posted to get a rise out of the left, but I doubt his sincerity. False information and exaggerations generated either by or on the advice of his type of political operative are usually designed for the purpose of working ignorant supporters into a state. At the same time, I realize that many of the insecure can become so eager for attention that they would equate having taken minor note of something they've said with "going nuts" over it.

Hi Simon, glad you're back.

Move the Canadian embassy to Jerusalem? I suppose she's going for the Jew/Evangelical vote. I was somewhat supporting Leitch up until this point, but I'm sick and tired of Canadian/American politicians shilling for Israel. It's an apartheid state with eugenics that would make Hitler blush. They fight proxy wars against their neighbors and commit genocide against the Palestinians. The Zionists who pull the strings will stop at nothing short of world domination.

If Leitch wins the Con nomination, this Con is voting Green. (If only the party could give Elizabeth May the boot...)

Describing Ezra as a “true Canadian patriot?” Gag! "Tipsy" Kouvalis is lining up all his bottom feeders in a row so Kellie the bigot can channel them to attract all the bottom feeding voters to join her heroic campaign of hatred and division. Sorry Kellie, there aren't nearly enough of them in Canada to give you a hope in hell(her future home)of winning.
Should she somehow win the leadership race, it will surely spell the end of the Cons as we know them.
JD

The more the likes of Leitch and O'Leary open their mouths and tweet their thoughts, the more Canadians will turn their backs on the CPC. Riding on the coat tails of Trump, really??

hi anon...yes the whole idea of moving the embassy before a peace agreement can be reached is absurd and criminally irresponsible. It can only help pour fuel on the flames of injustice, and Leitch should be ashamed of herself....

hi anon...I agree this Trump channelling will get the Cons nowhere. Not when so many Canadians are reading a Trump presidency, and the last thing they need to see is a bunch of homegrown impersonators. But as for Kouvalis I'm not surprised. For I read some of his comments during the Occupy days and they couldn't be reactionary. And as you point out, now like other Trumpanzees he thinks he can say or do anything...

hi John...what he retweeted was a list of fake contributions some Trumpling claimed the Liberal government was paying governments and terrorist groups all over the world. Even though he knew it was fake news. But then nobody should be surprised for when he managed Rob Ford's campaign he used one dirty trick after the other. That is who he is...

hi MC...thank you, I'm glad to be back, although I'm still recovering from what turned out to be a three day party. And yes I can understand your frustration at the way governments keep trying to placate the Netanyahu regime. Even though that regime is destroying any hopes for peace, and leading Israelis and Palestinians alike to absolute disaster and even more useless bloodshed...

hi anon...yes, it really makes you wonder whether Big Nick has fallen off the wagon again. For somebody managing a leadership campaign it makes absolutely no sense, and surely can only hurt rather than help Leitch...

hi JD...yes isn't calling Levant a "true Canadian patriot" the absolute limit? I also gagged. But then it's shocking how much money the Leitch campaign is pouring into the Rebel, and for that alone it deserves to be defeated. But as you point out, the good news is that if Leitch wins it will finish off the Cons for a long long time....

hi TS...Thank you, I'm happy to be back. And yes, that's the Cons big problem. To win the leadership their shabby candidates have to attract the support of racists and crazies. But in a general election all of that will work against them, and condemn them to defeat. It's a horrible dilemma, but at least it's their problem not our...

Besides all the ethical and politican issues surrounding the moving of the Canadian embassy; it ought not to be moved because it is going to cost a lot of money. The federal government would be better off using that money to build new housing on reservations and the homeless in all parts of Canada. Only when all Canadians are housed in decent accommodation ought to look at moving any embassy anywhere.

Moving the embassy to Jer. is simply a waste of money this country can not afford as long as there is poverty and a deficit. Some of these politicians don't get out enough and see the real world.