Justin Trudeau, Scotland, and the Values That Define Us

It was only a tweet, but it was like a flash of decency in a darkening world.

It has been favourited more than 500,000 times already.

And it did send a powerful message to the bigot demagogue Donald Trump. 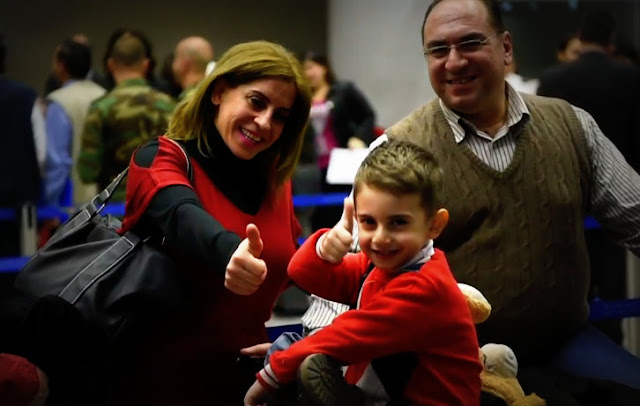 In Canada, refugees are still welcome.

Canadian Prime Minister Justin Trudeau is reassuring refugees they will still be welcome in Canada despite a U.S. ban on Muslim travellers and refugees. In a series of tweets Saturday, Trudeau said Canada will continue to welcome refugees and immigrants.

And if that made me proud to be a Canadian.

Imagine how I felt when I saw this tweet from Nicola Sturgeon, the First Minister of Scotland.

Because it only reaffirmed that the other country I love also shares my values... 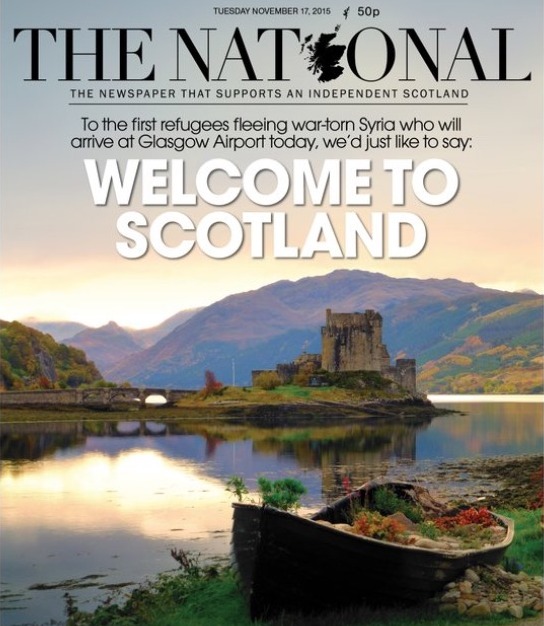 It was one of the first countries to welcome Syrian refugees with open arms.

And although the Brexit Cons in London are turning Britain into a jungle, where bigotry runs rampant, even its precious National Health Service is being destroyed.

And Theresa May, the new Thatcher, is kissing Donald Trump's large behind... 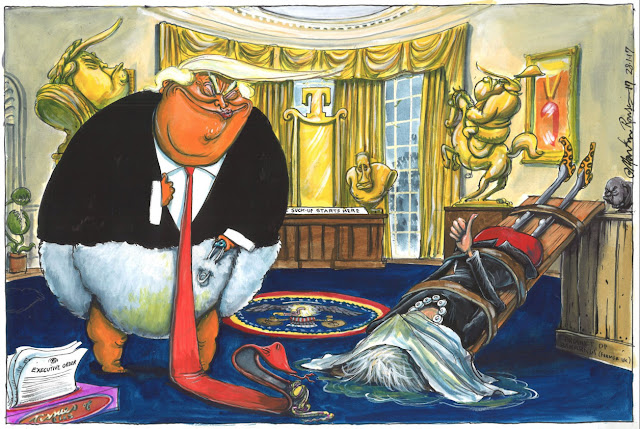 In the most shameless manner.

Scotland is trying to be a kinder, gentler society.

The kind of society I believe in.

So I'm glad to see both countries are being celebrated by Americans, even as their own country is enveloped by the darkness of Trump.

As Americans gather to protest the actions of the vain, ignorant, cruel, braggart occupying the White House, Canadian Prime Minister Justin Trudeau displays the kind of leadership that makes a nation round.

With our values and our policy compared to his.

This is the official policy of the United States. Abandoning those most in peril. Cowering against even the perception of danger. Locking people out on the basis of religious bigotry. This is Trump’s idea of “things are going nicely."

And in that regard I found the juxtaposition between this headline in the American magazine The Hill, and Kellie Leitch's ghastly ad ironic and instructive...

And when I checked out Leitch's Twitter feed to find out how she was reacting to Trump's refugee ban, I found her silent on that subject.

But still going after Canadian Muslims...

Now by attacking a private member's bill asking the government to do more to fight Islamophobia.

And by so doing, proving without a doubt that Leitch Trump is indeed a nasty bigot, and her so-called "Canadian Values" campaign is nothing but a farce.

As well as proving that the Cons, who disgraced themselves during the last election campaign, will never change... 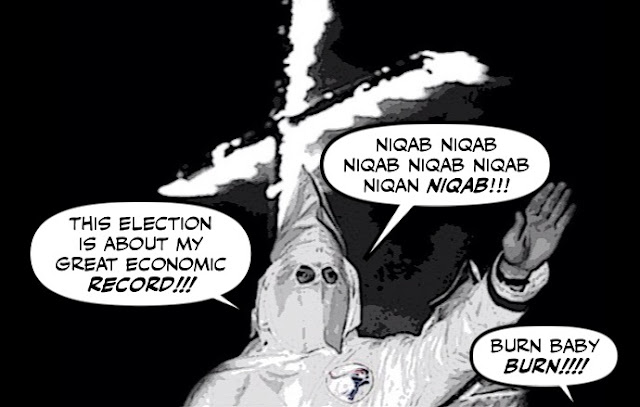 They are the Hate Party, they must never be allowed to govern this country again.

Justin Trudeau's values are our values. And whatever you may think of him, values define a country more than anything else.

So good for Justin.

And of course Scotland forever... 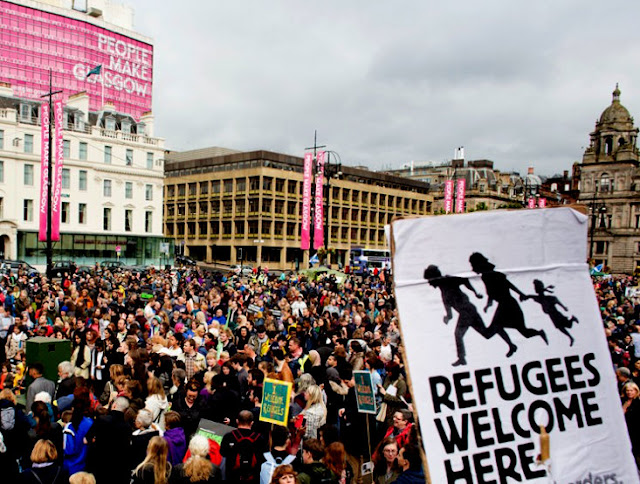 Hi Simon, while we were all (rightly) screaming and protesting about the Muslim ban, Bannon consolidated more power.
I am convinced that dump is an angry and senile old fucker who is being led along by fascists like Miller and Bannon.

"Special privileges?" No Kellie, it's to help protect them from the likes of you.
As you said Simon, she's silent on the ban as she was on the woman's march. Maybe she was overcome with "excitement" after watching her beloved Trump's "Executive Orders-Palooza" last week. As the Donald would say, what a nasty woman.
Judging by JT's tweet, I dont expect he'll be taking any bullshit from Trump in the days ahead and that works for me.
JD

.. Canada awaits Justin Trudeau expressing what is common knowlege & actual fact. Donald Trump & Steve Bannon are fascists by any definition & there is no 'alternative facts' to the contrary. Trudeau needs to communicate from that public stance, before 'negotiating' a damn thing with Trump et al

Kizhr Khan was on CTV this morning. He praised Canada and noted that the people who are called aliens, illegals, and immigrants in the USA are known as "New Canadians" in Canada. I agree that crisis brings out the best and worst in people. The mayors of many Canadian cities weighed in supporting refugees and even Brad Wall let the world know that Saskatchewan would take more refugees.

I too am proud, and pleased, when the ghost of Diefenbaker, responsible for our first human rights bill, haunts the conservatives here.

It was reported about six hours ago that six people were murdered in a terrorist attack on a mosque in Quebec City. It is absolutely sickening. Cliff at Rusty Idols has suggested Kellie Leitch has blood on her hands and I agree with him. So does admitted liar Nick Kouvalis and anyone associated with her. I'd like to say so does frequent poster here MC, this is the type of thing that foments hate, mister. Absolutely unacceptable. Not in my Canada you won't.

The world will take note that "polite" Canadians have no need of fascists visiting our beautiful country.

hi anon...from everything I read, I think you're right. Bannon and Miller do seem to be running the White House, while Trump tweets like crazy, and pretends to be President...

hi JD...yes, "special privileges" are words bigots are always using, to take rights away from historically marginalized groups. They have been used by homophobic religious fanatics against gay people, and now Leitch is using them against Muslims. She is as the Donald would say, and he should know, a really nasty person...

hi salamander...no Trudeau must play a much more diplomatic game, or Trump could take out his anger on the Canadian economy, and whack a third of our GDP. It's up to Americans to depose Trump not Trudeau, and the message Trudeau is sending out is understood by all who hear it. All we can do really is lead by example...

hi Mr Perfect...yes I heard the terrible news, and it saddened me deeply. And like Cliff I also hold Kellie Leitch partially responsible, along Nick Kouvalis and other bigots like Ezra Levant. And I will say so in my next post. Those ghastly Trumpanzees are trying to turn Canada into ugly Amerika, and enough is enough....

hi David...yes wouldn't that be fun. I will travel to wherever I must to greet him. And hopefully will have the double pleasure of both shouting at him and mooning him... ;)

hi p2p...yes I heard what Kizhr Khan had to say and I couldn't agree more with him. I've always hated the word aliens. Trump may have come from outer space, but New Americans or New Canadians is a much better word for immigrants. Which with the exception of our First Nations is what we all are. And yes, like you, I am very proud of the way Canadians have embraced our refugees, and I give thanks for our precious values that have spared us from the fate of the tormented United States...