The Con Media and the Fake Helicopter Scandal 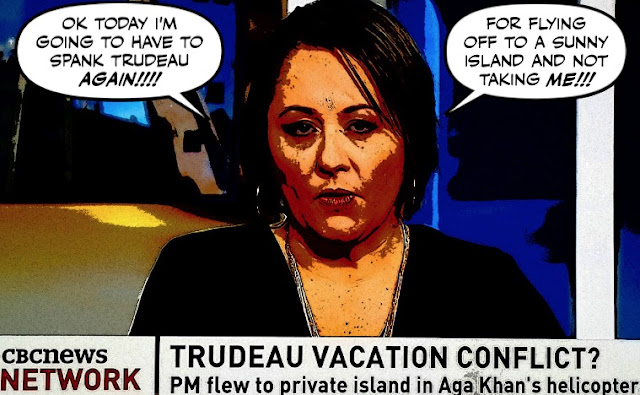 And leading her grim increasingly boring show with the story of Justin Trudeau, the helicopter, and the Aga Khan's island. For about the fifth day in a row.

Even though the story couldn't be more trivial, and the only Canadians outraged or excited by it are the ghastly Cons.

And of course the pathetic parliamentary press gallery, led by the boys from Postmedia. 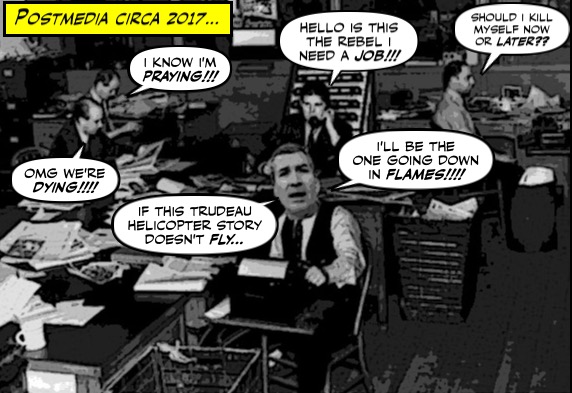 Like David Akin, the old Sun TV hack, who has been blowing up the story like a hot air balloon.

In the wake of accusations he broke federal law when he flew on a private helicopter during a recent holiday, Prime Minister Justin Trudeau declined Friday to offer a justification for that decision.

Which he no doubt wishes Trudeau would have used to get to the Aga Khan's private island, if he couldn't swim there instead. Or take Akin with him.

Only to end his week in this sad place...

After following Justin Trudeau's cross country tour through northeastern Ontario and being forced to admit he is still incredibly popular... 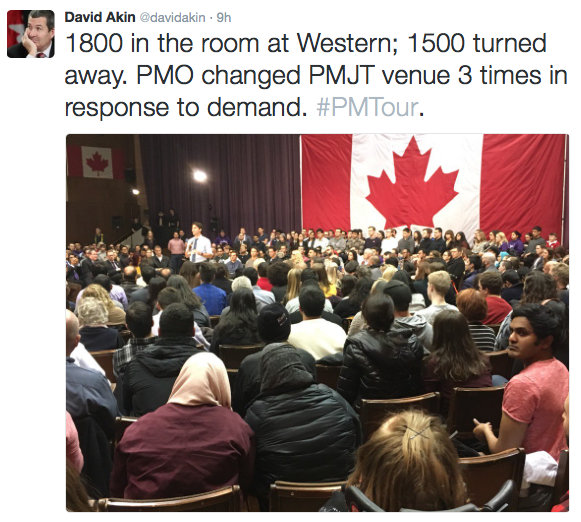 And see with his own eyes, as other media have reported, that nobody cares about his "big" helicopter story.

But that didn't stop the other Postmedia boys from sucking and blowing to try to keep the story alive.

With the old Harper fluffer John Ivison proclaiming that Trudeau should be working not meeting with ordinary Canadians.

Finalizing the budget; salvaging the government’s democratic reform agenda; formulating a response to Trump’s protectionist tax and trade plans. These would, by any objective measure, be a better use of the prime minister’s precious time.

Instead, he is traipsing around the country, calling local radio stations to request Tragically Hip songs and telling everyone he’s “just here to say hi to people.”

The real arrogance is in thinking that people are going to fall for this charade.

As if all these people were taking part in some charade... 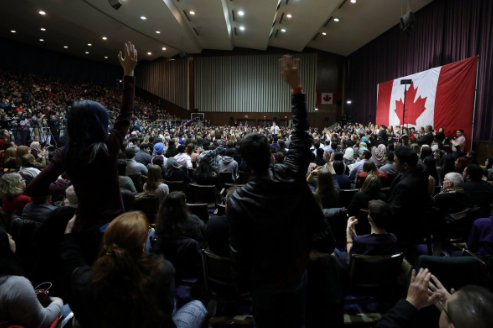 And were too dumb to know otherwise.

While Andrew Coyne, desperately tries to one-up Ivison, by mocking Trudeau and those ordinary Canadians, or commoners as he calls them.

Greetings, fellow commoners! I come among you, unchaperoned and unadorned, in a spontaneous and unrehearsed effort at mingling with the middle class, and those wanting to join it. Just keepin’ it real, kickin’ it, hangin’ out, as we middle class folk are wont to do of a weekday. Don’t mind the cameras, they’re just here to record my every move.

I’m not at Davos, am I? I could have gone — I could be on the slopes with Heidi Klum right now — but I didn’t. Instead, I’m here, with you, downin’ double-doubles in some godforsaken Ottawa Valley Tim Hortons at seven o’clock in the morning and honestly, Gerry, I couldn’t be happier about it.

Which couldn't be more disgusting or hypocritical coming from Coyne, who was born with a silver spoon in his mouth, and likes to hang out with the Bilderberg gang... 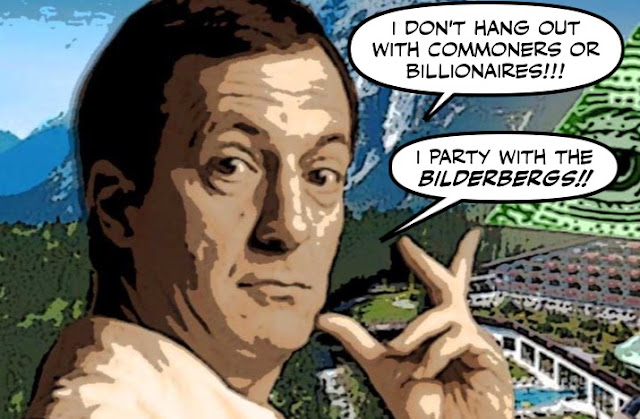 But of course, what really bothers the Postmedia boys, and other members of the parliamentary press galley like Rosemary Barton, is to see how disconnected they are from the feelings of real Canadians.

And what makes it even more pathetic is that Ivison and Coyne really are competing against each other, to see who can impress their boss the old Con Paul Godfrey the most... 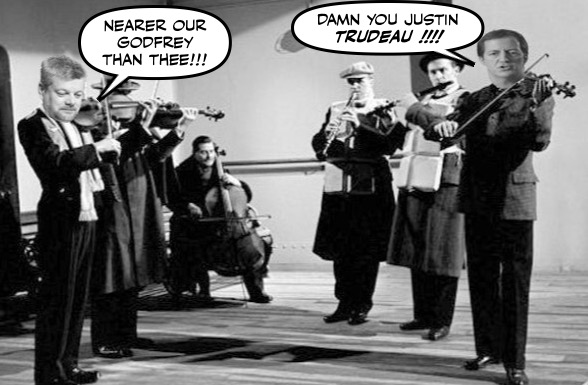 In a desperate attempt to save their jobs as the Postmedia ship threatens to go down like the Titanic.

Postmedia’s digital revenue increased slightly in the first quarter of its financial year — but the company did not meet its goal of cutting salary expenses by 20 per cent, according to an e-mail signed by the company’s CEO and president Paul Godfrey and circulated to employees Thursday.

And what is Godfrey doing apart from giving himself and his top managers big bonuses? 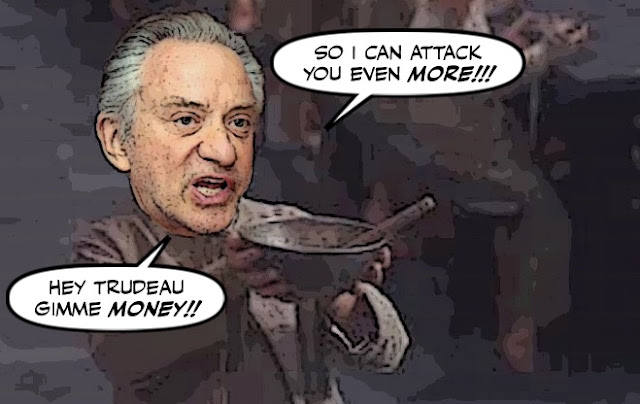 Begging for help from the Liberal government.

Which again couldn't be more outrageous or more hypocritical.

And what makes the whole thing even more disgusting, as Andrew Cohen points out, is that Trudeau has nothing to hide. And he and all Canadians should be celebrating his friendship with the Aga Khan.

So let’s revisit this: The Prime Minister goes on holiday over New Year’s. His office does not say where. We learn later that he and his family and some unidentified friends were in the Bahamas, guests of the Aga Khan, on his private island.

Inevitably, this raises suspicion in Canada, where tall poppies flourish. The harpies alight, accusing Mr. Trudeau of benefiting personally from the largesse of a man who is the founder of a global foundation that receives money from the federal government for its highly praised humanitarian work. 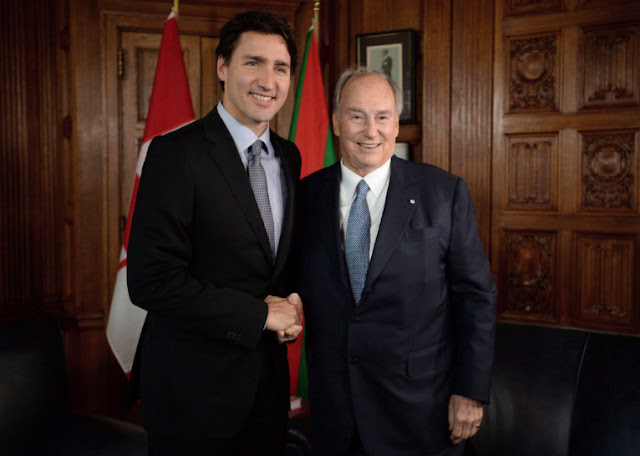 And those who are trying make it into a big ugly scandal are truly little people.

Mr. Trudeau’s problem was not that he accepted the invitation but that he forgot that Canadians don’t like their leaders rising above their station. At 150 years old, we remain strangely insecure. We are accountants of envy, and the saga of the Aga Khan and Justin Trudeau is the latest entry in our bulging national ledger.

The shabby hacks from the parliamentary press gallery should be ashamed of themselves, and stop sniffing their own farts.

Canadians should let the CBC and its Con masters know how they feel about Rosemary Barton.

And Postmedia should be buried once and for all... Nice of Andrew Coyne to point out how common I am. I needed to be reminded of that, didn't I.

The CBC hosts are acting wierdly. Twice in the past 16 hours reporters out and about with Trudeau have said that people are not interested in Khanland but want to discuss other issues more important to them. Both Power and Politics and The House hosts then proceeded to go with their chosen story , Justin and the whirlybird.

The CBC has apparently decided ' to hell with what Canadians want to hear about ; you'll get what we serve up and like it '.

By the way, the timing of the $55m wasn't right so I asked an Kady if this was a Conservative programme . Yes, the funding has gone on for the past few years before Trudeau came to power. No mention of that in any media I have seen or heard.

We know that Harper was just a Canadian version of Trump. As we feel empathy for our neighbours to the south, we are so relieved to have a competent government that reflects the majority.

These fluff balls at Post Media are just a minor annoyance in our every day lives.

I have taken to turning of the radio whenever the "helicopter story" appears. This is so dumb you'd think she was an American reporter. Heck, she may even sound like a Fox News reporter.

Oh, actually all those people were raging mad at Trudeau---if you look closely you will see pitchforks and torches clutched in their angry hands. :)

Only positive 'reporting' of the Little Prince will be allowed from now, is that right?

Can't hurt his little feelings now can we?

Visiting Aga Khan's private island saved the taxpayer on security. And liberal Muslims are our friends. Trudeau should keep his holiday expenditures and expenses comparable with other PMs.

We need to take over and take back the CBC.

Well it must be a friggin big deal to the overlords to continue to fund postmedia at a loss. While I hate the tit for tat of modern politics I cannot resist musing about F35 pilot petes helicopter ride. They all have tar on themselves so sit the fuck down shut the fuck up about the other guys and start running the country for the betterment of we the citizens and taxpayers. Please.

hi anon...yes that's exactly what I thought. Nice of that aristocrat to put us commoners down to try to save his job. Or his head. Where's a guillotine when we need one? Long live the French Revolution !!!! ;)

hi anon...yes I'm sick of them too. Especially since now that they're all looking and sounding like Cons, or swimming like a school of fish...

hi rumleyfips...I don't know what's wrong with the CBC. Once upon a time their Ottawa Bureau seemed to act more independently than the others, but now they too are sounding like a Con propaganda service. I can only assume it's the Con board and a case of trickle down ideology. So the sooner the Liberals fire that board the better...

Hi TS...speak for yourself, those Con clowns at Postmedia are a major annoyance in my life. ;) But you're right, we're lucky to be able to be living in a Trump-free Canada, and the Con losers at Postmedia are only digging their own graves....

hi jrkrideau...my reaction is just like yours, as soon as I hear the subject come up I switch the channel. They criticize Trudeau for meeting with billionaires, and then criticize him for meeting with ordinary Canadians. As Martin Cohen said, it makes our country look so petty...

hi anon...It's not a question of protecting anyone's feelings, it's a question of fairness and decency. But you being a grubby Con wouldn't understand that would you? And get ready to be disappointed, for that "little prince" is going to rule over you for at least the next eight years...

hi anon...the whole helicopter "scandal" is totally contrived, and an invention of the parliamentary press gallery. The Aga Khan is a family friend, and where Trudeau spends his holiday time should be nobody's business...

hi anon...I couldn't agree more with you. We own that institution and it should better reflect the views of most Canadians. As I said above, a fish rots from the head down, and the first thing that should be done is fire the CBC's Con board....

hi Jack...I've always suspected that Big Oil helps keep Postmedia afloat, just like the Harper Regime used to do by running it's Con propaganda ads. As you point out, the Cons can hardly criticize the prime minister for taking a free helicopter ride, when Dumbo MacKay used to use military helicopters to go fishing. It is indeed cheap politics and they should grow up...

I wouldn't bet my money on that......for several reasons.

Here's what I'd like to see. Cons kicked off the board at the CBC. Money injected. Raise the standards and voila - I'll be able to watch regularly again.

How much did Harper spend of taxpayer's money on free flights and accommodations for many non-government guests on his trip to Israel?

How soon the Cons forget: