Michael Harris on Why Kellie Leitch Should Fire Nick Kouvalis 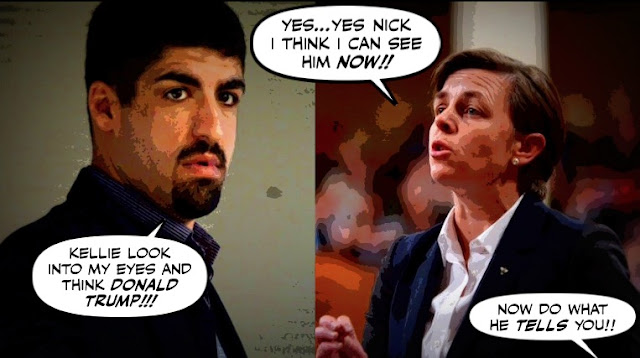 As you know, I believe that Kellie Leitch's campaign manager Nick Kouvalis has made a big mistake by leading the hapless Leitch down the road to Trumpland.

And has let his own passion for Donald Trump cloud his judgement, to the point where he is now even spreading fake news.

So I'm glad to see that Michael Harris also thinks that Leitch should also exercise some judgement, if she has any. 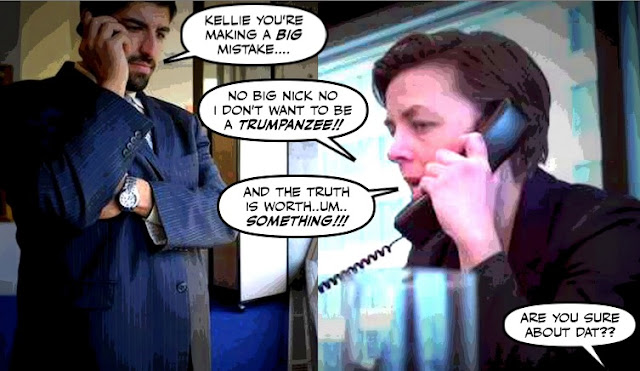 And fire Kouvalis, if only for the sake of what's left of her reputation.

Donna Trump, aka Kellie Leitch, has galloped into a political box canyon, raising dust in her wake. The only way out is back the way she came. And that means running headlong into a very inconvenient truth for the wannabe leader of the Tories.

The issue this time is her campaign manager. Nick Kouvalis has admitted that he posted a pack of lies about Justin Trudeau for the express purpose of getting a rise out of the Left.

For she does have a choice to make.

The question now is what candidate Leitch will do about it. We know Leitch thinks hard work, generosity, freedom and tolerance are shared national traits. But is telling the truth a Canadian Value she is up to defending? Does she really want to be represented by a toxic partisan who makes it up while he goes along?

The only person out of touch here is Leitch. She does not seem to realize that Canadians are already deeply wary of her Alt-Right leanings. Having shown the country how far she was prepared to go in abandoning real Canadian values to win an election, the smell of toast will be in the air if she now sits back and accepts blatant lies from her campaign manager as a legitimate modus operandi.

Her silence can only be interpreted as consent.

And if she still has any doubts that Kouvalis and her own raging ambition have led her to a very bad place.

Keitch should question why Big Nick is buying so many ads in Ezra Levant's hate mongering Rebel rag...

Or why he's calling the self styled Rebel Commander a "true Canadian patriot." 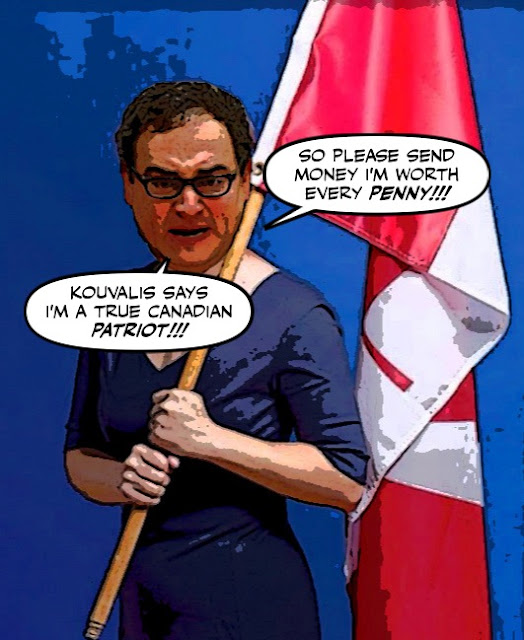 So she can get an idea of how she will be remembered.

Or just take a good close look at the kind of people she's attracting.

Look who's responding to Kellie Leitch's dog whistle. Conservative leadership candidate Kellie Leitch has earned the support of a group calling itself the "Cultural Action Party" – a far-right "anti-immigration" group that claims to "advocate" for "Canada's European heritage."

And ask herself who could her dirty dogwhistle attract next? 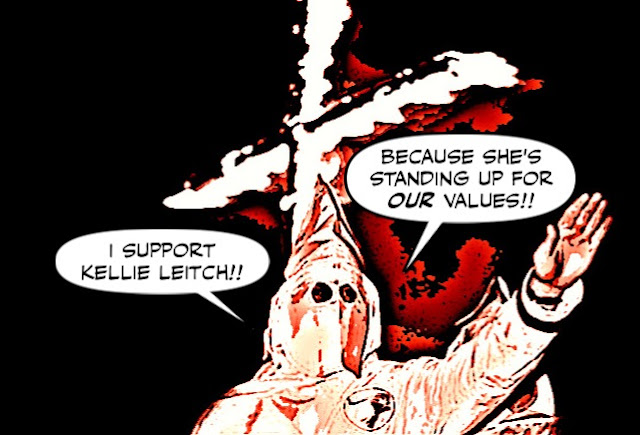 And is that what she calls defending Canadian values?

You know, I read somewhere that Kouvalis is known in the business as a man who can stir up stupid people.

And in Kellie Leitch he sure found his empty vessel.

If Leitch has any self respect, she should fire him, and end her foul campaign.

Or live in its shadow, or its stench, for the rest of her life... 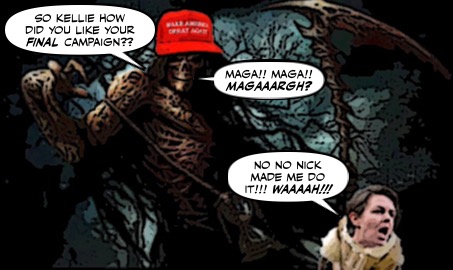 She's obviously lacking in mental awareness and well being. She's an intelligent woman, who has many accomplishments in her life. I would hazard the opinion that she is fully aware of what is happening around her, and that she condones it. If, on the other hand, she is being manipulated by her ape, she can call 911 ;-)

Even if Leitch were to fire Kouvalis, she would still continue down this path. The article by Harris, in my opinion, tends to blame Kouvalis, as if he had some influence over Leitch. first I'd suggest she is the one in charge and saying otherwise just isn't on. it diminishes her as a female politicians

politicians do not take orders from their campaign managers. Leitch would not be taking this position unless she agreed with it on some level. Even the most craven politicians has a line and if they don't well then they might be sociapaths and we don't want them leading anything.

No one is responsible for what Leitch says except Leitch. A politician who will take on a "winning" strategy which is socially unacceptable, still has made a decision, win at all costs. Winning at all cost, just isn't all that Canadian.

If Leitch wins the leadership of the Conservatives, I do expect some will leave the party and start either another one, or sit as independants.

Frankly, she should just resign entirely. She's already demonstrated herself to betray every value Canadians hold dear... at least the other Harper Cons are smart enough to pay them lip service.

Barring any unlikely resignation, I'd say Kellie has made her bed and she's quite okay to sleep in it. Firing "Tipsy" Kouvalis wont change her for she's chosen this path a long time ago. The intoxicating smell of fear, division and loathing has consumed her much like it did her idol Trump. Just as she felt the night Trump won, she wants to feel that rush of excitement of thousands of brain dead people screaming their support for her at her campaign stops as she feeds them one bullshit story after another.
Sadly, for her, it will all end badly and we'll be once again left with her in tatters. Much like your last image Simon, "waaah!!!! It's not my fault!"
JD

I wonder if she really is a closet member of the elite ?

Nick has a talent for sloganizing issues that resonate with the target audience.In this case it is a homogeneous older generation of Cons who long to return to the good old days. Give them a values test just resonates at so many levels without really saying anything other than creating a Huugeee amount of free publicity. If he can get a brutish mannered addict elected in Toronto the good,shepherding Kelly across the leadership finish line ahead of the lackluster pack should be easy. Then its off to the 2019 elections which will hinge on whether or not America is basking in the warm glow of Trump mania following the 2017 "shock and awe" stage or something a little more stark. Hopefully the warm glow won't have a radioactive origin and the stark will only be equivalent to walking out into the bright morning sunlight after an all night party.
RT

I hate this talk of PC and elitism so much. And i try to ignore trump. Its all so annoying. We can only look after our own backyards. I need a drink.

hi TS...While I mostly blame Kouvalis for Leitch's absurd Trump impersonation, she must also share the blame. And for that I blame not her lack of intelligence but her lack of empathy. I recently read her doctor ratings and one thing many of her patients complained about was her poor bedside manner. She doesn't care enough about people to understand what harm she might cause some Canadians. And for that alone is unfit to be the leader of any party in this country...

hi jrkrideau... every time I hear Leitch attack the elites I wince at her hypocrisy. And after reading this in a recent profile in Maclean's I'm even more disgusted.

“You’re lying,” Leitch yelled, according to Wong. “This is unacceptable. Even the prime minister [Stephen Harper] introduced me as Dr. Kellie Leitch this morning. I’ve earned all these titles. Do you have these titles after your name? No.” Wong said Leitch then threatened to call Harper if the cards weren’t fixed.

hi e.a.f....Leitch will probably continue down this path, and it is probably too late to change her tune now. But as you point out, there is a bright side. Should she manage to win the Con leadership, she will sink that party for a long long time...

hi Mound...well that's a good question. You would think one was enough, but now she's also got another one, and it's YUUUUUGE... ;)

hi anon...well that would be my preferred choice. I realize I probably should be rooting for her to destroy the Cons. But her campaign is so foul it could damage the social fabric of this country. So the sooner she goes the better...

hi JD...yes she probably will continue to lie in the bed she has made, and she has received more money than all the others so she can't let down her many donors. But yes, I'm hoping that last image proves prophetic, and that she eventually blames Kouvalis rather than herself for her crushing defeat. For that will be the final nail in the coffin of her bad judgement...

hi anon...it isn't about political correctness, it's about a person trying to stir up the fires of bigotry for crass political purposes. We really don't need to imitate Americans in this country. But please feel free to have another drink, just make sure it's Canadian eh?

hi RT....in the same Maclean's story I quoted above, and you can read here if you wish:

It explains why Kouvalis chose the strategy he did:


Through their polling, Kouvalis and Ciano found that the roughly 100,000 Conservative party members who will vote at the leadership convention next May tend to be white, overwhelmingly male with an average age of 66. Important issues to them include border security, personal safety and immigration. In short, it’s an ideal audience for a policy of screening immigrants, and has allowed Leitch to position herself against not only the media and the Liberal government, but most of the other leadership candidates as well.

But the problem is that while it might work to win a Con leadership race, it will never lead to victory in a general election.

So Kouvalis is no political genius...

Interesting story about her business card. She is a surgeon. In the world of MDs, surgeons are considered a lowly lot. I guess she is an extreme case.
TS