Rick Mercer On The Madness of Trump 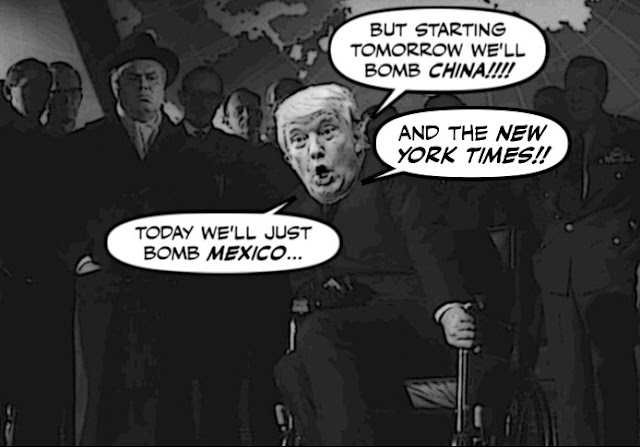 As I'm sure you know by now, I believe Donald Trump is dangerously deranged.

And any man who can single handedly move the Doomsday Clock closer to midnight is a man who deserves to be urgently removed from office.

Before he kills us all.

So I'm glad to see that Rick Mercer agrees that we're dealing with a maniac.

Why this wasn't obvious before Americans gave him the power to end life on earth is something I'll never understand.

When it seemed so obvious to me that Trump was unfit to be president.

I'm not the only one to question whether Trump is mentally ill. So does Paul Krugman.

But of course the only question that matters now is will we survive him?

And who will stop that dangerous maniac before it's too late? 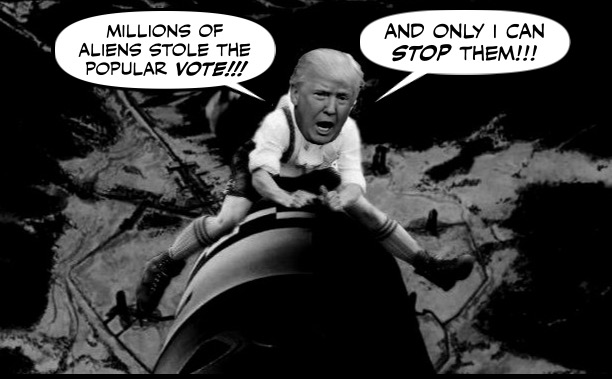 And on the seventh day.......oh wait - it's only the sixth.
This man is not a god as he thinks, he is a psychopath, a sociopath AND a very emotionally needy narcissist.
Certifiable and probably will be gone sooner than expected (by most guesses I've read the was to be within a year or so).

He paid women to pee on the bed that the Obama's slept on in Moscow, he can't stand the fact that Secretary Clinton won the popular vote, he is beside himself that President Obama had far larger crowds at his inauguration, ...Yes, he is a nut case with the nuclear codes.

Which will come first? How much threat and likely massive catastrophes, can be tolerated before some mechanism is found to remove Trump, while placating the rabid, self-delusional, paranoid, selfish, believers that elected him that a Trump-removal isn't a left-wing coup?

And replace him with who? By all accounts, Pence is a genial version of Trump, with his own agenda of beliefs ... appearing to me as another equally intense nightmare.

On one hand the US stock market volatility / fear gauge (vix) is at a very complacent low while the doomsday clock is as close to midnight as its ever been. Welcome to the Orwellian world or Twilight Zone where conflicting truths can exist side by side without being questioned. Its an excellent time for investing but doubtful we will be around to collect the dividends!
Still stranger is the sudden pivot in US foreign policy. For centuries foreign policy has been to prioritize external threats and subdue them starting with the Spanish, then the costal waters, islands,naval superiority,shipping routes, oil supply etc. Threats were neutralized through "friendly cooperation",occupation, regime change or economically weakened and isolated. According to the historical playbook cutting loose a large reasonably friendly neighbor by building a YUUGEE wall is insane. In the future if they misbehave and turn rogue / communist-soviet friendly the only thing left is to lob missles over the wall. The man thinks like a feudal king and we all know how well that worked out even if he doesn't. Simply amazed he has lasted this long unless some sort of golden bourgeois coup has occurred and no one sent out the memo.
RT

No definitive evidence/ proof of Trump paying women to do that.

At least Pence would not launch a nuclear strike if the leader of China said Trump has weird hair!

hi J Lawrence...yes, I can't see how a man like Trump is going to make it through his entire term, let alone the next few months. I think he's heading for a total meltdown, and I only hope it doesn't happen in the middle of some international crisis. Because if it does we're really in trouble....

hi TS...yes, the thought that Trump now has access to those codes is a real nightmare. I don't like to call people mentally ill when they not. I take mental illness and the suffering of those afflicted too seriously. But Trump strikes me as a man seriously unbalanced, and too dangerous to be the most powerful man in the world. We need an intervention....

h K....you raise a disturbing point. It would take a major crisis, and a desperate situation for his fanatical followers to believe it wasn't a left-wing coup. Which could lead to a civil war. But as for Pence, although he is a ghastly religious fanatic, I would still take him rather than Trump. Pence is at least relatively predictable, while Trump is capable of anything. WE are in a living nightmare, but if we survive we will win...

hi RT....yes, isn't it good to know that as the Doomsday Clock creeps towards midnight, the stock market is booming. There's nothing like big tax cuts to keep the capitalist casino going. I saw an interview with Naomi Klein the other day where she calls what is happening a corporate coup d'etat. And I don't think she's far off. Throw the mad Trump into that swamp and goodness knows what's going to happen...

Donald is a very accomplished con artist. He sells what people want to buy.
He is crushing scacred cows left and right and this is a good thing. The only nonsense he still peddles is climate change. I am sure he knows its real and do not be surprised if he does an end run on this issue. Barron is ten.