Donald Trump and the American Taliban 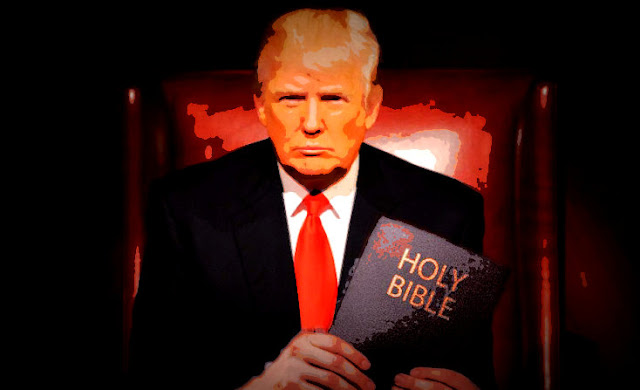 It will be left to future historians to try to explain how a grotesque sexual predator with no discernible morals like Donald Trump, could be embraced by the religious right.

But they are his most loyal supporters.

He has already thrown them a bloody bone by ordering that the U.S. not support safe abortions for women in poor countries.

But today he will present them with the biggest bone of all.

President Trump plans to announce his nominee for the Supreme Court on Tuesday, moving to fill a seat held vacant for nearly a year by Senate Republicans and touching off what is expected to be a furious ideological showdown early in his administration.

One who could roll back the rights of women and LGBT Americans, affect the course of justice for at least a generation. And colour Trump's government forever.

For while some are comparing that government to the one headed by Big Brother in Orwell's 1984...

Jonathan Manthorpe suggests that a better comparison might be found in Arthur Miller's The Crucible.

Miller used the story of the Salem witch hunts in the Massachusetts Bay Colony in 1692 and 1693 to frame his condemnation of McCarthyism. But what makes his play far more appropriate than Orwell’s book as a guide to the modern American political scene is that The Crucible is threaded throughout with the Christian religious fanaticism that is so deeply imbedded in the faction of the Republican Party that now controls Congress and the White House.

For as Trump's vice-president, Mike Pence, made clear the other day while addressing the anti-abortion March for Life.

Those fanatics really do believe that God is on their side...

They are the American Taliban.

American politics has been taken over by the Christian Taliban. They seem just as intent on imposing what they see as Christian religious law on the country as the Afghan Taliban — or, indeed, the Islamic State in Syria and Iraq — are on establishing Shariah Muslim law in those countries.

They are determined to sacrifice the lives of women like the Salem witch burners did back in 1692...

And that evil madness, which was revisited during the dark era of McCarthyism, should tell us all we need to know about the state of Trump's America.

Looking now at the list of people blacklisted as suspected left-wingers or communists is a timely reminder of the bigotry and ignorant intolerance that lurks near the surface in American civic culture.

The good news is that today's appointment, coming so soon after the Republicans blocked Obama's choice for Supreme Court justice, will almost certainly trigger the biggest demonstrations that country has ever seen... 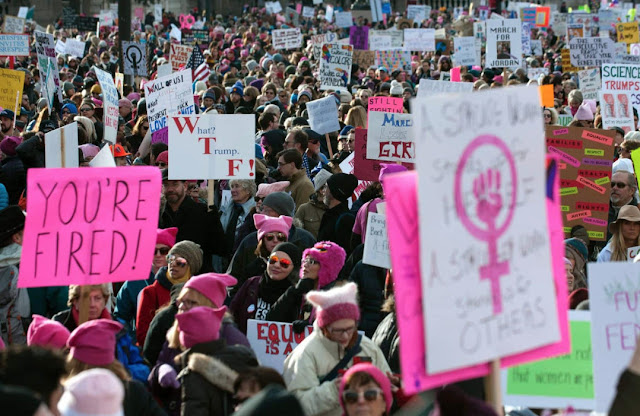 And will just as certainly lead to Trump's defeat in the next election.

But the damage will have been done.

And I will always be haunted by all those so-called progressives who kept wailing during the election campaign that "Trump is better than Clinton!!!!"

Do they still feel the same way today? What were they thinking?

And can they ever be forgiven?

It is ironic that the American right and the Sharia people are cut from the same cloth.

I can't get over the people who said that about Clinton. She was far from perfect, but she was Gandhi compared to trump.

Things may not go as President Bannon wants. Kennedy , while conservative, is not a right wing idealogue. A crazed far right zealot on the bench may force him away . Roberts is anxious to leave a legacy of achievement not destruction ( see the ACA decision ). A rabid judge on the right may shove Robert's centrist positions into the left camp.

Byron Muldoon tried to pack the court with right wing idealogues and got his ass bit time and time again when the judges chose to follow the law. Ask Harper how that worked out.

.. suggest you find a copy of Under The Banner of Heaven.. John Krakauer.. and see how justice can be distorted.. religion invented .. and the getting of 'god on your side' ..

LOL! Trump is the gift that keeps on giving!

How many women were burned at the stake during the Salem witch trials?

I wish I knew how to work Pepe the Frog into this thing. LOL! This is the best!

Trump is in a time machine destined for 1950 and pulling the rest of America along with him. The white male and good Christian culture was alive and well... although many of that era knew it could be better they were silent. As he approaches the landing strip turbulence and the ghosts of recent history who gave their lives for change obscure the target. His crew sensing the turmoil and the danger encourage him to dial in a new number where no one advocated outright resistance ... Salem 1692. His new education secretary DeVos with her creationist views wants him to dial it back 3000 years to meet the Creator, set the future and as any tourist rub shoulders with the dinosaurs that roamed the earth at that time. Hopefully the Trump time capsule will travel far into the past but not create a powerful enough vortex to suck America and the rest of the world with it!
And so the saga goes ...a)progress...b)difficulties...c)reset to the last stable point...d)new progress or oops we missed the docking bay welcome to prehistoric times.
RT

I may be wrong, but I think the Salem witches were hanged. Burning at the stake was an Inquisition thing.

Wyland have “The Answer” to presidential inauguration blues
https://www.thelineofbestfit.com/new-music/discovery/wyland-the-answer

Tomorrow, the world will look on in horror as Donald Trump is inaugurated as the 44th president of the United States., Indie four-piece Wyland have tackled the Trump-induced malaise the best way they know how. "It got us really down to see people so divided,” they said, of November’s election results. "So we decided to write a song about it."

“The Answer" is a swirling indie-rock track taken from Wyland’s upcoming EP Snake Hill, due out 3 March. The single comes complete with catchy chorus, radio-friendly guitar solo, and slightly cheesy but ever-so-appropriate lyrics. Accompanied by adorable stop-motion visuals of a play-doh alien encounter, it’s (almost) enough to make you forget all the shit that’s about to go down.

"The video, created by the incredibly talented Hannah Darrah, is a metaphor about how we would like to bring people together," the band explain. “It's about how we wish we could help to fix the problems of the world with music as our sword."

Snake Hill is out 3 March.

Simon: "And will just as certainly lead to Trump's defeat in the next election."

Does anyone here seriously think Trump will be President even 6 months from now?

How many know there were less abortions performed in the US under Democratic presidencies. Why do you think that is?

There are pro-life Democrats, such as Democrats for Life of America:

Chittister commented: "I'm opposed to abortion. But I do not believe that just because you're opposed to abortion that that makes you pro-life. In fact, I think in many cases, your morality is deeply lacking. If all you want is a child born but not a child fed, not a child educated, not a child housed and why would I think that you don't? Because you don't want any tax money to go there. That's not pro-life. That's pro-birth. We need a much broader conversation on what the morality of pro-life is."

I’m Catholic and ‘pro-life.’ Here’s why I would never vote for Donald Trump.
http://fusion.net/story/367080/trump-catholic-abortion-special-needs/

Obama’s Culture of Life: The Abortion Rate Has Fallen 13% Under This President (February 3, 2014)
http://www.politicususa.com/2014/02/03/newsflash-republicans-abortion-rate-fell-13-president-obama.html

If You Are Truly Pro-Life, You’d Vote Democrat
http://www.patheos.com/blogs/faithfuldemocrats/2012/09/if-you-are-truly-pro-life-youd-vote-democrat/

Republicans Talk A Lot About Lowering The Abortion Rate, But They Don’t Actually Deliver (February 4, 2014)
https://thinkprogress.org/republicans-talk-a-lot-about-lowering-the-abortion-rate-but-they-dont-actually-deliver-cea7537eb87b#.m5gao61dp

Pro-lifers who support Donald Trump are kidding themselves — and hurting the movement
http://www.vox.com/first-person/2016/10/25/13380272/donald-trump-pro-life-abortion

Donald Trump Would Set Back The Pro-Life Cause More Than Hillary Would
https://thefederalist.com/2016/10/20/trump-presidency-hurt-pro-life-more-than-hillary/

There is no Pro-Life Case for Donald Trump
https://mereorthodoxy.com/no-pro-life-case-donald-trump/

Hillary Clinton Is the Best Choice for Voters Against Abortion
http://www.christianpost.com/news/hillary-clinton-is-the-best-choice-for-voters-against-abortion-170258/

Why pro-lifers absolutely must not vote for Donald Trump
http://theweek.com/articles/659320/why-prolifers-absolutely-must-not-vote-donald-trump

hi Steve...so it seems. I distrust religious fanatics of any kind, and needless to say they all hate me...

hi anon...yes I know, I realize Clinton was flawed, but I always felt that Trump was a fascist, and I thought Americans should have gone for the lesser evil. Still if we survive Trump I think he will do us a favour, by preparing the ground for a left-wing movement for real change. So in the end he may turn out to be our useful idiot...

hi rumleyfips...yes that's true, the higher courts can change judges, and Harper certainly learned that lesson the hard way. But while Trump has appointed a fairly reasonable right-winger, I believe the idea is to get Kennedy to retire so he can appoint a harder line judge. And should some of the other judges be forced by old age to resign, we'll have a Trump court for the next twenty years...

hi salamander...thanks for the suggestion I'll look that book up. Although god is on our side isn't she?

hi anon.... I wouldn't laugh too loudly. Preventing women from getting abortions can lead to unsafe abortions and many many deaths. But maybe you can sell Pepe to the French, they love frog's legs....

hi RT....reading your comment I got a vision in my head of Trump actually materializing in 1692, looking like a talking turkey, and having to prove to the fanatical pilgrims that he was not the devil himself. Only to fail miserably and be roasted alive. Or at the very least be forced to flee for his life. I admit that things look a little bleak at the present time, but I still believe it will be the shock we need to create a real movement for change. The Democratic establishment
seems paralyzed and out of it. And that should help the reformers turn it into at the kind of party that can crush the Republicans in the next election. However, as you point out, it will be a choice between progress and catastrophe. And at this stage nobody can predict where that madman might take us...