The Continuing Adventures of the Con Clown Kellie Trump 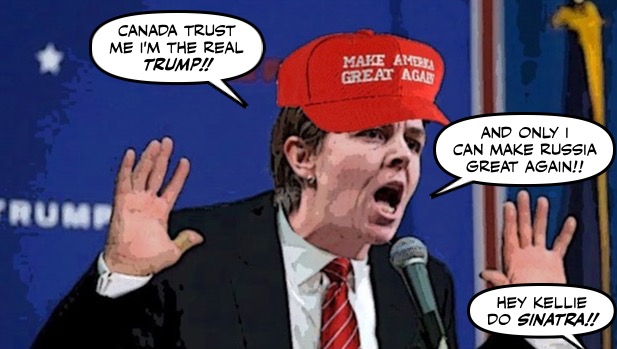 As we all know too well, and too painfully, the Con clown Kellie Leitch has been making an absolute fool of herself for what sometimes seems like forever.

With the worst Donald Trump impersonator third-rate drag show act Canada, and possibly the world, has ever seen.

Where Kellie Trump claims that only she can save our Canadian values, while violating every one of them.

And even more outrageously if that's possible, claiming she's against the "elites" when Leitch herself is one of them. 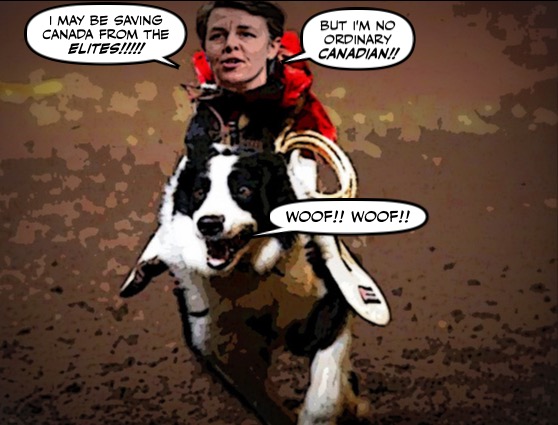 For as Maclean's recently reported, God help anyone who forgets to call her DOCTOR Leitch.

“You’re lying,” Leitch yelled, according to Wong. “This is unacceptable. Even the prime minister [Stephen Harper] introduced me as Dr. Kellie Leitch this morning. I’ve earned all these titles. Do you have these titles after your name? No.” Wong said Leitch then threatened to call Harper if the cards weren’t fixed. (Leitch’s campaign didn’t respond to a request for comment.)

Which it must be said isn't easy, since she mentions it about fifty times in every speech.

But now it seems that having these eight letters before her name "The Hon. Dr" isn't enough to satisfy Kellie Trump.

For at a recent meeting with a group of Con students at McGill University, she escalated her demands... 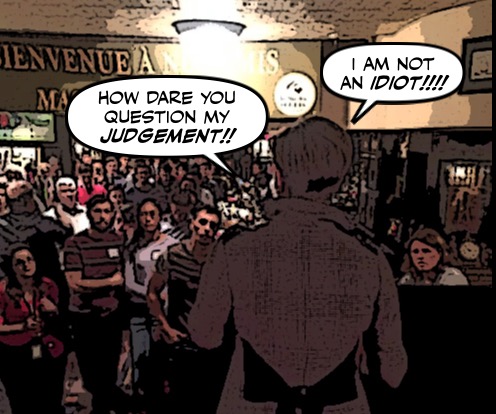 When one of the students questioned her plan to eliminate the Indian Act without consulting our aboriginal people, she reminded him that she has TWENTY-TWO other letters at the end of her name.

Only to have to revise those numbers down a short while later... 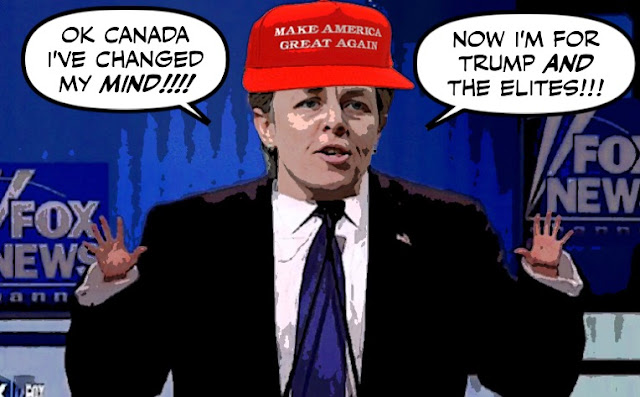 The kind of idiot who would think that her Trump impersonation act would be popular in a country, where most Canadians are deeply worried by what the real Donald Trump might do when he becomes president.

And need to be reminded about him like they need a hole in the head, or a nuclear war... 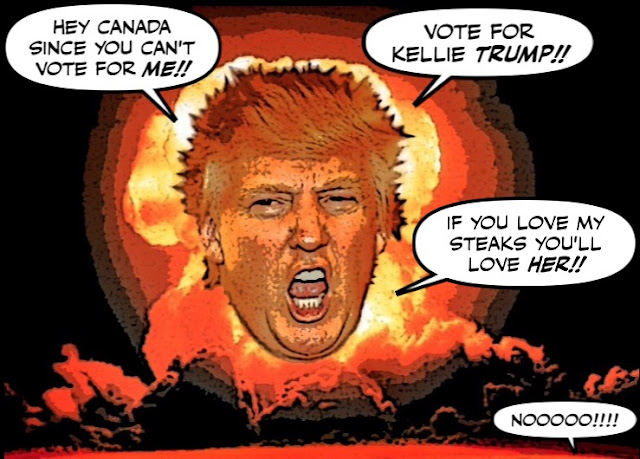 But then I suppose it's only fitting.

The Cons lost touch with Canadian values a long time ago.

Stephen Harper made the party in his own image, and left it in ruins. 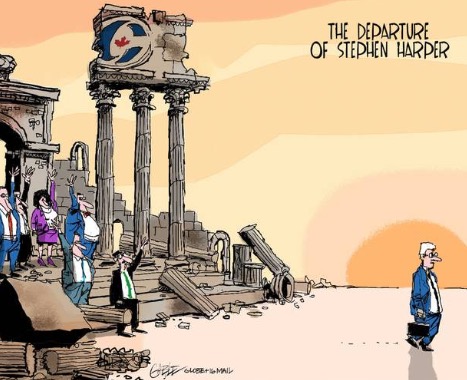 And with a little bit of luck, the Cons won't be back for at least a generation...

Simon what do you make of a potential trade war with the United States? I have no doubt we could gut it out in the long run, and the current government is doing the right thing in trying to open up new trade markets, but what I worry is that people are so whiney and weak these days that even a minor recession will trigger us into a Leitch or O'Leary kleptocracy. Of course if Trudeau were to stand up to the smelly piece of foul and vile shit, our country might rally around that (as they should) and value our sovereignty over short term economic consequences.

While we're at it, I'd like to add 50 letters before her name, smug, racist, divisive, opportunist, hypocrite, deluded and most of all idiot.
Given all her scholarly accomplishments, it's unfortunate that she failed to harbor a compassion among any of them.
JD

My neighbour on the right is going to circumcise their kid. On the left they drag their kids somewhere every Sunday. Across the street they are planning on taking their kids CAMPING. Think of the children. Whats the hotline? BARBARIC CULTURAL PRACTICES!

Loved the caption of only she could make Russia great again.

Technology is pushing structural change at an ever accelerating pace. This in turn causes stress hence the whiney outcry and tendency to follow Retro Cons with simplistic messages and false promises. Evolution is not a straight line but is like a tall building with floors added as time progresses. During times of stress its normal to revert back to a lower floor and "pile on" to test its integrity. Hopefully the floor is solid and we move on to the next level as opposed to crashing through into the basement. The next level is where automation and technology spins off enough efficiency to provide everyone with the basic essentials of life and allows them to follow their dreams. More advanced technological societies have already crossed that threshold but the benefits are not proportionally distributed because to do so would weaken the power structure. Poor people not beholden to their benefactors is a scary thought. Hopefully the floor holds; the Leitchs O'Learys and Trumps of this world get tossed out the window and civilization moves on.
RT

Gee, I only have 15 letters after my name - all educational or professional, and non are political. My last name has 12 letters - does that count?

I write the blog brokennews.press and i want very much to use one of your images- the one of the Trump Clown with the red nose and the cig in his mouth. First I need your permission and second, the file is too small. If permission is granted I would reference your blog with a link. Is this possible?

hi anon 1:03...I'm afraid the chance of a trade war is very high indeed, and it very well could cause not just a minor but a major recession. Especially if Trump gets into a tariff war with China. Canada is in great danger, and Justin Trudeau faces the greatest challenge of his political career.

hi RT...good analysis, and unfortunately a bit too complicated for those who prefer simple solutions to follow. Many of Trump's followers don't understand how technology is mainly responsible for the loss of so many jobs. They prefer to blame the Mexicans for their troubles. The day they finally understand they've been conned by Trump is going to be a bitter day indeed...

hi JD...yes, Leitch seems to lack any empathy or compassion. It's all about her and her giant ego. I don't know if I've mentioned this before, but quite a few of her patients on a doctor rating site claim her bedside manner leaves something to be desired. Which tells me everything I need to know about her. Let us hope this sorry chapter is the final chapter of her political career...

hi anon...well if I knew that my neighbours were planning to circumcise their newborn child I would call the Barbaric Cultural Practices Hotline immediately. We don't do that where I come from, unless you're Jewish, and the very thought gives me a pain you know where... ;)

hi e.a.f...thanks, I'm glad you liked that caption. Leitch hasn't said that yet, but her campaign is such a train wreck I'm sure they soon will. It's too bad she has collected so much money. Because now would be the time to quit, and hope that Canadians have short memories...

hi anon....hmmm...I don't know. It's enough to convince me that you are a smart person, but convincing the idiot Kellie Trump might be a lot harder. As you know she believes you need twenty-two, or make that eighteen letters to qualify as a member of the elites, so you can fight them all the better. Her campaign is crazy and so is she...

hi Bob... although I try to use as many of my own graphics, I lifted that one off the internet somewhere, and I have no idea who made it. Except that whoever did has a lot more talent than I have. Sorry about that...

It's interesting how the Hebrews/Jews (and then Muslims) adopted circumcision (to set them apart) when it was actually quite common in the ancient Middle East. To the ancient Egyptians it was an art form.

Her campaign manager Nick is busy in B.C. also. She can always send the money to Christy Clark, the poor dear has only $12 Million to fight the NDP in the election in May.

Wow, just when one thinks she couldn't become even more of a cartoon character, she starts to hold her titles and post-nominals over people's heads?

Sorry, Chump--oops, make that Dr. Chump, Ben Carson's already destroyed the notion that brilliance in one field makes you "smart", let alone empathetic enough to navigate a federal policy that affects the most downtrodden. Carolyn Bennett (my former MP) has at least built a relationship with First Nation's peoples that doesn't start with sneering contempt, actually demonstrating that she wants to solve problems and work with aboriginal leaders to accomplish them. Could she do more? Sure, but I'll take her over Dr. Chump any day.