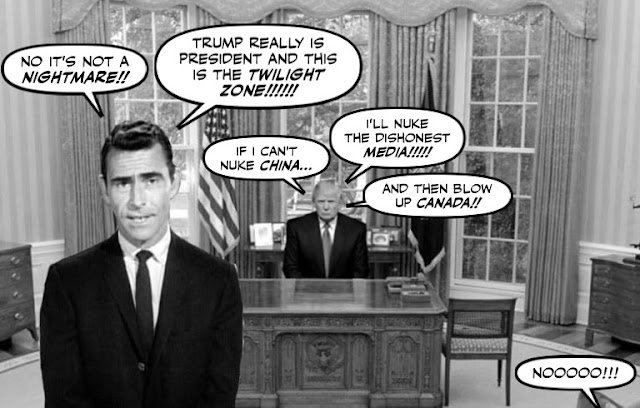 As you know, I can't help feeling like I'm trapped in a surrealistic nightmare, or a scary episode of the Twilight Zone.

Where the deranged demagogue Donald Trump is the president of the United States, is demolishing its government, department by department.

And threatening to lead the world to economic disaster, and even nuclear war.

But while while this episode does reflect how I feel about the horror of the situation. 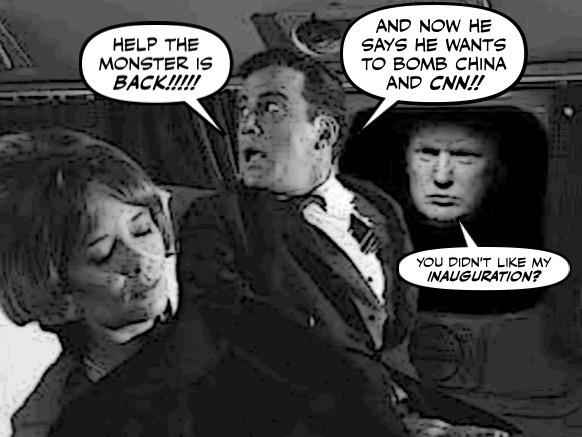 I'm not sure it reflects the true horror of Trump.

Not when I read that some of his own aides are calling him a monstrous baby. 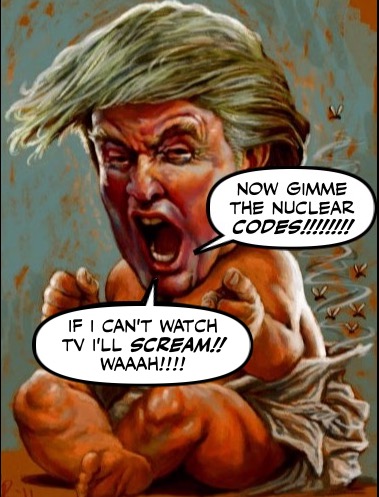 The president is a 70-year-old child whose TV time must be closely monitored — because any news story that upsets his ego will trigger a temper tantrum followed by irrational demands that his indulgent, overwhelmed guardians will be helpless to refuse.

On Sunday, one of the president’s confidantes told Politico that his staffers have to “control information that may infuriate him,” a task made difficult by the fact that the leader of the free world “gets bored and likes to watch TV.”

One so easily angered by news reports that his inauguration wasn't as big Obama's, he would send his hapless stooge Sean Spicer out to lie like a thief... 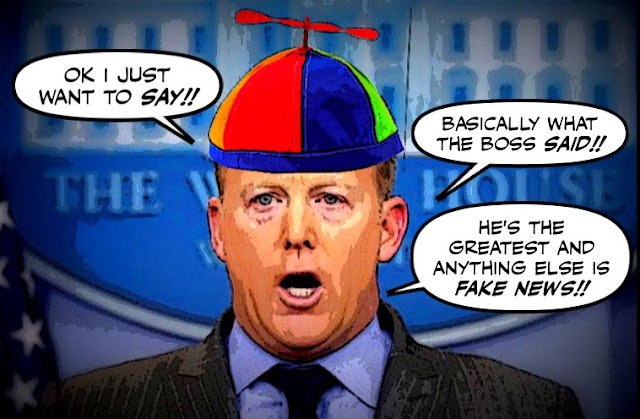 And publicly humiliate himself.

Only to complain later that Spicer didn't lie furiously enough.

After forcing Spicer to baldly lie to the White House press corps about the size of his inauguration crowd, the president fumed that his press secretary’s performance was “not forceful enough.” According to Axios, Trump was also incensed by Spicer’s poor taste in suits, and is already considering treating the former RNC staffer to his signature catchphrase.

And is apparently already getting ready to fire him, after only a few days on the job.

Which makes Trump appear more like a nasty maniacal child, with the power to bully and kill.

A monstrous man child that nobody can control, for all are too afraid of him.

And that should terrify everyone now that Trump has his finger on the nuclear button.

How on earth did we get to this nightmare place? 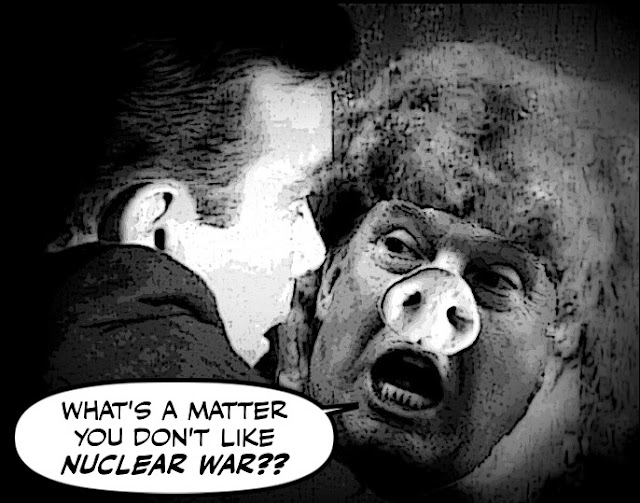 Rise up wherever you are.... 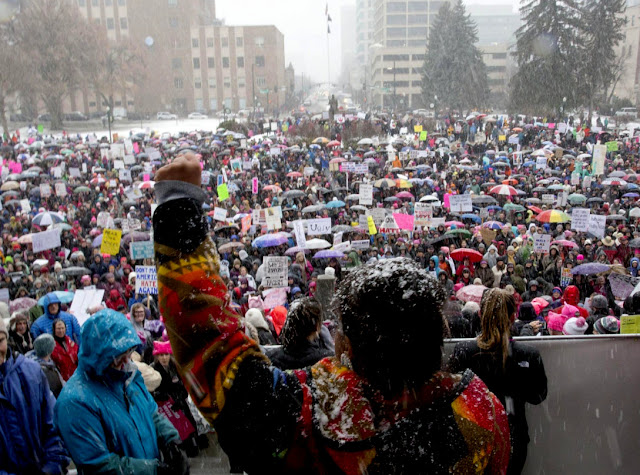 And demand that Donald Trump be removed from office before he kills us all... 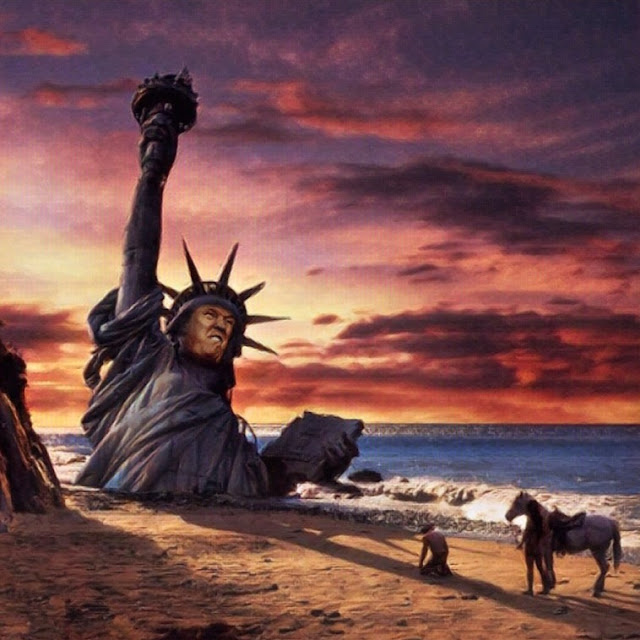 I watched a 2 part episode of Frontline from last week titled "The Divided States of America" on PBS. It basically discussed how the right turned on the establishment republicans, the birth of the Tea Party movement, the onslaught of right wing talk radio and websites, and how the Obama presidency divided the nation in a way not seen since the Civil War. After watching it, I really understood how we arrived at this place with all the lies and conspiracy theories becoming mainstream and the sheer amount of faux outrage and hyperbole demonstrated by the loud mouths on the right (Limbaugh, Hannity, O'Reilly, Levant, Breitbart, WND, etc.) I don't know what it's going to take for these people to finally wake up and see reality. The defence of "alternative facts" is shocking and how they are not seeing Trump's insecurities and childish tantrums just speaks to how deluded they truly are. How do they see this man as "presidential"? I do believe they won't be happy until the nukes are flying and everyone is dead. And that, sadly, is a very real possibility now.


Rob Ford was funny, well for us who don't live in Toronto (Merci au bon dieu). Trump is like Ford on steroids. He is madly dangerous.
Though I am impressed by his cabinet. I did not realize it was possible to assemble such a corrupt and totally incompetent group of people.

I do find it encouraging that his staff are being driven to distraction. We aren't the only ones. The Women's March was also comforting. We just need to be strong, speak out, and not accept this. We also need to help our US family and friends.

Thank you for some comic relief:)
TS

Hi aka Joe... I saw one of those episodes and it really was excellent and absolutely infuriating to see how those tea baggers tried to bring down a decent president. When I hear Trump asking Americans to unite behind him I don't know whether to laugh or vomit. And all I hope is that our neighbours give him a good dose of his own medicine.

hi jrkrideau...I'm glas you qualified your remark about Ford, because for those of us who live in Toronto he was an absolute nightmare. But at least he didn't have the nuclear codes within reach. And as for Trump's cabinet it's got so many billionaires in it, it's almost a caricature of the 1% starring Zero Mostel. And goodness knows where they might take us...

hi TS...yes it's good to know that they are already fighting themselves. It's our best hope of neutralizing Trump or at the very least restraining him. before the mid-term elections hopefully clip his wings. And yes, I hope family and friends in the U.S. so I'm signing up to support the Maine Resistance... ;)

thats funny. his cabinet has changed at least three times; most are composed of yes men