The Mosque Massacre and the Dark Legacy of Stephen Harper 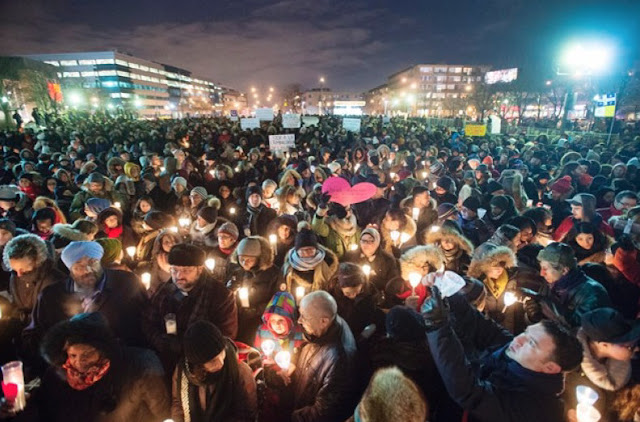 As the country mourns the victims of the massacre in that Quebec City mosque, we are also finding out more about the terrorist who shot them.

And what might have motivated Alexandre Bissonnette to commit such a brutal and cowardly act.

The suspect in the deadly attack on a Quebec City mosque was known in the city’s activist circles as an online troll who was inspired by extreme right-wing French nationalists, stood up for U.S. President Donald Trump and was against immigration to Quebec – especially by Muslims.

But even though Trump's anti-Muslim campaign may have emboldened him, the bigotry that inflamed him was nurtured right here in Canada. 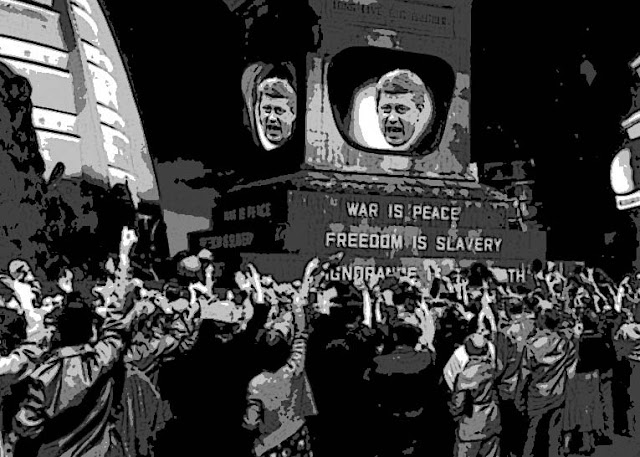 During the Dark Decade of Stephen Harper.

Long before Donald J. Trump and some Republicans began demonizing Muslims and “radical Islam,” the government of Mr. Trudeau’s predecessor as prime minister, Stephen Harper, was maligning Islam and discriminating against Muslims.

Mr. Harper, first elected in 2006, waged cultural warfare on Muslims and used every opportunity to tie terrorism to Muslims. The Harper government banned the niqab, the veil worn by some Muslim women, from citizenship ceremonies and systematically cold-shouldered mainstream Muslim organizations.

In 2015, he suggested that mosques were incubating radicals. He constantly claimed that the West was fighting not just the Islamic State, but was at war also with “the international jihadist movement.” Heintervened to slow the admission of refugees from Syria, saying some were potential terrorists, and prioritized Christian asylum seekers from Syria and Iraq. Sound familiar?

The bigot soil may have been tilled by Quebec's fractious debate over the accommodation of religious minorities.

But it was Harper and his Con regime who brought that ugly debate back to life... 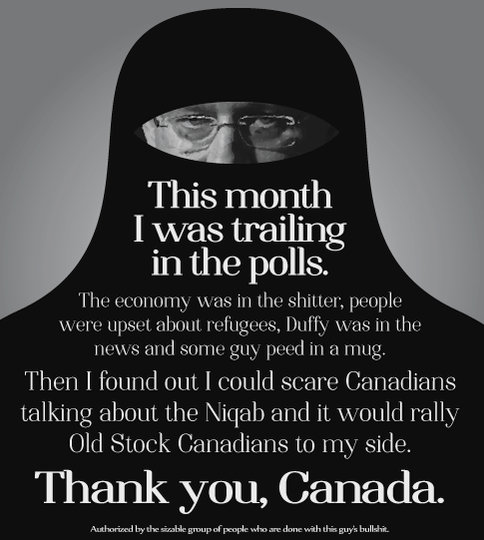 By making the last election campaign all about niqabs and Muslims. 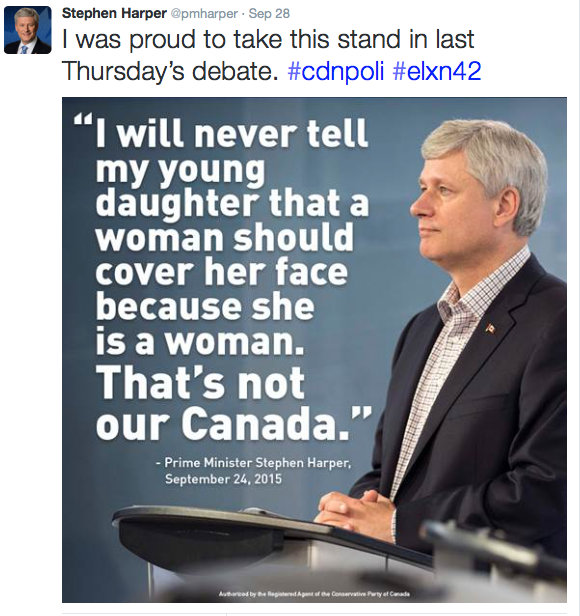 And Kellie Leitch and other Cons are only watering the seeds that Harper planted... 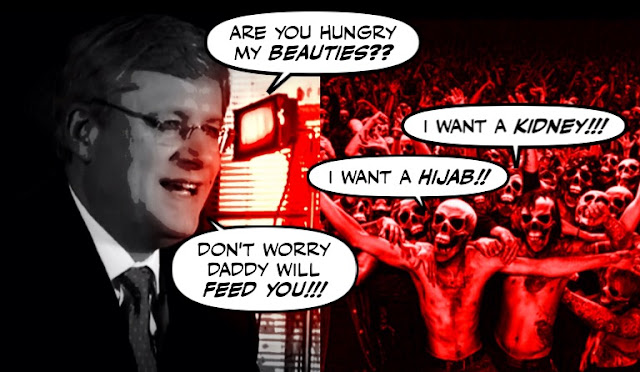 And by so doing can only encourage other violent right wing losers like Alexandre Bissonnette... 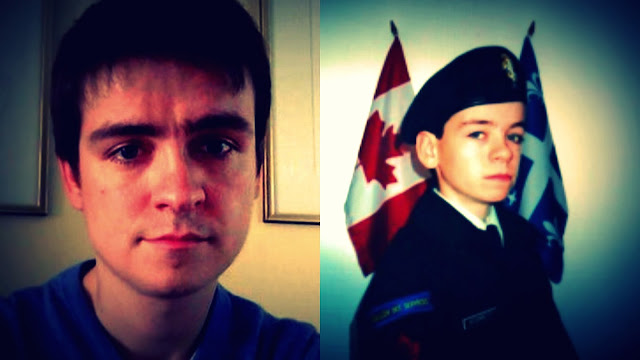 As Siddiqi points out, we may have a new and better prime minister... 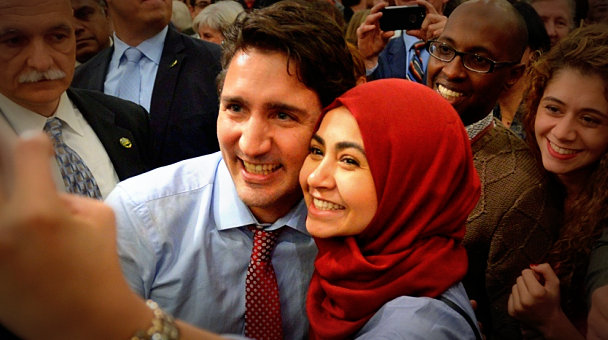 Mr. Trudeau reversed Mr. Harper’s policy on Syrian refugees and welcomed more than 35,000 refugees during his first year in government. Today, hardly a week goes by without my hearing about a neighbor or friend, or a church, synagogue or community group, going to the airport to welcome their Syrian family.

And we may live in a better Canada.

I remain an incurably optimistic Canadian, and I want to believe that Canada is still not the United States. But as Sunday’s attack showed, we face the challenge of undoing the damage of years of suspicion and bigotry.

And until that legacy is finally buried it will continue to poison this country... 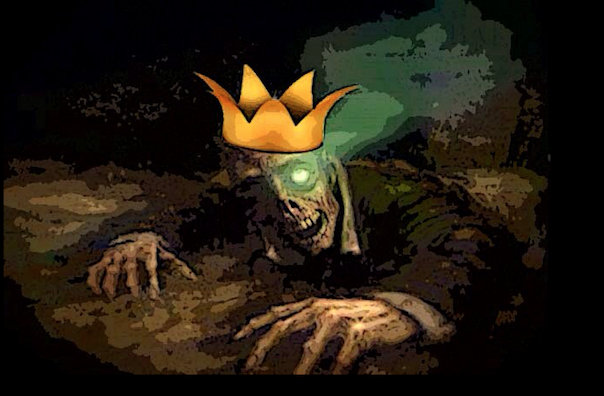 Harper deserves a lot of blame, but please do not overlook the Quebec politicians who have set this to simmer for over a decade now. From Herouxville to reasonable accommodation to the Charter of Hatred, the Mario Dumonts and Pauline Marois' of the world sowed this seed long before trump or Harper. Do not forget the Bloc and their hideous niqab commercial of 2015.

So the question now is how do we bury Harper's legacy when we have his spawn running around the country stoking the same vile hatred that helped push this young man over the edge. Will Kellie tone down her racist campaign? I highly doubt it, but hey, her thoughts and prayers are with the victims families and if she could lend her bloodied hands she would.
Our hate laws need a serious revamp to deal with the scourge of Rebel media and its offshoots. These sites are like candy to the disturbed individuals like Alexandre Bissonette, who took things to the next level. Are there more like him? I'm afraid there are.
As for Kellie and company, we need to keep their feet to the fire and destroy them at the polls. We destroyed Harper, now it's time we do the same to his spawn and dark legacy.
JD

There's a term for this that I've been deploying more and more often that I see this: stochastic terrorism. http://stochasticterrorism.blogspot.ca/

I'm not a Muslim myself. I'm actually a pretty strident and vocal atheist. I'm of the opinion that blind faith is not a virtue and that it is actually quite capable of making otherwise good people do awful things. That said, I'm not blind to the institutional benefits and perils inherent in organized religion. The same organization that has maintained a deep commitment to economic justice also is virulently anti-LGBT and concealed sexual abuse for decades (the Catholic Church). That's why we fight the institutions when they go wrong, we don't pin the wrongdoings of the institution on all adherents of the faith.

What makes modern conservatism (yes, that's small "c" conservatism) in places like Canada, Europe and the US purveyors of stochastic terrorism is the hyping of the threat of Islamic fundamentalist extremism as somehow a clash of civilizations. Seeing relatively benign elements of a faith such as clothing to be "incompatible" with Canadian values is what stokes the fires of intolerance. After all, if something's incompatible with your very way of life, what do you do with it? You're going to want to scour it from your community, and all it takes is one person to interpret that violently to give you an event like Quebec City. Doesn't matter that the folks who went to that mosque are in all likelihood your hockey-playing neighbours who want the Quebec Nordiques back in town as much as you, to the modern conservative movements they're Muslim first, neighbours second.

Stochastic terrorists are what people Harper and Leitch are. They can hide behind their plausible deniability all they want, but the internet has a long memory. As do many of us Canadians. Je me souviens.

hi anon...everything you say is true, and I did say that Harper planted his seeds in fertile soil. I am familiar with the whole sorry story. But what I hold against Harper is that he revived all that ugliness just as it had finally been forgotten, except by the Bloc losers. And helped spread that disease to the rest of Canada...

hi JD...the way we bury that bigot legacy is by educating the ignorant, cracking down on the hate mongers, and last but not least burying the Harper Party. Although Kellie Leitch has got most of the headlines, it doesn't seem to be helping her that much in the leadership race. And for every bigot that supports her and Ezra Levant there are about ten thousand Canadians at least who hate the very sight of Trump, and the last thing they want is a squeaky voiced Trump impersonator. I know everything is up in the air right now, but after a few more weeks of the orange oaf, I think that will become only too clear...

hi anon...thanks for that, I must admit that I had never heard of the term stochastic terrorism before. But my views on religion are exactly the same as yours, and Leitch's smarmy plausible deniability doesn't fool me for a moment either. Thanks to what happened during the last years of the Con regime, I don't think she'll fool many Canadians either.
We all remember her barbaric show, and most of us don't want a repeat performance...


>>> They were assaulted by a-holes given succour and encouragement by the irresponsible Harperites.
canadian citizen • 4 months ago
.....
Google "stochastic terrorism" >>>