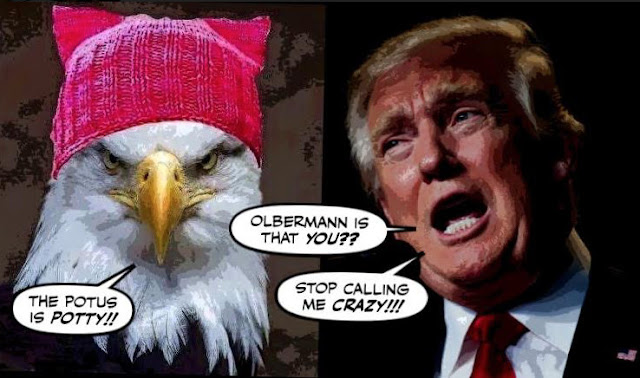 With every passing day Donald Trump slides deeper and deeper into madness. He can't accept that more people attended Obama's inauguration than attended his, despite the photographic evidence.

The thought that even more people attended the Women's March has every voice in his head screaming in agony.

And now he's brooding again about losing the popular vote to Hillary Clinton, and sounding even more like a maniac. 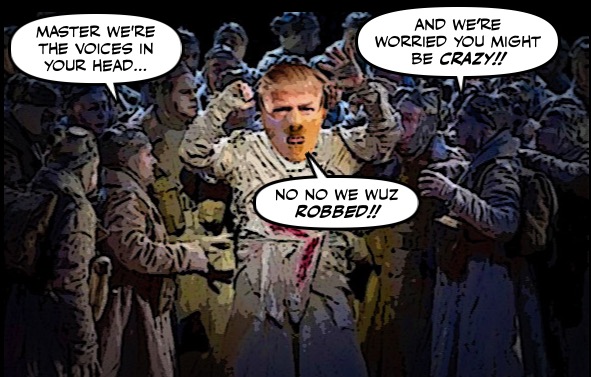 By claiming the popular vote was stolen by millions of illegal voters.

Days after being sworn in, President Trump insisted to congressional leaders invited to a reception at the White House that he would have won the popular vote had it not been for millions of illegal votes, according to people familiar with the meeting.

Even though the evidence it wasn't couldn't be clearer.

The claim is not supported by any verifiable facts, and analyses of the election found virtually no confirmed cases of voter fraud, let alone millions.

Then there is Trump's bizarre threat to seize Iraq's oil fields, which is making the Iraqis and his own generals very nervous...


And to make matters even worse, Trump is now channelling the equally deranged Kim Jong-un... 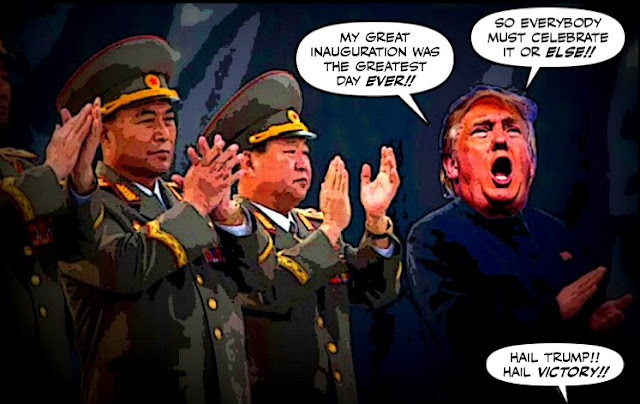 By declaring his inauguration day to be a National Day of Patriotic Devotion.

Donald Trump has echoed North Korea’s leader, Kim Jong-un, after declaring that the day of his inauguration should be a “national day of patriotic devotion” – a rallying cry that would not be out of place in the secretive state’s propaganda.

Trump’s proclamation, which was made official on Monday, has been uttered by Kim in speeches to his 1.2 million-strong military and members of the ruling Korean Workers’ party in recent years.

And so desperate is the situation, the fiery Keith Olbermann has been reduced to practically begging Trump's supporters to admit that their leader is both crazy and dangerous.

Will Trump supporters be swayed by rational arguments? I doubt it... 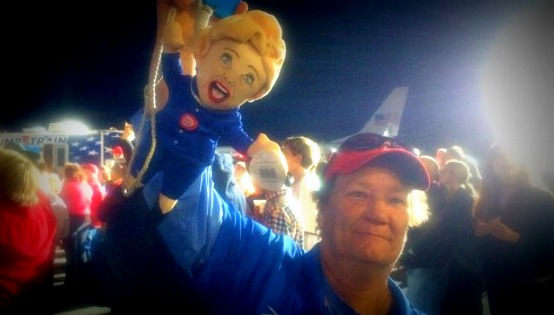 Because sadly many of them are as crazy as he is.

We are in the Twilight Zone...

And as Alex Salmond, the former First Minister of Scotland, said the other day.

"God bless America and God help the rest of us...."

Keith certainly puts things into perspective doesn't he?
I can only hope that Trump's family and inner circle will see the lunatic he has become and pray there's a mechanism that allows his removal from office due to mental health issues.
JD
Simon, I hope you cover this story re: Sheila Gunn Reid and Canada's fake news site.
http://www.huffingtonpost.ca/2017/01/23/rebel-womens-march-edmonton_n_14337912.html

Two interesting things I read in last day. One from WP, where Trump insiders were describing chaotic weekend trying to keep him contained. The other was that his staff were worried that he would get bored and turn on the tv rather than getting down to work.

The GOP has their hands full. We can only hope that the Founding Fathers got this one right, and that his days are numbered.

Republicans are lost, but remember the largest voting block are independents. There has to be some hope there. Many of them voted for Obama, many of them would have voted for Bernard.

TPP scraped. Unblocked the Keystone XL. Poor Obama's legacy is gonna be destroyed by the end of the week. Looks like the protests have died down, so much for the resistance.

You actually expected better from 'progressives'. Trudeau just sold them down the river, so expect a lot crying and denial, but little else.

WASHINGTON (The Borowitz Report)—Vice-President Mike Pence has issued the following message to the American people:

Dear American People, What with all the hoopla and hullabaloo of Inauguration Week, we didn’t really get a chance to get to know each other. And so, if you don’t mind, I thought that I’d take a minute or two to tell you a thing or two about Mike Pence.

I’m what most people would call a “fun guy.” In my spare time, I enjoy golf and heterosexuality. And I’m something of a voracious reader. My favorite book, of course, is the Bible, but I enjoy other books, too. I’m a big fan of “The Da Vinci Code, ” which has a lot of stuff about the Bible in it. And Paul Ryan just gave me a copy of “Atlas Shrugged, ” by Ayn Rand. I just started reading that one, so I haven’t gotten to any parts in it about the Bible yet, but it’s darn good.

Another thing I read recently, and it’s probably become my second-favorite piece of reading material right after the Bible, is the Twenty-fifth Amendment to the United States Constitution. It’s all about how to remove the President and replace him with the Vice-President. I have to admit that it was a kick to start reading the dusty old Constitution for the very first time and see yours truly right in there!

Whenever I read something great, I tell everyone I know to go out and read it, too. And so, my fellow-Americans, I encourage each and every one of you, history buffs or otherwise, to read the Twenty-fifth Amendment today—especially Section 4, which is a little complicated but really exciting, too. If you enjoy reading it as much as I did, let me know. I’m in my office in Washington and you can reach me anytime—I’m of sound mind and body.

Well, I’m super-glad we had the chance to get to know each other a little better. Until next time, here’s Mike Pence saying, God bless America. And God bless the Twenty-fifth Amendment.

Andy Borowitz is a New York Times best-selling author and a comedian who has written for The New Yorker since 1998. He writes the Borowitz Report for newyorker.com.

That Russian hacking is impressive. I wasn't aware that a brain could be hacked, but I stand corrected!

I wonder how much of that being reduced to begging Trump supporters to see what they have done is rooted in his inability to get those on his own side, especially the farther left part of the spectrum, to understand what THEY have done. There still seems to be this wafting of equating Trump and Clinton as equally bad, one noted Canadian leftist of our mutual aquaintence refers to her routinely as the corrupt mass murderer Hillary Clinton. He is far from alone in that POV in both this country and down south to this day, and I find that mindset truly boggling. AS I noted to you before, the Trump win underscores that theory about the political spectrum being a horseshoe with the extremes having more in common with each other than with the moderates of their own side (whom they tend to see as sell-outs, traitors, etc, and both, that IS something both sides like to do at the extreme) and centrists.

As mad as I am at those who voted for Trump, those that argued no real difference, or that a destroyer is fine, better than a conventional status quo politico, from the so called progressive left (the so-called is because of the willingness to sacrifice all those minorities, all those without white privilege in the process) are even more infuriating. That is also a direct result of electing Trump over Clinton, but hey, who cares about a bunch of coloureds, Muslims, queers, and drag queens/fairies, and other persecuted groups the left/progressives claim to care about protecting so much as a core part of their political identity, amirite? (for those that need it, unlike Simon, this is meant VERY sarcastically in tone).

In some ways Simon I find it is the so called "true liberals/lefties" that are the worst threat, because they are so caught up in their purity ponies and their smug self congratulations for being so pure and correct that they sold out pretty much every value worth having at the human level, not least the protection of the weakest among us, while haranging anyone that does not share their POV as being dupes to fools to being liars and traitors. Reminds me a lot of what we see from the far right against its own moderates.

I judge people by their actions, and the foreseeable consequences from them when they make their decisions. In this case anyone that can still argue there was no functional or significant difference between Donald Trump and a GOP Congress versus a Hillary Clinton and a GOP Congress, well they have shown just how far into their own rabbit holes they have gone down. I find such arguments appallingly smug, self centered, and all around insane/moronic.

It is time and past time the purity ponies of the left/far left started realizing that even a flawed vessel on your side is still infinitely better than something like a Trump on the other side, and it is not you and your precious self that is most likely to be reamed by the realities of Trump, but the poorest and most disadvantaged, the people you all are supposed to not just represent but be the final line of defence for. Sue me if I find you all are failing miserably.

Sorry Simon, but this is getting to be a very tired argument I keep seeing over and over to this day from such people. I think Obermann may be to the point where he figures he can find more people willing to open their minds in Trump's camp than he can on the far left of his own side, which given his own position in that spectrum I find very telling. And sadly, not beyond believing/seeing end up be the truth/reality too.

hi JD...yes, it's not easy to keep being an angry voice, but I thought Olbermann's piece was pretty good, and hopefully he won't use that peace sign again. As for Sheila Gunner Reid, I had no idea the story was so complex and even Laureen Harper had waded into the fray. Thanks, I see what I can do about it...

hi TS...it's frightening isn't it? He's either a compulsive liar, or he's living in his own parallel universe. And either way we're in trouble. The most powerful man in the world is out of his mind, and goodness knows what that orange oaf might do...

hi anon...the latest polls I've seen suggest that Trump is already losing many of those independents. So if the Democrats can get their act together, and get a new and better leader hopefully those independents will support our side in the next election....

hi MC...the TPP was always going to be killed, the Keystone XL pipeline will only unite environmentalists against Trump, and Obama's legacy will survive your great leader. I'm telling you this is just a historical blip. It will be over before you know it, and progressives will rule the roost again...

hi anon 6:23...I just saw the latest polls and I suggest it's the Cons and their supporters who should be crying. Trudeau is still incredibly popular, while the Cons are going nowhere...

hi David....thanks for that. I'm pretty sure Pence will eventually get the nod, too many Republicans prefer him to Trump. It remains to be seen who will install him, the Republicans or the military. No nation on earth can govern itself for long with a president like him...

Sounds good Simon. I know the truth is out there and I'm pretty sure it isn't what the Rebel says it is.
JD

I like science fiction and fantesy but it should have some coherence. A Fox news report is not even close. Thanks for the link. It was fun albeit scary.