How The Media Made Kellie Leitch Our Trump Impersonator 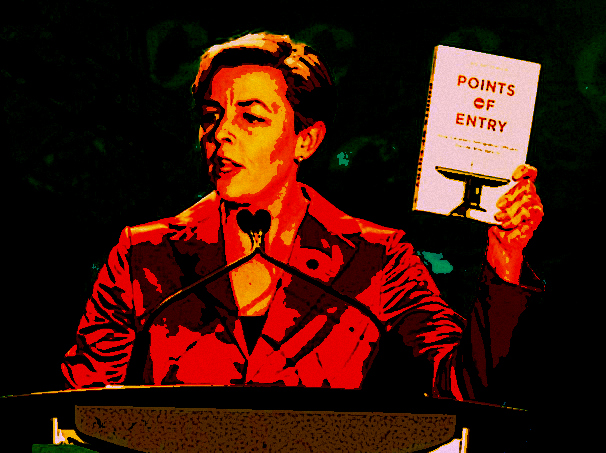 I must admit I still find it hard to believe that an educated person like Kellie Leitch is doing what she is doing.

Trying to whip up xenophobia for crass political purposes. And sounding more extreme   with every passing day... 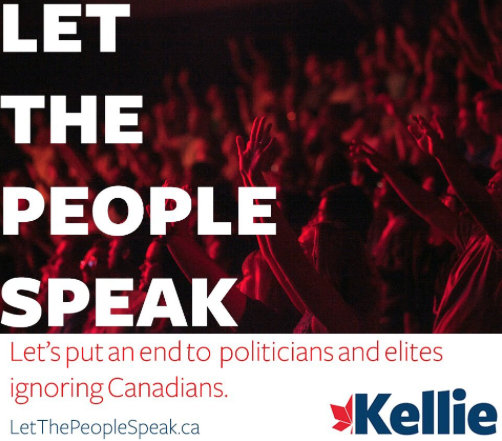 Or more insane. For what else can you call a member of the elites inciting her own supporters to attack others like her?

Or calling on them to undermine the will of Parliament. 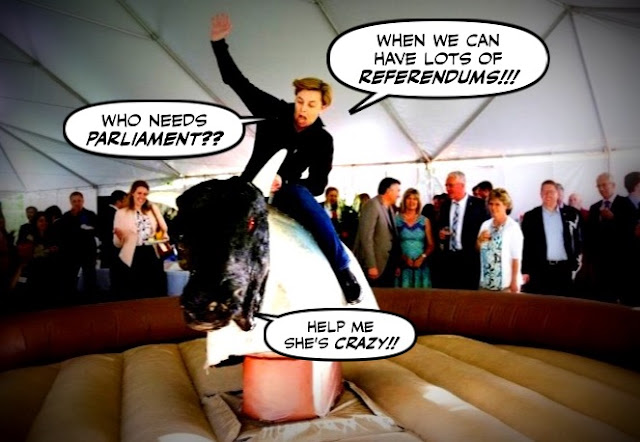 By installing permanent rule by referendum.

As Prime Minister, I will introduce the Let the People Speak Act which will bring in a system for citizen-initiated referendums. No longer will politicians and elites be able to ignore you. With the signatures of 3% of registered voters, Canadians will be able to hold a referendum to amend existing legislation or to require the introduction and debate of citizen-initiated legislation.

So needless to say I also find it hard to believe that Leitch is leading the Con leadership race, as mediocre as the other candidates may be.

But for that it seems there is an explanation.

Our hapless Con media helped make her Canada's would be Trump impersonator. 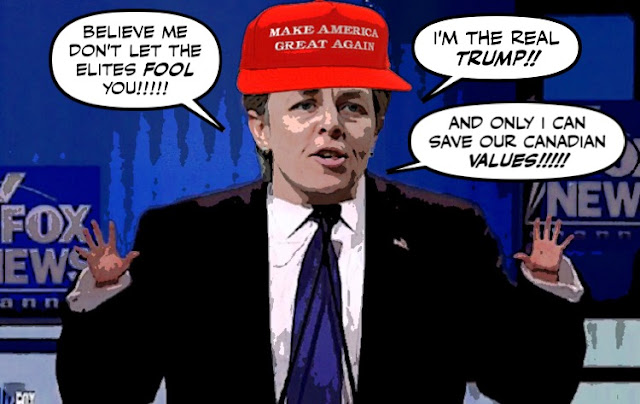 Although Leitch was the first to enter the race in April, she failed to gain traction and badly trailed other contenders in opinion polls.

Then, at the beginning of September, Leitch proposed screening immigrants and visitors for “anti-Canadian values.”

Leitch is now a front-runner in the leadership race, according to opinion polls — a development that occurred in as little as two weeks after her values screening proposal was introduced.

By giving her so much free publicity... 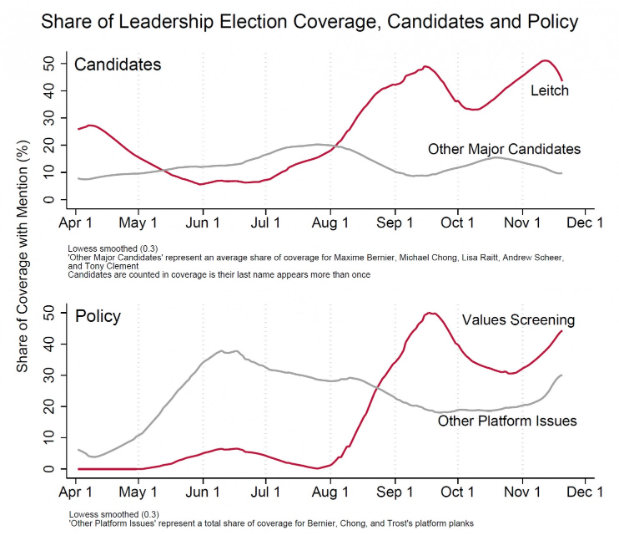 In the top panel you can see that Leitch got little coverage during the summer. But once she started talking about screening immigrants for “anti-Canadian values,” her average share of news coverage jumped from 13 percent to 47 percent.

And focusing so much on her xenophobic plan at the expense of all the other issues.

Even though it should be obvious that Leitch's campaign couldn't be more contrived. 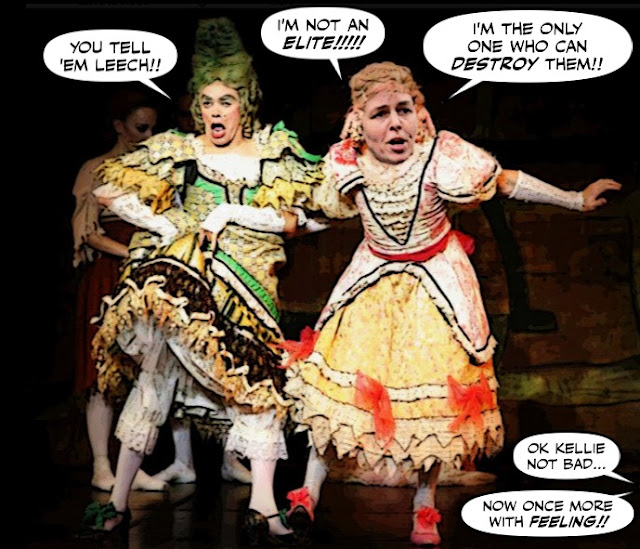 Even she probably doesn't believe what she is saying.

And more importantly, anti-immigrant sentiment is NOT a big problem in Canada.

And making it sound like it is only riles up the racists in this country... 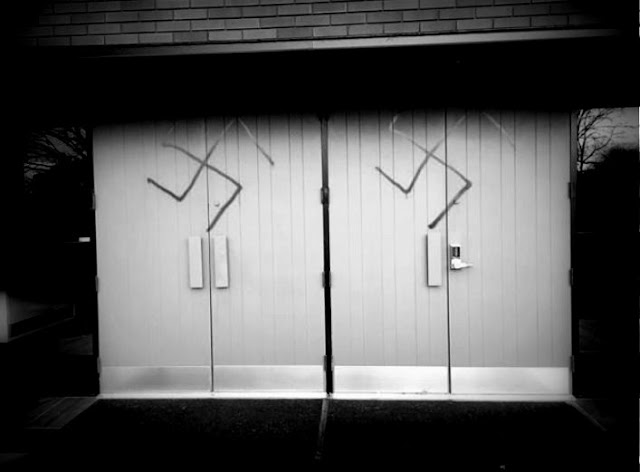 And encourages them to do nasty things.

The fact that a candidate like Leitch could be leading the Con leadership race tells you a lot about the race... 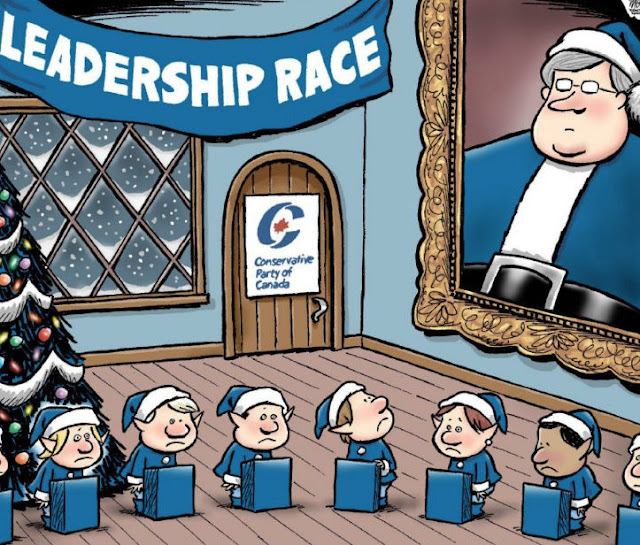 Canada really does work. We're an amazingly diverse country, but somehow despite our differences we've managed to avoid the problems other countries are going through.

And we all get along peacefully together.

And there can be no better example of that than this video of three guys in snowy Halifax, which although you may have seen it on TV.

I just HAD to run because it's so great...

And it is my Canada, where diversity is strength AND cool.

Kellie Leitch should take her ghastly anti-immigrant campaign somewhere else.

Start shovelling snow instead of manure.

And focus on being a better Canadian...

Thank you for last video, I needed this lift on Monday. Love our Canada. Kelly L. is just dead in the water.

Don't kid yourself Simon, it could happen here if the economy went to shit, which it will thanks to Dump.

hi TS...I'm glad you liked that video. I really have to run more stuff like that, to try to cheer people up. It is grim out there, but at least the Cons aren't going anywhere...

hi anon..I suppose anything is possible. But as I write this I'm looking at a big Canadian flag flapping in the breeze against a background of bright snow. So I'm hoping that our Canadian values will protect us from the demons loose in the world....

she did it because she is smart. she saw how well it worked for Trump so why not for her. She doesn't have much to loose, from her perspective. We may not like it. We may consider her actions disgusting, immoral, hateful, etc. But if it works for her, it works for her and in politics there is only one first. you either make it or you don't. All is fair in love and war. Politics is war.

hi e.a.f...I don't think Leitch is very smart, just very, very ambitious. I don't think what worked for Trump will work in Canada. We are more moderate as a people, and the question of race doesn't divide us like it divides the Americans. Leitch's strategy might just give her a narrow victory in the Con leadership race. But if she ever tried to peddle that garbage in a general election she would be soundly defeated...

Hi Anon @9:15 AM, I’m not so sure the Economy is going to implode because of Trumplethinskin as we call him around my place. His Cabinet choices are all predatory Neo-liberals and true to their nature they’re going to go for as much de-regulation as they can get away with. There’s almost always a flush of profit that ensues post de-regulation; that’s why Politicians are willing to de-regulate because that profit growth makes them look competent. However the problems come when not if self regulation fails and the cost is passed onto the taxpayer.
Historically when a Society can’t shoulder the debt burden of failed industry, Society itself fails usually resulting in revolution. That’s why when the Scots were developing Contemporary Capitalism in the 18th & early 19th C. they instated the principles of the Social Contract (REGULATION). The boom in de-regulating or as some called it the Free Market has been going on with Neo-Liberal Governments in modern times since Mulroney, Thatcher and Reagan and now the BoA has classified our three Countries as Plutocracies. So in reality we’re caught in a cycle that’s just gearing up for another spin at the economic plunder Roulette wheel & Trump just happens to be the front guy that’s doing the spinning. Sadly where it ends is going to result in a greater transfer of sovereign wealth to the 1%. Our liberal Government has demonstrated it’s been gearing up to capitalize on the feeding frenzy.

Sorry for the long winded reply but your comment echoed what’s been going on in my head since the US election and my pet economic subject, the little known or understood, “Social Contract” (Regulation) which in my opinion really clarifies the where, what and how of current economic and social woes that’s been developing over my lifetime. So perhaps if enough people can connect the dots, the “Social Contract” also becomes a remedy. We do have one political party who’s current leader spoke about this economic principle during the last election on a really informative interview hosted by our East Asian Community in Vancouver. I hope his Party keeps him on as Leader.

Cheers and Best Wishes to you and yours,
a jane fraser

Last but not least Season’s Greeting and many thanks for the gift of your blog Simon. Best Wishes to you, your loved ones and all who contribute to your blog with their comments.

Are there others who find Leech's voice both annoying and cloying?