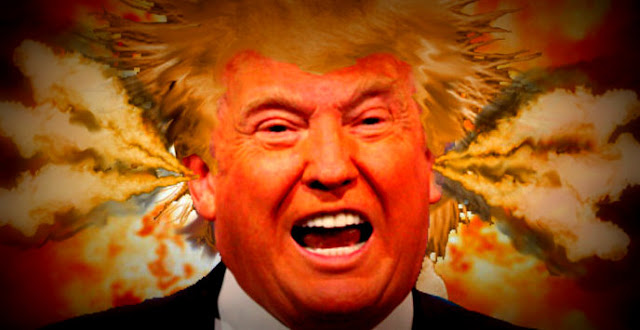 Of all the horrible things Donald Trump is threatening to do, and there are so many, his promise to end the war against climate change is the worst.

For there is no greater threat to the future of humanity, and his claim that climate change is a hoax is not just wrong, it's insane.

And if you want to know just how crazy he is, all you have to do is read his angry messages to the former First Minister of Scotland. 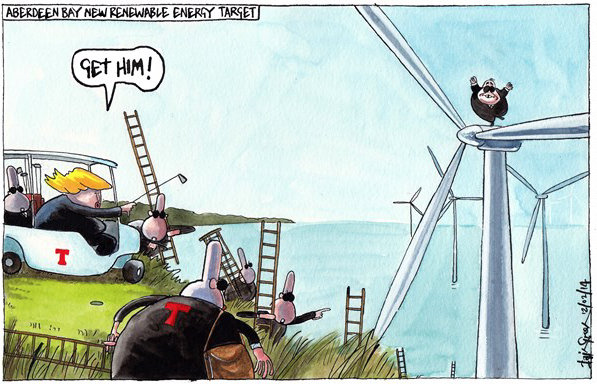 And his deranged war on wind turbines.

Donald Trump harangued the former first minister of Scotland as “Mad Alex” and accused him of being on a “march to oblivion” in a series of increasingly angry and eccentric letters about windfarms he claimed were blighting his Scottish golf courses.

Referring to windfarms as “monsters”, the series of letters suggests Salmond “let them ruin the coastline of Sweden first”, declaring that “wind power doesn’t work” and warning him that “your economy will become a third world wasteland that investors will avoid”.

For not only are those claims bizarre, this one is so ridiculous anyone even vaguely familiar with the bloody history of Scotland can only shake their heads or laugh.

The letters, dated from September 2011 to June 2013, show the billionaire fulminating at the consequences of windfarm development, as well as displaying a rather partial grasp of Scottish history: “The people of Scotland will forever suffer! With the reckless installation of these monsters, you will single-handedly have done more damage to Scotland than virtually any event in Scottish history!”

Or raise a large Mexican flag next to one of his golf courses on the Aberdeenshire coast... 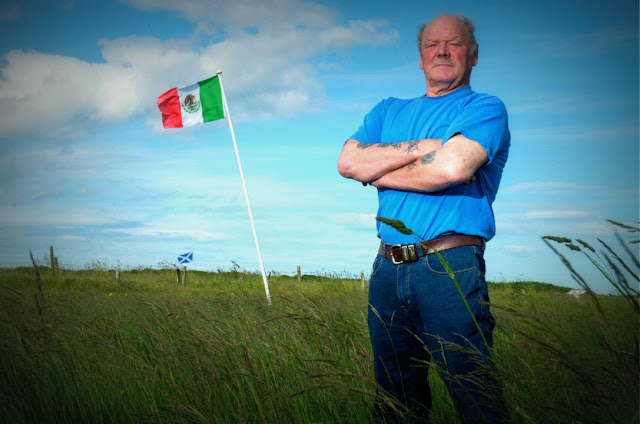 To show him what they think of him.

And as somebody who knows that coast like the back of my hand, I can solemnly declare that the only blight on the land are his hideous golf courses.

Which are ruining these dunes where I played as a boy... 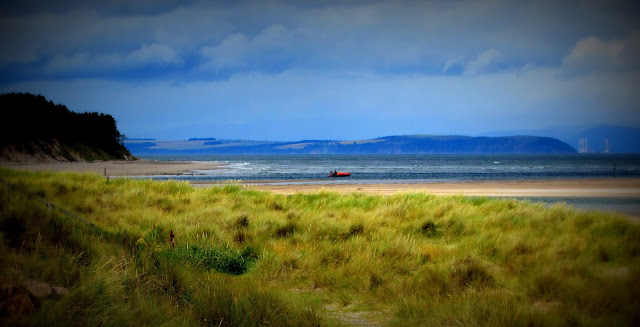 Most of the wind turbines Scotland has built, and is planning to build, are too far out to sea to be seen.

And Trump sounds as crazy as he sounded when on a recent visit to the country where his mother was born he famously declared this... 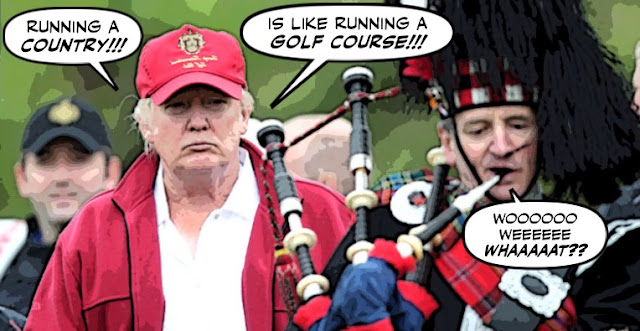 And while I would normally leave it at that, because the last thing I want to do is remind people that the orange oaf is half Scottish, this is too insane to be ignored.

In another epistle, this time addressed to Philip Hammond, Trump thanked the then defence secretary for “your ongoing objection to these horrendous machines that will ruin Scotland and compromise the United Kingdom’s air defence program”. He concluded: “The defence of the UK is far too important to tinker with just to satisfy Alex Salmond’s bloated ego.”

For anyone who thinks that wind turbines could compromise the UK's air defence program is unfit to run a golf course let alone a country.

But it does make me wonder whether Trump's deranged war on climate change stems from his war on those windfarms, because as we know he is a vindictive monster, and for him business always comes first.

He does seem obsessed with wind power... 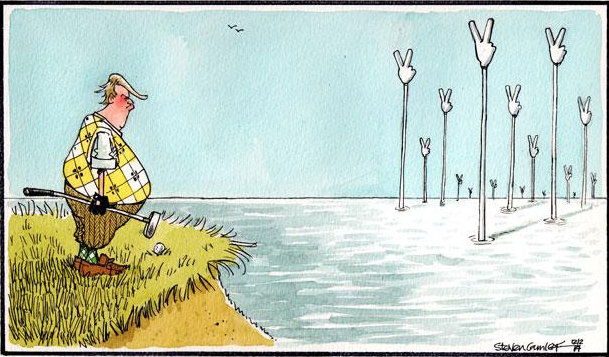 Scotland is making great progress towards powering itself with renewable resources.

Trump is persona non grata from the lowlands to the highlands... 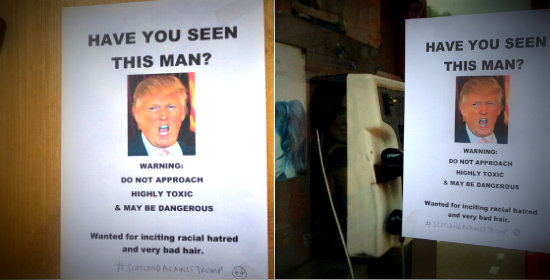 The curse of the planet.

And the shame of Scotland... 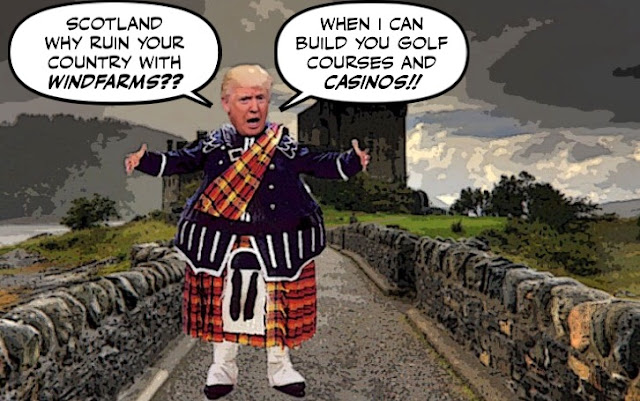 And of course, when you resist him, as we must, before he torches the planet.

Please feel free to use this old song as your inspiration...

Once upon a time, a small country stood up to a bully.

If it could defeat him, so can others.

Scotland forever and never ever Trump...

Wee Donnie isn't having much luck with his golf courses. The Scottish ones are loosing 10% a year. With any well run business expected to make a 10% profit, the failed hair experiment is loosing 20% a year. Only a poor business man pays over the odds for a money looser.

In Ireland, the orange Kanute wanted to build a sea wall to stop the sealevel rise from climate change that doesn't exist. Local surfer dudes kicked his ass. No wall for you.

Maybe he should go into the casino business where its impossible to loose money . Oh wait.

Thank You Simon. Im going to play that video over and over. My parents played this song so much, it sure brings back the memories now that they're both gone. Still have lots of Rels there. I hope to get back there someday for a visit. My Parents were from Glasgow. They immigrated here after choosing Canada over Australia. Growing up on the frozen prairie we kids often wished they'd chosen Australia but of course now couldn't be happier to be Canadian. ❤ Pamela. ( no need to print Simon )

yes fuck trump for awhile there are a lot off
shitty politics going on in this country you can report on.

"And while I would normally leave it at that, because the last thing I want to do is remind people that the orange oaf is half Scottish, this is too insane to be ignored."

Dear Simon,
By using Dijkstra's algorithm and the Fraser Institute's SAD algorithm (specious analogy discriminator), I have determined that you and DT have 2.71828 degrees of separation. My condolences.

Yours is one of my fav blogs.
Merry Christmas and the best to you in the new year.
Cheers
AR

Thanks for the link to Scotland the Brave. Great song and I am a sucker for the pipes. Heck, I once saw the Royal Hong Kong Constabulary Pipe Band at the Tattoo.

On a more serious note, we currently only have one real problem in the world, Climate Change.

Other issues are gnat bites. If we don't slow down climate change, minor things like wars, massacres, epidemics are of no real importance.

The NASA site http://climate.nasa.gov/news/ provides a good up to date over view on climate change as well as related subjects such as ground water reserves. Check it out before the Great Denier takes the site down. It remains to be seen if a few buffoons can propel the most technically advanced nation in the world into total darkness.
RT

hi rumleyfips...yes I'm glad to see that his golf course are doing badly, but Trump seems to think that he owes it to his dead mother to make sure the ones in Scotland are seen to be a success. So as I said in my post he really is a curse. He made a fool of himself right after Brexit by emerging from a helicopter and congratulating the Scots on throwing off the yoke of Europe, even though most of them voted to remain in the E.U.
So I think I can confidently predict that if he visits Scotland as President it will be a riot...

hi anon...I envy your capacity to sum up the situation so succinctly. And needless to say I share that sentiment...

hi Pamela...you're welcome. I wish I had been able to find a better video to go with the music, or made my own. But it is a great song, and when I watched the mass pipe bands at the Edinburgh Military Tattoo last summer play that song as they marched out of the castle courtyard I must admit it was quite something. As for Australia, some of my ancestors did go there. And although when I see pictures of those sunny beaches I feel a bit envious. I'm glad that I ended up here...

hi anon...well now that Parliament has recessed, and I've done so many stories on the Con leadership race, Trump is still the Big Story. The Canadian scene is a bit boring right now, and after what's happening in the U.S. I couldn't be more grateful...

hi AR...Thanks a lot. But is 2.71828 degrees of separation enough? I was going to get one of those ancestry.com kits to test my DNA. But Scotland is a small country, and if I found out I was related to Trump's mother's family, I'd probably have to kill myself to escape the everlasting shame. And of course should she be a Campbell or a MacDonald I'd have to summon my clan and declare total war...;)
And Merry Christmas and a Happy New Year to you and your loved ones!!

hi jrkrideau....I'm glad you liked the tape. As I told Pamela I wish the pictures had been better, and I should have made my own. But yes, climate change is our number one problem. And I can't believe what Trump is planning to do. Or for that matter come to terms with the fact that even though the election campaign seemed to last forever, the issue of climate change was all but ignored. It's simply stunning. But at least if the global warming situation continues to worsen, Trump will look bad, and it should be a big issue in the next election....

hi RT...yes, the idea of torching the planet and blinding us at the same time really is appalling. And is what Harper tried to do by muzzling scientists etc. However the good news is that a lot of Americans are revolting. And Jerry Brown the California governor is even threatening to send up his own satellites, if Trump tries to take those NASA satellites down...