Is Donald Trump Too Deranged To Be President? 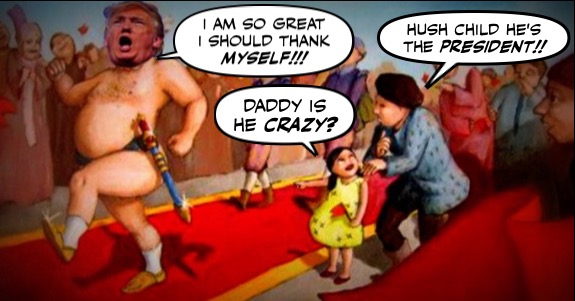 It's like a slow motion nightmare. Donald Trump is now just 23 days from being sworn in as president, and getting his hands on the nuclear codes.

And it seems that the pressure is getting to him. He's in a highly agitated state, his bizarre Christmas card to America was badly received, as I pointed out yesterday.

And his tweets just keep getting weirder and weirder...

But nobody seems to be asking whether, like the mad emperor who had no clothes, Trump is also is losing his marbles.

And is mentally unfit to be president. 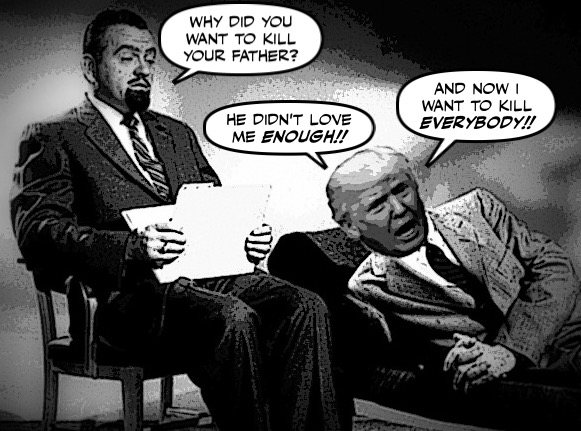 A couple of months ago the medical writer Gabor Maté put Trump on an imaginary couch and came up with this diagnosis.

The consensus as to Donald Trump’s psychiatric issues is nearly unanimous. “Textbook narcissistic personality disorder,” according to clinical psychologist Ben Michaelis, quoted in Vanity Fair. He is just one of many who have reached the same conclusion. Noting his motor mouth, chronic inability to pay attention and shockingly deficient impulse control, others diagnosed Trump as a severe case of Attention Deficit Hyperactivity Disorder.

But while back then before the election, Maté described that diagnosis as mere political sport, now it could very well be a matter of survival. For the reasons he himself describes.

What we perceive as the adult personality often reflects compensations a helpless child unwittingly adopted in order to survive. Such adaptations can become wired into the brain, persisting into adulthood. Underneath all psychiatric categories, Trump manifests childhood trauma.

According to biographers, Trump’s father was a workaholic, a ruthless, cold and authoritarian man who believed life is a competition where the “killers” win.

Donald’s elder brother drove himself into alcoholism, a common escape from pain, and to an early death. The younger, favoured child is now self-destructing on the world stage.

Trump was deeply traumatized by his father Fred, which has resulted in a compulsive need for love or adulation... 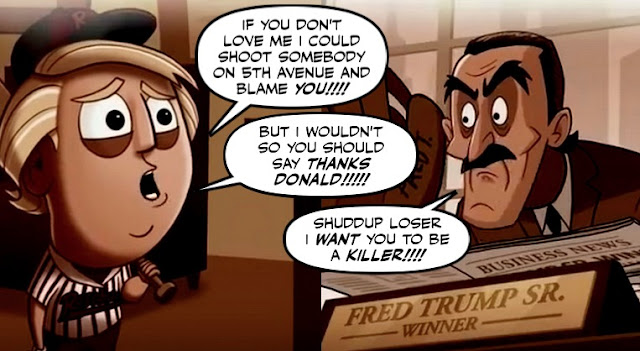 And if he doesn't get it, and the presidency isn't enough to quench that deep thirst, or proves too stressful, all these associated conditions could worsen:

Narcissistic obsession with the self compensates for a lack of nurturing care. Grandiosity covers a deeply negative sense of self-worth. Bullying hides an unconscious conviction of weakness. Lying becomes a mode of survival in a harsh environment. Misogyny is a son’s outwardly projected revenge on a mother who was unable to protect him.

Which could be really ugly, and dangerous. Especially with Trump's psychopathy traits ranked somewhere between Idi Amin and Adolf Hitler.

And some experts already warning that the Angry Orange's reckless tweeting could provoke the equally deranged leader of North Korea, and trigger a nuclear catastrophe. 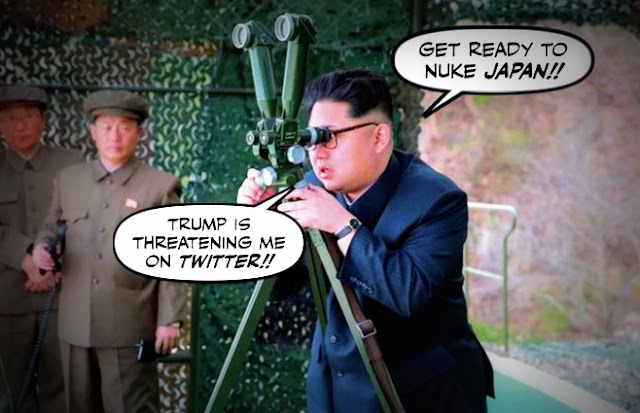 Jeffrey Lewis, a nuclear non-proliferation expert at the Middlebury Institute of International Studies, tells Sargent that Trump simply should not be given access to Twitter if the United States gets into an escalating crisis with a nuclear power such as North Korea, as that country could easily misinterpret his intentions and start lobbing missiles at American allies.

But what makes all of this even worse, if that's possible, is that by acting so erratically Trump is also gas lighting America.

To gas light is to psychologically manipulate a person to the point where they question their own sanity, and that’s precisely what Trump is doing to this country. He gained traction in the election by swearing off the lies of politicians, while constantly contradicting himself, often without bothering to conceal the conflicts within his own sound bites. He lied to us over and over again, then took all accusations of his falsehoods and spun them into evidence of bias.

At the hands of Trump, facts have become interchangeable with opinions, blinding us into arguing amongst ourselves, as our very reality is called into question.

Making it harder to distinguish between what's true and what's not, and what is just insanity. Like this latest tweet blaming Obama for all his problems...

Which in turn makes it harder to measure Trump's madness... 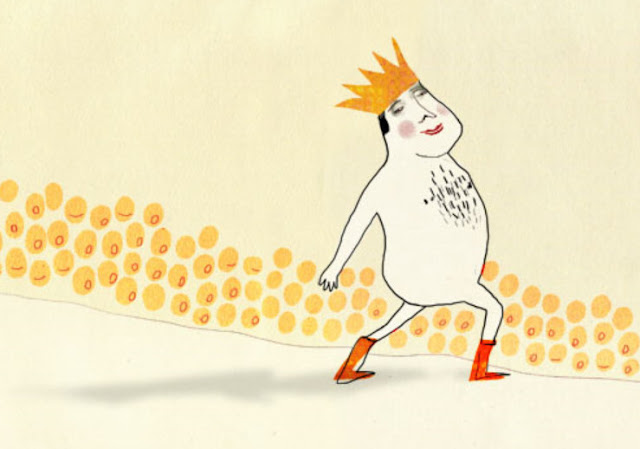 And even less likely that somebody in authority, or in the MSM, will dare to say the mad emperor has no clothes, and he's losing his marbles.

So I guess it will be up to all of us to drive that message home...

And hopefully help drive Trump over the deep end... 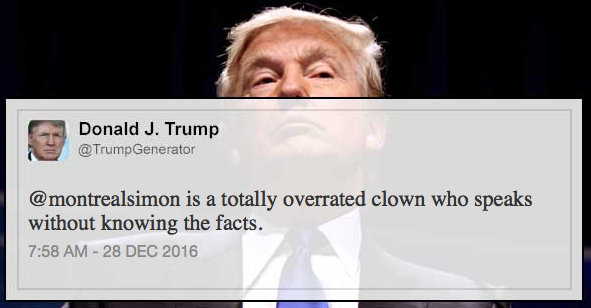 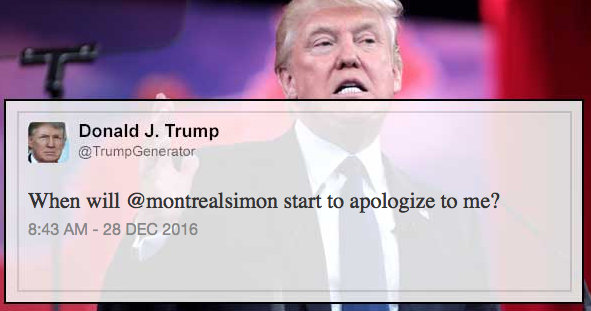 So there can be absolutely no doubt about it.

The man is too crazy to be president.

And sooner or later he will have to be removed by whatever means necessary. 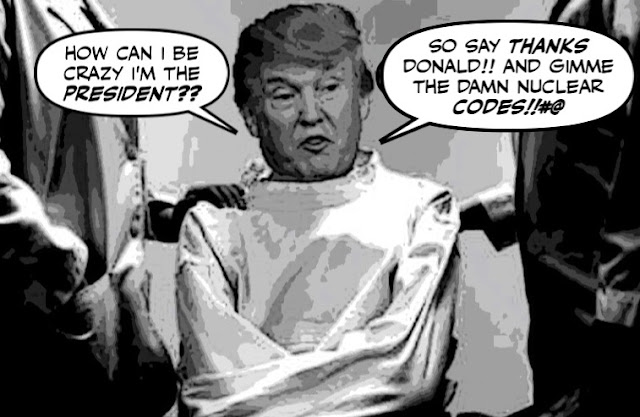 Is he too deranged to be President? Not really. The Americans supported any number of deranged people as leaders of their country. It was not a pretty picture. Now the americans have done it to themselves. How will this play out on the international stage? Most likely grown up world leaders will ignore him. the crazies will follow him. He will find a good friend in the president of the Philippines. Putin maybe come a good friend or not.

The true test of how he deals with rejection will be when they have the inauguration and not many show up, especially the "talent".

There is nothing which can be done at this point. he will be sworn in. Might as well watch the comedy shows who will have an endless parade of material. All over the world countries have risen and fallen and yet we have continued. Now the others didn't have nuclear bombs, but I'd suggest he won't use them. It might blow up some of his real estate. impact his profit margin.

"Is Donald Trump Too Deranged To Be President?" Definately.
Besides the ample evidence you've provided Simon, this moment https://www.youtube.com/watch?v=ySnADNuCI_Y clinched it for me. He is not stable and completely unfit to be president. Let's pray he's impeached before he starts WWIII.
JD

Everybody needs to watch Threads, the 1984 BBC movie about nuclear war and the consequences of it and join me in my anti-nuke crusade.

I love the way you can make a very serious point about Trump, and still be funny. Are you as playful in real life as you are on this blog? If so Seb is a lucky man indeed. Happy New Year Simon!!!

Hi e.a.f....I don't think Americans have ever had a President quite as deranged as Donald Trump. I believe his behaviour demonstrates a degree of mental instability which is frightening considering the military power he has at his disposal. And don't forget his national security adviser Mike Flynn is certifiably insane, and not the kind of person likely to calm down Trump. So I don't think anyone can predict where this clown show is going...

Hi anon...well of course I'm having fun with Trump, just like I had with Harper. I enjoy mocking our would be dictators. But I'm not ducking anything or anyone. The political scene in this country is relatively placid, and unlike you I think Justin Trudeau is doing a great job all things considered. The more he is compared to Trump the better he looks. And I promise to write a glowing review before the end of the year to hopefully ruin your New Year's Eve.... ;)

hi JD...thanks for the link to the video, and supporting my position. After e.a.f's comment I was starting to question my own sanity ;) But yes. let's hope he can be impeached before he starts WWIII....

hi anon...thanks for your reference to Threads. I must admit I had not heard about it, but it looks well worth watching. And I believe now would be a good time to remind people of the horror of nuclear war. Her's a link to the complete movie:

hi anon...Yup, Seb is definitely a lucky guy. I remind him about that on a daily basis, and he agrees. ;) And yes, I am a playful person in real life. I know of no other way to survive the sometimes grim times we live in. I believe in a better world, and the thought of that keeps me smiling and laughing. Happy New Year !!!

The question is: Is Trump too de.....? No he is not because he was elected and will be the president on 20 Jan., deranged or not. Ought he to be in the position? Not so much. On the other hand, he is going to be and those in his cabinet aren't exactly what one might refer to as leadership candidates for a democracy. For a thugocracy, yes.

The world has survived all sorts of things and people. the world will survive Trump also. who knows, he might not be in office all that long. He isn't that young and looks terribly over weight, regardless of those suits.

As Trump tries to institute some of his "plans" he may face violent opposition in the country. He may be too busy deal with riots, etc. to do anything else.

A Trump presidency is horrifying on every level. The most terrifying is that there are NO checks on the power of the Commander-In-Chief (in this case, the insane Donald Trump)to initiate a nuclear strike on any country which he so desires.

Alex Wellerstein, a historian of science at the Stevens Institute of Technology explains the protocol:

As to all those voters who thought Trump would make American great again, well they may live or die regretting their decisions.

As to Trump's actual mental stability, who knows and if they do they're not talking. He does seem to me that he might be bi polar with shades of being a sociopath and narcist. None of these might preclude some one from being President, but in the end I'd say the guy is just bat shit crazy and that does make him unfit to hold any public office. Alas the Americans voted him into office and we will just have to get over it. Its not like we can do anything about it and neither can any other country. The closeness of his family around him all the time, may in fact be simply a method of keeping him under control.

It was interesting to watch McCain express concerns regarding Russian hacking and Trump saying they ought to get over it. With an attitude like that Trump maybe in trouble with the senate in no time flat. if the senate thinks he is a danger to the country's security, they can remove him. That would leave Pence as President and I believe Paul Ryan as VP.