The Moral of the Ugly Christmas Tree 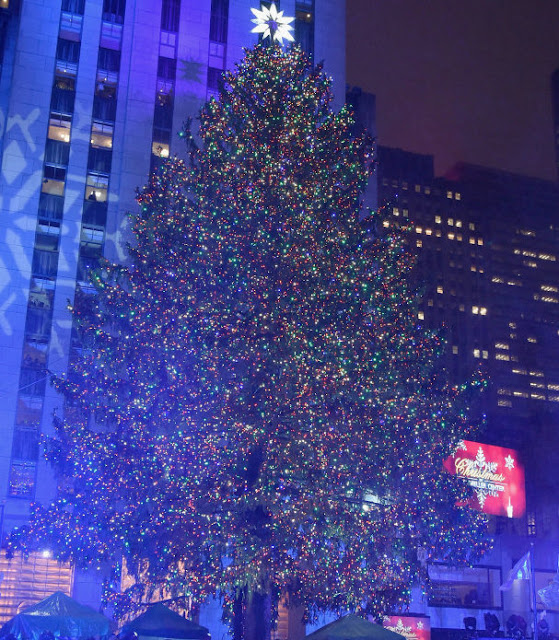 It's a classic Canadian story, or to be more precise, a story that could only happen in Canada eh?

A group of Montrealers set out to get a Christmas tree bigger than the one at New York City's Rockefeller Centre. The one in the picture above.

Only to end up with one considerable shorter, and...um...not quite as beautiful. 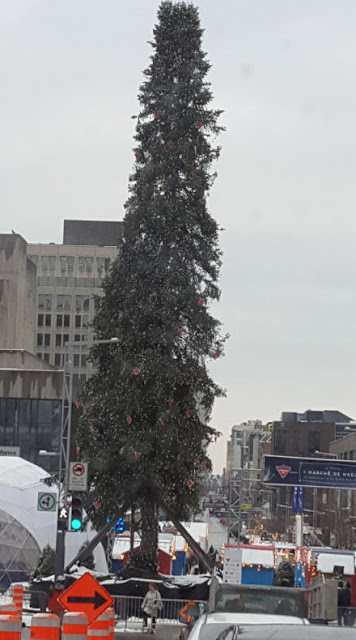 A Christmas tree that almost nobody loves.

“It’s horrible, it’s completely awful,” said Georges Malouin, who was passing through the open-air Christmas market where the tree is displayed. “I’m so surprised. I saw it on the internet but now, live, it looks very — cheap.”

“It’s quite sad, really,” said Michaela van den Berg, a visitor from England whose husband, Jos, compared the tree to a matchstick. “Maybe it’s a joke.”

Except those who put it up.

“It’s not perfect, but it’s authentic and it’s a real tree that you find in the forests of Quebec,” Mr. Pelletier said. “We’re not pretending this is the most amazing, beautiful tree in the world.”

And the tree itself...

Which points out quite correctly that beauty is in the eye, or the nose, of the beholder.

But now to make things even more embarrassing for us Montrealers, the artsy fartsy critics from Toronto are weighing in and questioning our artistic judgement !!

Stand well back, and you can see the slight curve in the tree’s upper third. Anyone who has spent time looking at forests in Canada would recognize that this fir probably stood on sloping ground, and that the curve was a natural corrective to that placement. Trees with much more pronounced curves often reach out over Canadian lakes and rivers, and no one calls them ugly.

The Group of Seven founded a school of Canadian painting on such trees, which stood on the land as God or natural selection made them.

Hitting us with the Group of Seven, against which there is no defence.

And pointing out that when it comes to the platonic ideal for Christmas trees, a recent one in Paris was even uglier...

Another giant expression of the Platonic ideal went up at Place Vendôme in Paris two years ago, in the form of Paul McCarthy’s inflatable sculpture, Tree. But that green monster also expressed the ideal form of a butt-plug sex toy. The uncouth resemblance led to Mr. McCarthy getting his face slapped at the unveiling by an unidentified Christmas reveller. The work was later vandalized.

But of course, the real problem was that we HAD the right tree.

Mr. Pelletier said the company had a more majestic, shapely tree in mind. It researched the typical height for recent Rockefeller Center trees — 74 to 76 feet — and found a 78-footer in Ontario that Mr. Pelletier described as “amazing.”

But its narrow height advantage vanished in early November when Rockefeller Center announced that its 2016 tree would be a 94-foot Norway spruce.

But in our determination to beat the Americans we ended up looking like idiots. And isn't that a familiar story?

And the moral of the story of the Ugly Christmas Tree.

When will we learn that we don't have to prove anything to the Americans? 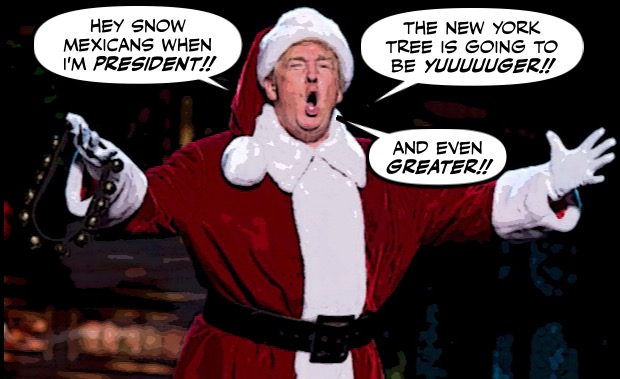 Not when that monstrous Santa is preparing to come down their chimneys.

We should just be grateful that at a time when the whole world is going crazy, we still live in a peaceful and relatively sane country.

And enjoy that humble blessing like this panda at the Toronto Zoo enjoyed its humble snowman...

Now isn't that cute? And where else can a panda play with a snowman?

Yup, I don't care what anybody says eh?

Canada never looked more beautiful than it does this holiday season. 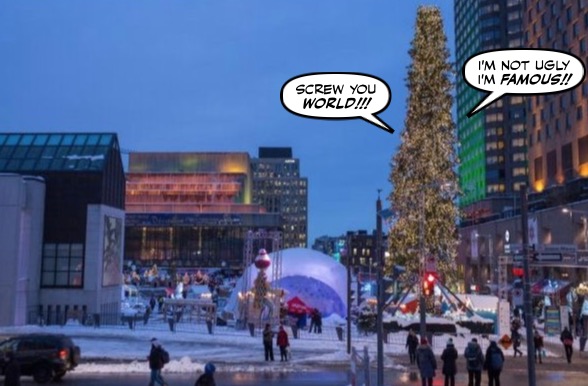 I'm grateful and thankful that at least we have Prime Minister Justin Trudeau and his majority Lib government insulating from the initial ripples of the Triumph of the (GOP/right wing/white supremacists) Will down south for at least the first few years of its life. This isn't meant as flip either, I am well and truly grateful and thankful for this. Imagine if you will a Trump Presidency and the GOP dominating both chambers of Congress and the Supreme Court having taken over in 2012 with Harper in the same position as Trudeau, and consider what we would have seen come out of THAT relationship.

Hopefully JT sees that while yes, we have to be polite to the crazy yet very powerful neighbour whose house blocks us off in the corner, that does not mean subservient nor toadying, especially when it comes to core cultural/social values. We may be forced to bended knee on some of the economic front thanks to the realities we are already tied into there, but the values of our society, the core principles we hold most dear in our social contract, those we must fight hardest of all for in this new reality, and hopefully JT can do this well. At the least he isn't going to wholesale sell us out in that aspect, unlike his predecessor in the Office.

I like the tree. It has personality. For me, that's what's important.

A Merry Christmas to you and yours, and thanks for another year of wonderful posts on your blog.

That poor tree gave its life (not that it had a choice) to bring joy at Christmas time and doesn't deserve the petty comments its getting. Just as the song that said "everything is beautiful, in its own way", so is this tree.
JD

Thats not an ugly tree! It has the more slender northern habit evolved for heavy snow. What is it a black spruce?

I love those trees. It looks like they had the space and could have gone with a tree with a wider base and more pyramidal shape but these trees are perfect for planting where space is restrictive. Its 80 feet tall and the canopy is only 12 feet wide just above our heads.

hi Scotian...I often think of what might have happened if we had Trump and Harper ruling North America, and I am grateful that in Justin Trudeau we have the anti-Trump. He is born to play that role, and hopefully he will inspire others all over the world. For now that Merkel is under fire after that Christmas market attack he is the only one standing up for our values. The year ahead will be a grim one, but I'm pretty sure he's up to the challenge. Merry Christmas and Happy New Year...

hi anon... thank you and Merry Christmas to you and yours. I'm glad you feel that way about the tree because I do too. I always side with the bullied but who knew I would feel that way about a tree? Like all of us it's not perfect, but it's still beautiful anyway...

hi JD...I agree with every word you say. No tree is ugly, and one that was killed to light up our lives deserves to be celebrated not mocked. Happy holidays my friend...

hi anon...that's the spirit. It is a truly Canadian tree, it didn't get dressed up with fake branches like the one in New York, but it has its own personality, and I think it's great....

Merry Christmas and a Happy New Year to you as well, even if this time the new year is the dawn of the Trump Presidency. Seriously, if it weren't for the impacts on global security and economic stability I'd be a little less freaked out, but unlike some people I've always understood that the stability of our world/societies is not frozen in place like cement, but rather the result of dynamic tensions which can with the wrong pressures in the wrong places start to change very rapidly in very ugly and/or unexpected ways. The election of Trump with a GOP Congress full of their own crazies (that Freedom caucus in the House within the GOP is certifiable, and they alas are not alone in this, nor has the Senate proven much better given the actions of some, including the Majority Leader in preventing the outing of Russia as trying to influence the elections for one side despite the classified intelligence he was shown proving such) is quite clearly capable of massive destabilization to such a dynamic balance, and once those types of balances are disrupted it can be very hard to impossible to recreate.

I do not think enough people appreciate the reality of, well, reality. Things are not certain where humans are concerned beyond death and taxes, especially in how we live together and how we govern ourselves. This can be as true for those of us in the first world at the top of the food chain of human society (which anyone reading/commenting here clearly fits, myself of course included) as anyone at the absolute bottom, the forces which may be governing our live may be expressing differently, but that we are all at their mercy, not so much. I fear we are moving into some very uncertain times thanks to the rise of Trumpism, and the legitimization of the alt-right aka new White is Right movement.

I wish nothing but the best for you and yours, even as I fear the worst for us all.