The scariest thing about Donald Trump's government by Twitter is the way his mind wanders, from the important to the trivial. Or from one button to another.

One moment he's pressuring Obama to veto an anti-settlement resolution at the United Nations.

And then out of the blue he raises the spectre of nuclear war. 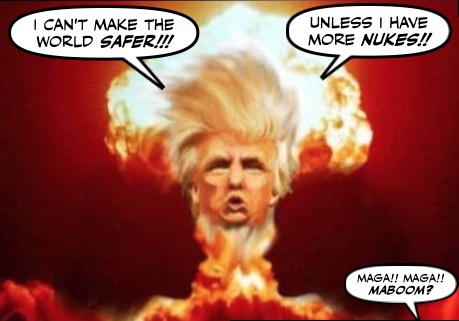 By claiming that the U.S. needs to strengthen it's nuclear arsenal.

President-elect Donald J. Trump said on Thursday that the United States should greatly “expand its nuclear capability,” appearing to suggest an end to decades of efforts by presidents of both parties to reduce the role of nuclear weapons in American defenses and strategy.

Leaving us to wonder whether Trump and Vladimir Putin are still on the same wavelength.

Mr. Trump’s statement, in a midafternoon Twitter post, may have been a response to President Vladimir V. Putin of Russia, who in a speech to his military’s leadership in Moscow earlier on Thursday vowed to strengthen Russia’s nuclear missiles.

Or whether Trump is now paranoid about the Russians, and Putin has finally realized that he has made a terrible mistake... 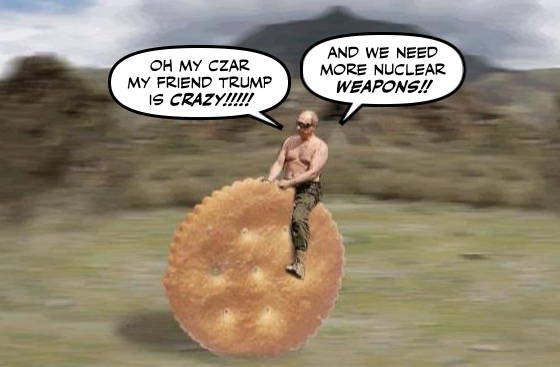 Finally realized that Trump's obsession with nuclear weapons might be dangerous.

As the Daisy Girl warned us during the election campaign..

But what I find almost as disturbing as another nuclear arms race, or the Third World War, is that in the midst of all of this Trump seems most obsessed with his failure to attract A-list celebrities to his inauguration balls.

Because that's insane, and this is pathetic.

The All American Ball for instance, which will happen at the Hyatt Regency, came out this week with a “stellar list” featuring Nashville singer Beau Davidson, an ’80s cover band named The Reagan Years who only play songs from their favorite president’s two terms in office, a wedding band, and an artist called “DJ Freedom.”

President-elect Donald Trump’s team is struggling so hard to book A-list performers for his inaugural festivities that it offered ambassadorships to at least two talent bookers if they could deliver marquee names, the bookers told TheWrap.

And getting his rich friends to force the poor Radio City Rockettes to perform for him is simply appalling.

The Radio City Rockettes dancers are pushing back after being told they must perform at Donald Trump’s inauguration, TheWrap has learned.

The announcement by parent company Madison Square Garden Company boss James Dolan on Thursday quickly spread through social media and sparked outrage among some Rockettes and members of the Broadway community.

But it does tell us something about the divided States of America Trump is about to inherit. And the kind of resistance he can expect.

And if the Rockettes do perform at the inauguration, they should definitely do this number...

For nothing could better represent where Trump's America is going.

Except of course for Ted Nugent, who is said to be ready and willing to perform... 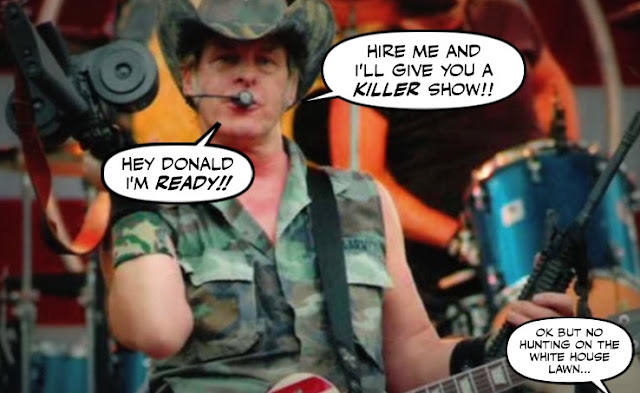 But only if he can bring his weapons to the party.

And yes, spare a thought for America and how low it has fallen.

Or better still, if you're religious, please pray for us all...

I hear the Mormon Tabernacle Choir will also be there, but like the Rockettes, they're another group that's not in a position to say no when the boss says go.

That army surplus gear's an interesting wardrobe choice for Ted Nugent, a man who literally shit himself to avoid the draft for 'Nam. Seems only appropriate that he'd play at the inauguration of a guy who got four medical deferments to get out of 'Nam. The same guy who got his doctor to right a letter saying he hasn't had a significant medical problem in 39 years!

- I'd make an incredible army man. I'd be a colonel before you knew what hit you, and I'd have the baddest bunch of motherfuckin' killers you'd ever seen in my platoon.

- There's nobody bigger or better at the military than I am.

hi David...thanks for that link. I had forgotten what Trump had said about whether Obama would have attended Scalia's funeral if it had been held in a mosque. What a revolting truly classless man he is, and it will motivate me to attack him as hard as I can....

hi anon...I didn't know that Ted Nugent had tried so hard to avoid getting sent to Vietnam. That makes his act for me even more disgusting. But I suppose that I shouldn't be surprised. In my experience people who talk like he does make good drill instructors, but lousy fighting soldiers...