The Con Debate, Kellie Leitch, and the Angry Pajamas 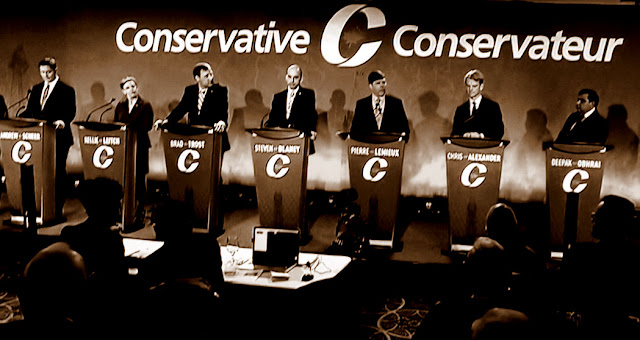 There were so many candidates at last night's Con leadership debate I couldn't fit them all into the picture.

Or shake the image of a bunch of crows lined up on a humming power line.

But although most of the debate was so boring I had to remember to keep breathing, near the end the feathers or the sparks started flying.

It took a while to get interesting, but sparks eventually flew in the second official Conservative leadership debate in Moncton Tuesday evening: there were accusations of race-baiting and Trump-aping, an indictment of the media elite, a lot of bad French and even a promise to eliminate the corporate income tax altogether.

And sadly for the Cons, some crows were louder than others. 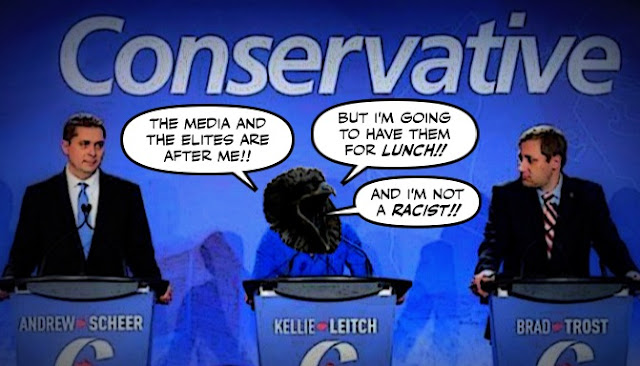 Because there was the deathly Kellie Leitch, claiming that she's not race-baiting.

“The discussion of Canadian values and screening with face-to-face interviews for immigrants is not racist, or xenophobic or anti-immigrant. In fact, two-thirds of Canadians want to have this discussion. Every country in the world is having this discussion,” she said.

Suggesting that because other countries are having problems with immigration we should make it our problem. While also claiming that the "elites" and the big bad media are out to get her.

Just because the media and the elites don’t want to have this discussion, doesn’t mean we should be afraid of it. Many of my colleagues on this stage, I know, are intimidated by the media. But I’m going to continue to talk about this because this is common sense.”

Which couldn't be more absurd, or more paranoid, or more contrived.

As you could clearly see when Heather Mallick accused Leitch the other day of getting everything wrong, and pandering to bigots or Angry Pajamas 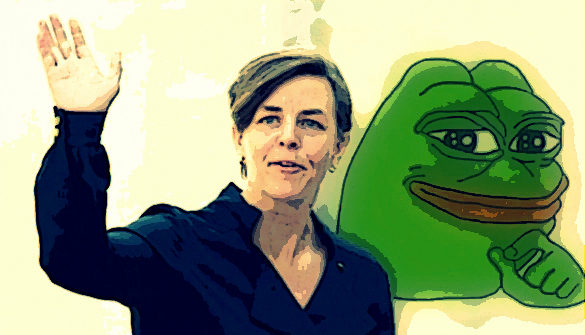 Leitch is one of those people who always gets the tone a bit off and the timing slightly wrong. Despite my need to admire anyone who is a pediatric orthopedic surgeon — those poor kidlets — I am gobsmacked by the ugliness of her campaign for the Conservative leadership.

Her base is Angry Pajamas, who are mad at the world for their own failures, and online commenters, who hate each other on principle. It worked for Trump but Canadians don’t lash out when they vote. They purse their lips.

And ridiculed her claims about fighting the "elites."

Only to have Leitch come flying out like a bat crow out of hell, trying to use what Mallick said to raise money:


And join the Angry Pajama brigade herself... 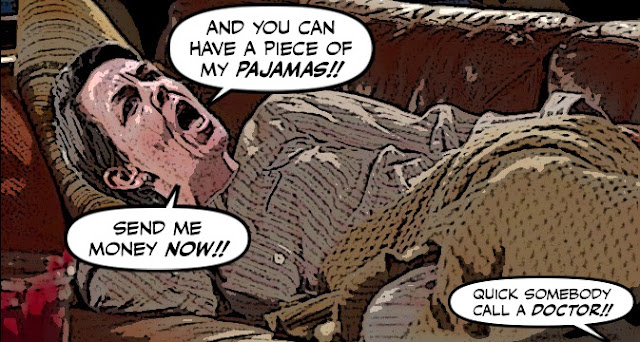 But of course it's not funny. It's pathetic, dumb, and dangerous.

Because in these bigot times, the last thing any Canadian politician should be trying to do is stir up the Angry Pajamas, or the Crazy Brigade. 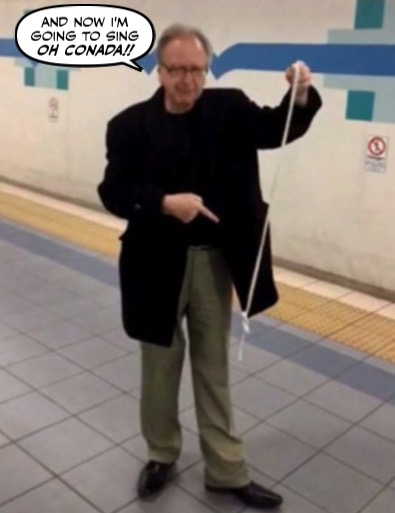 There's already too many of them out there.

Which is why I thought that the sinister Steve Blaney, who is also playing the anti-Muslim card, summed up the sad state of his party better than any of the others did last night.

Except of course the ghastly Leitch.

By holding up what appeared to be a fuel rod from a nuclear reactor... 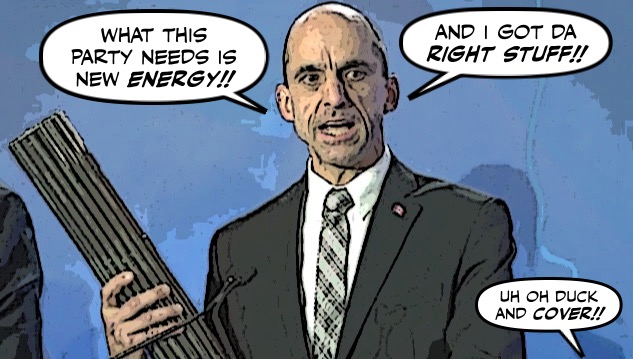 Because for once Blaney was right.

The Cons are radioactive.

We need her kind of dog whistle politics like we need another Trump, or a hole in the head, or a nuclear accident.

And we really won't be safe until we can destroy those Con Trumplings once and for all. 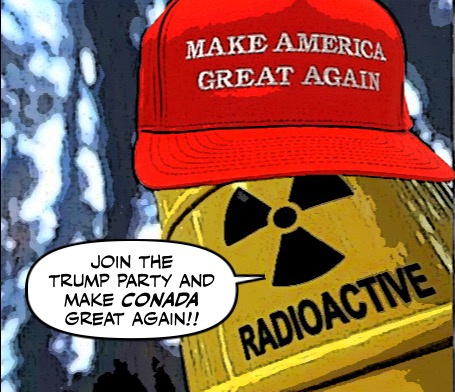 Before those Angry Pajamas do something crazy.

And the Cons poison our country...

That was painful to watch, and 10 minutes was all I could stomach. I think buzzards on a power line would be a better analogy of them Simon. Crows are quite intelligent and I'd hate anyone to think there was intelligence on display last night.
Triple K Kellie still trying to convince us(and herself) that she's not a racist seems to be the norm whenever she's on camera these days.
The highlight though was the show and tell with Steve Blaney. Were those actual spent fuel rods? It would explain the hair loss.
All in all, if they do to the country what they did to the French language then we are in big trouble.
JD

What a shit show. What more can one say, really?

MC: Tell me, do your hooded robes interfere with your vision while posting on the internet?

I agree MC, you are sick.
JD

Hardy har har. People said the same thing to me when I started supporting Trump well over a year ago. Look how that turned out.

By the way, CBC is anti-white propaganda. Their 22 minutes skit "Beige Power" last week was disgusting. I have lodged a complaint with the CBSC.

Boo hoo. This Week Has 22 Minutes is a show about satire. It's also part of free speech. Don't like it? Don't tune in.

So you love Trump do you? Here's a question; Will you be able to survive the oncoming economic collapse that will result from his presidency? I know I will and I suspect you won't because Trump supporters aren't all that smart and seem to be the least capable of personal responsibility.

You and MC can commiserate and share faux wars stories at your next cross burning.

OMG, filing a complaint over a comedy skit. please get over yourself and turn off the t.v. if you don't like what is on it.

It is unfortunate the Cons aren't fielding a good group of candidates. The party represents 100 ridings and those voters deserve to be represented well. Currently the Conservative party of Canada is the official opposition. Official Oppositions are vital to a strong democracy.

Currently most Canadians are "happy" with Trudeau and the federal Liberals, but as many of have seen, things can change and without a strong opposition things can turn.

Not being a Conservative, on one level it doesn't matter to me the party turns out. As a Canadian and firm believer in a vibrant democracy, I consider it important to have at least 3 health and competitive political parties in Canada. let us hope the Cons get it together so they can remain competitive. Given the current lot, I'd prefer Michael Cong.

Turkey Buzzards are a much more appropriate name. Unlike crows they have a 6th sense in their ability to ferret out the weak (including newborns),sick and dying and are quite willing to assist the outcome.I won't be too graphic but suffice to say they have no compassion. Sunny days can quickly turn when society looks into the sky and sees a flock of buzzards circling.
RT

What Snow Mexicans really want is to bang on the drum all day with our rainbow of friends.

They can't field a good group of candidates because their base is so fractured. The extremists who frequent the Rebel website are in a tizzy since the media picked up on the Edmonton rally and the "Lock her up" chants and their conservative leadership hopefuls disavowed them and called them "idiots". Kenney, Alexander, Ambrose, Jean have all put themselves in the bad books as our deplorables now turn to the worst of the bunch, people like Leitch, Trost and Fildebrandt, to support. And Levant hasn't helped, it's been constant spin since he exposed to the country who is readers truly are. Up the paranoia, up the media conspiracies and throw in Suzuki for some reason because that always gets them frothing. Levant is truly a maestro although leading lemmings isn't that hard.

hi JD...yes buzzards would be better. I went with crows because I was intending to use an image from Hitchcock's The Birds. But I had to give up because there were eight too many crows or too many Con candidates. ;) And yes, the debate was appalling. Between Leitch's Donald Duck voice, and the ghastly sound of French being mangled, it was almost impossible to watch. But of course that's good, because it should be clear to everyone that those losers aren't going anywhere...

hi Way Way Up....you should be a theatre critic for summarizing it so succinctly... ;)

hi MC...what are you saying? Now you're accusing the CBC of anti-white propaganda? Please think about what you're saying and how it makes you sound like a racist. But please vote for Kellie Leitch, because if she wins, the "globalist puppet" Trudeau will rule us forever...