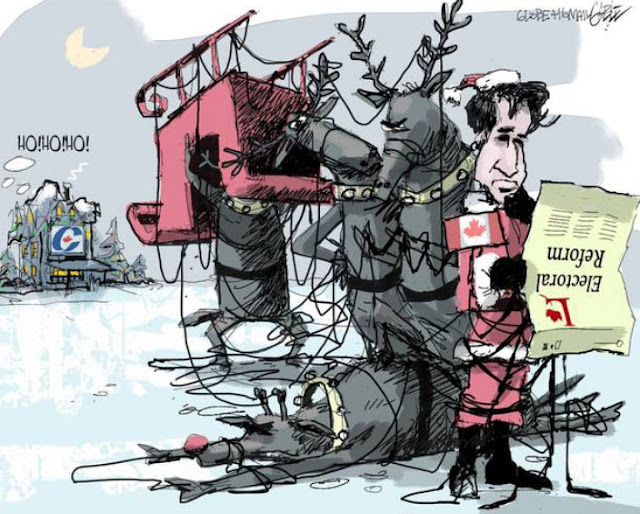 Ever since Justin Trudeau was sworn in as Prime Minister, the Con media has been declaring that his political honeymoon is over.

And in recent weeks with the confusion over electoral reform, and the controversial pipeline decision, that clamour has become almost deafening.

With one story after the other declaring that his golden ride was finally over.

But sadly for the Con media it seems they couldn't be more wrong. 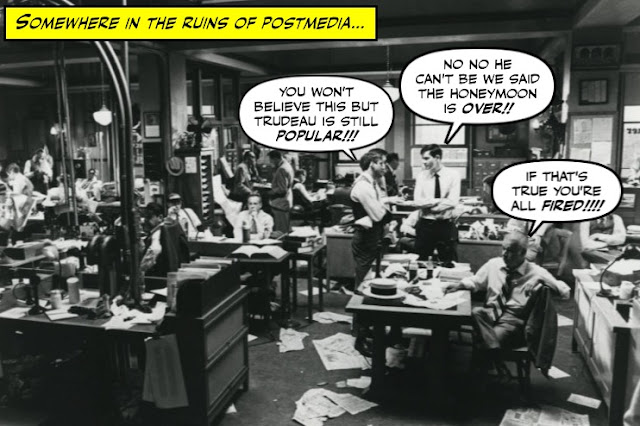 For according to the latest polls, the honeymoon continues.

Justin Trudeau's Liberals continue to enjoy more support today than they did in the 2015 federal election and have yet to see their poll numbers take a negative turn.

Over the last quarter, the Liberals have averaged 47.9 per cent support in national polls, a marginal gain over the previous quarter but up 8.4 points compared to election night. The Conservatives have averaged 28.7 per cent, down 3.2 points from the election, while the New Democrats have slipped 7.1 points to just 12.6 per cent support nationwide.

And as another poll suggests, Justin Trudeau is by a massive margin, still the preferred prime minister.

And his support is not falling, after a small dip it's soaring again... 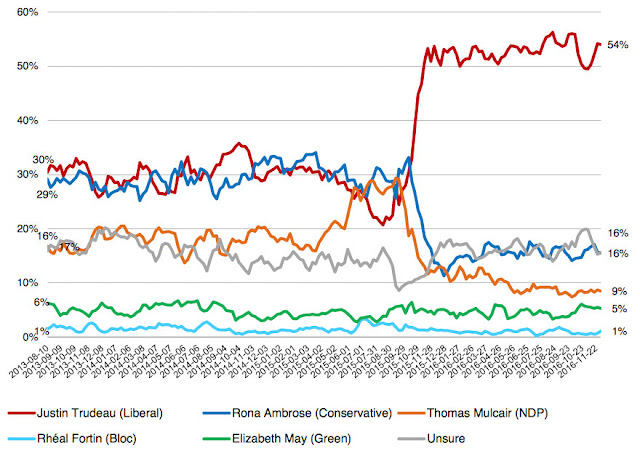 Which tells me that the Con media may be trying to please their corporate masters, but they have lost touch with the views of Canadians.

For the inconvenient truth is that most Canadians support Trudeau's attempt to fight climate change while at the same time trying to grow the economy.

Maybe they shouldn't, but they do. They like to have their cake and eat it.

And as for electoral reform, the equally inconvenient truth is that while Canadians say they favour a fairer system and the idea of a referendum, for most it's just not a big priority.

Fully two-thirds (66%) say changing the way the country votes is a “low priority,” though it should be noted that this doesn’t necessarily mean they think changing the system is a bad idea. Rather, it can be seen as an indication of a lack of strong feelings about the issue.

And when it's explained to them that a referendum would almost certainly maintain the present system, I'm sure even more will feel that way.

But most importantly what the Con media, and some of those who exist in the bubble or echo chamber of our social media don't seem to understand, is that the main reason Trudeau and the Liberals are still so popular is because Canadians still believe they best reflect this country's fundamental values.

They believed that a year ago, and today with xenophobia running wild all over the world and some Cons trying to turn Canada into another Trumpland... 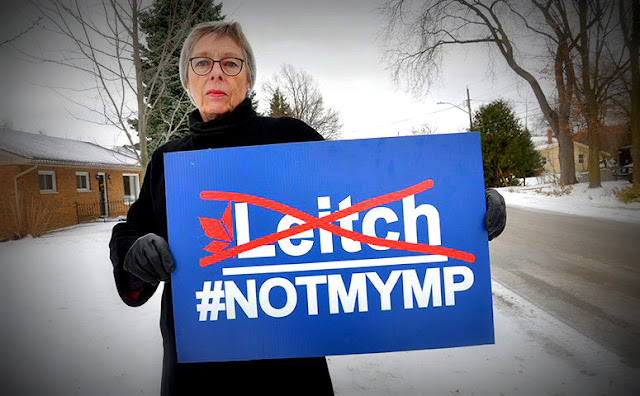 And this story about a trip to Ottawa by a group of young Syrian refugees couldn't be more explanatory or more moving in that regard...

For after the nightmare of the Harper years those are the kind of values most Canadians share.

Values are important, they define a country more than anything else.

And this is the kind of prime minister most Canadians still want and admire... 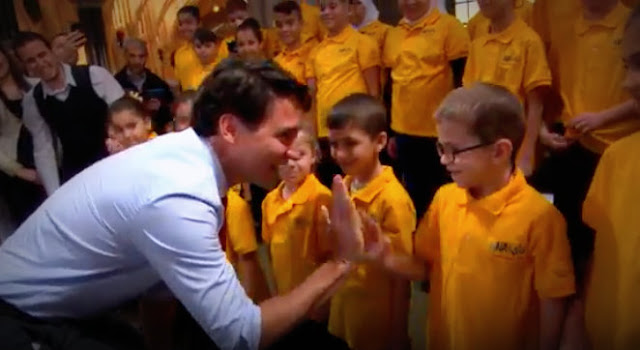 Oh dear, I fear the Cons and the Con media and the usual bunch of old Trudeau haters are going to blow a gasket.

But until the Cons stop destroying themselves, and the NDP can come up with a leader who can inspire Canadians more than Justin Trudeau can.

Which at this point seems doubtful.

I actually watched the debate from Moncton and wonder if these people are actually awake!

hi anon...only if you get a hospital bed. Also could you moan a little louder?It must be such a bitter disappointment, and I love the sound of Cons screaming in the morning....

Try as they might, the Cons and their media have failed to put a dent in JT's armour. I dont know if it's their petulance or their inability to shake the Harper taint that's ingrained in their DNA. For so long they were simple seals clapping to their Dear Leader's every word, careful not to think outside the Harper box for that would be met with disdain and punishment.
Their recent debate is abundant proof that these lost Harper souls are "just not ready". The way they're going, It'll take at least a generation to remove the odious stench of Harperism for they cant seem to, or want to call a spade a spade and move on. It's unfortunate because the wreckage of the Harper years has left us without a viable opposition and let's face it, the better the opposition is means the better the government will have to be.
JD

The Conservative Party really is lost in the wilderness, aren't they? The irony is that Kellie Leitch is really blazing the trail in the only direction the Conservative Party can sensibly move. After all, it's no longer the Progressive Conservative Party of Joe Clark any longer, it's now a rebranded Reform Party where erstwhile Red Tories go to shred what's left of their dignity. They can't upset their base by criticizing the Liberals from the left, and they can't govern worth a damn so it's not like they can point to any legislative accomplishments they had in 9 years of power, so what else does that leave beyond unctuous right-wing "populism" and stoking xenophobia?

After all, it's what their base wants, right? Resentment politics with a healthy dose of know-nothingism and a light sprinkling of phony blue-collar concern is "hip" now. They can't run on their actual agenda of course, because they'd be quickly cast out as the bought-and-paid-for extremists we all know they are. Meanwhile, JT just keeps on keepin' on, being a decent guy and a decent role model for all of us.

If I wished one thing, it'd be a more robust NDP, one that stuck to its social democratic guns instead of playing grab-ass with right-wing policy positions like Mulcair and Horvath did. Even if they never form a government, they need to force that Overton window back to the left. Although I suppose until their Leadership Convention, they're out in the wilderness too.

@anon 9:58 do you care to answer any of the facts Simon cites in his post? Or like a typical con are you only capable of making disgusting remarks?

Anon could be a Dipper they've been hoping those fake scandals would hurt Trudeau and help revive their deadbeat party. Simon shouldn't forget the dirty games the NDP is playing!!!

Hey Simon... thanks again for a great post... love the video.... so glad to live in our great welcoming country and to have an inspirational leader...

I haven't heard of any scandals, fake or otherwise. What has the NDP been doing? Have they been pointing out something scandalous?

Have agree with you, Anon 2:13. The NDP needs to stick to its roots. They are an outgrowth the old CCF that nipped at the heels of the Libs who finally saw the wisdom in creating a National Health Care Plan and the Canada Pension Plan. These are two benefits NO Conservative government (especially the Reform) would never have implemented, and our newer voters should understand that. I liked Jack Layton, but he was originally a Liberal and he took the NDP further to the right thinking he could nudge them out of Ottawa and replace them. Not a good move. The one thing about the Libs that the Cons could never do, is that they realized the value of implementing CCF/NDP ideas and still hang on to their corporate backers. The Cons never understand this concept, which is why we are always better off as a population with Libs than PC - but especially this ReformaCon incarnation of the old staid but still human PCs

I voted Liberal in the last election but am not a Liberal ideologue. Simon needs to be critical of the Liberals when they mess up. That recent survey is a joke! I predict the next national survey will show a drop in Liberal support, but not enough to concern party brass.

Apologies for the late entry, but I work long hours and don't get to a computer so much. BUT ...

"And in recent weeks with the confusion over electoral reform, and the controversial pipeline decision, that clamour has become almost deafening."

What's with the weasel-words Simon? It isn't "confusion" about electoral reform. At least on the Liberals' part. They're not confused. They're trying to create confusion. It seems that now they have a majority they've deluded themselves into thinking FPTP isn't so bad. Forgetting how they and the non-ignorant and/or non-stupid parts of the country suffered under the harpercons.

He's actually made noises about Canada having its own Standing Rock-style assault on First Nations' rights if they try to impede his pipelines.

I understand you're relieved that the simpering, sickening, cowardly bully harper is gone. I understand that the Liberals make nice noises now and again. But don't lose the ability to call bullshit when you see it.

Don't Trust the Liberals or the Conservatives they will always betray you when they get what they want. Tommy Douglas was right about Canadian Politics. It is Mice voting for Cats. This what we get!
-a Socialist know as Rae