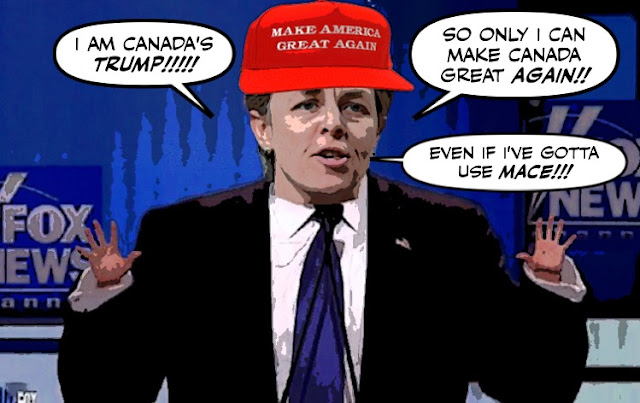 It's always been a bizarre cabaret act, a real freak show.

Kellie Leitch's squeaky voiced imitation of Donald Trump, and her xenophobic campaign to make us believe that only she can defend our Canadian values.

Even as she disgraces them.

But now that ghastly drag show is becoming even weirder, with Leitch claiming that the "liberal elites" are calling her supporters deplorables. 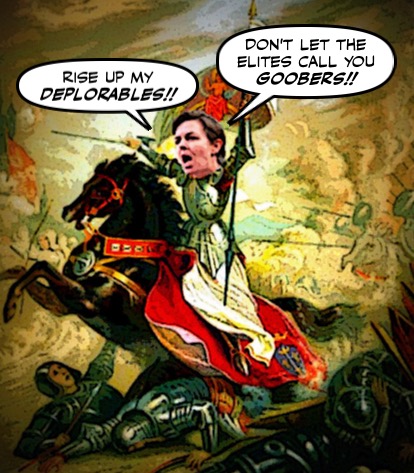 The Liberal elites are also against us. Do you remember when prominent Liberal @bigcitylib referred to Kellie's supporters as "goobers" and "slack jawed yokels from the the foothills of Ignoramestan"?

And urging her faithful followers and other bigots to storm the comment sections.

It's time for the Revenge of the Comment Section.

Stand with Kellie today to make sure those out-of-touch-elites can no longer ignore you.

Which no doubt has some of her supporters in Leitch Country scratching their heads... 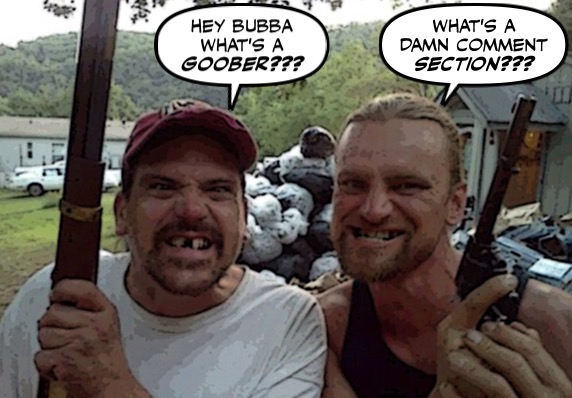 But has me howling with laughter, and wondering whether Leitch has finally gone over the deep end?

Cracking up, or losing her marbles, like she lost her domain.

When one goes to Kellie Leitch's anti-CBC petition page but uses .ca instead of .com, as most Canadians would, they go to a page that looks identical to Leitch's. But then the magic happens, a red X flashes over the screen twice, the "I have no idea what I'm doing" dog appears and you are redirected to CBC's website. 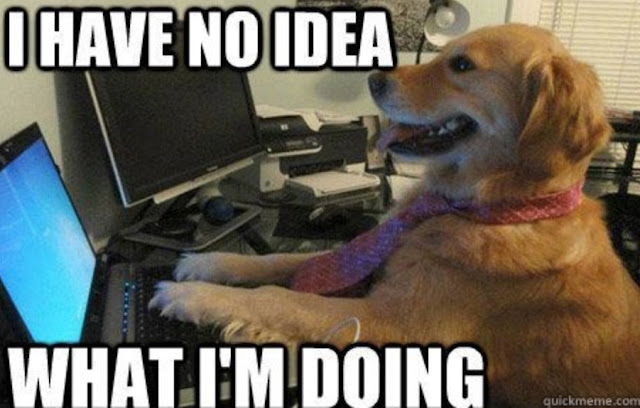 It's not too surprising since Leitch, one of the most elite politicians in the system championing "anti-elitism," is the Canadian political equivalent of that Men In Black scene where Edgar, the alien cockroach, is awkwardly parading around in the skin of a farmer. 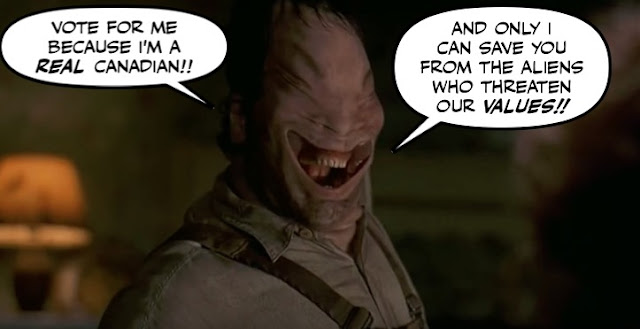 But wait, it gets even worse, and even more bizarre.

Now Leitch is posing as a great defender of Canadian women, by urging them to arm themselves.

Conservative leadership candidate Kellie Leitch is again using fear in a campaign pitch, this time to appeal to women by promising to amend the Criminal Code to make it legal to carry mace or pepper spray to “better empower Canadians to defend themselves from criminal acts.”

No doubt so they can hold their swarthy attackers at bay, until she can ride to the rescue... 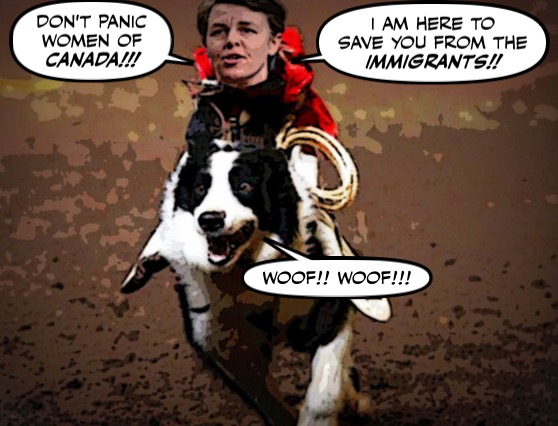 Because who needs the police eh? When you can blow a dogwhistle and get Leitch to protect you?

But yes, it's getting REALLY weird, and if you've ever seen the science fiction horror show Stranger Things, you'll probably enjoy the 22 Minutes version of Leitch's Stranger People...

Or not. Because it's not really that funny.

But then neither is this... 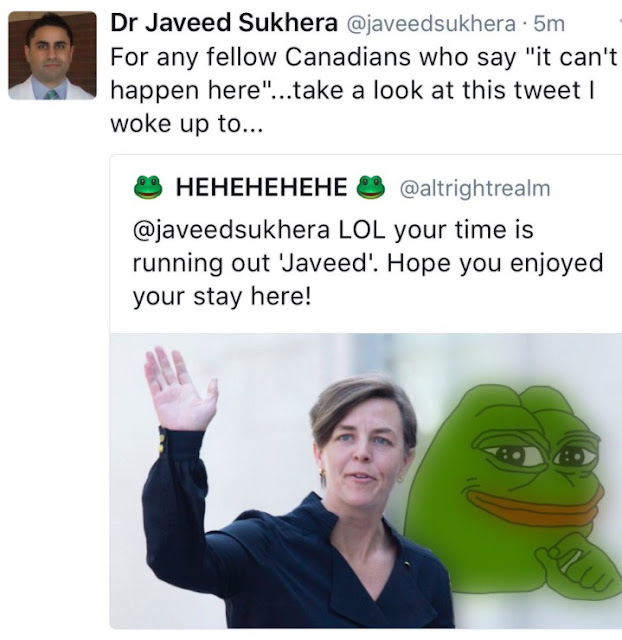 For her anti-Canadian poison is spreading.

Kellie Leitch should be ashamed of herself.

She should delete her campaign immediately.

And return to the hideous Ignoramestam where she obviously came from...

According to the last poll I read she is leading the con race. I have a feeling she's going to win it.

Yet, oddly enough, her party hasn't denounced her blatant bigotry. Oh, sorry, I just forgot the poison pill, the Reform Party, and how it was constituted. She just wants the Conservatives, such as they are, to resurrect Reform Party values.

If I saw her coming, I would want to have pepper spray.

Bizarre is an understatement Simon. She has dug in her heels and is hell bent on carrying on Harper's most repugnant traits. Even her own constituents have had it with her with "Not My MP" lawn signs popping up all over her riding. I must say the dog at the computer was hilarious and pretty much sums up the .ca screw-up.
I hope Kellie doesn't do her version of A "White" Christmas. She'd be dreaming of mace in every purse, the CBC torn to the ground and interrogating innocent immigrants. That's the cure this doctor thinks the country needs.
If she wins the leadership race it would surely place her amongst history's other notable doctors, real and fictitious. They were certainly the elites in their respective fields, Dr. Henry Jeckyl, Dr. Victor Frankenstein and of course, Dr. Josef Mengele.
JD

Simon you need to check this out. Something is not adding up right. http://www.therebel.media/thebigplan

OMG that was funny. this may give Canadian comics years of material, not to mention you. Loved the pictures.
she wants to enable people to have mace, etc to protect themselves????from what? bears? Like stay out of the woods, oh bears are coming into the cities? gee just have her stay out of metro Vancouver because we do get bears in some of the suburbs. we don't need mace, we have police departments and they do a fairly good job.

Given there are a lot of "reformers" around the conservative party, I would suggest she is appealing to them. It may get her the leadership and that nice house Ambrose is currently living in, but really..........

So if we're opposed to her we're liberal elites. Well what about Green Party elites and NDP elites? are we part of the "enemy" also or will she label any one who doesn't support her as an elite. Gee that could be fun. Simon you too could be an elite

hi MC... Don't believe any poll commissioned by Nick Kouvalis. And if I were you I wouldn't hope for Leitch to win, because if she does your Cons will be gone for at least a generation.

hi Mound...yes, Rona Ambrose made some small squawking sounds when Leitch first signalled where she was going, but since them she has been as mute as a carp. But let's hope she can resurrect the Reform Party, because that should split the party in two, and guarantee they lose the next election...

hi rumleyfips...maybe she should have used it to keep that raccoon away from her garage door, instead of calling the police and claiming the left was trying to intimidate her... ;)

hi JD...it really is bizarre isn't it? Even Trump didn't suggest that every woman carry a can of Mace. She really is turning into a reactionary beast. I don't know what her ghastly campaign manager Nick Kouvalis is trying to do, but like that dog of hers, she is definitely barking up the wrong tree...

hi MC...I saw that, and practically fell out of my chair laughing. What will Ezra Levant think of next to try to make some money...

hi e.a.f....it is a ghastly comedy, and for that I am grateful. But putting the onus on women to defend themselves makes absolutely no sense. And as for a person who collects the salary of an MP, and the salary of a paediatric surgeon, calling other "elites" that couldn't be more absurd. And while I do like to think of myself as an "elite" my bank account argues otherwise.... ;)

hi David....yes isn't that hilarious? Even those she thinks agree with her, think she's crazy. This is shaping up to be the worst campaign in the history of this country...