The Con Apocalypse and the Humbling of Stephen Harper 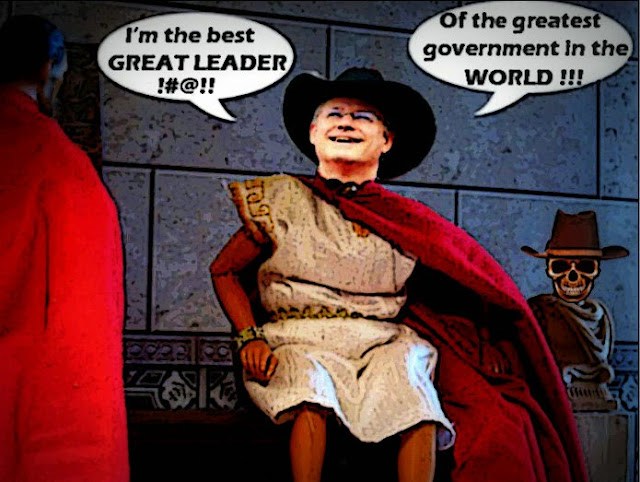 As you may remember, I was deeply troubled by Stephen Harper's wild diatribe at the Calgary Stampede BBQ almost two weeks ago.

I couldn't decide whether he had inhaled the fumes of his own propaganda, like Rob Ford sucks on a crack pipe.

Or was lying compulsively. Again.

Or whether inflamed by the sight of all those cowboy hats, he had finally gone off the deep end.

“The best country and the best government in the world is right here in Canada,” Harper said to a standing ovation from the roughly 900 people who spent $175 to attend the event at Heritage Park. “And he has nothing — absolutely nothing — of substance to offer. Canada deserves better, Canada is getting better.”

Because you have to be a little crazy to describe his grotesque Con regime, as the "best government in the world."

Or a lot crazy.

So I was amused to see Bruce Anderson suggest that maybe Harper's problem is that he's not humble enough. 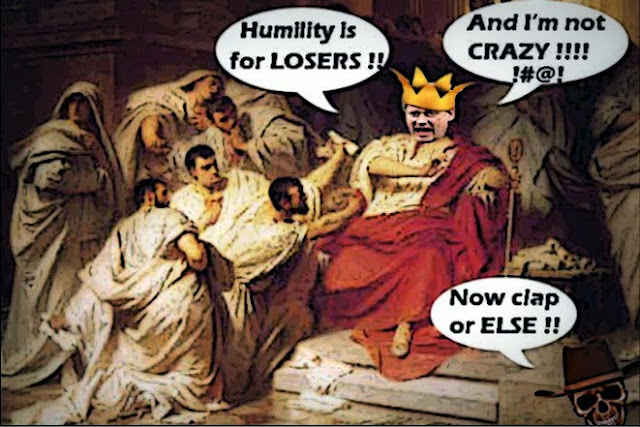 If I were advising this prime minister, I would urge him to avoid the kind of speech he delivered to the faithful in his Calgary riding last weekend. I understand he was at home, and it was a Conservative audience. But it will be party members that need to hear and carry his message forward into the next election. If they knock on a neighbour’s door, and repeat his theme, it won’t usually go all that well.

Or gently suggest that he needs a reality check.

Today, according to our latest Abacus Data poll, 35 per cent approve of the performance of the Harper government. That’s not a terrible number, by historical standards, but it’s not much of a platform for saying that yours is the best government in the world. As political strategy and rhetoric go…well, I just don’t think this is finding that extra gear.

When of course we know that Great Ugly Leader lives in his own reality, in his own parallel universe, where he is the greatest Canadian Prime Minister who ever lived.

And none of the Con stooges who surround our mad emperor, like many in our useless MSM, dare say it like it is, or tell him anything different... 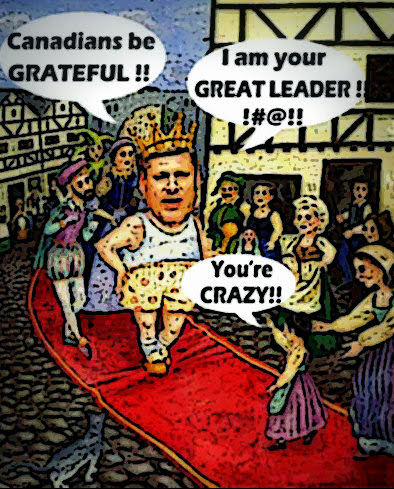 So it's up to ordinary Canadians to hit him with the inconvenient truth: he is the worst Prime Minister in Canadian history, a faker. a fraud, a maniac. And he has so much to be humble about.

There's a reason why the Conservatives use June 2009, a low point for the Canadian economy, as their starting point, writes economist Andrew Jackson in a new analysis of Statistics Canada's labour force data.

If you look at the stats before the onset of the recession in June 2008 and the big job losses it caused, you get a more fulsome -- and accurate -- picture of where Canada stands, explains Jackson, a senior advisor at the Broadbent Institute. The increase in employment is a "more modest 753,000 jobs." What's worse? There are actually 638,810 missing jobs in Canada since June 2008.

Which he would have us believe is something to boast about.

While at the same time claiming that Tom Mulcair or Justin Trudeau couldn't manage the economy half as well as he does...

When it's hard to believe that ANYBODY could do worse.

And if he insists on running more attack ads of Justin Trudeau with his shirt off.

The opposition really should be running their own ads with this general theme... 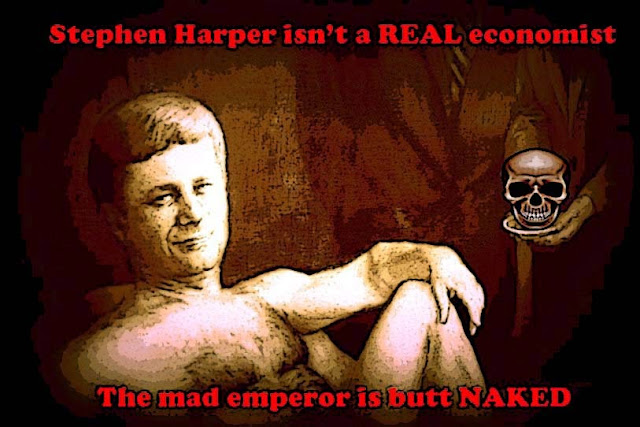 But don't worry, if they don't we will.

Because as I pointed out last night, in the end it's the state of the economy that will almost certainly seal his fate.

For he does have so many other reasons to be humble, but when you take his phony economic credentials away from him he's got NOTHING.

Oh well. I'll soon be out of here. On holiday in the highlands of Scotland, helping another cause that I'll tell you about tomorrow.

But I leave feeling confident and happy that our great Canadian cause is heading for victory.

It is the beginning of the Con Apocalypse.

We really do have them where we want them.

The Con artists WILL be exposed.

And the mad emperor WILL be humbled... 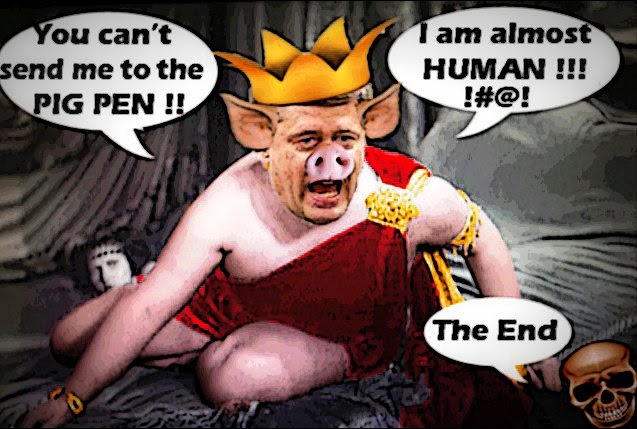 Hello, my name is Steve, and I'm an asshole.

You know, you really should offer your services to Mulcair's campaign as media coordinator for his campaign. He needs all the help he can get and you would actually have a realistic approach on how to run things in this day and age instead of him pussy-footing around harpie when harpie is handing him the spike to drive through the con asshole's political heart. If Mulcair doesn't start showing some real spirit instead of his sniveling, pseudo-rightwing groveling to the money boys, like he is now, he better get used to being the head of the official "nothing" party again for a long, long time just like the NDP was noted for for decades. For all that Layton did, it will only take one corporatist fuck-up like Mulcair to undo it all, but never fear: he also has the help of tim horwath to make sure things go right (pun intended).
What a selection: far-right, fascist cons; centre-right "libro-cons"; wannabe right "dippers'. How much more depressing does it get before we just cease to be Canada and just call ourselves "america-lite" which is where we're headed anyway. Remember the "vopos" in the concentration camps in World War II were selected from among the general population and were even more vicious than the Nazi guards in many cases. That describes harpie's obsession to out-'murkan the real 'murkans now.
Happy Wednesday. Have fun in Scotland. Drink a bit of Bell's for me!

Remember, Simon fans, that this creepy egomaniac won by roughly the same amount, percentage-wise, as those who say they approve of his performance...so lit's not get our hopes so high that we all forget to go out and vote..it'll still be critical to get the vote out to stop him, no matter how bad it looks on paper..just look at BC's voting record, over and over again for these slimeball so-called Liberals who seem to weather scandal after scandal...I'm glad that you continue to hammer at him, please continue!

Have a great time on vacation!

Some people love assholes.... ask them.

Mulcair looks like somebody who came off a Smith Bros. cough drop box... and if you're too young to know just go to google images. Women who vote are turned off by Mulcair's fuzzface and they are driven to Chippendale Clown Trudeau. Harper is still the best choice for PM of all of Canada, and that's what you can't tolerate given your hate/fear/smearmongering.

Harper and Mulcair will slapchop Justin into lil' bits and then grind him into dust to blow away in the fartuous political winds. Look to the BQ to make a recovery in Quebec because they are disappointed at the ragtag bunch of NDP MPs from university, min wage jobs, barmaid, assorted weirdos.

Best case scenario: Cons whip both leftist asses forcing them into a merger to offer Canadians a decent centre-left party.

Aggie1945
I am very concerned that Harper may be elected again in 2015, maybe not with a majority but Canadians MUST urge their representatives to push for a temporary coalition of the other parties. This is the only way to rid ourselves of Harper for good. If we keep splitting the votes between LIBERAL, NDP, GREEN etc Harper REFORMACONS will probably still get their base vote which keeps him in Govt.

David.... As long as the Libs and Dips are at each others throats and dividing the centre-left vote, the HarperCons will again win a majority in the 10/15 election. Mulcair hates playboy Justin and both will self-destruct fighting it out in Quebec.

Sensible Canadians in the ROC (excluding Quebec) will most certainly not vote Lib or Dip and by default get a PM from the greedy nation of Quebec... which gets $8 Billion annually in equalization payments from the ROC (mostly from AB, SK and NL) in perpetuity for the privilege of keeping Quebec in Canada.

To elect another PM from Quebec would be the most stupid thing to do because a PM Justin or Mulcair would rape the ROC and pile more Billion$$$ in La Belle Provence... and you better believe it.