Stephen Harper and the Scandal that Will Destroy Him 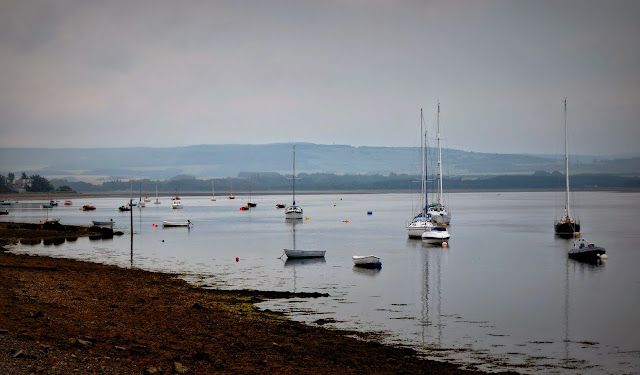 Well there I was today in the north of Scotland, when I thought I saw a mysterious creature in this little bay.

At first I thought it was another kind of Nessie. Or a big fat dolphin.

But then I realized it wasn't eh?

It was only Moby Duff... 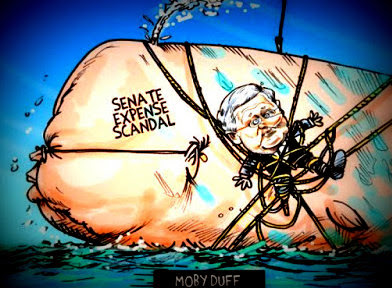 Getting ready to dive dive dive !!!!  And take down  Stephen Harper.

The RCMP announcement on Thursday was bad news for the government - potentially bad enough to hasten the next election or Harper's retirement from politics - because it is the first scene in a new act, which will feature a close examination of the facts.

Because since Ol' Duff now faces the real possibility of some time in the slammer, you can be sure he'd like to make Harper sweat in the witness box... 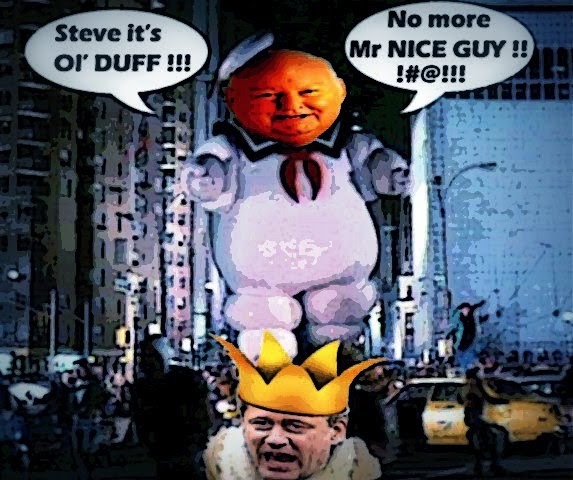 In his big speech before the Senate, Duffy referred (with relish) to documents in his possession that he will reveal "when all of the players are under oath and the email chain can be seen in its entirety."

And since if Harper tries to avoid the hot seat, it could only make matters worse.

Practically speaking, it's difficult to envision a scenario where the political risk of appearing in court as a witness for either the prosecution or the defence would outweigh the optics of publicly refusing to do so. It could also give the defence more leeway to put forward an alternate theory without fear of being contradicted from the witness box.

And since the timing couldn't be better. For us.

The bad news is there will be many opportunities to remind voters of this business, starting with Duffy's first court appearance, on Sept. 16, the day MPs return from their summer break.

It could very well be the tipping point.

Depending on what emerges from the trial, it may well be the tipping point for many Canadians, already uncomfortable with the Conservatives’ modus operandi but who have, to this point, held their noses and supported Stephen Harper.

As far as voters are concerned, many of the details are irrelevant – the overriding impression of the Conservatives that will be left is that they are parcel of rogues.

The scandal that not only knocks Lord Harp off his throne, but flushes him into the sewer of Canadian history. 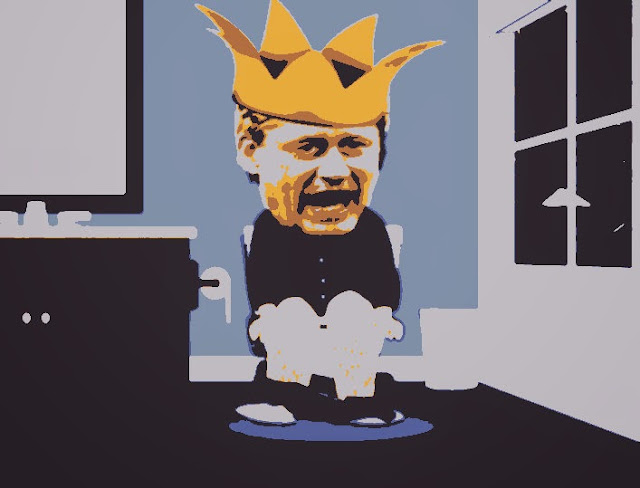 The Senate spending scandal has thrown the Conservative government off-track, shredded its credibility, demoralized the party and appalled the public. And if Duffy is to be believed we haven’t yet got to the bottom of this government’s cronyism, bullying, deceit and coverup. The Tory brand has been sadly tainted. And there may be more to come.

Oh well. That's all I have to say from this side of the Atlantic this morning.

I have to get back to Glasgow for the start of the Commonwealth Games... 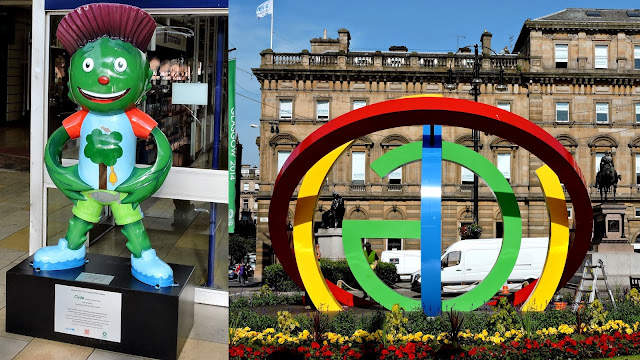 And I'm going to be rather busy for a while. But I will try to post a few more stories while I'm here.

And I will be keeping a close eye on that other athletic criminal contest in Canada... 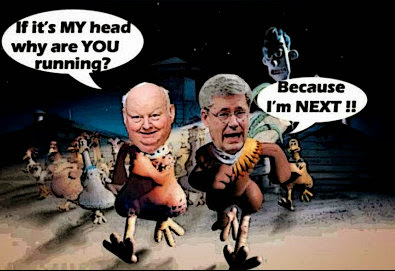 The one the Cons can only lose.

If you knew what people in Europe think of Canada these days you would be shocked and/or depressed.

But I tell them that Stephen Harper and his Cons are only an aberration.

They are the most evil and sleaziest government in Canadian history. But that nightmare is almost over.

They have been exposed. We will humiliate them beyond belief.

And then we will destroy them... 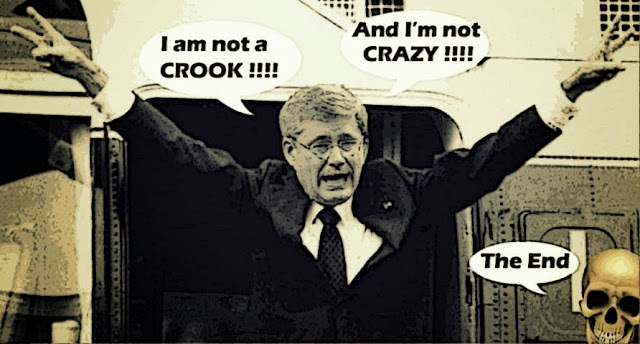 This Duffy thing is really rather weird..doesn't this whole criminal charge thing simply beg the question..why was it that Wright wasn't ultimately charged with anything but Duffy was?
Is it okay to bribe, but not accept bribes? Huh? Wha....?
Emperor Steve got some 'splainin' to do...

I wonder if the prosecution case would be weakened if Duffy's case would not be weakened by being denied the testimony of a participant named by Nigel.

Hopefully Duffy's lawyer, on Sept. 16 , will waive all preliminaries and ask to proceed immediately.

I have read elsewhere that old Moby Duff has already intimated that he aint going down alone. If anybody knows where the bodies are buried, it's him. Let's hope he makes good on his promises. I think a plea bargain in exchange for harpie's scalp is a wonderful idea for the r.c.m.p. (royal conservative mounted police) to consider if Duff doesn't meet with an untimely accident first or just simply disappear beforehand. I aint sayin' . . . I'm just sayin' . . .

hi mizdarlin...the RCMP apparently doesn't believe it can prove that Wright had the intent to corrupt, or achieve personal gain from giving Duffy his own money. But none of that really matters. It's the political effects on Harper's tired government that count. And one way or the other they will be devastating...

hi rumleyfips...Wright will testify, and I wouldn't be surprised if he claims that Duffy extorted the money from him, and that all he was doing was trying to save the taxpayers from footing the bill. But as long as he's on the stand he can be asked about what Harper knew, and that could be very damaging for Great Leader...

hi...if you look at the big picture it's clear that this scandal can only do great damage to the Harperite cult, no matter what happens in court. But yes,Duffy has a bad heart, and with all this added stress I worry about whether he will make it to court...

my feeling is this is another show for the taxpayer, and that sure the RCMP can use Nigel as a witness to say he was blackmailed by the evil duffster, but since harper has already separated himself from Nigel and had fired him, he could say that when Nigel told him the whole story he kicked him out then and there.
or another scenario, as this seems likely too, that this is another nontrial like the robocalls(that was painful to watch unfold as canada deserved better), and since the evidence is hidden away between the RCMP and the rest with Duffy. All Harper has to do is bribe duffy to take the blame and give him a slap on the wrist, and promise to help his family after this is over. Duffy would definitely take money over clearning his name.
and really at this point, how is it going to affect Harper, as its rumoured he is going to call an early election. So if that happens( or even if it doesnt) this trial is years away from being played out. Duffy will probably die of a heartattack before he ever sits infront of the judge:P
and if harper plays his fraud cards right and doesnt get caught, he can steal the election again with his socalled stupid rightwing conservative moronic base that doesnt seem to care what horrible acts he is behind.
As long as the libs dont get in( as cons seeth at the corruption that is tied to the libs, ironic, or just pathetic:P)

Ontarians lost over a Billion$$$ and they reelected the corrupt Wynne Liberals.... so why wouldn't Ontarians reelect the Harpercons over a measly $90k ?? Answer that!

@anon 1:17 are you getting a bonus for going into hostile territory? Every party in that election ran on stopping the gas plant. No matter who was elected the cost would have been the same. Thats why Wynne won the people saw through your stupid argument.

people are listening, have faith, Harper has run out of bullshit

okay Steve... why will true and loyal Canadians in the ROC generically vote Liberal or NDP to get by default another PM from Quebec? Ain't gonna happen... believe it.

People forget easily. This case has only resurfaced because the charges were filed, but if this does not go to trial by 2015, people will forget again. Do not think the MSM will remind people. the MSM are owned by the same people who support Harper and his herd.

Between now and trial date expect to have the MSM report on any number of stories about how sleazy Duffy is. By the time it comes to trial, if it does, Duffy will have been convicted in public opinion. Harper and his herd, not so much. Don't expect the other political parties to go out of their way to keep this in the public eye either. Unless Duffy writes a book, such as "on the Take, the mulroney years" by Stevie Cameron, much of this may be swept under the carpet. They filed 31 charges. Does seen a bit excessive. Perhaps they want to "scare" Duffy into taking a deal, with no jail time, no trial, and a nice cheque, in exchange for a guilty plea.

We need to remember Duffy is getting older and he doesn't want to go to jail. he also isn't in great health, so who knows the Conservatives could get lucky. Lets hope Duffy writes his book and quickly or this will simply go down as a fun story.

Nigel Wright, well he is in England with a nice new job. Will he come back to testify. Haven't seen him yet and don't expect to. Will the "crown" ask him to return? Most likely not. You see its one thing for the RCMP to lay charges. its another for the Crown to go to trial.