The Con Regime and the Never-Ending War on Veterans 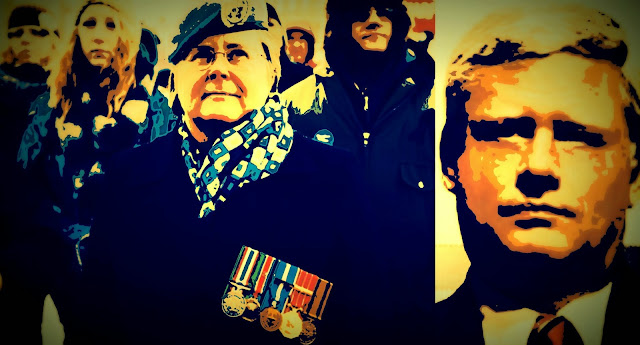 I've written quite a few posts about the disgraceful way the Con regime treats our veterans.

And about the disgusting way their depraved leader claims to be standing up for our men and women in uniform.


God bless all of our men and women in uniform. #cdnpoli pic.twitter.com/xR8LvJBlgS
— Stephen Harper (@pmharper) June 10, 2014


While betraying our wounded soldiers so miserably. 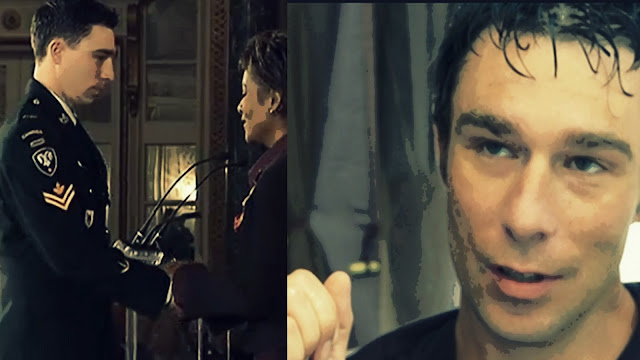 A decorated Afghanistan war veteran with post-traumatic stress disorder says the only help he got from military counsellors was he was given a rock to squeeze when he wasn't feeling well.

"The counsellor that brought me into her office handed me a rock and told me when I was feeling bad to squeeze the rock and try to think about something else, and sent me on my merry little way," he said.

And try not to throw up, or get as angry as I did. Because that's the absolute limit.

And what makes it even worse is that anyone who has ever had to deal with the scourge of PTSD knows exactly how that wounded soldier must feel.

A few weeks ago I told you about the heroic struggle of Jenifer Migneault. 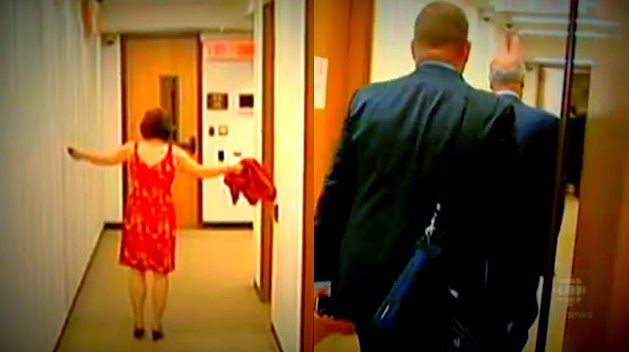 To get justice for the wounded, and support for those who love them.

And I've also told you about my struggle to get help for a friend who suffers from depression. My despair at seeing how little help was available.

And my boiling anger at seeing how he was humiliated by second rate care in third-rate facilities.

Where they might as well have given us a rock to squeeze, like they gave Colin Fizgerald, so little else did they have to offer.

And this so soon after we learned that there are so many homeless veterans out there the Con regime can't even count them. 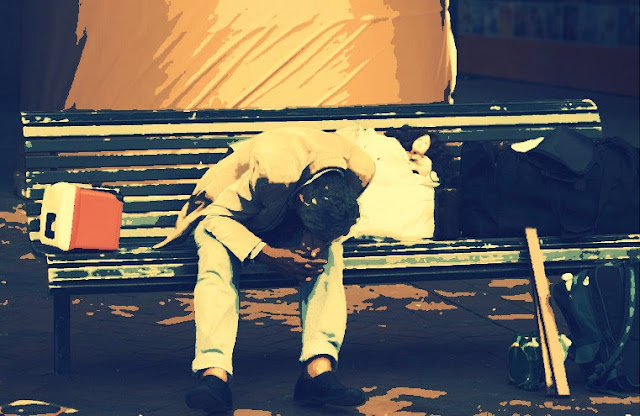 The number of homeless people identified by Veterans Affairs Canada has skyrocketed over the last five years, jumping from just 35 in 2009-2010 to 236 last year.

But the true figure could be much higher. Experts suggest there could be thousands of veterans living on the streets yet to be located by government and volunteer organizations.

Which is beyond shameful.

Oh well, that's all I have time to say today, because I've got to get ready to take my friend on a long bike ride, and he WILL smile today.

Especially when I hand him a rock with Harper's face painted on it, and ask him to squeeze it as hard as he can. For both of us.

And all I ask is that whether or not you know a person who is suffering from depression, remember that it could happen to anyone, it hurts EVERYONE.

And please do what you can to defeat the ghastly Con regime, and its monstrous leader. 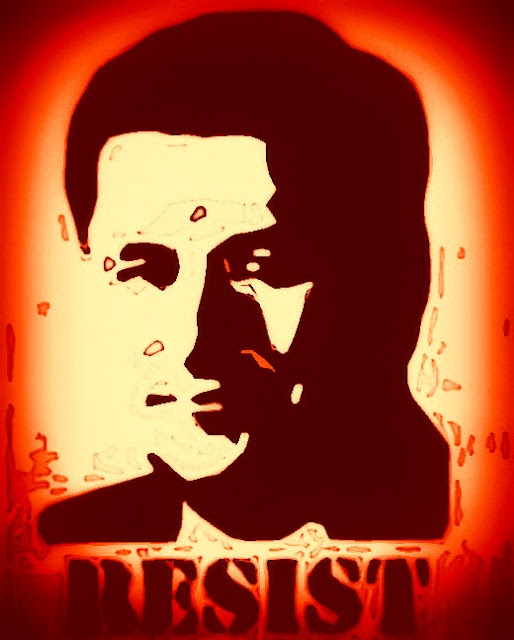 During WW2 PTSD was called, battle fatigue or shell shock. 6 members of my family served in WW2. Two of those family members, came home with *battle fatigue*.

Decent Canadians want our Veterans looked after, come hell or high water. Our WW2 Vets still wake-up, yelling from nightmares of that war. Our young Veterans of to-day, have their own nightmares. The evil Harper and his cabal, couldn't care less about our Veterans. Harper only cares about Harper and that's all he cares about.

Stalin, Hitler and Mussolini were all paranoid dictators. They too were sociopaths, that only cared about themselves. Dictators have no conscious so, they are very capable of dirty deeds. All we have to do is, look at Harper and know this is so.

Don't make the mistake of thinking, Harper cares about our Veterans. It doesn't bother Harper in the least bit, our Veterans live on the streets. Harper throws our Veterans under his bus too.

When WW II veterans came home, Canada was still a rural society. It was much easier to "get" lost and live. Many joined the Legion. It was a form of group therapy and self medicating. As a kids I remember men who had lots of metals and were heroes, and they all drank, but the times were different.

Today, its much more difficult to cope with what is going around you, when you suffer form PTSD. Life is much more difficult even for "sane" people. A decent psychologist runs about $180 and up an hr. If you don't have the money, you are just shit out of luck. I don't blame the psychologists, they have to make a living. I blame the federal government for not .providing the funding for Veterans to get the help they need. Living on medication isn't much of a life for Veterans either. Not having enough money to live on is a major problem. What the government ought to be doing is simply assessing Veterans and if you got "problems", you go on extended sick leave, continue with your salary and benefits and they pay for the head doctors.

The issue of how Harper and his herd treats Veterans maybe in fact his undoing come election time. Even in Alberta, with his base, they may go along with all sorts of things "the herd" does, but when it comes to Veterans, even Cons may have had enough. It might be in the interest of the other political parties to keep this issue front and centre until the election, whether its the Greens or the Quebec separatists, we all have a stake in how the Veterans are treated. For a Green is maybe as simply as if the Cons treat men and women who served this country with honour, and this is how they are treated, think of how they'll treat our environment. It would be entertaining to know how those of the Christian right think about harper's herd's treatment of Veterans. Given all their "christian values" and such.

National Defence came under fire in January for failing to live up to a decade-old promise to have roughly 450 mental heath professionals on staff. Last December — at the height of the suicides — the department only had 380 of the jobs filled, despite an injection of $11.4 million in 2012 and complaints by the military ombudsman.

*
I have sent Fantino several emails since June 3, asking:

How are you defining "mental health professionals"?

How many mental health professionals did Canadian veterans have access to before the Afghanistan mission began in 2002?

Fantino has never responded. Tomorrow I will phone his Ottawa office.

David I'd suggest Fantino is referring to the number of shrinks in Canada, perhaps psychiatrists. You see, if their G.P.s refer them to psychiatrists, the provincial medical plans pay for them. Psychologists are usually on your own dime. 4,800 mental health professionals, gee don't know where he got that number. Perhaps he is counting all the psychiatric nurses we have in Canada.

I'd be surprised if you ever got an answer from Fantino's office. My take on it, they are just waiting for the Vets to die, give up or kill themselves and so in the minds of the Cons, the problem will be solved. Harper and his herd will never do right by the Vets or anyone else in this country who isn't part of the elites they cater to. We have seen Harper throw his own under the bus when it suits him, so for him to care about Veterans he doesn't know, not happening.

It might be interesting to look up and see how many psychiatrists there are in Canada. bet you its about 4,800

hi Steve...I'm not going to get into the circumcision debate, except to say that I have a foreskin and I'm hanging on to it... ;)

hi anon...yes PTSD has been with us forever just under different names, and in the First World War some of those who suffered from it were executed, including some Canadians thanks to our cowardly generals who unlike the Australians sold them out to the British. In a way I think PTSD says something good about humans. It tells me that they really weren't made for war. But its effects are devastating and like other forms of depression it hurts the afflicted and all those who love them...

hi e.a.f...the problem treating our soldiers is just part of a larger problem. Mental illness is not treated as well as other human illnesses, and as a result, I can step from a gleaming emergency room, and into the mental health area, and it's like going back in time at least forty years. I believe that one in five Canadians will experience some kind of mental illness during their lives, so it seems obvious to me that we need to do better...