The Bigot Rob Ford and the Homeless Gay Kids 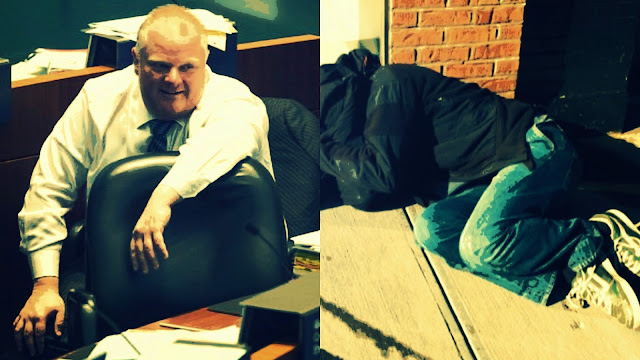 OK. I know that only last night I strongly suggested that the time had come to ignore Rob Ford.

That since by now it has been clearly established that he is a crass bully, a vulgar misogynist, a low life thug, and a filthy bigot.

All that remained was to defeat him, humiliate him.

Or let nature takes its course... 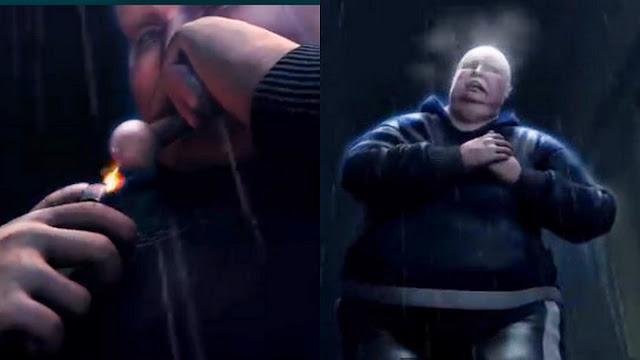 If the Polar Bear God of the Great White North should choose to save us that way.

But I can't ignore this.

Mayor Rob Ford was the only member of council to vote Thursday against a proposal to find ways to better assist homeless young people who are gay.

Ford, who has a long history of homophobic remarks and opposition to gay initiatives, placed a temporary “hold” on the proposal Tuesday to prevent it from passing unanimously without a vote. He did not explain his opposition.

Not just because the need is so great and so desperate...

In a 2013 survey, 21 per cent of people in youth shelters told city researchers they are part of a sexual minority. Research suggests family conflict and rejection make gay young people particularly susceptible to homelessness. They face unique difficulties in shelters, such as homophobia and physical abuse.

And so many LGBT kids would rather sleep in the streets than in a regular shelter... 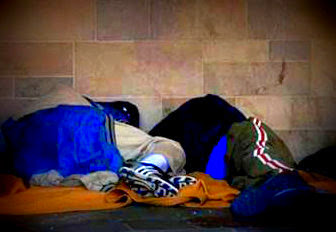 “You know what they do in the shelters,” one queer youth told Abramovich. “They tie you to the bed and beat the s--- out of you.”

But also because it really makes me wonder whether Ford is baiting anti-gay voters. 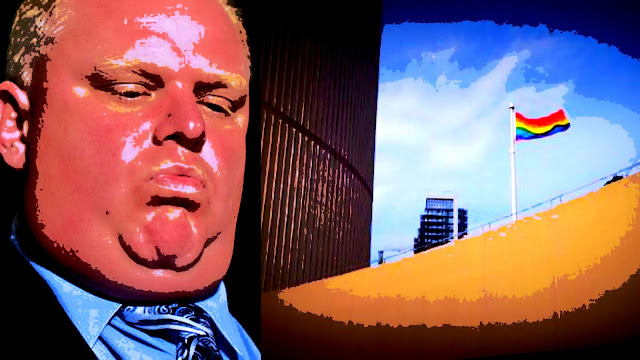 If Rob Ford hopes to gain votes by appearing homophobic, Toronto’s mayor is in for a surprise come election day, says Darrell Bricker, the CEO of Ipsos Public Affairs.

“If you’re somebody in this country who is anti-Semitic or racist or homophobic, if you have hate in your heart in any way, you’re going to be speaking to a smaller audience.”

And despite what Darrell Bricker says, I also can't help wondering how bigoted is the Ford Nation?

Neil Thomlinson, a professor of urban politics at Ryerson University, agrees with Bricker that the segment of the population Ford appears to be going after is quite small, but he suspects it’s larger than surveys suggest.

The fact is, Thomlinson said, the tactic could score him some extra support on the right, or at the least solidify his base.

“He’s got nothing to lose, is the bottom line, and he does have something to gain.”

Or help wondering what kind of country I'm living in where the mayor of its largest city is a low life bigot.

But what I do know is that there are way too many LGBT kids homeless and suffering out there. Many have been thrown into the street by their own parents.

And that after surviving a trauma like this one...

They need all the help they can get.

I do know that Rob Ford is a beast, and unfit to remain in office.

I know that I will now work even harder to defeat him.

And of course I know that I was always right, when I always said:

You can't put lipstick on a Con hog... 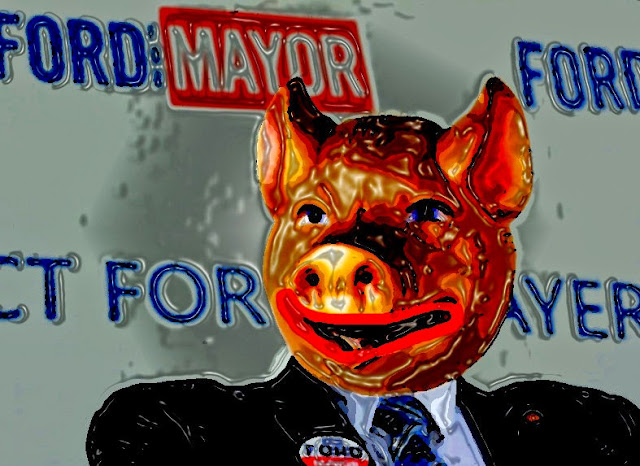 The conundrum of Ford is how to keep enough Ford Nation voting for him to split the vote with Tory, but ensure he isn't a serious threat to any sane candidate. The media and opposition bloggers have been conscripted or co-opted into doing the Conservative Party's dirty work. The dirty work of dragging Ford through the political pig sty so the Party and Tory doesn't have to be seen slagging the mayor they once supported despite knowing his personal history (Flaherty was a "close personal friend" of the Ford family).

Doug Ford as Rob's "campaign manager" is securing his place in the Conservative Party by setting up all who would take outraged shots at his fresh-from-rehab brother.

The corporate media will do the Con Party's bidding, but the blogsphere could do well to expose the "game". Ford Nation would be outraged at the duplicity of the Conservative Party and Tory, as stand by their man. Ford would split the Conservative vote...

hi anon...yes you're right, Ford is a useful instrument for splitting the Con vote, and if he did pull out of the race it would favour John Tory. So yes, let me modify my instructions to all first responders out there: Should Ford collapse from having inhaled too much crack or too much of his own fumes, please administer CPR, at least until the election is over... ;)