Rob Ford: The Beast, the Bully, and the Bigot 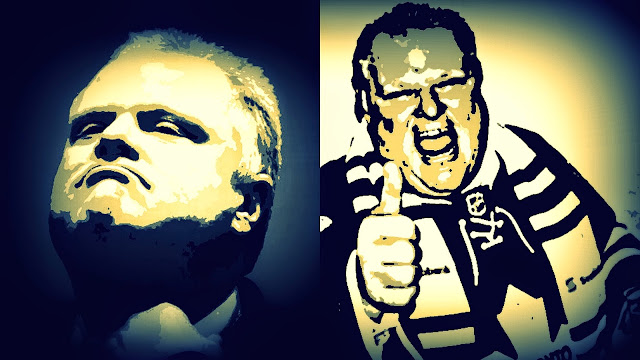 Well I think this much can safely be said about Rob Ford. You can send him off to a luxury rehab in Muskoka, where other millionaires like him live.

You can shoot him full of horse tranquilizer, so you can try to put him on a healthy diet, or load him onto a treadmill.

You can even keep him from hanging out with dangerous gangbangers...for a month.

But you can't take the bully out of that ghastly gorilla. 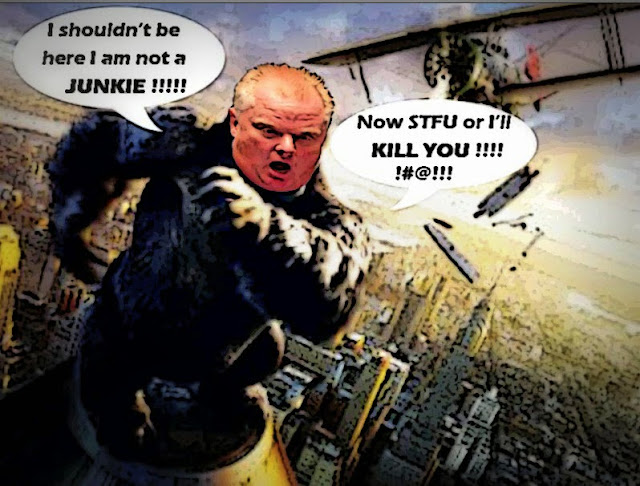 Mayor Rob Ford pushed and scuffled with fellow rehab residents and was so verbally abusive that he was kicked out of his group therapy program, according to people who have knowledge of his two month stay at GreeneStone.

Or cure his ugly homophobia.

Toronto Mayor Rob Ford is brushing off fresh charges of homophobia, after he stayed in his seat during a long ovation by city council to recognize the success of the WorldPride festivities.

The city’s troubled leader set off a fresh controversy just minutes into Wednesday’s council meeting when he remained rooted to his seat while other councillors got to their feet, clapping in tribute to those who had worked on the 10-day celebration – an image that quickly became widely circulated on social media.

And so ingrained is that bigotry that he couldn't even lift his fat ass out of his seat for a moment to recognize the work of those who helped organize the hugely successful WorldPride festivities... 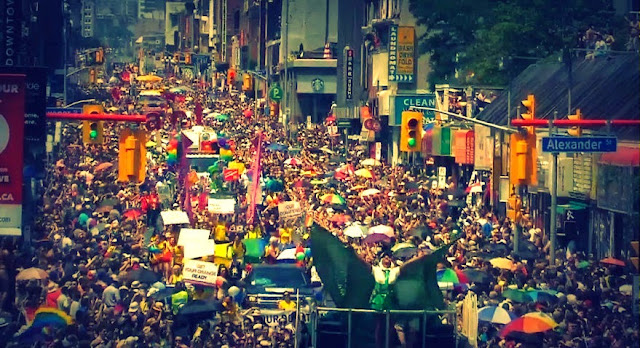 Even though two million people attended this parade alone. Even though it was an amazing celebration of peace, love, and diversity, that made Toronto and Canada look good in the eyes of the world. For a change.

And even though the festivities pumped millions and millions of dollars into the city's economy.

But then that's homophobia. It's a disease that stunts people, or deforms them, and makes them say and do horrible things.

And that's Rob Ford, a beast, a bully, a vulgar misogynist, a brutish bigot, and still living in denial. 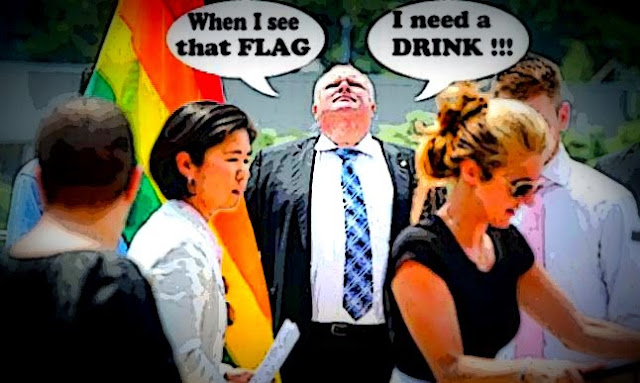 It was an unmistakable snub from the mayor – the same mayor who has declined since taking office to march in the Pride parade; the same mayor who tried to have the rainbow flag hauled down from a flagstaff at City Hall when it was raised to back gay rights in Russia. So much for the idea that he didn’t really mean it when he made those vile remarks. His sullen boycott of the WorldPride ovation gave the lie to that dubious claim.

Like the so called Ford Nation, which will now be called to explain itself.

The mayor’s behaviour should give pause to those voters who are still planning to vote for him in the Oct. 27 election. Recent polls show that around one in five has that intent. Perhaps they think they are voting for low taxes or subways or better customer service at city hall. But if Mr. Ford’s display at city council is anything to go by, they are also voting for bigotry.

And the good news? The Moron Nation is shrinking.

That bump in the mayor’s numbers that the pundits were expecting upon his (sorta) teary-eyed return from rehab – what pollsters call the “dead cat bounce” – hasn’t happened. In fact, voters are turning off in droves. The latest poll released by Nanos Research on Monday, July 7, spells trouble with a capital T for the mayor, putting him in third place for the first time – behind (John)Tory and Olivia Chow.

And it's almost safe to ignore him.

Not having to pay attention to Ford sounds like an attractive proposition, but pretending he’s not there won’t exorcise the memories. For that to happen, we need to be reminded periodically of just how effed-up his reign of error has been. That’s a required part of the process of our own recovery. In the meantime, enjoy the shit-show, knowing it’ll all be over on election day, October 27. Or maybe sooner at this rate.

This Con horror show is almost over, and one way or the other it will have a happy ending.

Either we will defeat the bigot bully, humiliate him, and send him off to California.

Where he says he will go if he loses.

Or the beast will not be tamed.

And it will destroy itself...

When he loses the October election, his mom doug will tie the city up with challenges and lawsuits on robbie's behalf for the next couple of years. They won't go away even when they are officially booted out of office.
If you think Kimmel had a load of ammo handed to him by the ford morons before, wait 'til you see what they hand him by October 30th. The most degrading and humiliating part of this show regarding Toronto's mayorship hasn't even started yet.

As the place where I was born (Palm Springs, California) is one of his hangouts, I'd like to share with you, Simon, that it is considered one of the Gay-Friendliest towns in the world..they even have their own Gay Palm Springs website, and welcome all LGBT folks...so Ford should have a fabulous time there...though, have to say, I fell for anyone in that State who has to put up with him... but please, please go, Rob!

california, lol, they are the most progressive state in america, only rivalled by Hawaii, he would be better suited to florida, or texas. But in texas they will just shoot him, the moment he gives a person a dose of his nasty mouth:P

and yes I cannot wait to see the election results, it should be humiliating but you know the Fords will just blame it on Robbies "disease" and say the Star ruined him. They never take responsibility for their horrendous behaviour and every member of their family enables this bullshit, wife, mother, cousins etc. Too bad Ford sr wasnt alive to kick some sense into his boys, that seems to be the only person they feared.
and Rob has no intention of staying sober, im sure he was drunk or stoned the whole stint in rehab and he really has more bottoming out to do, and its probably going to be in the news for awhile after the election.
but eventually what folks will read, is Rob Ford, dead of a drug overdose, or heartattack. Or worse a car accident.

even if you did't support gay pride, rights, etc. you would have to get up and applaud those who worked so hard to make the festival the huge success it was and the money it brought into the economy. for that alone, the organizers deserve a huge round of applause. Now of course for those of us who are a tad more progressive, it was a great festival, embracing the GLTB community and all its diversity. its actually humours, to have gone from something which was so "different" to an annual event which is so "main stream".

Rob Ford does't get it, nor will he ever. He has been to "rehab" because it was the only way to take a break to make his "come back". He won't change. Some people just don't know how. As much pain as he has caused others, I do feel sorry for him, for the pain he has caused for himself. Harper and his herd cause pain, but they know what they are doing and do it with a "full deck". Rob Ford, not so much. He maybe the mayor of Toronto, but at some level he most likely is still a little kid being bullied by his brother. It will be much better for him and the city, if he is not re-elected. Once Rob Ford is no longer a politicians, much of the stress of being him, may just leave, and he might be able to have some sort of life. As it stands now, it can't happen. He can't even feel happy about a parade, which is a lot of fun.

What's with the various spammish links that I assume Google inserted into your post. Like part time work from home making almost $300 per day. I imagine that they have claimed this right in the user agreement. But it is a new one on me, it infests other blogs as well, like Norm Farrrell. I would tend to thing they will do it to my posts as well, unless they feel too few folks visit me (especially these days when I rarely post even though we know the political sewage everywhere means no lack of subject matter.

Hi Simon! bagkitty over at rabble had a post about an even more serious homophobic utterance on Ford's part, not endorsing a study on a homeless shelter for LGBT youth. This is a matter of life and death.

Long before the recent cruelty to a gay man I know described in that thread, one of my best friends in the world was thrown out of his home in rural Québec for being "un pédé, un serin"... Fortunately he survived to become a leader of early Gay Liberation movements here (and always had the greatest respect for the Lesbian movement and its autonomy). Sadly another of our gay friends never recovered from his shunning, despite many friends and comrades, and killed himself far too young. Stories like this make me think about him, which I suppose is a good thing, painful as it is.

hi anonymous...Thanks for depressing me. I had visions of Rob For on his way to California in the back of a garbage truck. But yes, the Ford brothers will no doubt make an ugly show of it, but as long as they are out of power they will only hurt themselves...

hi mizdarlin....thanks for that info. I guess I'll have to alert the Gay Resistance in Palm Springs that Robbie is on his way. So they can give him a proper welcome... ;)

hi Deb...well that's useful info too. I must write to the Texas Tourist department and ask them to send me some glossy pamphlets, so I can on pass them to Ford and try to encourage him to move there.. ;)
But yes, I doubt that anybody can save him now, and since rehab clearly hasn't worked, I'm fearing the worst, and hoping for the best...

hi e.a.f....yes you're right, this was not a declaration of support for the gay cause, it was a matter of common decency, to thank the relatively small group that organized that hugely successful festival. But then the man has no decency and that's the main reason he should go...

hi kootcoot....I don't know what you're talking about since I haven't given anyone permission to run ads on my blog. This is an ad-free blog and will always remain one. I can't see any ads when I call up my site, but I will look into it, and do what needs to be done. Thanks for the warning...

hi lagatta...I didn't see that story until you alerted me, but I now have written a post about it. Because as you point out it really is a matter of life and death. LGBT youth make up a disproportionate percentage of the young and homeless, and their plight is truly desperate. And of course Ford is even more of a homophobic hog than even I thought he was...