Stephen Harper and the Baby Killers 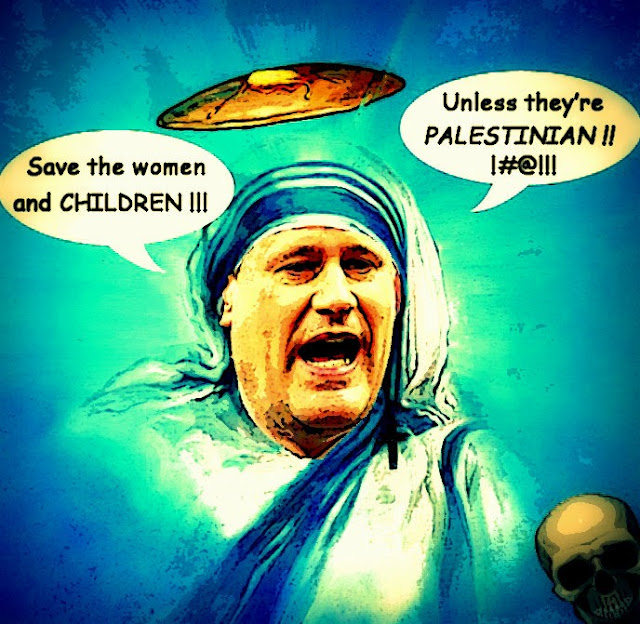 He is a man who lost his moral compass a long time ago, if he ever had one.

He is a liar, a bully, a cheat, a grubby little dictator.

But at least he won't be able to pose as Mother Harper anymore. As he was doing just two months ago when he hosted this summit.

Not when he's ordered his stooges at Revenue Canada to go after organizations like Oxfam... And of course, not when he is cheering on Benjamin Netanyahu and his ghastly baby killers.

It was as the children played and the old men watched that the weapon fell from the sky and exploded in their midst. In an instant, the eight youngsters and the two men were eviscerated.

And those who would turn Gaza into a children's graveyard. 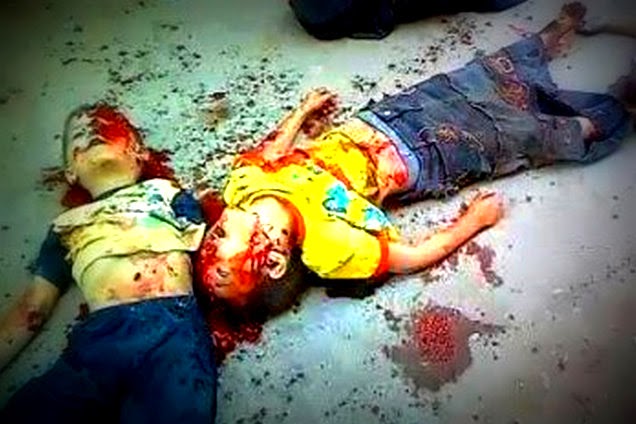 ‘Tomorrow there’s no school in Gaza, they don’t have any children left.’”

“In Gaza there’s no studying, No children are left there, Olé, olé, olé-olé-olé.”

Or would rape their sisters or mothers.

A professor and researcher for a right-wing Israeli think tank suggested in an interview earlier this month that raping Arab women was the only way to deter suicide bombers.

Oh yeah. So much for Mother Harper.

Now watch this video by the British TV journalist Jon Snow on the plight of the children of Gaza...

And then do what every decent Canadian must do.

Demand that this obscene slaughter of children end NOW.

And send this murderous hypocrite to the place he rightfully belongs... 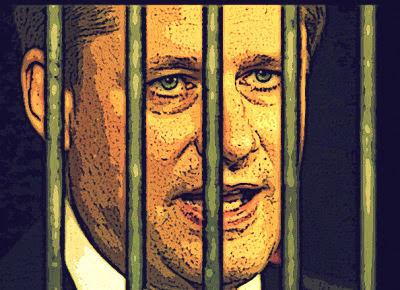 Israel uses “aid” money from USA and Britain and Canada to fund Israel’s ongoing occupation of Palestine and Syria and its military campaigns, which in turn serve as an laboratory to develop weapons, surveillance technology, and tactics of population control…

***** that are then marketed across the globe.

The crisis in Palestine is the same crisis as the whole world, for the ideological doctrine, based on a psychopathic sense of entitlement and complete lack of empathy towards the Other, that drives the right wing fanatics that are in control of that accursed land is the same as the one that drives the people behind the financial/military/industrial complex of the world, in other words the 1% (in fact one could argue that they are the same people). If we do not stand up for the innocent in Palestine, if we continue to allow one of the greatest injustices in human history to continue, then it will be no surprise when the Palestinian's fate become all of our own. As the safeguards and protections that our forefathers put in place, through their sacrifice, toil and blood, to protect us from exactly that type of oppression and exploitation are eroded away daily through collaborating "governments" and organizations. What is happening in Palestine is a window to our future.

New phrase for the history books: "Palestinian Holocaust"
I betcha the u.s. doesn't begin carpet-bombing Jerusalem to make the zionistas stop slaughtering Palestinians.
I betcha it's NEVER going to break any laws in the u.s. or Canadiastan to be anti-Palestinian.
I betcha nobody is EVER going to spend a couple of billion dollars erecting monuments to the Palestinian innocents who were massacred by israel if any of them escape this genocide.
I betcha that if nitwityahoo is ever prosecuted and found guilty of war crimes, harper and baird still defend him.
I betcha that, if by some total miracle, harper had to live in the Gaza strip for one whole month without there being a cease fire, he'd be pissing himself every day of his life for fear of his worthless life.
I betcha harper will NEVER have the guts to stand in front of any normal, able-bodied Palestinian man and defend what his buddy, nitwityahoo, is doing to that man's countrymen.
"Give Peace a Chance" helped get Lennon killed and a lot of other good people, too. Maybe the only thing left is to provoke a shooting war with Russia, then put our heads between our legs and kiss our asses goodbye. It seems to be what everybody is praying for now anyway.
Have a cheery Tuesday night!

I betcha you're RIGHT!!

Cheers to you, too!

Who better, to learn from, than Israel?