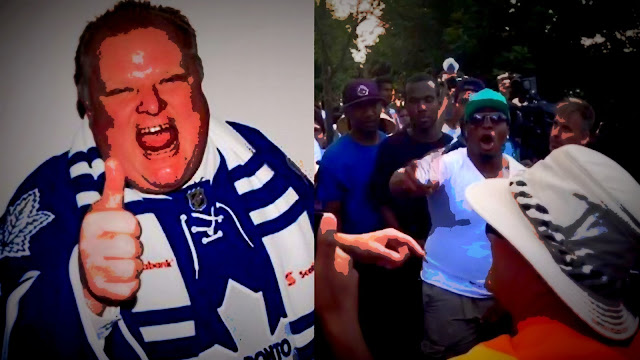 He is in addition to all his other flaws, a ghastly anti-gay bigot.

And so it seems are many members of the Ford Nation.

For when six gay activists turned up at the so-called Ford Fest to protest against his vicious homophobia.

This is what happened...

And the pictures tell the story no matter what Doug Ford claims.

Councillor Doug Ford is apologizing to gay rights protesters taunted with homophobic slurs and physical intimidation at Ford Fest but says they share some blame.

And what they do show beyond a shadow of a doubt is that Rob Ford IS a gay baiter. It's a major part of his appeal.

Standing up for homeless LGBT kids is not a crime. 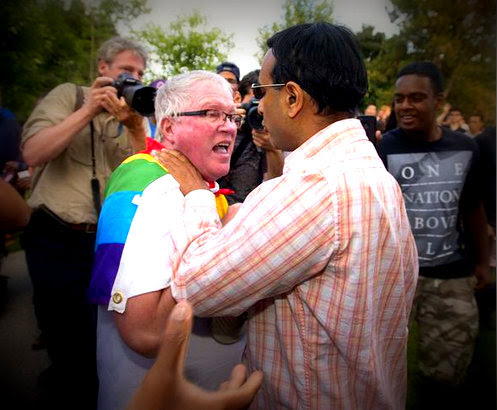 The Ford Nation is the Bigot Nation.

The ones Stephen Harper is trying to woo.

And when the election finally arrives.

They will all go down together... 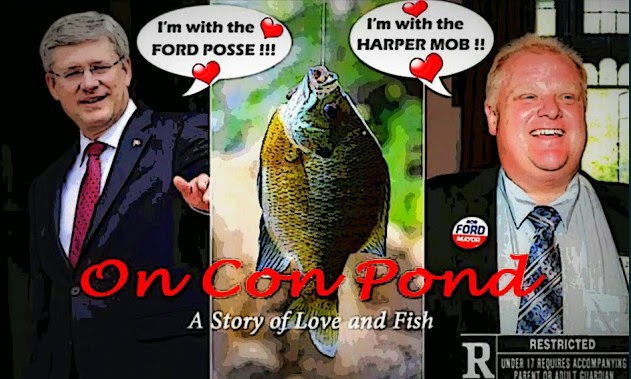 That was sickening to watch. Their hypocrisy. Their ignorance. Their persecution complexes. Stupid chumps.

DoFo? STFU, k? Your family has a Sobriety Coach,

who needs an ANGER MANAGEMENT COACH.

Hope the city of T.O didn't pay for that phoney 'rehab' shit.

He/they ALL (cons) should all be arrested for Hate Crimes.

Among a multitude of other Con Crimes.

It ain't gonna help ya, in the final tally.

The boyz who showed up at the Ford Fest knew that was going to happen... they were provocateurs... soooo obvious.

I think that Toronto's finest ought to be asking Ron Banerjee some questions...

In case you aren't aware the clown doing the chocking is Ron Banergee A disgusting anti Muslim racist who once invited the EDL here, hangs out with the JDL and contends that Muslims have a nefarious plot to take over the west by out breeding us. He also says Islam is not a real religion

Hi anon...well if that's true they sure exposed the real face of the Bigot Nation...

Hi thwap...yes it was a disgusting spectacle. But at least it showed everyone what kind of people Ford is attracting, and hopefully it will help defeat him...

sad that there are soo many stupid people in the world. Seriously, those folks chanting for ford, I would like to think its a joke, but its not. wow~!. I guess the ford nation are disenfranchised cynical voters, and Im not sure they are capable of listening to reason, so the protesters served only to expose them, they certainly arent going to change their mind at this pt. Most of the intelligent ford supporters abandoned him long ago.

I really sat and wondered about all the people at the "picnic". Like why would they go? Why participate in something involving a person who has caused so many problems? Some may go to see a train wreck, but this wasn't that type of event. They appeared to go and "celebrate" the fords. Some may think ford is a "great guy" but really what has ford done for his wife, his city, etc. Not much that I can see. perhaps some want their 15 seconds of fame, and not getting it decided to reflect in someone else's infamy.