The CBC Cuts and the Slow Dismantling of Canada 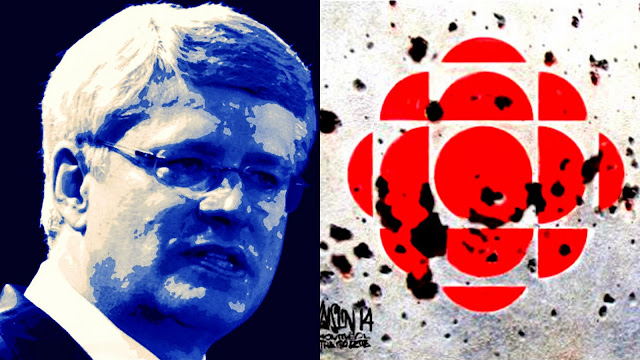 I don't know how many Canadians realize how badly Stephen Harper has wounded the CBC.

But from what I hear from a friend who works there, and who expects to be among the 2,000 employees who will soon lose their jobs, the wounds are practically mortal.

And the Cons could be gnawing on its bones in less than three years.

And if you want to know how much pain that is causing, all you have to do is read this sad letter.

There’s a pervasive sense of impermanence at the CBC these days, and it’s not conducive to creativity. We hear the cliché “death by a thousand” cuts a lot when the CBC is mentioned. It’s an apt cliché. Canadians might not care now, but they will, and then it may be too late.

Because not only are the Cons hurting all those employees, especially the younger ones. The ones who will be laid off first, because Shelley Glover is refusing to lend the CBC money to encourage older workers to retire.

But Harper and filthy un-Canadian regime are also dealing a mortal blow to the creative forces in regions all over this country.

There will probably always be a CBC, but it will become just a trusted news brand, a symbol the politicians will bring out when it’s convenient to present Canada as a civilized and advanced nation. What is being squeezed out of the public broadcaster, drop by drop, is creativity. Creativity makes culture. You can’t mandate creativity, you have to nurture it.

And as I've said before, what makes it even more depressing is that Harper is being aided and abetted in that disastrous initiative by the CBC's useless managers, and its Con friendly President Hubert Lacroix. 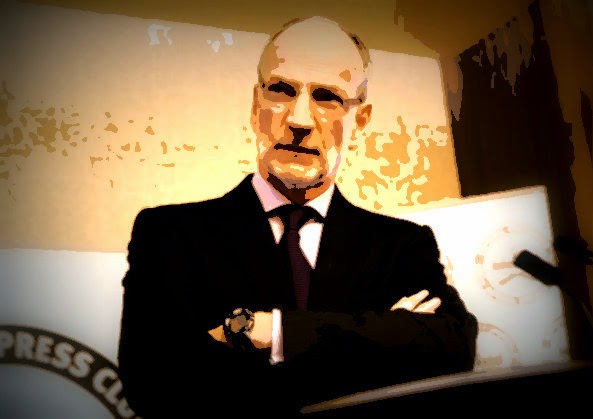 The CBC’s enemies are not only circling their prey from the outside, including the Conservative government with its unrelenting budget cuts. Its enemies are also working from within. The CBC has a compliant board of directors overwhelmingly stacked with Conservative party donors and a president, also conservative, who appears ready to implement any budget cut in virtual silence.

Who would make it sound like he's repositioning the CBC, instead of making it smaller and weaker. But then of course that's exactly what Stephen Harper wants. Because as these Star readers point out, Harper isn't just dismantling the CBC.

Over the years CBC has made me feel more connected to this amazing country and to my fellow Canadians than any penny-pinching politician could ever imagine. Harper prattles on and on about the economy but he is continuously burning the very bridges that unify this great nation.

It’s just another sellout of our public services to the ever-grasping invisible hand of the free market. It’s the dismantling of Canada bit by bit . . . nation building in reverse. We need the next election before there is nothing left of us. Maybe by then our federal government will be reduced to a P.O. box in Ottawa.

And as that CBC producer says if we want to stop him the time to speak up is NOW.

It’s easy to blame the Harper government for what’s happening now, but where are the voices of dissent from the Liberals and New Democrats? My colleagues need to hear, loud and clear, that Canadians do care about what happens to their public broadcaster.

The CBC either can't or won't defend itself, so we must defend it ourselves.

Please sign this petition. Or any others out there.

Write to your MPs.

Tell them the CBC belongs to all Canadians.

And prepare to defeat this rabid Con monkey.

Before he destroys our country... 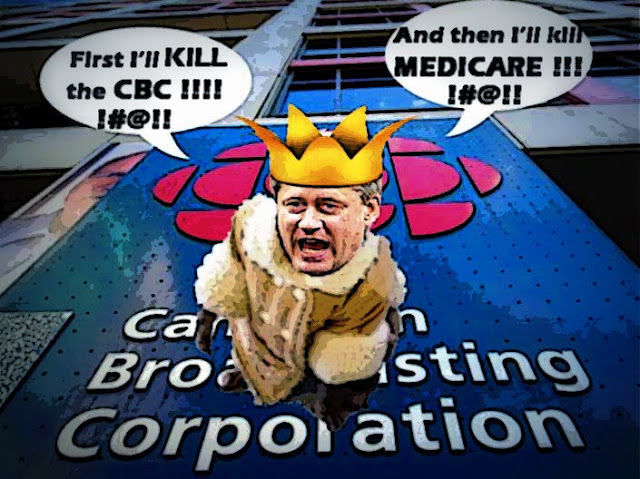 Simon I am going to have to disagree with you on the CBC. Broadcast is done, its toast. Zombies who watch TV al day are not the national audience. The CBC should be funded fully but only for investigation, and to fund Canadian content online. Netflicks is the model. Instead of hundreds of hours of crap, lets make 13 hours of pure Canada excellence.

There is no doubt in my mind that the CBC, especially its radio division, acts as a national unifier, Simon. Many years ago, when I was teaching in Manitoba, I could always count on the CBC on my road trips back to Ontario to keep me connected. No matter where I was, whether it was Lake of the Woods, Spanish, Hornepayne or Sault Ste. Marie, there was always a comforting national voice reminding me I was still in this magnificent country of ours. Reminders of our country and its magnificence have always been objects of hatred to this soulless government, as we see in the ongoing devolution of the Mother Corporation.

hi Steve...I disagree with you completely. Polls show that Canadians are watching more television not less, and that number is bound to increase as the population ages further, and the boomer generation retires. Also, I only really watch documentaries and movies on TV, and watching them on my mobile phone isn't quite the same thing as watching them on my humungous wide screen TV.
Also, by moving away from television where you can still charge a lot for ads, and counting more on revenue from the internet which is harder to get and not so lucrative, they will only make their financial problems worse. And finally, the CBC is mandated to cover this country. That includes reaching out to many Canadians for whom broadcast is still it, And while the TV experience can draw people into sharing a common experience, the internet can only atomize it...

hi Lorne...I know what you mean by that comforting national voice. I will never forget how during the Great Ice Storm in Montreal almost all the private stations in the city went off the air, until all my transistor radio was picking up was the sound of American stations. Then out of the gloom came the CBC loud and clear, telling us what was happening, and throwing open its lines (the phones were still working) to let people share their experiences. It was an unforgettable moment and the CBC was never so magnificent. Harper's assault on a Canadian institution like that one is simply unforgivable...

Why did Sun News Network censor my comments on the CBC?
http://www.thestar.com/opinion/commentary/2014/05/28/why_did_sun_news_network_censor_my_comments_on_the_cbc.html