Kathleen Wynne, the Cons, and the Moody's Mob 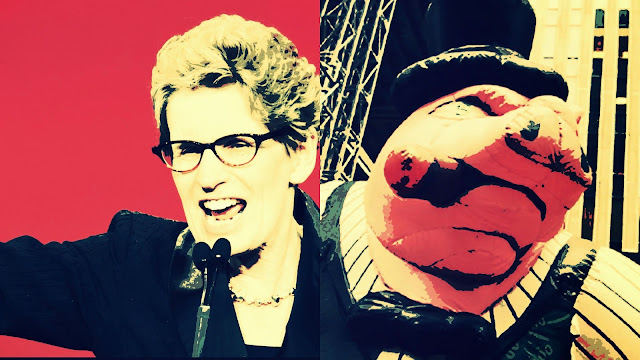 I'm pretty sure not many people in Ontario, let alone the rest of Canada, took time off from their busy lives, or Summer, to watch Kathleen Wynne's Throne Speech today.

And neither did I eh?

Because summer is too precious, life is too short, and since I'm flying to Britain soon, I've got other things to worry about.

But it was an interesting declaration of faith in the power of putting people first.

Premier Kathleen Wynne has rolled out a progressive, energetic agenda in her first majority Speech from the Throne. Vowing to lead from the “activist centre,” her Liberals appear determined to honour their campaign pledges to put people first, and then some.

And what happens next could play a major role in the next federal section.

Because even before the speech was delivered, the Moody's mob was threatening dire consequences. 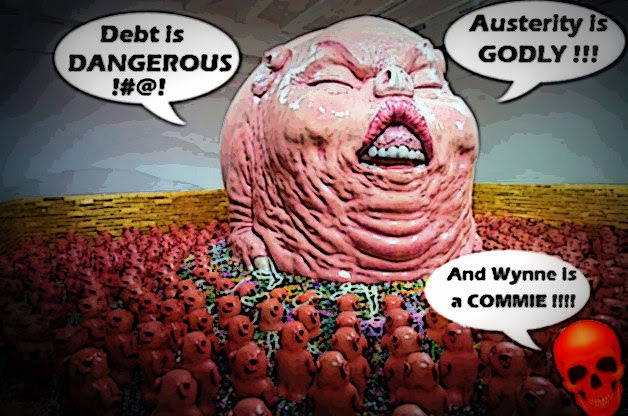 "Ontario's rating could be downgraded if the province fails to provide clear signals of its ability and willingness to implement the required measures to redress the current fiscal pressures," said Moody's.

And even though as Kathleen Wynne points out, you should be able to do more than one thing at a time...

But then what else do we expect from credit rating agencies like Moody's?

Who are nothing but the high priests or enforcers of the existing Capitalist Order.

The corrupted failing system where the rich are getting richer. 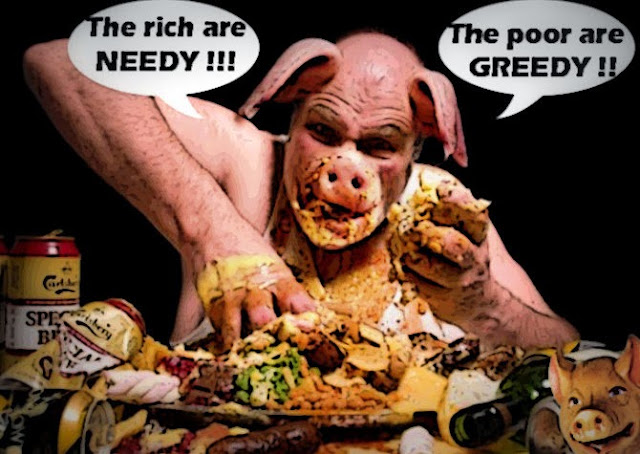 While the poor get poorer.

The Wall Street hogs who will stand no deviation from the policies of austerity that have caused so much human misery here and all over the world.

And of course are only echoing what the Cons, whose economic policies have only benefited Big Business and their beloved province of Alberta, are saying themselves.

So you can see where this one is going. If Ontario is downgraded, Harper, Oliver and the other oil pimps will use that to claim that Justin Trudeau's Liberals would do the same thing to Canada.

I mean can't you just see them? 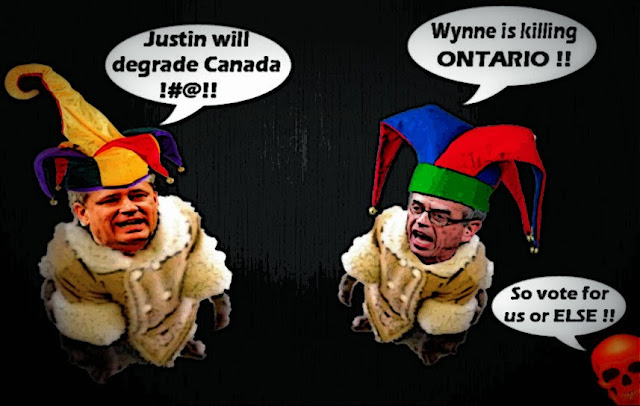 And the good news? I don't think it will work.

I think Canadians are ready for something different. I think they want a more activist and more Canadian government. A government that helps poor children, and boosts the CPP so more seniors can live in dignity.

I think they are looking for less austerity and more hope, and that's a big reason Justin Trudeau is so popular.

It will be a challenge. the existing order is disturbed.

But if Kathleen Wynne is successful.

She can help send the whole grubby Con gang.

To the place they belong... 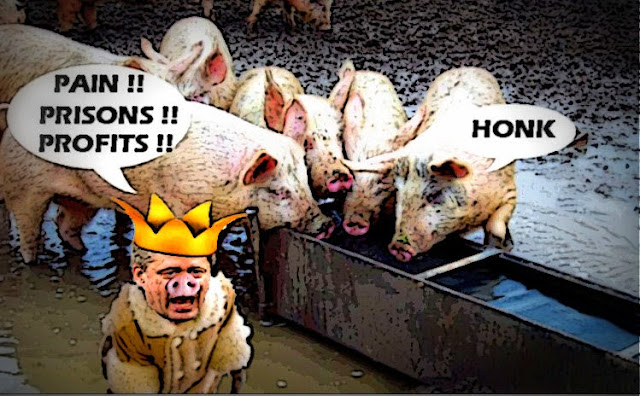 and moody's is just another capitalist/fascist figment of some deluded motherfucker's imagination that pretends to give substance to phantasm. Fuck them. If Wynne makes good on even 2/3 of what she said, this province will become and stay the driving force in Canada for a hell of a long time to come and we will see the end of CONvict domination. Now if we can just get the rest of the country to realize what even the 'murkans have figured out about tarsands oil and how toxic and expensive it really is to process and to start to look into alternative, renewable energy sources sans noocyoolar as the shrub used to say (a.k.a. preznit moron).
Maybe the stars will align and the beneficent aliens will make themselves known to us give us even better gifts than velcro also! Was that a bit over the top? I can never tell. Happy Friday, y'all!

Have a good flight and a good trip!

Harper will look to Christie Clark's win in BC for inspiration and guidance - so yes, you're right about the Cons attack on Trudeau.

Will Trudeau show the discipline that Dix didn't? That is what will decide the election.

There is good news from Ontario for Canadian progressives... Ford is falling!

Irony is dead and staked to a crossroads praying for the spirits of LIttle Boy and Fat Man to finally annihilate it.

Kathleen Wynne will have a very tough row to hoe. Any province opposing Harper, will have to pay dearly. Dictators such as Harper are very vindictive and underhanded.

BC is not getting the ship building, Harper and Premier Clark gave that contract to Poland.. So now. Harper has the utterly thousands of Chinese votes and donations. There are 413,000 Chinese in Vancouver. 45,000 more want in. China controls much of BC's resources and resource jobs. He has the Jewish people of Canada votes and donations. Harper has the Canadian Ukrainian votes. Harper will have the votes from the people, who go overseas to fight with the terrorists. Now Harper will have, all of the Polish people in Canada votes too.

Harper hates the people of BC because, they oppose Harper's mad schemes. The difference in BC and Ontario is, most of BC is foreign owned. Communist China wants the Enbridge pipeline, BC's ancient forests. BC's NG There will be thousands of Chinese miners coming over for, Harper and Clark's Northern BC mining plan. Ex BC Liberal Premier Gordon Campbell is Harper's favorite henchman. He thieved and sold BC's rivers to his buddies. They put hydro dams in the rivers. Destroying thousands of fish and wildlife habitat. Therefore, BC Hydro have to buy power from the rivers, even when BC Hydro doesn't need it. Campbell also forced his stupid smart meters on BC as well. An elderly lady had a $1,300 hydro bill, she was forced to pay that bill. A single mother had a $750 hydro bill on top of her $700 rent. BC's Hydro is to go up another 60%. BC citizens just had an increase.

So if there is anything Harper wants out of Ontario? Wynne and the people of Ontario, will have to fight for their very lives. I am also suspicious of Ontario's Hydro mess too. At least in BC, we knew Campbell works for Harper. They worked very hard to dismantle BC. Did McGuinty do the same favor, Campbell of BC did for Harper?

All I know is, Canada has become rotten to the core with corruption, because of Harper.

If people actually DON'T ignore the real science on vaccinations, they'll be kicking the shit out of anybody who comes near their kid with a syringe of that fucking garbage! Of course, harpie is referring to the Kijiji version of science regarding science, as usual, n'est pas?

Moodys blessed the meltdown of 2007. Moodys makes money off the consequences of their ratings. Yes let let the free market decide, because they have a clear self interest. And we are not able to rise above our lizard brains.

Remember when Moody's helped bring down the economy...Yeah so do I

hi anon...yes, although Wynne's budget isn't as progressive as I would want because I'm very hard to please in that regard. It is still a big step in the opposite direction from which we have been travelling for so many years. And if she succeeds it could mark the beginning of something better, and the end of our long nightmare...

P.S. Of course if she fails we will have to appeal to the aliens to save us... ;)

hi lagatta...thanks. I'm not leaving for a couple of weeks, but I have a lot of things to do to prepare for the trip since I will taking some videos for the YES campaign, along with a lot of suggestions. ;)

hi anon...we have very good news to report from the Big O these days. Hudak quit the other day, Ford is going down in flames, and with the Liberals making progress, even if the NDP isn't, Harper's days are numbered...

hi anon...yes you're right irony is dead. I can't believe that the zombie Cheney is still going strong with all those fresh organs he obtained from young Americans, and blaming Obama for not intervening in the pig fuck Bush and Cheney created. But as for the anti-scientist telling people to get vaccinated that's not just irony, it's hideous hypocrisy...

hi Steve...yes I was going to include an excellent article in Rolling Stone about Moody's role in that meltdown, but it was really long, and I didn't have the energy to read it all. But all I need to know is that these downgrades are more political than economic, and hopefully will be seen as just an attempt to enforce the neocon world view...