Stephen Harper and the Ill wind from Alberta 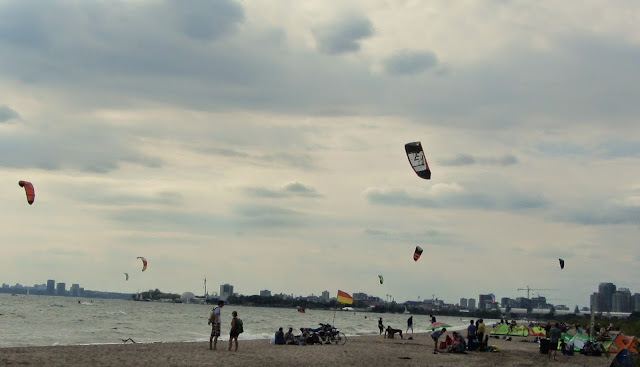 Well nobody at this beach on the Toronto Island today was complaining about an ill wind from the West.

Because it was warm and wild, and summer like life is so short and precious.

However, had they been in Calgary this weekend, they would have encountered another kind of wind. 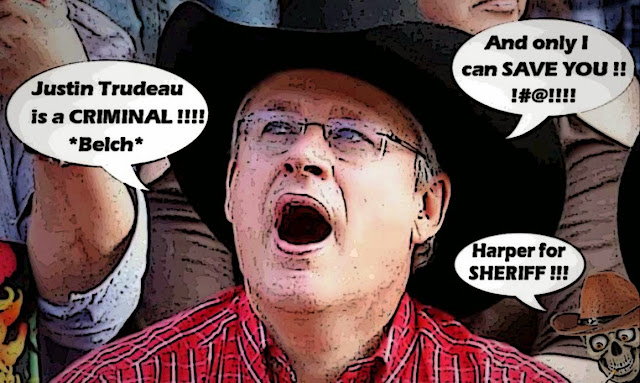 "And if, God forbid, Canadians are attacked, or robbed, if they lose someone they love to a murderer, or if they see their children driven to suicide by bullying and harassment… the first thing they want their government to do is not make excuses for criminals, but to stick up for victims," Harper said.

"In fact, Justin Trudeau has said he will repeal our reforms. Repeal, for example our mandatory prison sentences for serious, violent crime," he said. "In other words, I like to describe it this way: he will restore that key liberal principle of criminal justice...that the offender must be considered innocent even after being proved guilty."

And it tells us all we need to know about the kind of election campaign he is planning, the filthiest in Canadian history. One aimed at Trudeau, "liberal judges," the Supreme Court, and the very foundations of our justice system.

But then I can understand why Harper was feeling so aroused. After bumping into his hated rival at the redneck stampede... 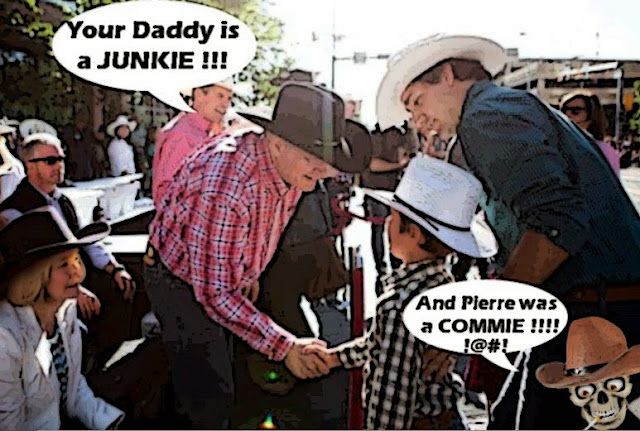 And not being able to strangle him, or bite him. Just scare his kid.

And since Canadians have heard it all before, he really does need a new stump speech.

Saturday evening, in a speech to a friendly Calgary Stampede audience, Prime Minister Stephen Harper had a fine opportunity to show that he understands the way the game is changing, or at least carve out a bit of new rhetorical territory. Instead, he stuck to the long-established path – some will call it a rut – laid down in many previous prime ministerial speeches.

Because this one really is insane, in a fascist sort of way... 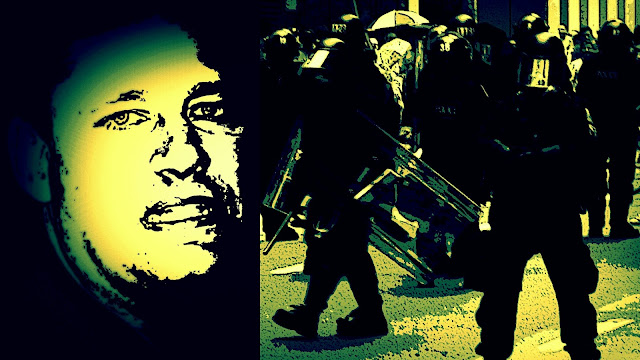 Why are we all safer with Tories in charge?

Liberals hug thugs and care only for ensuring criminals have a full range of cable TV and gluten-free dessert options in their sumptuously appointed cells. The Conservatives, thank goodness, will punish the evildoers with various mandatory minimum sentences, and never mind the lawyerly weenies and eggheads who say these don’t deter crime, and in some cases are unconstitutional.

And it doesn't work:

If it were effective demonization, one could at least try to justify it using the excuse of expediency. But it has proven for two years now not to work – including in the most recent round of byelections. The personal attacks merely reinforce Harper’s own negatives, while bouncing harmlessly off his nemesis.

Except maybe in a place like Alberta, where that kind of crazy talk goes down like a chuck wagon. 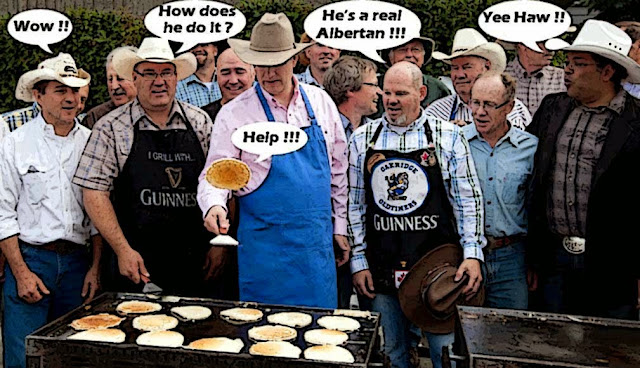 But then these days the cowboy province isn't that popular in the rest of Canada either eh?

Not after the Cons have destroyed good jobs all over the country, to favour that province and its oil sands. Even though the economic impact of those tarry ponds is greatly over-rated.

A majority of Canadians overestimate the contribution the oilsands make to the world's 11th largest economy, according to a recent poll. Non-conventional oil production - which comes mostly from mining and steaming bitumen from beneath the soil of northern Alberta - accounts for about two per cent of national output, Statistics Canada data show.

And when we remind Canadians of that inconvenient truth, over and over again, I don't think you can over-rate the impact on the corrupt, tired Con regime and its depraved leader. Stuck in a rut and out of ideas.

Which takes me back to the place, or the beach, where I began eh?

And has me summing up things this way:

There is an ill wind blowing from the general direction of Alberta.

And it is as foul as any this country has ever experienced.

But we will harness it to our advantage.

And it will help raise us to VICTORY... 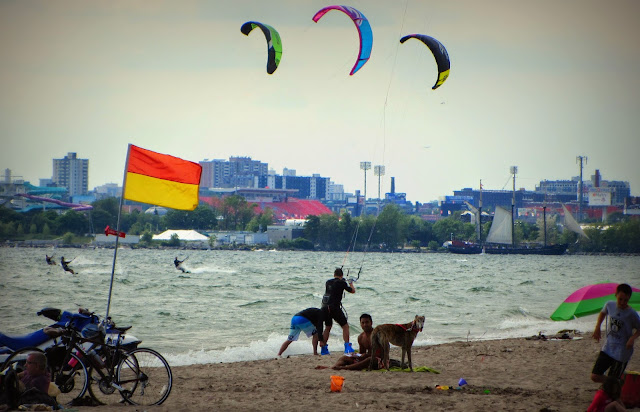 We really have reached the nadir of CON politics, when a flapjack in mid-air is the smartest entity in the picture . . .

Harper fed on the post 911 insecurity. Well people are so over it. He preaches Government can not do great economics, and then takes credit for going a $150 Billion in debt to prop up his reality foundry.

Justins cry should be Two Seats, Canada has judged better then you, and left them with two seats.

Harper and his cabal think nothing of lies, deceit and cheating to win. Harper is the one and only Canadian PM ever, to be held in contempt of Parliament. Harper and his minions are not true Canadians. To me they are a fascist dictatorship regime.

Harper's attack on the Chief Justice. The expense fiasco. Wright did aid, abet, and paid the bill for a corrupt Senator, that was stealing our tax dollars. The PMO also sanitized Senators expense claims. MacKay and his put down of female Judges. Harper's attack on our, old and our young Veterans, which is an utter disgrace. The underhanded attack on Sheila Fraser. Jason Kenny's lies regarding the TFW, he knew of this a very long time ago. A fellow applying for a resource job, made a courtesy call to a HR Officer. HR said, there were 4,000 applications for just ONE job. Kenny seems to think, that is a shortage of labor. What a joke? Companies at the oil fields are paying $18.00, some $24.10 per hour. How do you move your family up there and pay $300,000 to over $1 million for a home, on those wages? Canadian resource workers don't have the perks, foreign resource workers have.

The only true words Harper has ever uttered are? I am the law. I make the rules. And by the time I get through with this country? You won't recognize it. Those words are from, a true fascist dictator. Harper is no Conservative, what-so-ever. He even lied about that.

Stephen (to Xavier) : "Bwahahahaha! Your daddy thinks the budget will balance itself!"

Xavier (to Harper): "But my daddy says we'll be moving to 24 Sussex Drive soon!"

Justin (to Xavier): "Son, ask Mr. Harper why he and his wife are wearing the black hats."

I meant to ask? Has anyone news of Sask Boy, I had read he is very ill. He is very devoted to the Canada he loves. His site is always a visit for me, everyday without fail.Sask Boy is another bright light for Canada, just as Simon is.

Living in Fort McMurray I can definitely vouch for what you say when it comes to what some of these companies here pay. I think we saw some of the blow back here in the results of the recent by-election. When you factor out the rest of the riding, The Liberals easily got more votes here than the Conservatives in Fort McMurray. People here tire of hearing how important the region is to the economy followed by silence when it comes to dealing with our infrastructure challenges. Personally, I'm sick of Con supporters telling me that since I (supposedly) make so much money here that I should just be happy and not whine. They fail to see that quality of life is important too and there is much more to life than just money. What a lot of thoughtless dicks they are!

Harper and his herd's histrionics may no longer work in Alberta either. They aren't all dumb. There are military bases in Alberta and the people have seen how Veterans have been treated. It isn't going over well.

Yes Harper and his herd put Alberta first. We have only to look at the Free Trade deal with Korea. He was crowing about being able to ship more beef to Korea, but how many ranchers will actually benefit. We do know this deal will have a very negative impact on auto production in ontario, along with other manufacturing.

Harper may have his core in Alberta but there are others who aren't that amused by his "antics". There are people who noticed what he tried to do with the Supreme Court appointment. There are those in Alberta who will remember the senate scandals and the robo calls. it is up to the opposition parties to all remind voters of what Harper and his herd have done.

One thing about Albertans they don't care much for leaders who travel around a lot on the taxpayers dime. Just ask Allison Redford. they may not like seeing the expense claims Harper and his herd have put in for all of their travels.

Nice to see the breeze in Toronto. We in Greater Vancouver are enjoying some also. Its nice when all the political hot air is blown away and people can enjoy themselves in the sunshine. Its about the only thing some of those right wing politicos haven't taxed.

hi Edstock...yes, I must admit that when I saw saw that picture, and I saw that it was being distributed by the Con Ministry of Propaganda and Disinformation, I didn't know whether to hold my head in my hands at the state of our country. Or howl with laughter. Or both. But yes, poor us and poor flapjack... ;)

hi anon 12:08 pm....yes Harper is trying to change our country beyond recognition, and he is the worst Prime Minister this country has ever known. But as I said in my post, his monstrous act will come back to haunt him, and although he refuses to accept it, his time is almost over...

hi Way Way Up...I find what you say fascinating and very encouraging. Although I live in Toronto just a few blocks away from Bay Street money has never meant as much to me as it does to so many others. I am fortunate to live comfortably, but I live as simply as possible, and the quality of ,life is more important than anything else. My neighbourhood is full of young Bay Street slaves who no doubt make more money or will make more money than I do. But when I look at their faces streaming home from work, or hear them grinding their teeth like a swarm of hornets, I don't envy them at all. I'm proud to say I don't own a single suit or a tie, since I was forced to get one for my brother;'s wedding, I never have to kiss ass, and I am as happy as a bird in a tree... ;)

hi anon...the only thing I've heard from Scott Tribe's notice at the top of Progressive Bloggers is that he is doing better thank goodness, but still faces a struggle ahead. I am keeping my fingers crossed, because like you I consider Saskboy or John Klein a wonderfully human part of our little Canadian blogosphere.
And of course I regret that I haven't told him that for a long time. Isn't that the worse thing? You take people for granted until suddenly they are not there. I will hope for a full recovery and try to be a better person...

hi e.a.f...yes, as Way Way Up, our wonderful correspondent in Fort McMurray says, Harper's act is wearing thin even in Alberta. Because like the rest of us many Albertans are concerned with more than just making money. The Cons have done them no favours by trying to drive down wages and flooding them with foreign workers. And as you point out the scandals and the ghastly behaviour have turned them off as well. It's a very healthy development because as I suggested in the piece the economic strains in this country have the potential to destroy its national unity...