Stephen Harper and the Parizeau Connection OMG. This is scarier than the French Connection eh?

I'm sure you know the famous story about how Jacques Parizeau decided to take a train trip from Montreal to Banff in 1969.

And how he would later say: "When I left Montreal's Windsor Station, I was a federalist. When I arrived in Banff, I was a separatist."

Because the three-day trip made him realize how big Canada really is. And that it would need a strong central government to hold it together. Something that Quebec, with its desire for more autonomy, could never accept.

Well can you imagine how the old man must be feeling these days? As he plucks grapes in his French vineyard.  Watching Stephen Harper help the cause of Quebec independence by breaking up the rest of Canada.

Alberta stands to rake in more than half a trillion dollars in taxes over 25 years should three major pipeline projects – all facing stiff opposition – proceed, a new report says. British Columbia will receive just a trickle in comparison, even though the proposed Northern Gateway pipeline and Trans Mountain network will snake through the province and oil tankers will ship out of its ports.

By jove. That must be worth at least three Scotch and sodas, and is almost enough to make him forget that unfortunate remark about how money and the ethnic vote cost him the last referendum.

Because let's face it eh? If Great Cowboy Leader decides to force that pipeline up the behind of B.C., he will not only face a popular uprising there. The rest of country will also erupt. And there will be referendums EVERYWHERE.

The other provinces will not stand to see Alberta get filthy rich while they get poorer thanks to the Dutch Disease. Ontario will finally revolt. If Alberta doesn't get what it wants the oil cowboys will start screaming "We wants to SEPURATE  !!!" You know they will.

And if the PQ should by chance be elected in Quebec, it's sure to use all of this as another reason Quebecers should leave Con Canada, or scary CanAlberta. Especially since the Parizeau gang cult is back.

So now a new generation of Parizeau students replaces the previous generation at the side of a leader who has turned into something of a survivor. This all matters because the Parizeau wing has always been associated with a desire to do something about wanting to separate, not just to sit around wishing Quebec would separate some day. The questions about Marois are whether she’ll win the election in several weeks, and whether she’ll be trouble for Canada after she wins. The presence of these two at her side increases the likelihood that she’ll be trouble.

They are at least three times smarter than Harper and his cult. And they know that if there is a referendum, Great Cowboy Leader could never represent the interests of the rest of Canada, because everybody knows he only cares about Alberta. And he couldn't sell his vision of Canada to Quebecers, because they find it horrifying, and they hate him so much.

But then does Harper really care? After all, he himself was once an Alberta separatist, with wild and crazy plans to build a "firewall" around the province. And turn it into the Republic of Hee Haw. 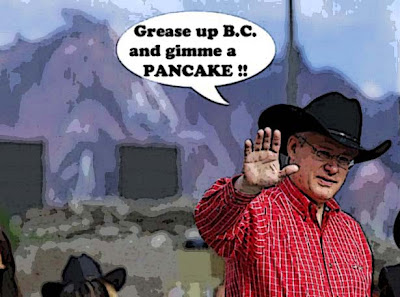 And the only thing he is focused on like a laser cobra is serving the interests of Big Oil, and destroying the power of government. For as I mentioned the other night, when it comes to his vision of Canada, he's on the same wavelength as Parizeau:

Can you believe it eh? They both believe they're smarter than anybody else. They both love ANYTHING British. They both set out for the cowboy province, and they both ended up as SEPARATISTS !!!  Because one loved Quebec, and the other loved Alberta, more than they did Canada.

Hmmm...I think we can use this in the next election campaign, in addition to all the other filthy stuff.  Especially when Harper calls Mulcair a separatist sympathizer. Because you know he will.

But of course that's still three years away. And in the meantime our country is in great danger. So let's get our act together.

And make sure that Great Ugly Leader's separatist crusade for Big Oil and Greater Alberta.

Ends up as badly as Parizeau's did... 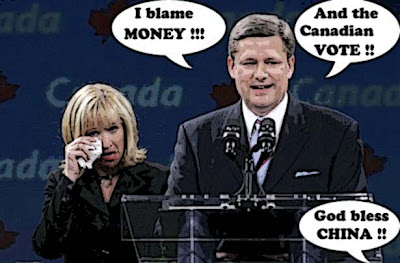 I have always thought Harper's endgame was to be Governor of Alberta.

loved the column. it is so true. Harper doesn't care about Canada, he just cares about himself & China. He wasn't even smart enough to send Quebec the information they wanted to set up their own long gun registry.

To prevent Stevie Slime from sending a pipeline through B.C., as much as I love Canada, I think I might vote to seperate, if it meant it would keep our enviornment clean. We could always join again, but that pipeline & those tankers, the spills woudl be forever.

it really would be quite easy to form other countries. Quebec on its own, the Maritimes might join Quebec or go on their own. Ontario certainly can go its own way but Sask & Manitoba might join them & alberta would be on their own as would B.C.

It doesn't make sense to have a country split so you have to travel through another country to get to the other side of yours. It is better to just have seperate countries. Yes, Harper the man who destroyed Canada in more than one way.