The Bigot, the Blowtorch, and the Flaming Cheerios 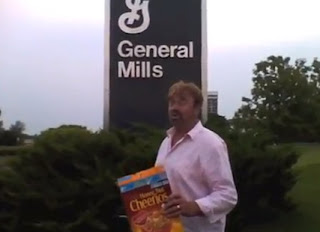 It must have seemed like a great idea eh?

To a bigot as dumb as this one.

Show how much you hate General Mills for supporting gay marriage.

"We do not believe the proposed constitutional amendment is in the best interests of our employees or our state economy," the company's vice president for global diversity and inclusion, Ken Charles, is quoted by the publication as saying. "We value diversity. We value inclusion."

By turning up outside company headquarters, with a box of cheerios in one hand, and a blowtorch in the other.

Only to have things go disastrously wrong.

Unfortunately, the video seems to have been pulled. No doubt after after the anti-gay lobby and/or the Department of Homeland Security had a chat with him.

But luckily I was able to grab some screen caps before that happened so you can get an idea of its comedic value. 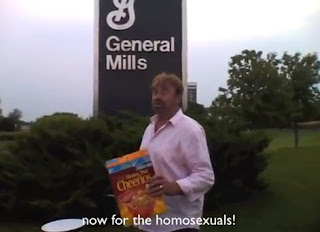 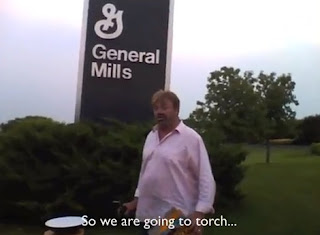 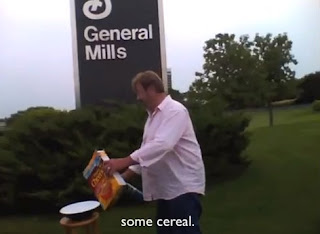 The moment it all went wrong and the cheerios went up like napalm. 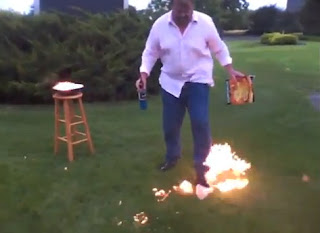 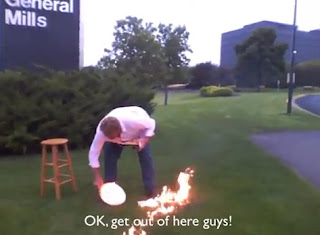 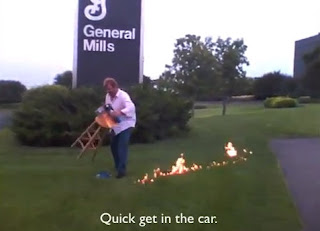 Which of course was my favourite scene. I was hoping the front of his pants would catch fire. So it would be like Moses and the Burning Bush, instead of the usual Sodom and Gomorrah. But you can't have everything eh?

Damn. Too bad about the video. But at least we know the bigot's name.

And where he's coming from:

On Michael Leisner’s YouTube page (Live4Chr1st) he can be seen attacking Representative Barney Frank and Bill Maher, while noting that President Barack Obama has “bent forward to accommodate the sodomites of New York.” He also makes reference to "gay perverts," "fierce faggots," and the "depraved, debasing debauchery of gay activists."

Aren't those religious hatemongers something? One moment they're klowns.

The next moment they're terrorists...

Video is back for now. Enjoy it while you can...

Dude is funny until you realize he votes that way. He's a sick, sick fuck.

He is wearing a pink shirt and has a lisp. I think he's projecting.

Dumber than a sack of hammers and even more pathetic when you think of the millions of Americans who follow this same crap and call it religion.

So which is more worrying:

1. Honey Nut Cheerios burns fast?
2. What is on their lawn that burns fast?

I just don't get these "christians" who go around preaching hate. They obviously haven't been reading their King James version of the Bible.

Of course we could say his little fire was god telling him not to do what he was doing. There is something in the bible about people being created in his image. I can only conclude god feels its o.k. to be LGBT.

OK buddy, there are how many important issues affecting the world? And yet you're burning cereal with a blow torch. Frankly, this guy blows. What an idiot. Way to make yourself look like a complete klown on Youtube, dumbass!

hi Thwap....true but think of it this way, with enemies like that who needs friend? ;)

hi anonymous....you would not be only one to think that. When one of my friends, of the gay persuasion, saw the video he texted me the following: WHO DOES THAT BIG FAT QUEEN THINK SHE IS?
But I being more refined, most of the time, can only say this: sexual repression is a terrible thing. And if you don't believe me just ask Jason Kenney.... ;)

hi bcwaterboy...true it is pathetic, and what is happening in Amerika is truly frightening. But as I told Thwap, bigots like that one only hurt their own cause. In fact I want MORE !!!!!! I feel like writing him a letter and asking him if next time he could wear a atraw hat, and hold the blowtorch in his mouth.... ;)

hi anonymous....I don't know the answer but all I can surmise is that he must have soaked the cheerios in gasoline, or the Pentagon is missing out on a frightening new weapon... ;)

hi e.a.f....as I've mentioned before although I am an atheist I know a lot of good Christians who believe in the message to love your brother and your sister, and needless to say I'm all for that. Those bigots are just phonies who are turning a message of love into one of hate. And for them I have no time....

hi Way Way Up....as I just told e.a.f. I know a lot of Christians who do things like care for sick people or feed the hungry. And I have a lot of time for them.But that ridiculous bigot is really the limit. And the worst thing is he's doing that jackass stuff in front of his own kids. Honestly, how low can you go?

The guy is dead, heart attack in his car...seems a natural cause of death.... wrong but no one will question the implication of corporation in his death and the fact that some chemicals can induce a heart attack...