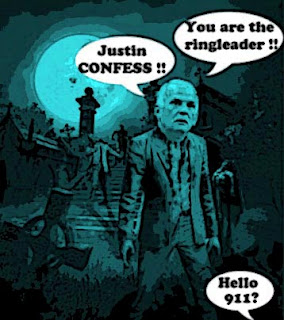 Uh oh. Call the zombie police. VicToews has stumbled out of his crypt and is going after Justin Trudeau. Again.

Vic Toews launched yet another Twitter attack against Liberal MP Justin Trudeau today, accusing him of orchestrating the embarrassing Vikileaks Twitter account after it was revealed the account’s creator was once again working for the Liberal Party.

And not only him, but the whole Liberal Party !!!!

“Justin Trudeau and all Liberal leadership candidates must come clean immediately...“Who knew about the sleazy Internet smear? What deal was struck with Adam Carroll to take the fall? Will they continue engaging in sleazy tricks and only apologize when they get caught?”

And after reading those tweets, and noting how he ended the second one by holding down the $$$ key, like someone really angry does, I'm now afraid for us ALL.

Because that's crazy stuff eh? Just think about it.

He still can't get over Vikileaks. He doesn't think Adam Carroll was punished enough... 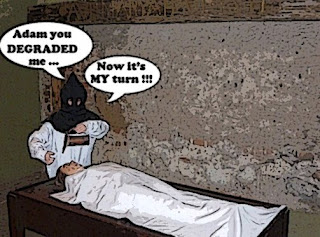 And the way he has gone after Justin Trudeau, who he apparently believes is the ringleader of some vast conspiracy, is downright CREEPY...

Now look, I am fully aware that Toews is an internet beast.

This is a politician who has become renowned among a small audience of Manitoba political junkies for sending out long, rambling, emails to his "supporters," in which he angrily attacks opposition MPs, journalists and anyone else with the temerity to disagree with him.

But that was before Toews discovered Twitter, a more immediate, pervasive and, we have come to learn, less thoughtful way of venting your most volatile thoughts the moment they burst into your skull. Toews slowly began to move from the innocuous to the abusive in his emails. He taunted the opposition, howled when they disagreed with him.

And that very late at night, when he is very angry, some of the things he writes are SCARY.

Horrifying stuff about how we need to jail even more young Canadians. 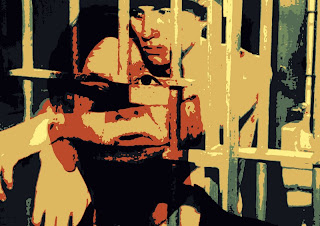 And why he's double bunking them with older convicts. Even though they could be raped.

Or how he revived the decaying corpse of Bill C-30, by giving it mouth to mouth resuscitation.

Because he MUST read our e-mails to find out who is in this vast conspiracy to humiliate him, and whether Justin Trudeau is the RINGLEADER. !!!!!!#@%#!

And all this would be bad enough if Vic Toews was an ordinary citizen, or even an ordinary M.P. But he's not. He's the Minister of Public Security, who is in charge of the RCMP and works closely with CSIS.

And by sending out creepy, vaguely threatening messages to opposition MPs, he is not only acting in a bizarre and deeply disturbing manner, he is threatening the very fabric of our democracy. 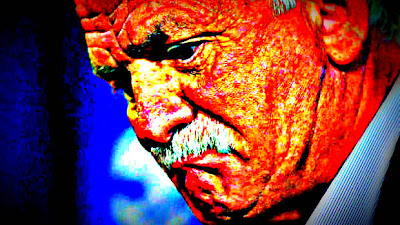 For one must really wonder whether he is still capable of differentiating between his enemies, real or perceived, and the enemies of Canada. And I honestly don't think he can eh?

I think he has become so unhinged by the Vikileaks revelations, and is so consumed by his desire for personal revenge, he has lost his pedals as we say in Quebec, and is now capable of ANYTHING.

Even of using the security forces at his disposal to wage war against his political opponents.

Yup. The old zombie has gone too far. The danger is all too obvious.

And for the sake of our public security, he must be fired immediately...

Vic Toews has a simple recourse if Adam was `smearing` him with something untrue. It`s called a libel suit.

Of course, Vic Toews won`t do that, because everything Adam posted about this moralizing `family values` hypocrite was true, and publicly available.

The Liberals` error was firing him in the first place.

Vic's babysitter would tell him to "grow up"

The Harper government is in a hell of a mess. Harper now has, Doctors, Lawyers and other professionals down his neck as well. Toews called Canadians pornographers. Oliver called us terrorists. Harper said, the NDP didn't want to fight the Nazi's. Even if there was no NDP at that time. Have a look at, Harper's Northern Foundation Party, from 1989...speaking of Nazi's.

Harper knowingly hired a, many times convicted criminal, Bruce Carson to work for him. And, Toews is complaining about Adam?

I do believe some of Harper's caucus, are getting a little upset with Harper and his dictatorship.

hi Bri...I completely agree with you. Not only was the info publicly available, Don Martin had reported on it in the National Post a least a year before. I remember because I wrote a post about it to underline the hypocrisy of the old bigot.
And yes I thought Bob Rae's response was far too deferential...

hi sassy...I had to try very hard not to include the babysitter. Not just because I'm trying so hard to be a better person, and Vic is such a bad role model. But also because it causes me to be conflicted. Every time I hear Toews posing as a saintly Sheriff I can't decide whether I want to vomit. Or LMFAO... ;)

hi anonymous...I wouldn't hold my breath about any of the sheep in the Con caucus getting uppity, because they are the most docile lambs this country has ever seen. They don't even write their own speeches, everything is written for them by the PMO. But yes the Harper government is in a hell of a mess, it's going to get worse, and I for one couldn't be happier... :)