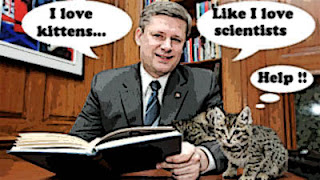 Good golly Miss Molly. Who needs Pussy Riot when we got Stephen Harper?

And could this possibly be true? Could he really be a changed man, as his new/old image would suggest?

Could he really have morphed into a Great Purry Furry Leader who now loves scientists, isn't going to force that nasty pipeline up B.C.'s behind, is going to tell our Chinese overlords to take a hike, and put politics before business?

Watching his shrugged-filled responses Tuesday, you’d almost swear Harper hopes to use the NEB for political cover to kill it instead of merely viewing it as a regulatory speedbump before his government’s ultimate approval.

Perhaps he’s recognized that hitching the key plank of his economic platform to a project bombarded by toxic opposition in B.C. could hurt him in this key electoral battleground. As Harper has proven time and time again, the only consideration that counts is the ballot box reaction to his government’s actions.

Hmmm... I suppose anything is possible when you have as many multiple personalities as Harper has. And his depraved lust for absolute power knows no limit.

But I very much doubt that he will give up his plans to build that pipeline by whatever means necessary.

Given the narrowness of its mandate — a mandate set by government — the National Energy Board panel charged with evaluating the Northern Gateway plan is almost sure to approve it.

This pipeline is going to be approved — and quickly — not because a bunch of boffins think it’s a sound idea but because Stephen Harper’s Conservative government wants the project approved. Period.

He'll just play Mr Reasonable, while counting on that narrow mandate to give him what he wants.

And if the N.E.B. and the scientists give him any trouble.

He'll make them an offer they can't refuse... 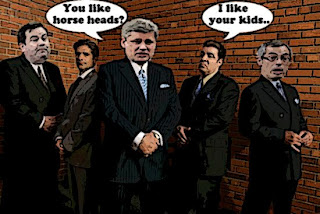 Because that's who he is, and he can't help himself.

As for the Nexxen deal if he nixes it, you can be sure he'll offer the Chinese half of Alberta, and free convict labour, to make up for that slap in the face.

Because in the end he doesn't really care what happens, as long as he can stay in power long enough to destroy government, shred the social safety net, deep six medicare, and steal your pensions.

Human Resources and Skills Development Canada, which runs Service Canada and manages the programs that get social services to Canadians, has posted a notice of procurement on a government contracting website seeking an evaluation of the programs' "cost-effectiveness."

Yup. If Canadians thought the last Trojan horse budget was bad, just wait for the next one. Last time they just took an arm or a leg, now they want our LIVERS.

So much for Great Furry Leader... 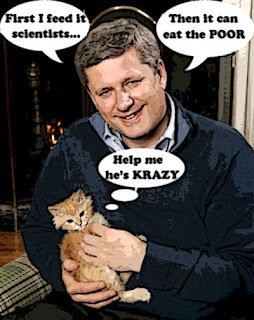 He doesn't  know what he's doing, he's making it up as he goes along, he's only in it for himself. But he WILL destroy Canada even if it kills us.

And the good news? The cuddly wuddly act won't cut it.

He's only purring because he's DESPERATE.

Canadians won't be fooled again, because they know a predator when they see one.

And the kitten got away...

I do believe stevie slime & the slimers will do what they want. His current comments are simply a ploy to throw people off. It won't work. People know who he is now.

Stevie slime is selling Canada to the first with the cash & dismantling our social system as fast as he can. he wants it to be comparable to China, because as their colony, things should be on par. It makes it easier for the chinese government corporations to operate.

China does expect trouble with having the pipeline & their bitamen companies because they had Canada sign an agreement which stipulates the Canadian government will pay the Chinese government companies for any looses brought about by anything this side of an act of god. Stevie slime signed it. I would suggest his thinking was if the federal government has to make good on looses because of protestors, etc. he can send in the military to protect Chinese/Canadian property.

hi e.a.f....I think Harper is in such a fix he doesn't know what to do. His grand plans are collapsing, he's in a lose lose situation and remember we're only a couple of months away from a new budget which I'm sure will make him even more unpopular. I need a La-Z-Boy and a large bucket of popcorn...;)