Stephen Harper: When the Bully is Beaten 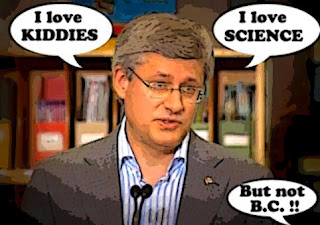 Well there he was in a classroom in Vancouver, in yet another tightly controlled phony photo-op.

Handing out E.I. benefits to the parents of sick kids, posing as Big Daddy, but still sounding like Big Brother.

Prime Minister Stephen Harper is defending the independence of the environmental review process underway for Enbridge's Northern Gateway pipeline, telling reporters in Vancouver the project will be evaluated scientifically and a green light to proceed would not be based on politics.

I mean can you believe that eh? When everyone knows that for the Con Regime EVERYTHING is political. It's destroying research stations all over the country, firing or muzzling scientists.

It has just imposed an arbitrary  deadline.

To prevent any more delays in the National Energy Board-directed study of the feasibility of the $6-billion plan to ship oilsands-derived crude through northern British Columbia, the Conservatives said the review must be completed by no later than December 2013.

Given itself the final decision.

The government also formalized new rules that for the first time give the Harper cabinet the final word on whether the pipeline should go ahead, even if the arms-length NEB-led panel concludes the project is environmentally unsound.

And today's brief photo-op ended with the hand of a PMO operative blocking the lens of a camera... 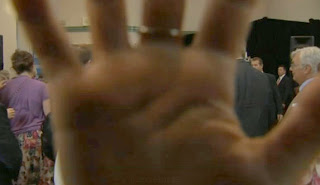 For they are thugs. And they must think we're fools. Who can be conned into becoming the slaves of foreign interests.

And the good news? It won't work. And I think even Great Ugly Leader understands that now.

Because I've rarely seen him look so awful and so BEATEN.

Like a ghastly bully who's just realized he's his own worst enemy. 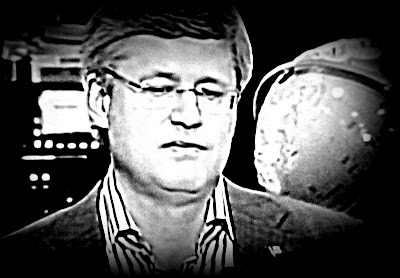 Harper’s hope was that this combination of toughness, smear and crass ideology — particularly if repeated endlessly in the right-wing media — would convince a big chunk of the broad Canadian middle. The strategy does, after all, work in the U.S.

But it hasn’t here. Public opposition to the scheme is so intense in B.C. that even the avowedly pro-business, governing Liberals have joined in.

His bullying has backfired. He's scared to get involved in the battle between B.C. and Alberta, because he can only lose. Global warming is becoming a bigger and bigger political issue. The Premiers are revolting. In Quebec, the separatists are using his policies to win votes.

In all of her speeches, Ms. Marois says Mr. Harper has attempted to impose values on Quebecers that most don’t embrace. These include a tough new law on young offenders, pouring money into building new prisons rather than daycare spaces and buying military planes and ships.

“I’m willing to make a deal with the Harper government,” Ms. Marois has said repeatedly in her speeches throughout the campaign. “I’ll trade him the royalty for Quebec sovereignty.”

The country is falling apart, and he can't do anything. Because he's not the solution, he's the PROBLEM.

And the best news of all? Sooner or later most Canadians will come to understand that horrible truth. Understand that Stephen Harper is not just his own worst enemy, he's Canada's worst enemy as well. And then it will finally be over.

The bully will be beaten.

And the tyrant will be toppled.... 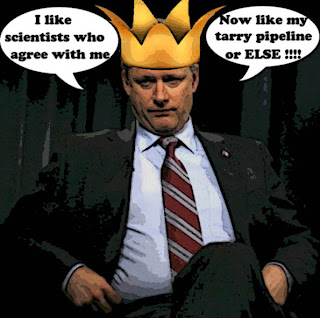 Dont bet on it. It will be a cold day in hell before Muclair gets in. No more Franco PMs!

Thomas Walkom has a good column today on the failure of Harper's oil pipeline strategy of bullying and vilification. Let's hope more and more people are seeing through this bastard's oppressive rule.

Stalin, Hitler, Mussolini and Harper, with their obsession to control everything, they got their dirty hands on, is the true mark of a dictator. They are so paranoid, the need for control is an obsession.

Harper doesn't work with you, he works against you. Harper dictates. He also had criminal, Bruce Carson working for him. Carson was just charged by the RCMP, for influence peddling. Harper knew that, he hired Carson anyway because, he was a criminal to do Harper's dirty work for him.

Same with ex BC Liberal Premier Gordon Campbell. Campbell has the dirtiest, most corrupt and foul political record, in the history of Canada. Harper rewarded Campbell, with the post as High Commissioner to England. Campbell too, did Harper's dirty work for him. Campbell's theft and corrupt sale of the BCR, is the sleaziest crime ever known in Canada. The trial, was an out and out farce.

The citizens of BC will fight Harper to the last ditch, to keep the Enbridge pipeline and the dirty tar tankers, the hell out of BC. Premier Redford has had three pipe burst, in her own province. She has the gall to try and force her, filthy, chemical laced Bitumen, onto BC and the people.

BC has been under siege by, the Campbell/Clark BC Liberals and Harper, far too many years now. The entire lot of them, are in the lowest form of the human species. Everything of value in BC, has been thieved and sold.

The BC citizens will fight Harper, right to the nth degree on the Enbridge pipeline. BC will not be a conduit for Harper, to give easy access to, Communist China's dirty tar sands oil.

There is a wall of shame web site, by the Alberta government. All the company's up at the tar sands are named, for not paying their workers. Communist China is the worst offender. There is a court case, over two Chinese workers that were killed. We all know about Communist China's human rights, there are none. AND, Harper is the s.o.b....who is selling Canada out to Communist China. Contractors are also having trouble, getting their money out of the Chinese too.

There is a write-up on MacCleans.ca web site. More than ever, BC must not permit Communist China, Enbridge, Alberta nor Harper, to use BC as a conduit to ship the dirty Bitumen to Communist China.

The Alberta Federation of Labour was interviewed regarding what it is like to have one of these Chinese companies dealing with the WCB. the Chinese workers were shipped back to China & they have refused to deal with the WCB telling them their offices were in China & to serve the papers there.

For Canada to permit Chinese government companies to buy up our natural resources is treason. Harper is simplying selling Canada to China. We have become China's latest colony, we just don't know it yet.

Bringing in workers from China is not good for the workers or Canada. these workers have no rights & can be removed to China at any time. If the workers were coming into Canada as landed immigrants it would be different.

Harper's legislation which makes it easier to bring in temporary foreign workers was designed for China. These workers can be paid 15% less than Canadian workers. Isn't that special. All a company has to say is they can't find a canadian worker & viola, visa for foreign workers.

Canada does not have a labour shortage. They have a shortage of schools to train people for the jobs. We have a huge First nations population of young people who are eager to work but they have difficulty obtaining an education. Stevie stlime would rather import workers.

if the Chinese government continues to import workers we will see a decline in worker wages in Alberta & more Chinese temp. workers being brought into the country.

You are of course a neo-con troll !

Steve's got tricks up his sleeve,
That surely make me want to heave,
He has a foul net that he want's to weave,
Which he sincerely wants us to believe,
That anything he childishly doth conceive,
Is something special we will not grieve,

Little does the dimwit know,
We all perceive him as the foe,
We all think its time for him to go,
His head is full of miscreant dough,
Which makes him more than a little slow,
The stupidity of those that elected this low blow woe Joe?

Stephen Harper you are nothing but a faux (:pas:).