Stephen Harper and the Con Army 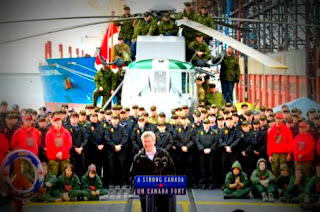 I see that Stephen Harper's Great Con Clown Tour of the Arctic, has ended with another phony photo-op.

And the ridiculous sight of Great Ugly Leader posing as the Lord Protector of the North.

"In an uncertain world, where demand for resources is growing, where any number of civilian needs can suddenly come upon us, and where conflicts and potential conflicts remain ever present, you, our men and women in uniform, are here to literally stand on guard for the True North strong and free," Harper said.

Even though he would destroy it in the name of Big Oil, or turn it into a blackened wasteland.

And he has done nothing to strengthen our military's ability to guard our sovereignty. For they don't have enough ice breakers to patrol our waters. Or even enough helicopters to rescue a lost kid.

The boy was reported missing Sunday night. A search and rescue helicopter was called, but RCMP Cpl. Kimball Vardy said it didn't arrive until Tuesday evening. 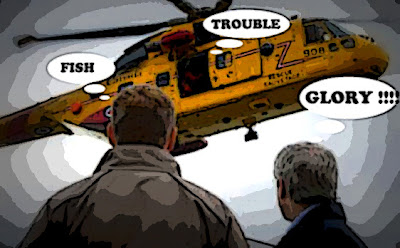 But they can spare a helicopter to take Peter MacKay fishing.

And Stephen Harper will do or say ANYTHING to make himself look like a "strong leader" of a "strong Canada." Even as he sells us out to foreign interests, and ignores the real needs of the  people who live in the north.

If the North’s “time has come,” as Harper said this week during his seventh annual trip to the territories, then some of the political spotlight must focus on its people, many of whom have the worst health outcomes, living standards and life expectancies in the country, and not just what is buried under northern rocks and tundra.

Great eh? No wonder they called it Operation Nanook.

The film is considered the first feature-length documentary, though Flaherty has been criticized for staging several sequences and thereby distorting the reality of his subjects' lives.

But here's the part that really disturbs me eh? Why would the military come up with such an outrageous scenario as an eco-tourist boat carrying illegal immigrants or refugees?

When it's so obviously taken from the pages of the Con's reactionary agenda. And the real enemies of the Arctic are not environmentalists and refugees, but drilling rigs, pipelines, and supertankers.

So why are Canadian generals always so eager to please the Cons?

Do they work for the Harper Regime, and its foreign friends? 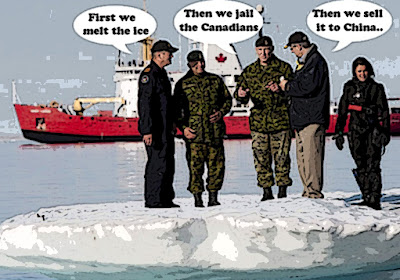 Are they a Con army or a Canadian one?

And if the people in British Columbia try to stop the Northern Gateway pipeline, will they defend their democratic rights, or treat them like The Enemy?

For in a country like Harperland those are questions that must be asked.

The Conservative government has quietly given Canada’s national police force and the federal border agency the authority to use and share information that was likely extracted through torture.

They have corrupted our Parliament, they have muzzled scientists and civil servants. Now they are politicizing the military.

What are they doing?

And where would this madman take us? 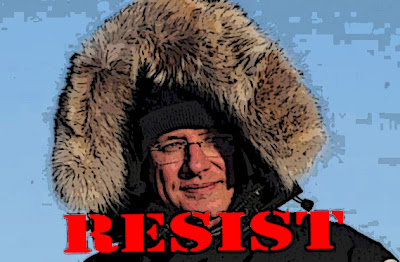 Jack here.
Does anybody remember the picture on the aircraft carrier of "the shrub" dressed up like Tom Cruise? This is sooo reminiscent of that photo op that it is hilarious! "Mission Accomplished" redux! And, yeah, it is now a "con army" because if they don't kowtow to stevie, he'll cut funding for all their toys so necessary to protect us from all the baddies out there! Simple, n'est pas?

I doubt the military would fire on Canadian citizens. Harper has treated our young military members, like dirt under his feet. Even dirt is clean, when it comes to Harper.

Harper will have to bring, his Red Communist China army over for that. Premier Redford, is also bringing war vets from the U.S. to Alberta. We are being called, eco terrorists AGAIN. We BC people have never threatened anyone. It is Harper, Enbridge and Alberta, who are terrorizing the people of BC. We just want to save our province from their greed.

I think if the Liberals were fined in the robo-call debacle. Harper should be forced to resign. The calls changing locations for voting venues, came from Harper's gang. Del Mastro solicited money from his cousins employee's. He promised and did return their money, with an added bonus.

Harper had Front Porch Strategies from the U.S. working for him, in 14 Conservative campaigns. P.G. Wenzel and Mathew Parker participated directly, working in the trenches for Harper, during his Federal campaign. Many robo-calls came out of the U.S.

Oh whatever, how little you know the CF. The current government is their boss, you know civilian control of the military and all that. When the Liberals disbanded the Airborne Regiment, there were some troopers who were ready to draw weapons and march on Ottawa. Should they have if they disagree with government?

I know more than a few guys who love to toss a grenade on a dias filled with Liberal and NDP big-wigs.....should they be allowed too because they disagree with the them? If the NDP becomes government can those with the government use their jobs to attack them from the inside too? Or can we only take direct action against governments that you don't like?

hi Jack...I actually toyed with the idea of putting a Mission Accomplished banner on that picture of Harper and the Nanook gang. But the more I looked at it, the more it reminded me of a Busby Berkely musical. So I then I thought maybe I should put a chorus girl in a bikini, with feathers, on either side of Harper. And then I gave up. I realize that generals in any army anywhere are always trying to impress their civilian overseers to buy them new toys. But I think some of our generals are going too far. This isn't a little jig, it's a full fledged mating dance. And you're right, the fact that we can't even properly patrol the boundaries of our nation, is because Harper and those generals think war is more glamorous, and can't get their priorities straight....

hi anonymous...I'm not saying or suggesting that the Canadian military would fire on its own people. What I am concerned about is that by constructing a war games scenario as absurd and political as they did, they are reinforcing the Con notion that environmentalists and refugees are a threat to this country. Who came up with that idea HQ or the PMO?
And what's next, the Chinese burrowing up from China?

hi anonymous...as I explained above I fully understand how the game works. And I'm not calling for direct action either. What I'm saying is that the premise of that Arctic exercise was more political than military. An assault on an eco-tourist boat... full of refugees... in the Arctic?
I mean think about it eh? It's absurd. And my other point is that the Harperites and our genius generals our to blame for this sad state of affairs, because instead of focusing on guarding our sovereignty, they are more interested in playing war with the big boys...
Finally, I want to make it clear, that I'm not calling the ordinary soldiers Cons, just their slavish bosses...

So, what would happen if Canadians did lay across the pipeline site, to stop the bulldozers? Even the top Scientists said they would do the same.

What did we see at the G-20? It was said, Harper was flexing his muscles. How many times have the cops been caught, trying to start fights at peaceful demonstrations? They had their faces covered, and refused to take them off. When they were accused of being cops, they slunk away. There are many dirty tactics, used by Harper.

I am not as sure as everyone else is. If there were a huge number of people protesting the Enbridge pipeline, that Harper wouldn't turn the military on them. We have already been called eco terrorists once, and again just the other day. Didn't you know 50% of Canadians are terrified of eco terrorism, by a very recent poll? We have already been threatened by an anti terrorist squads of the RCMP, by Harper and Oliver. The only threats I have heard, were made by Harper and Oliver threatening the people of BC. You accept the goddamn pipeline, or the terrorist squads will come and get you. Harper and Oliver are also targeting the environmental groups.

I had several members of my family in WW11. We have always been proud of our military, in my family. That hasn't changed to this day. I just have contempt for the idiots, that run the operations. God help us all, with Harper and MacKay at the helm.

Communist China has bee showing aggression around the globe. In Japan, the Philippines and in Russia. They have hacked into other country's secret files. The U.S. missiles and other weapons, had infected electronic components in them, purchased from China.

Why in the hell do you think, other country's are dead set against China buying Nexen?

No matter what it takes, Harper said, China WILL pick up the dirty tar Bitumen, in Kitimat Port. Trust Harper if you like. I wouldn't trust him, as far as I could throw a herd of Elephants. Most BC citizens don't. We put nothing past the likes of him.

Actually, the Tories have done quite alot for the CF, more than the Liberals did in the last 13. Some projects are on time or completed.

The senior ranks, like every other member of the CF has no choice but to play by the rules, there is the Code of Service Discipline after all.

Overall the CF is better off with the Tories in power. The other parties do not have the CFs interests in mind.

Most Arctic tourists I encountered in Nunavut were nothing more than rich gawking Americans and a few Brits.