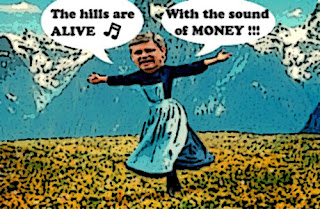 Holy Moly. For a moment I thought Stephen Harper was playing the good nun again in the Con version of the Sound of Music.

You know, the one where Jason Kenney plays the grim Mother Superior who beseeches the young nun to control her lustful urges, and Climb Every Mountain. Like he has.

But alas, it was only Great True North Leader giving painful birth to a new national park. While simultaneously, almost miraculously one might say, managing to screw the environment.

Stephen Kakfwi, former premier of the Northwest Territories is also disappointed with the way the boundary lines are drawn. "Unfortunately I think Prime Minister Harper has let down Canadians in his choice," he said. "That is not a national park, that is a joke."

He said the local people were put in a corner because it was either the smaller protected area than they desired, or no protection at all.

But then, as I've been reporting, Harpo's tour of the north has been a joke right from the start... 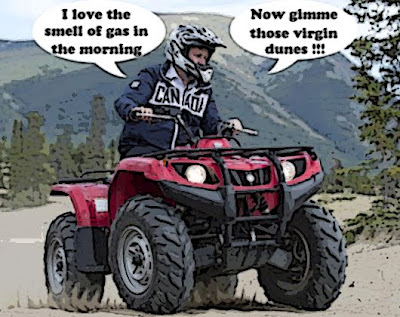 What with the phony photo-ops. And the environmental destruction

It's been a laugh a minute. And if you don't like one joke, there's always another.

The new Arctic research centre in Cambridge Bay, Nunavut, will give a boost to science and sovereignty, Prime Minister Stephen Harper says while announcing close to $200 million in funding.

Like the one where the Cons spend $200 million on a research centre to promote development, but don't have $1.5 million to keep this research station open.

Harper's funding announcement for the new centre Thursday comes soon after another research facility had to close its doors because of a lack of funding. The Polar Environment Atmospheric Research Laboratory (PEARL) in Eureka, Nunavut, was Canada's northernmost research laboratory.

The station, on Ellesmere Island, had been tracking ozone depletion, air quality and climate change in the High Arctic since 2005. Its research was used to detect and analyze the largest hole in the ozone over the Arctic ever detected last year.

Which also means that we will receive almost no data from the Arctic until at least the year 2017.

Oh boy. Now can we call them CANNIBALS? Again.

On Wednesday Environment Minister Peter Kent - a veteran broadcaster in his life before politics - succumbed to the subliminal powers of Leef's suggestion that Harper eats his own.

During Kent's introduction for Harper's national park announcement in Norman Wells, N.W.T. the environment minister repeated the gaffe when he too botched his lines: calling his boss "the prime minister of cannibal" for the second time this week.

OMG. Is this a klown government, an oil cult, or a Cannibal Club?

Gosh. I don't know. But until we can give those ghastly Cons the hook, I'd play it safe eh?

Give Great Cannibal Leader a bone, a Leef, or a Kent to chew on.

And give Great Klown Leader a tiny bicycle....

Well, it does kind of make sense that they'd call him a Cannibal. After all, Stevie tends to eat social programs.

Harper's tactics, are pathetically easy to see through. As if we all don't know why, the Northern Research Station was shut down? Why the top Canadian Scientists were cut? Harper has his own personal Scientists, to study the debacle of the tar sands. Harper has sunk, even lower than contempt.

Harper and his ranting, raving raving ministers are a litany of, lies, deceit, corruption, thefts, dirty tactics, dirty politics, and they certainly don't mind cheating to win. The number of his robo-call cheats have doubled. Harper is using more dirty tactics, to lie and cheat his way out of that one too. Same with the election riding disputes.

Harper wants to hurry and pollute the High Arctic as well. Can't do that, with a research station up there, now can he? Pathetic indeed. Cannibal indeed.

Harper has no morals nor ethics, what-so-ever. He reminds me of Putin and Hu Jintao.