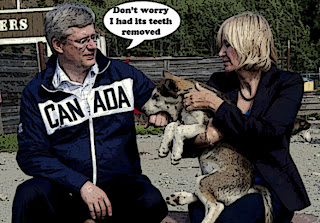 Oh. My. Doggy. I see Stephen Harper has begun his annual tour of the north with the first of many absurd photo-ops.

But at least this time the tour isn't about guarding our Arctic sovereignty, or defending it from the Russians, or stopping the ice from melting.

It's all about Big Oil.

Prime Minister Stephen Harper suggested Monday the pace of oil and gas development in the North could increase exponentially in the coming years and that could feed money into the local and national economies.

Or as Harper put it: “You ain’t seen nothing yet.”

Which is just as well since our sovereignty is as unguarded as it ever has been. And Great True North Leader might have trouble explaining this one.

Or why he believes that funding research is a waste of money, and the truth is inconvenient.

Documents filed with the National Energy Board show the environmental review panel studying the Northern Gateway project asked Fisheries and Oceans Canada for risk assessments for the bodies of water the proposed pipeline will cross. The pipeline is to traverse nearly 1,000 streams and rivers in the upper Fraser, Skeena and Kitimat watersheds. The department didn't have them.

Or whether he really believes that drilling in the Arctic is as easy as shipping oil out of Kitimat, as Enbridge apparently does.

And of course, the burning question:

Where others see disaster... 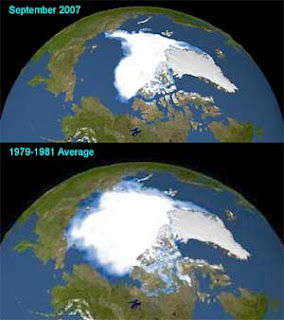 Does he see OPPORTUNITY?

And I think the answer is obvious.... 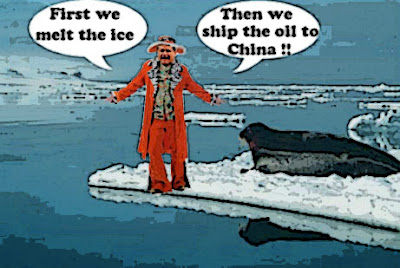 Gawd. If the husky and the big seal won't bite him, let's hope reality does.

Before it kills us all. 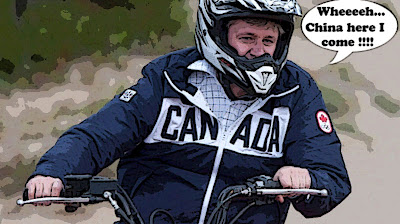 Or just the hook.

And give Enbridge a reality check...

Harper seems to be suffering in the later stages of dementia. Therefore needs to be removed from office to protect the world from his bitumen craze that is driving the thermometer into the realms of hell here on earth. He must be the anti-christ, as christ was supposed to be the embodiment of love and Harper is anti-love or just plain hate, he is.

Did anyone hear? There are eco terrorists on the loose again. Half of Canadians are afraid of attacks on the tar sands, and the Enbridge pipeline, or whatever. They are accusing environmentalists of eco terrorism. They are at the top of the hit list. The citizens of BC, are opposing the Enbridge pipeline. Harper and Campbell did a lot of evil to BC. All we have left is, the beauty of our province, woodland wildlife, and our beautiful marine life. For that, we are terrorists?

I have never heard of eco terrorism threats, from anyone or by anyone. However, it's Harper, his ranting raving ministers and Enbridge, who are the real terrorists. They are who is doing all of the threatening, the name calling and using every dirty tactic in the book.

What do you call a map by Harper and Enbridge, with all of the islands missing in the channel? I call that down right, disgusting lies, evil, deceit, corruption, dirty tactics and dirty politics. That's what you call it.

I agree Mogs. Harper, some of his ministers and Enbridge, need mental evaluations. They are obsessive, controlling, frantic and rabid regarding, the dirty tar oil. Right off their hinges or, not too tightly wrapped.

Harper is a traitor, selling Canada out to Communist China. Believe you me, there are other country's that think the same. They hate Harper, for his bullying and his hissy fits, when he doesn't get his own way.

Selling Canada out to Communist China, is a very genuine threat of terrorism and treason.

hi Mogs...he certainly does seem to be suffering from a bad case of bitumen brain. But it's also his vindictive personality. When Obama delayed the Keystone pipeline, he threw himself into the arms of the Chinese just to piss him off. Now that BC is daring to defy his pipeline, he's making it sound like he doesn't need anybody because he's got the north. It's insanity and it will lead us to disaster....

hi anonymous....Harper can try to accuse people who care about the environment of being eco-terrorists. But it won't work. Most people who oppose the out of control expansion of our oil industry are decent and peaceful. So he'll just make himself look even more sinister and crazy. If that's possible....;)

at the rate stevie slime & his slimers are going they are looking crazier & crazier. They would be so happy to change Canada into something like russia, but our putin wannabe will be puttedout when the next election comes along.

To see how much China has done for other countries where it is busily extracting natural resources look no further than African nations. Chinese corporations bring in their own workers, 34 thousand, don't worry about the enviornment, don't hire local people, don't pay decent wages, aren't concerned about health & safety for workers. stevie slime is really looking demented these days.


I agree I do not think I have seen Canadians pull together so much since the Pierre Trudeau flag indecent in the late 60's, it made us think about each other in a distant place yet sharing the same place as you? Canada was that great place. Now we are faced with an evil bastard that Mr. Tom Flanagan created the idiot Stephen Harper, unite and throw them out we have something much better here in Canada then they can consume. Are you with me?

I have a con in my riding in BC and can't wait to appear publicly to annoy him for being a turn coat, remember David Wilks? The little tiny liar...

He said on camera "I am opposed to bill C-38" in Revelstoke BC and the very next day he went 180 degrees in the opposite and stated "It, Bill C-38, is the best bill I've ever seen..." This my friends is what we are dealing with liars cheats and thief's in the night...

I am of the same persuasion as you, Harper did the Northern Enbridge Red Chinese [none of you Canadians better forget this FACT] Pipeline to piss off Mr. Obama President of the USA. Is Tom Flanagan proud? Not...

Stephen is already in liars hell and I for one do not want to join him...

Harper is insane and his brain has been hammered by Mr. Flanagan whose motives are Anti - Canadian ...

A stink f**k like Flanagan thinks we are all socialist commies, what? Where is his mother?

I suppose if I may, he pissed on her grave?