Big Daddy and the Quebec Election 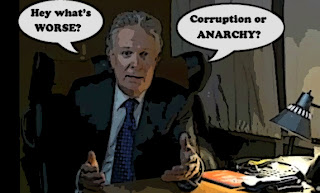 Well there he was the old smoothie, on day one of the campaign, sitting in his comfy chair in his big blue bus. The one with the slogan For Quebec.

Trying to explain in his Big Daddy knows best way, why he called a summer election.

Because you know, he's a good money manager, the Quebec economy is strong, but the situation remains fragile. We need stability, and the students are  The Enemy !!!!!!

“In the last few months we’ve heard a lot from a number of student leaders. We’ve heard from people in the street. We’ve heard from those who’ve been hitting away at pots and pans,” he said. “Now is the time for the silent majority to speak.”

And all I could think of was, is he really channeling Richard Nixon AND Stephen Harper at the same time? And how low has he fallen.

Once he was the golden silver bronze boy of the Progressive Conservative Party. Then he was almost Captain Canada. Now he's just the cynical old leader of a corrupt party, who would declare war on the youth of his province, to avoid further embarrassment.

The Liberals have been accused of favouring donors with perks and turning a blind eye to collusion in the awarding of public contracts. Part of the reason for the rush into a rare summer election is to avoid overlapping with a public inquiry into corruption in the construction industry, which resumes Sept. 17 and is expected to produce embarrassing revelations for politicians.

Because that's all this election is about. It's just a shabby little pantomime, where Jean Charest is hoping that when the students return to class later this month, they will resume their mass protests, so he can pose as a champion of law and order.

With a little help from the Montreal police.

Who are suddenly more numerous, and more aggressive than they have been for a long time.

Which explains why some are calling on the students to avoid playing into Charest's hands, and declare a truce.

Leader Pauline Marois is urging Quebec student leaders to call a truce on further strikes and confrontations for the duration of the campaign, hoping to stave off potential violence that could help Mr. Charest`s re-election bid. “It would certainly be good to hold a truce,” Ms. Marois said on Thursday. “I invite students and those who marched in the streets to march toward their voting booths on election day and send a clear message to this government.”

It's a difficult decision. Because none of the parties address the larger goals of this now popular movement. As one sign today said: Our dreams are bigger than your ballot boxes.

But since the protests died down a bit this summer, support for Charest's hard line position has plummeted like a stone, especially among French-speaking Quebecers who decide elections in that province. If the students declare a truce, he would be left lashing out at shadows, or blowing on the dying embers of past protests, and would likely end up toasting himself.

For a Big Daddy or a Big Brother who would declare war on an entire generation, to distract from corruption, must not be rewarded...

And when the election is over, never mind who is elected, the struggle for a better world, and against all Cons who would turn it into a jungle, will continue.

In the streets where it was born...

As you point out Simon, but a lot of people don't seem to recall, it was Nixon who first widely used the phrase "silent majority." interestingly enough, he used the phrase in the 72 election while the Watergate investigation was going on. And he won the election only to be driven from office later. Will history repeat itself?

hi Kirby....I have to admit I didn't know that Nixon had originated the phrase. But when I ound out I had to shake my head. Jean Charest channeling Richard Nixon it's just too much for me to handle. Curly really has hit rock bottom. Although, with the corruption allegations hanging over his government, even if he does win, I wouldn't be surprised if he does leave office like Nixon did And needless to say I'm hoping.... ;)