Stephen Harper and the Cannibal Country 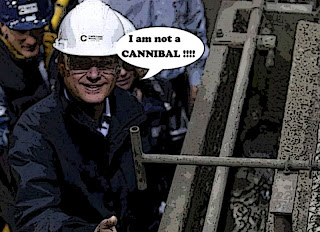 OMG. The horror, the horror. Is that Hannibal or Harper?

I was hoping that Great Ugly Leader's Tour of the North would be a total bust eh?

But who knew things could go so horribly, wonderfully, wrong?

Yesterday the critics were calling it a doggy circus.

Today they're accusing him of acting like an environmental hooligan.

And introducing him as the Prime Minister of CANNIBAL !!!!.

Because Harperland isn't bad enough eh? Now they want your E.I., your pension, AND an arm and a leg.

But of course the really scary part is that Harper is planning to do to the north what he has done to Alberta. Sell it out to foreign interests, and turn it into a poisoned wasteland.

“The North’s time has come,” Mr. Harper told a crowd of about 300 Conservative supporters at a rally Monday night. “I tell people starting to see the activity here, you ain’t seen nothing yet in terms of what’s coming in the next decade.”

Even as the planet burns, and the ice melts.

Arctic sea ice looks set to hit a record low by the end of the month, according to satellite data. Scientists at the US National Snow and Ice Data Center said data showed that the sea ice extent was tracking below the previous record low, set in 2007.

Even though the only way all those projects could be staffed would be to bring in hundreds of thousands of foreign workers, force unemployed Canadians to pick up a shovel. Or use convict slave labour.

The department hopes to recoup some costs by making inmates pay for using phones and pay more for daily room and board, while at the same time eliminating “incentive pay” for those working for Corcan – a Corrections Canada program that employs inmates in textiles, manufacturing and other trades to give them work experience while incarcerated.

And even though the net effect would be to turn Canada into a low-wage economy. Where the rich get richer and the poor get poorer.

But then of course, that's the Con plan eh? Everything else is a doggy circus... 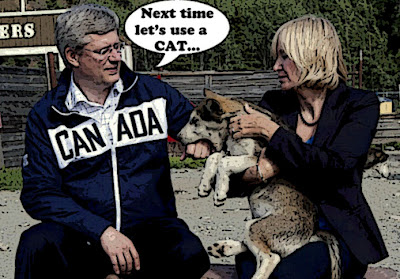 And the funny thing is that poor Con MP, who I sincerely hope is planning to apply to the Witness Protection Program, may have had a slip of the tongue. But in a sense he was prophetic.

If Great Cannibal Leader isn't stopped, the lights in this country will go out for a very long time.

We will live in poverty, in a poisoned desert, on a burning planet.

And end up feeding a monster... 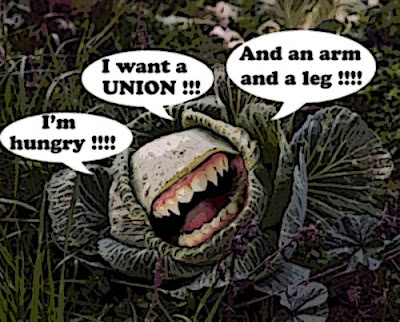 W/I criticize the u.s. for a lot of good reasons. One of the only things that I like about their political system is that they can impeach and remove from office a sitting leader (preznit to be exact)that is found to be unfit or working against the country's best interests. Is it too late to amend the Charter of Rights?

The number of the robo-call cheats have doubled. Harper is using every dirty tactic in the book as usual, to stop the investigation.

And by all means, let us hurry and pollute the High Arctic too. Big oil needs trillions more dollars. Communist China wants that oil too. I'm sure the Chinese workers will accept, the dirt cheap wages their country pays them. There are no Human Rights for the Chinese people.

Harper is a traitor to this country, committing treason. He is selling out the tar sands to Communist China. Harper permitted China to bring their own people to work their tar sands. Harper has said, China can bring thousand over, to build the Enbridge pipeline, on the cheap. China even gets the refining jobs.

That very same scene, will repeat it's self in the High Arctic too.

China is showing their aggression around the globe. Harper is stupid enough to help China to continue that aggression. There are more than just, furious Canadians angry at Harper. Other country's are livid with Harper too.

nothing good will come out of china being able to operate & extract Canadian resources. Canadian's won't be the job, Canadians won't make money on it, etc.

WE have only to look at China's involvement in various African countries where they are extracting natural resources. Nothing has improved in these countries. China brings in its own workers, 35 thousand at one count; they don't hire local workers; they don't train local workers; don't do much for the countries excpet make the rich, richer & destroy the enviornment. I can only conclude this is what stevie slime has planned for Canada.

hi anonymous...I know what you mean. I wish we did have an instrument like that to evict Cons like Harper or Rob Ford. However, I'm still hoping they'll be caught by the police doing something horrible, and be jailed before the next election...

hi anonymous...everything you say may be true, but as I've said before, we mustn't get angry we must get even.By making sure we do everything humanly possible to defeat the Cons in the next election.
For it's the only way we can stop them from drilling their way to disaster....

Ever heard the term "lame duck"? That's Harper only he does not know it yet...

The world and Canadians hate, I meant are repulsed by his behavior, I meant aghast, ooh I meant appalled or should I say righteously pissed off and offended by his childish antics, a country being run by a never grown up father hating juvenile delinquent?

That's Steve who loves to peeve us all off while mocking us.