The Cons and the Country We Could Have Been 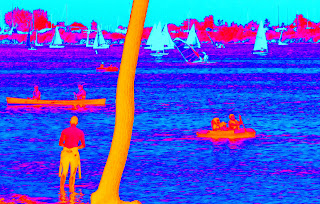 It was the first day of my holidays, and I couldn't wait to go sailing eh?

But when Seb and I got down to the lake it was so hot all I could do was just stand there.

Then dive into the cool water to try to escape the suffocating warm wind.

And wonder, as I floated over the broken beer bottles, what will it be like when the planet is really burning? And of course, what have we done?

These weather events are not simply an example of what climate change could bring. They are caused by climate change. The odds that natural variability created these extremes are minuscule, vanishingly small. To count on those odds would be like quitting your job and playing the lottery every morning to pay the bills.

And let him drag us into his oily world... 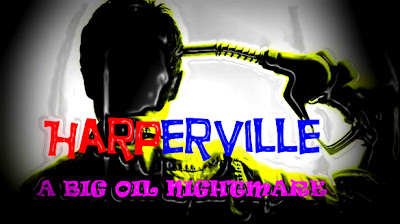 How could we have allowed those wretched Cons to torch the future in the name of Big Oil? Or lead us to eventual economic ruin, as the world races to get greener, as it gets hotter and hotter. And we are left behind.

A dependence on fossil fuel resources is making the country vulnerable to a planetary “mega trend” toward low-carbon energy that “will affect the whole of Canada’s economy...The country will need to further diversify its energy sources, ensure that it has secure access to global markets and find ways to meet the growing demand for energy at home in ways that are environmentally sustainable and publicly acceptable.”

It's so depressing because as long as Harper and his gang are in power nothing will ever change. And by the time the Con regime is defeated it will probably be too late.

But what hurts me the most is the thought of the country we could have been. A better, smarter country like Norway. Wealthy, progressive, and petro-smart.

And while some Canadian politicians dismiss Dutch Disease -- an oil-driven currency eroding manufacturing exports -- as a discredited theory, the Norwegian government has prioritized avoiding this economic malaise for decades by strictly investing their oil wealth outside of their country.

But never came even close,  because Alberta was too selfish, the Cons were the party of Big Oil, and too many Canadians were too greedy or too dumb. Or didn't wake up until it was too hot, too late, or reality bit them.

Which I guess at the edge of the searing abyss leaves Canadians with two choices. They can unite to drive the Harper Cons from power before they destroy this country, sell us off to foreign interests, and help destroy the world.

Or they can continue to live in denial. Pretend that global warming isn't happening, delude themselves into thinking that Stephen Harper is a great leader, and continue to believe that Canada is the best country in the world.

In that case may I suggest that they try to live near a large body of water like I do. So when it gets too hot, or they see a mosquito coming for them, they can dive for cover eh?

What else could go wrong?

Even if we took climate change out of the equation we would still be left with a very polluted world. One in which species are vanishing every day & land is being clear cut, lakes & rivers polluted, etc.

We can't always depend upon governments to make it right. We ourselves have to play a part. We can start by no longer running to the store each time a new iphone, ipad, computer, telephone, t.v. hits the market. These are the things which contribute to pollution & the destruction of the enviornment.

It is all well & good to go the easy route & ban plastic bags, but really, lets have a look at the bigger items we use like they were plastic bags & create a whole other level of pollution & garbage. The plastic bag thing is great for politicians but it really isn't the big issue.

How many people purchase "dryer sheets" for their laundry? Do we really need them, no. Scented laundry detergent, no not really. what type of chemicals are in those "room deoderizers"?

If we simply tried living with what we have until it no longer works we would find we had more money & the enviornment would be much better off. Do we really need a new computer every yr or so. Not really. They can go very nicely for 10 yrs, same with cars. cell phones, can last 5 yrs.

We have only to look at the amount of garbage sent to the land fills when houses are demolished or renovated each time the kitchen counters change colour.

Harper will go in due course. What we replace him with will be up to Canadians. In the mean time we can all look at what we do as individuals & curtail our consumerizme

"global warming is a scientific fact" from:

The denialists are dead "The conversion of UC Berkley climate skeptic, Professor Richard Muller, to global warming believer has rocked the denialist community. Muller's project took three years to prove the IPCC wrong and, instead, proved that the UN panel actually understated both the degree of warming and the role man made emissions played in causing it. Muller actually concluded that virtually the entire 2.5F warming since pre-industrial days was man made." from above link.

Now we have allot of work to do, being in Canada with the Harper government asleep at the switch we have even more work to do. I call on Stephen Harper and his entire cabinet to resign because of the fact they axed the climate scientists and shut down their various labs when Canadians needed them the most (treason). He did this in favor of a treasonous alignment with the RED CHINESE, DOUBLE TREASON Stephen you are a traitor whore of the worst kind now GET OUT.

Go to Red China where you and you ilk belong, you do not belong in Canada. Be gone Stephen. By the powers invested in me I ban you to Red China FOREVER>

hi e.a.f...I agree with everything you say. AndI do try to create as small a carbon footprint as possible. But we need people to be shocked into action, and a whole new approach to how we treat the planet, so we can preserve it for future generations. It seems obvious to me that at this point only a global revolution can save us...

hi Mogs...yes the Mound of Sound has being doing a great job of writing about the latest developments on the climate change front. The deniers have been dealt a blow from which they will never recover. After wasting so many years, for which one day they must be held accountable. But none of this will stop Harper from pushing ahead with his pipeline plans. The Chinese want our oil and he will do anything to please them. Even though as some economists have recently warned, the Chinese won't be able to carry us for long. They have their own very serious problems, and some big chickens are coming home to roost. The Harperites aren't just sellouts, they're IDIOTS....