Stephen Harper and the Teabagger 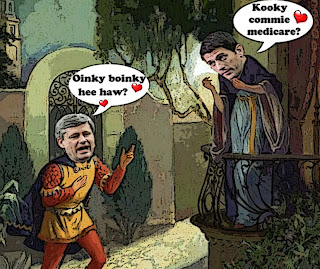 You have to believe that the duo of Stephen Harper and Jim Flaherty are salivating at the chance to work with a Mitt Romney/Paul Ryan White House.

Ryan is a supporter of the Keystone XL pipeline and has praised the Tories' decision to cut Canada's corporate tax rate to 15 per cent, pointing to the U.S. rate of 35 per cent as increasingly noncompetitive...And yes, like Harper and Flaherty, Ryan has 'Tea Party' tendencies.

And I have to admit, it's a marriage made in Con heaven.

They are both extreme right-wing ideologues, policy wonks who are out to destroy government, as their crazy cult leader Ayn Rand would have wanted.

Her vision was for a free society where the strong flourished and egoism ruled over altruism. In Rand's world, material achievement had spiritual value and unproductive citizens were "parasites," "looters" and "moochers". There are no state benefits, no national healthcare.

They are both determined to privatize medicare, bust unions, and cut benefits for seniors. And the only difference is that Ryan is in a hurry... 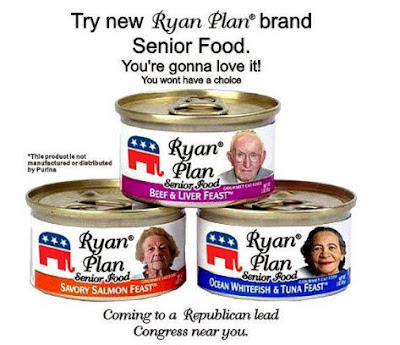 Paul Ryan has achieved fame with his grand designs for big immediate cuts to social spending; joined to restructuring of the federal Medicare and Medicaid programs; bolted to a big cut in the top federal income tax rate to 28%. The grand design is all to be enacted at once, in one big bang.

By contrast, there is no “Harper plan.” Harper has in mind a general direction in which he’d like to move: lower taxes, limited government, balanced budgets. But every step is incremental. Only at the end of a period of years does it become apparent how far he has moved.

Of course there are other differences between the two teabaggers. Ryan has the big smile of an easy going cowboy.

While Harper's smile is more...um...forced. 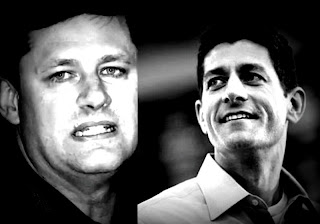 He’s the cutest package that cruelty ever came in...Who better to rain misery upon the heads of millions of Americans?.

He’s Scrooge disguised as a Pickwick, an ideologue disguised as a wonk. Not since Ronald Reagan tried to cut the budget by categorizing ketchup and relish as vegetables has the G.O.P. managed to find such an attractive vessel to mask harsh policies with a smiling face.

Ryan should stop being so lovable. People who intend to hurt other people should wipe the smile off their faces.

For they're both capable of putting their foul ideology before the lives of the poorest and the most vulnerable. Neither of them can feel the pain of others. And if they're not stopped they will turn both countries into a JUNGLE.

And the good news? Ryan's plans for medicare are sure to focus attention on Stephen Harper's plans to privatize it in Canada.

Canada’s premiers say the new federal health accord will gut nearly $36 billion in funding to the provinces over the 10-year deal and will erode public health services to all Canadians.

With a Romeo and Juliet love story like that one eh?

How can we lose?

People need to read: Harper gives a speech in New York, at the Council of Foreign Relations. This was Sept 25/2007.

All the border talks between, Obama, Harper and Calderon. And, their secret talks behind our backs. U.S. police permitted in Canada. Harper assisting and encouraging Canadians, to shop in the U.S. That's billions of lost revenue.

All of Harper's roads lead to, lies, deceit, corruption, thefts, dirty tactics, dirty politics and betrayal. Over 3/4 of Canadians know, Harper used the robo-call election scam, to win the election. Harper even had, a many times convicted criminal, Bruce Carson working for him. He also had Gordon Campbell, to do his dirty work for him.

yeah, you are so brilliant, playing your little musical instrument while the country faces turmoil. Are you going to fight for Canada, or sit there and continue to whine as rights in Quebec are eroded (unless you are pure laine)? Get off your useless toadstool and make a difference, Mr. Bluster.

hi anonymous...yes it is a deplorable record. When you write a list of their crimes against Canada it just goes on and on.
But I sense that the Cons are finally starting to crumble, and justice will not long be denied...

hi Chris...I thought I was fighting for Canada. If the country faces turmoil it's entirely the fault of our useless Con government. It has nothing to do with Quebec, and it's certainly not my fault. And yes maybe I am Mr Bluster, I'm just a blogger. But anything is better than remaining silent....

I hear Chrissy, whiny Chrissy, what is he doing? Besides blustering? You do bring to light important info Simon and that is a plus!